France will keep its president for five more years. But in spite of incumbent Emmanuel Macron’s win with 58 percent of the vote, on election night contender Marine Le Pen declared her vote tallies a “brilliant victory.” The leader of the far-right National Rally party explained that her 42 percent support meant that her party’s ideas were gaining momentum in France.

In 2017 Le Pen by comparison won 33.9 percent of the national vote, as the left and centrist parties joined forces to create a barrage républicain or a “republican blockade,” to prevent the far right from winning office. The same strategy was less successful this time around, with some party leaders calling for their party members not to vote for Le Pen, but stopping short of calling for votes for Macron. Notably, Jean-Luc Mélenchon, leader of the far-left party La France Insoumise—alternatively translated as Indomitable France or France Untamed—implied that he would cast a blank ballot and encouraged followers to do the same. He finished third in the first round of voting on April 10.

The first time Le Pen ran for president of France was 2012, when she came in third with almost 18 percent of the vote. In that run, and again in 2017, she ran as the candidate for the National Front, a party started by her father, Jean-Marie Le Pen. The elder Le Pen was a longtime controversial figure in French politics, known for statements downplaying the Holocaust and World War II war crimes. 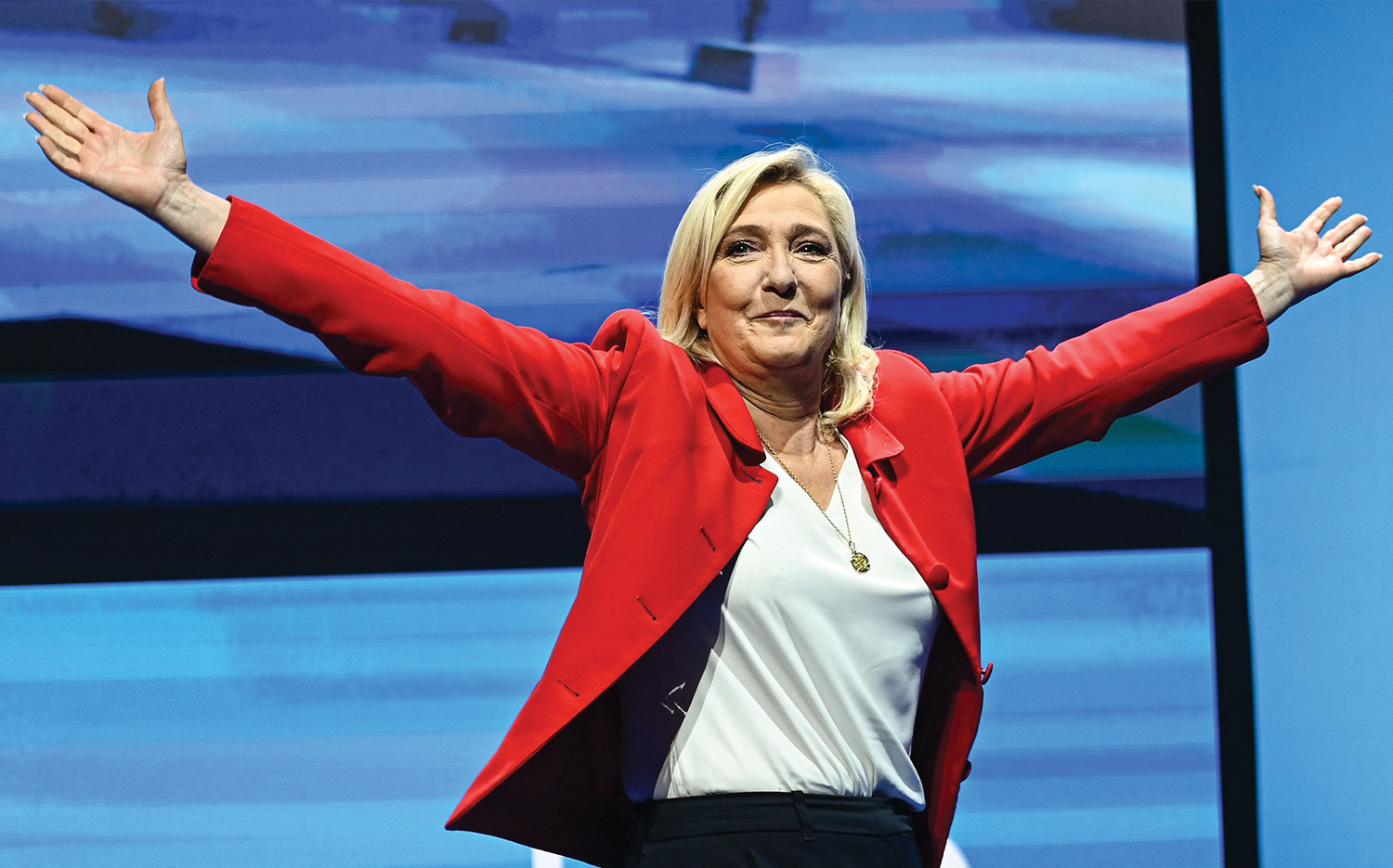 Marine Le Pen arrives to deliver a speech at a gathering with supporters. Christophe Simon/AFP via Getty Images

In 2015 Marine Le Pen ousted her father from the National Front party and began a movement to change its image, in 2018 finally changing its name to National Rally. She ended the party’s opposition to same-sex unions and unrestricted abortions and its support for the death penalty, while maintaining its anti-immigration and nationalist policies.

Le Pen has proposed a ban on wearing Islamic headscarves in public, which Macron called unconstitutional, saying such a law would be difficult to enforce and would also ban public wearing of other religious symbols, such as crosses or yarmulkes.

In 2017 Le Pen campaigned on a Brexit-style referendum on leaving the European Union, but she softened her tone in the most recent election cycle, calling instead for a looser EU with fewer bureaucratic regulations from Brussels. She said she would pull France out of NATO’s integrated military command and halt joint military exercises between France and Germany. Le Pen’s past approval of Russian President Vladimir Putin’s leadership was a detriment to her campaign, but while she condemned Russia’s invasion of Ukraine, she said that when the war is over, Russia could be an ally of France again, particularly against Islamist extremism.

With a new war on the European continent, such views proved too much for most French. But Le Pen’s trajectory over the past 10 years shows that her ideas are gaining traction. Oddly, while France’s overseas territories (Martinique, Guadeloupe, Reunion Island, and five others) voted for hard-left Mélenchon in the first round, they overwhelmingly supported hard-right Le Pen in the second, underscoring a voting tendency that was simply anti-establishment and anti-Macron more than about any particular platform.

Macron, in a reelection speech celebrating five more years in the Elysée Palace, acknowledged that many had voted not for him but against his opponent. He promised that he would be the president of everyone and that he would address the reasons Le Pen’s candidacy appealed to many, including decreased purchasing power and inflation. Macron also vowed to address high rates of abstention, particularly among younger voters. In the second round, 28 percent of voters abstained, while 8.6 percent voted blank or invalid ballots.

For now, French political sights are set on the legislative elections in June, where both Le Pen and Mélenchon hope to gain enough support for their parties to deny Macron a ruling majority in the National Assembly. Critics say that will be an uphill task for the parties in question, which are based more on personal brands than platforms.

While during the campaign Le Pen hinted at retirement should she be defeated again in a presidential bid, supporters now say the recent vote tallies may change that. The day after the election National Rally party chief Jordan Bardella declared, “If every five years we gain 10 percentage points, we’ll make it next time!” Emmanuel Macron has five years to change voters’ minds.