BOOKS | Authors delve into the history and reliability of the Bible

Be it a spoon or a pencil, even a simple manufactured item has a complex history. Complexity orders the created universe, from skin cells to the rings of Saturn. No one should expect the history of the Bible to be any less involved, though skeptics argue otherwise: How could the Bible be the inspired Word of God after 3,000 years of copying mistakes, translating errors, and inconsistencies? Professors John D. Meade and Peter J. Gurry tackle that question in Scribes & Scripture: The Amazing Story of How We Got the Bible (Crossway 2022).

In scholarly but accessible language, supplemented by helpful illustrations and charts, the authors walk the reader through three major sections addressing text, canon, and translations. Part 1 begins with early writing techniques to explain how the original text may have been written and copied. Textual criticism, though it may ring alarm bells to the layman, is vital to evaluating the notorious “variants” in Scripture, but believers can be assured that slight variations don’t alter the meaning of the text. Even more problematic ones, such as John 8:1-11, missing from the earliest manuscripts, can be acknowledged without damage to the message. 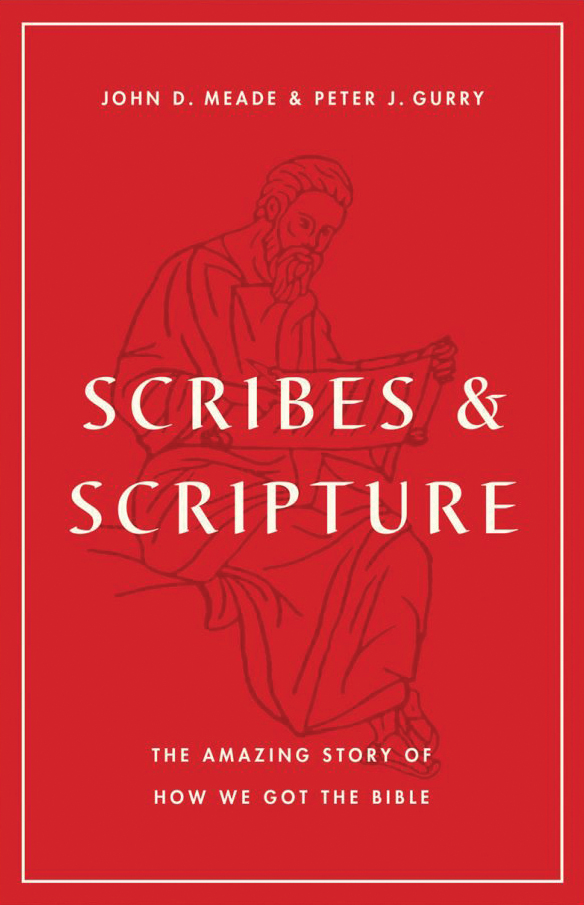 Part 2 of Scribes & Scripture addresses how an impressive number of manuscripts and segments were sorted into the Old and New Testament canons. In Part 3, dealing with translations, Jerome receives credit as the first to give the original Hebrew precedence over the Greek Septuagint and one of the first to prefer “thought for thought” translation over “word for word.” Protestants may be surprised to learn that the Catholic hierarchy was not uniformly opposed to vernacular ­versions of the Bible: Many Italian, French, and German translations appeared during the late Middle Ages. Tyndale is the hero of English translations, not only for his martyrdom but also for his immense influence on the translations that followed.

“The Bible’s inspiration was an extraordinary new event fed into God’s ordinary way of working in the world.” That work continues: Scribes & Scripture begins with the story of Mary Jones, an unremarkable Welsh girl who saved her meager income for six years and walked 25 miles barefoot to purchase her own copy of the Bible. It ends with D.J. Ward, an unremarkable American boy who, after professing faith in 1952, pieced his first Bible together from pages left behind in his local church. Near the end of his 40 years as a pastor, Ward preached a sermon on the question, “Do you love his word?” Knowing its history should help us love the Bible all the more.