One year from now we face a presidential election that may hinge on economic developments. David G. Blanchflower’s Not Working: Where Have All the Good Jobs Gone? (Princeton, 2019) points out that a high stock market and low unemployment still leave many workers underemployed or giving up. Blanchflower is mostly right that “the young are not striking out on their own and there is a storm of fury building,” but his suggestions—more government spending, creating a “universal basic income” dole—would probably worsen our plight.

In Becoming Whole: Why the Opposite of Poverty Isn’t the American Dream (Moody, 2019), Brian Fikkert and Kelly Kapic say “work isn’t a necessary evil that we have to endure.” Rather, “we are hardwired for work” in this life and in the next: The Christian should look forward not to becoming “a harp-playing ghost forever,” but to having work of some kind that will not be frustrating. This theological understanding has implications for poverty alleviation: Five times Fikkert and Kapic write, “Poor people need work that pays.” In short, universal basic income plans are wrong because they may fill financial needs but not spiritual ones.

Bruce Deel and Sara Grace’s Trust First: A True Story About the Power of Giving People Second Chances (Optimism Press, 2019) at first glance seems to suggest that if we aren’t suspicious of homeless and other troubled people all will be well. A second look reveals a deeper mystery: Deel, who created Atlanta’s City of Refuge nonprofit, acknowledges that “long ago I stopped trying to figure out whether a lady would succeed or fail. … Many ladies who I thought had no chance at success are now well past their struggles and are leading productive lives. Many others I thought would thrive in our environment lost the will to battle on.” So, trust may come first, but challenging, personal, and spiritual help is essential.

Winners Take All: The Elite Charade of Changing the World by Anand Giridharadas (Knopf, 2018) pulls back the curtain on high-tech executives who “regularly speak of themselves as liberators of mankind.” This new 1 percent has cultural as well as financial power: The winners are patrons of “thought leaders” who confirm their liberal worldviews in tightly scripted 18-minute TED talks that have replaced challenges from “intellectually meandering thinkers.” The thought leaders at the Aspen Ideas Festival and similar venues are “sidekicks of the powerful—buying parkas in the same Aspen stores … accepting the same intellectual taboos.” 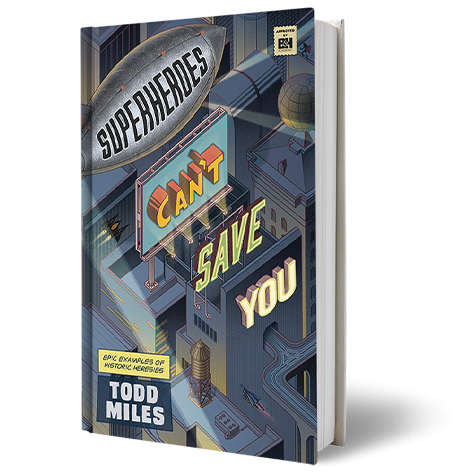 Kevin DeYoung’s Grace Defined & Defended (Crossway, 2019) explains the 17th-century Canons of Dort. Superheroes Can’t Save You by Todd Miles (B&H, 2018) is a clever way to explain ancient heresies like Docetism (Jesus is not really a man, and neither is Superman) or Eutychianism (Jesus is part man and part God, a mixture like Spiderman). Gender reassignment surgery also doesn’t save people, and J. Alan Branch’s Affirming God’s Image: Addressing the Transgender Question With Science and Scripture (Lexham, 2019) makes an excellent gift to anyone about to make or countenance a big mistake.

Bill Gertz’s Deceiving the Sky: Inside Communist China’s Drive for Global Supremacy (Encounter, 2019) says the new Cold War is well under way, and the United States is losing to a 21st-century empire even more evil and dangerous than the Soviet Union. The Reluctant Witness by Don Everts (IVP, 2019) has good, practical advice for introverts like me who are unlikely to start spiritual conversations with those in the airplane or bus seats next to us.

B&H is publishing a series of “Selections From Spurgeon’s Library” with selections from books that the great Reformed Baptist preacher thought worthwhile. The one titled Suffering (2018) includes comforts like this one: “Consider that your affliction, however heavy it be, will soon have an end. … The goldsmith will not let his gold lie longer in the furnace than it is purified.” —M.O.