After a closed-door trial the day after Christmas, a court in Chengdu, China, on Monday sentenced prominent house church Pastor Wang Yi of Early Rain Covenant Church to nine years in prison. His crimes: inciting subversion of state power and operating an illegal business. The sentence comes more than a year after Chinese authorities cracked down on Early Rain Church on Dec. 9, 2018, breaking down the doors of church members’ and leaders’ homes and arresting more than 100 people.

This is the longest prison sentence handed to a house church pastor in more than a decade, according to Bob Fu of ChinaAid. The sentence signals the Chinese government’s increased crackdown on Christianity and its fear of Wang’s influence in the Chinese church. Authorities also stripped Wang of his political rights for three years and seized $7,200 worth of assets.

“This is a pure case of unjust religious persecution against a peaceful preacher of a Chinese Reformed church,” Fu said. “This grave sentence demonstrates [President Xi Jinping’s] regime is determined to be enemy to the universal values and religious freedom.”

Authorities have released all Early Rain members except for Wang and Qin Defu, an elder who was sentenced to four years in prison for “illegal business operations.” Officials continue to monitor and harass the released believers and have sent some back to their hometowns. Those who remain in Chengdu continue to gather in homes for weekly services.

Titus Wu, a church leader at Early Rain, said he and the other leaders felt a mix of emotions upon hearing Wang’s sentence: relief that the sentence wasn’t longer, anger at the injustice of the ruling, and grief for Wang’s wife Jiang Rong and son Shuya, who will spend his teenage years without his father. Wu (whose name WORLD has changed for security reasons) said they also felt encouraged that Wang had stood firm in his faith while imprisoned. It caused them to reflect on how they can serve God more fervently over the next eight years until Wang’s release. 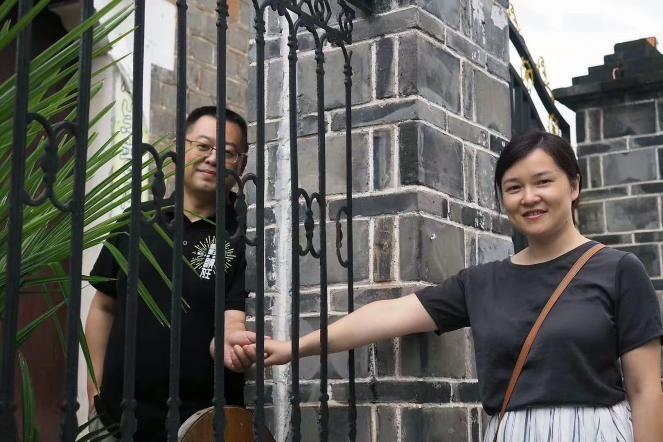 Pastor Wang Yi with his wife Jiang Rong in a photo taken before his sentencing. Pray for Early Rain Covenant Church/Facebook

“The whole church will be in the wilderness to be tried and to find hope,” Wu said. “The people have more time to reflect on what is the gospel: Does this show the gospel’s defeat or the gospel’s triumph in the darkness?”

An official statement by the church stressed Wang had not committed any crimes: Christian books that Early Rain had printed, at issue in Wang’s trial, were used for pastoring the congregants and for evangelism rather than profit, thus debunking the charge of “illegal business operations.” At the same time, Wang had often preached that “Christians should submit to authorities in power in accordance with Scripture” and had never done or said anything that amounts to “inciting to subvert state power.”

The U.S. State Department called for Wang’s immediate and unconditional release, noting that the Chinese Constitution guarantees religious freedom for its citizens. “We are alarmed that Pastor Wang Yi … was tried in secret and sentenced to nine years in prison in connection to his peaceful advocacy for religious freedom,” State Department spokeswoman Morgan Ortagus said in a statement. “This is yet another example of Beijing’s intensification of repression of Chinese Christians and members of other religious groups.”

Wang had long prepared himself and his church for coming persecution, aware that speaking out and pushing boundaries would make the unregistered church a target to authorities. With a goal to operate openly and help develop the Chinese church, Early Rain worked with like-minded churches to create a seminary, a classical Christian school, a liberal arts college, and a presbytery. It ran ministries to the marginalized in society: legal petitioners, families of political prisoners, the unborn, and women in crisis pregnancies.

While other churches feared addressing sensitive topics from the pulpit, Wang held annual prayer meetings to mark the anniversary of the 1989 Tiananmen Square massacre. He spoke out against President Xi’s increasingly dictatorial rule and penned a petition with fellow house church pastors against the government’s oppression of churches. Signed by 439 Chinese pastors, the petition stressed that when the government’s law contradicts the law of God, Christians would follow God. “For when churches refuse to obey evil laws, it does not stem from any political agenda; it does not stem from resentment or hostility; it stems only from the demands of the gospel and from a love for Chinese society.”

Sitting in Wang’s church office in February 2016, I listened as he described his conversion and the journey of Early Rain. At that time, the government had allowed the church to grow unimpeded since kicking the congregation out of its rented space in 2009. However, Wang realized the calm wouldn’t last for long, and he had prepared his heart.

“If [the Chinese government] wants to crack down on China’s churches, then most likely we will be a target,” Wang said. “They would want to crack down on a church that is more influential and open so that everyone knows winter is really coming.”

He noted that other house churches had followed in Early Rain’s footsteps, becoming more open, meeting in office buildings, and even buying office space to make it more difficult to get kicked out. The Chinese government would consequently want to make an example out of Early Rain, Wang said.

“This is what we knew would happen when we decided to be more open in doing ministry: We did it as a service to the entire Chinese church because there always has to be someone walking in front to test the waters for others.”

Early Rain leaders planned how to respond if the government cracked down on the church, and Wang penned an open letter to be released in the event of his arrest. Two days after the crackdown last December, the church released the letter, titled “My Declaration of Faithful Disobedience.”

“Separate me from my wife and children, ruin my reputation, destroy my life and my family—the authorities are capable of doing all of these things,” Wang wrote in the letter. “However, no one in this world can force me to renounce my faith; no one can make me change my life; and no one can raise me from the dead.” 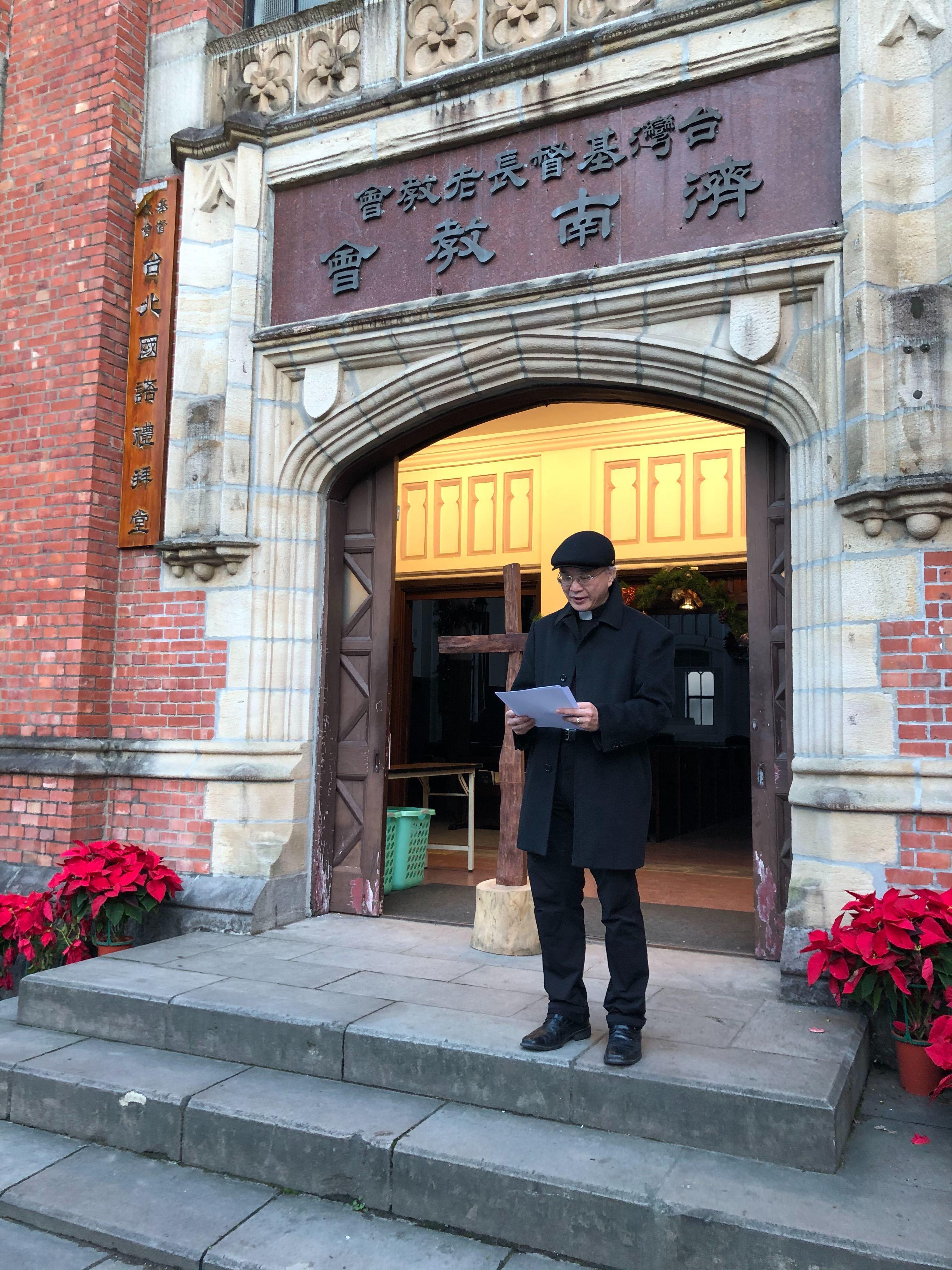 Pastor Wang Yi with his wife Jiang Rong in a photo taken before his sentencing. Pray for Early Rain Covenant Church/Facebook

At Chi-nan Presbyterian Church in Taipei, Pastor Huang Chun-sen stood in front of the red brick church and read aloud Wang’s “Declaration of Faithful Disobedience” to a dozen Christians. He ended the meeting with a prayer: “We want to testify that the wicked worldly powers are not ultimate, but there is another kingdom—God’s kingdom—whose power is ultimate,” Huang said to a smattering of amens. “God, we implore you to bless this world. May those in power follow God’s righteousness. … May Your will be done on earth as it in heaven.”

Over in Hong Kong, about 100 Christians gathered outside Chinese Methodist Church in Wan Chai amid a New Year’s Day protest that drew more than 1 million people. With the smell of tear gas and the shrieks of police sirens in the air, and with protesters running past to escape riot police, the Hong Kong pastors prayed for their brothers and sisters in mainland China.

“A group of us pastors and believers in Hong Kong are furious over the news of Wang’s sentence,” said Pastor Wu Chi-wai of the Hong Kong Church Renewal Movement. “With no regrets or fear, we are willing to walk alongside Pastor Wang Yi. … It’s dangerous to follow Jesus Christ today, but in spite of this, we still go on.”

Ken Wong, a 30-year-old teacher who attended the prayer meeting, wondered if Wang’s case foreshadowed what Hong Kong believers could experience. “[Will] Hong Kong become like that too?” he asked. “I don’t think anyone who is exercising their basic right of religious freedom should be sentenced to prison like that—even one year is too many.” —by Erica Kwong and June Cheng