Long before migrant caravans began overwhelming the southern U.S. border, Tijuana Pastor Gustavo Banda Aceves had a dream. He says he dreamed of a black man who spoke fluent Spanish, leading a large group of other black folks into Banda’s church.

At the time, he was on vacation in Mexico City and hadn’t heard the news that waves of Haitian migrants had been arriving in Tijuana, where he’s the founding pastor of La Iglesia de los Embajadores de Jesús (Ambassadors of Jesus Church).

When Banda returned home, he asked his church leaders if they had seen foreigners in town. Yes, they replied: Throngs of people of African descent were crowding the San Ysidro Port of Entry, asking for admittance into the United States. Their dark skin and foreign languages stuck out in an area that once saw very few black people.

Banda sent some church members to the border to look for a Spanish-speaking black man. One Sunday morning, they rang him and said, “Pastor, we’ve got a big problem.” They had found a Haitian man who spoke Spanish, but all of the man’s Haitian friends wanted to visit his church. So Banda sent out two pickup trucks to pick them up, and when those weren’t enough, he sent three more.

That Sunday, more than 100 Haitians stood in his church sanctuary, worshipping among his Mexican congregants. Banda preached while the Spanish-speaking Haitian man, Hosea, interpreted his sermon into Creole. After the service, Hosea (who has since been deported back to Haiti and now resides in the Dominican Republic) told Banda’s congregation that ever since they arrived in Tijuana, he and his Haitian community had been holding services on the streets because they couldn’t find an evangelical church. They had been praying for one when Banda’s church members appeared with trucks. 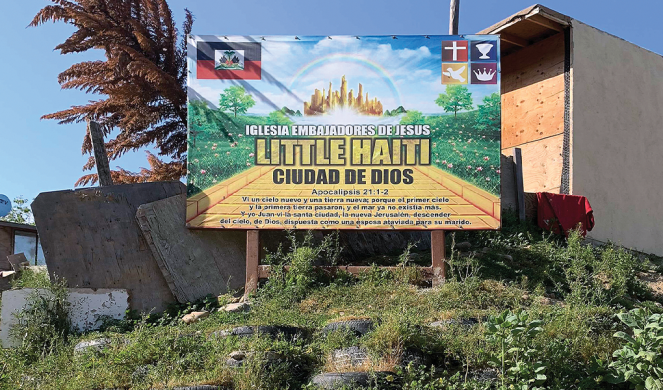 Since then, Banda has been opening up his church to migrants from all across the hemispheres—first the Haitians, then families and children from Honduras, El Salvador, Guatemala, Nicaragua, Venezuela, and the Dominican Republic. They slept on the floors of the church sanctuary over blankets and cardboard, then as more migrants moved in from Central America, nonprofits donated tents and sleeping bags. At one point, 500 migrants squeezed into the church building.

Local residents have welcomed the Haitians, calling them ‘peace-loving’ and ‘law-abiding’ folks

Most eventually left to seek asylum in the United States—but as the legal pathways closed for Haitians, thousands of Haitians decided to settle in Mexico, and in 2017, Banda donated a piece of land by his church to the Haitians to build their own community. They call that area “Little Haiti,” and some Haitians now call themselves “Haitijuanenses,” a quiet indication that they’re accepting an identity of belonging in a city they had not planned to call home.

Today they work as welders, assembly line workers, hotel cleaners, cooks, mechanics, construction workers, fruit peddlers, and car washers. They learned Spanish, opened restaurants and beauty parlors, enrolled in university programs, and even formed their own soccer leagues to play against local teams. Some earned enough to buy cars and move into their own houses and apartments. Dozens have married local women and given birth to Haitian-Mexican babies and earned permanent residency in Mexico.

These people came seeking the American Dream, but instead found the Mexican Dream—and the majority have adjusted well enough that locals are now hailing them as a “success story” of first-generation immigrants. 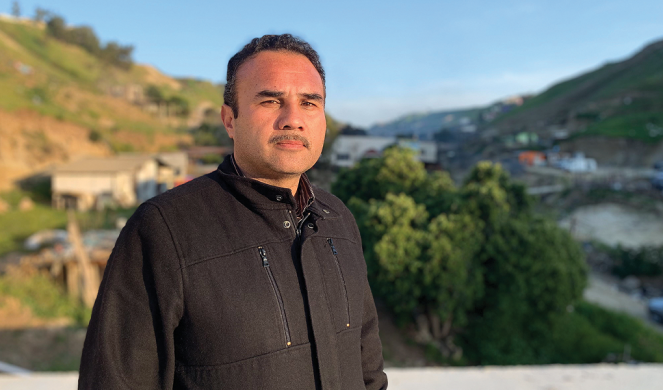 IN 2016, a year before migrant caravans from Central America began grabbing international media attention, Haitians made up the first surge of migrants lining up at the U.S.-Mexico border. After a devastating earthquake hit Haiti in 2010, displacing about 1.5 million people, the U.S. Department of Homeland Security granted Haitians temporary protected status (TPS), a policy that provides temporary legal status to migrants fleeing political, civil, or natural disaster in their countries.

As a result, more than 58,000 Haitians applied for TPS in the United States, while tens of thousands more migrated to Brazil, which offered plenty of jobs in preparation for the Olympics and the World Cup. But when the economy turned sour in Brazil, Haitians decided to migrate again, this time to the United States. Many planned to join family members living in the United States. They used most of their savings to reach the border, taking any means of transportation to make the 6,000-mile-plus journey—by foot, bicycle, horse, bus, car, boat, and/or plane.

Then in September 2016, the Obama administration announced that it would stop issuing TPS to Haitians, warning that those who try to cross the border would face deportation. At the time, more than 40,000 Haitians were already en route toward the U.S.-Mexico border—and once they arrived, they faced two options. One: cross the border and face swift deportation back to Haiti, where living conditions were still terrible. Or two: stay in Mexico, where jobs were plentiful. Mexico offered them renewable humanitarian visas and work permits. Many accepted, and today more than 2,500 Haitians are living in Tijuana. 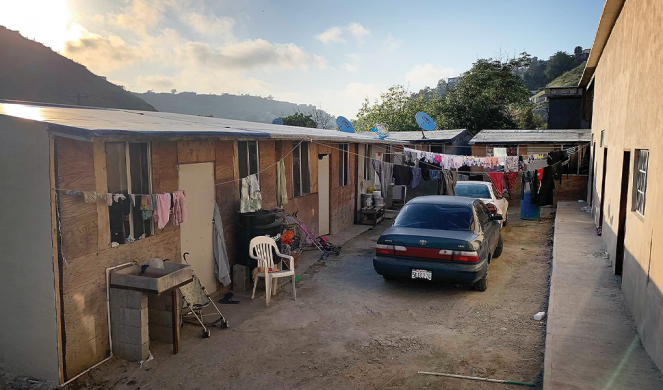 So far, local residents have welcomed the Haitians, calling them “peace-loving” and “law-abiding” folks. Banda was one of the first evangelical pastors to offer his church as shelter to the migrants. He built his church in 2011 with hopes to foster a community in which people from various tribes and tongues could come together to worship God—and he chose to build that church in one of Tijuana’s poorest neighborhoods—Cañón de Alacrán, or Scorpion’s Canyon.

Eight years ago, these canyons saw little activity save for some grunting, mud-splotched pigs and fly-swatting horses. The unpaved road leading up to the church is so bad that vehicles have to crawl at a steady 5 miles per hour, grinding and bumping over sun-baked mud and rocks.

The inner roads of Scorpion’s Canyon are still terrible, but now children from all over Latin America and the Caribbean hop and dart around pigs and roosters while their parents hand-wash clothes and stew beans in a giant pot. Haitians don’t care much for tacos, so they set up their own campfire on top of hot rocks and wood, simmering a whole trussed-up chicken and some rice. An aroma of meat and coconut filled the cool evening air.

There up on the slopes, about two dozen Haitians live in a tiny U-shaped compound of eight plywood houses, a communal bathroom, and a kitchen/dining room area. In between the houses, someone had parked a dusty green Toyota Corolla under washing lines fluttering with wet clothes. Perched on a little hill made of stacked tires and dirt, a big sign reads, “Little Haiti: City of God.”

John Constant, 32, shares one of the wooden houses in Little Haiti with two other single men. Their room is bare and crude, with concrete floors and pallet walls and the organic odors of wild pigs. Each man sleeps on a twin-sized mattress raised on top of bare concrete bricks, leaving just enough space in the room to squeeze in a small fridge, a rough-shaped table hammered together from wooden planks, a gas burner, a broom, and a crate stuffed with eating utensils and condiments.

When Constant first arrived in Tijuana in December 2016, his plan was to join several family members in Miami or New York, but he couldn’t find any legal means to enter the United States, and he didn’t want to risk deportation by crossing illegally. So he stayed, and now he works at a furniture factory, earning 1,500 to 1,800 pesos ($80-$95) per week—very low wages, but enough to get by and send some money back to his family in Haiti. Life in Tijuana is better than Haiti, he said, but he sorely misses his family, and his Spanish still needs some improvement. But he sees a future for himself in Mexico: He plans to move into his own apartment one day, or own a home, and perhaps marry a nice girl. 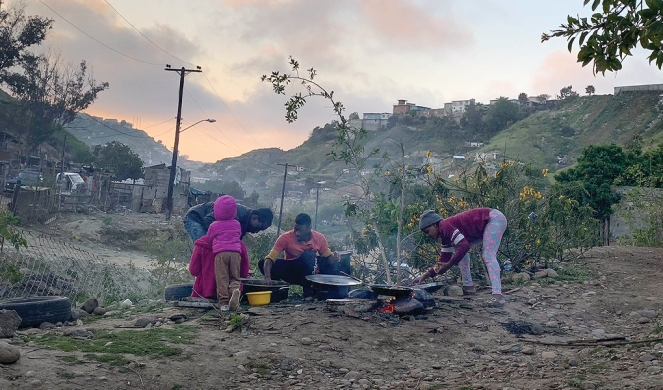 LOCAL RESIDENTS frequently compare the Haitian community to the caravans from Central America. Even Tijuana Mayor Juan Manuel Gastélum praised the Haitians, saying they came “in an orderly way” with “a clear vision” and “never asked us for food or shelter” or caused any public disturbances. He did so to draw contrast with the Central Americans, whom he described as “aggressive and cocky.” Officials have arrested dozens of caravan members for drug possession and public intoxication, further exacerbating the locals’ long-harbored discrimination against Central Americans.

It is not true that Haitians weren’t in need of food and shelter, and their situation is not quite comparable to that of Central American asylum-seekers, many of whom are fleeing not just economic insecurity but violence in their neighborhoods. And because Central American families have a better chance of avoiding deportation in the United States, they are more determined to cross the border at whatever cost, whereas the Haitians are much more likely to plant roots in Tijuana to invest, assimilate, and contribute to society.

One of the churches that has benefited from the Haitian community is the First Baptist Church in downtown Tijuana, which opened its building to shelter the Haitian community in October 2016 and now shares its sanctuary with about 200 Haitians, who hold Creole services on Thursdays and Sundays. Every Sunday, Haitians fill the pews of First Baptist Church, and their growing numbers now exceed that of the local Mexican congregation. On Tuesdays, Haitian church members go out into the streets to evangelize to local Mexicans, and about a dozen have visited the church. When migrants from Central America arrived, the Haitian church community prepared meals and brought them to the shelters. Currently, their pastor, Amos Carrier, 35, is discussing with other local Tijuana pastors ways to minister to the physical and spiritual needs of incoming migrants. 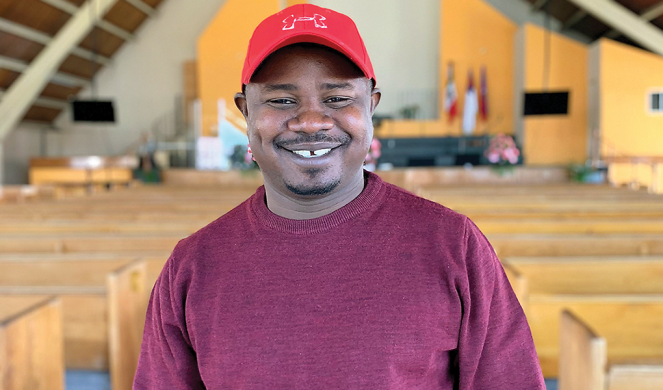 Carrier, who followed his Haitian congregation as they chased after job opportunities from Ecuador to Brazil to Mexico, said life in Tijuana is still tough for his community: Though it’s easy to find jobs, the pay is extremely low, and the majority are “barely surviving.” Sometimes, unscrupulous employers or landlords take advantage of foreigners like them, such as by cheating them of their wages or sending them an inflated utility bill. But such hardships are causing Haitians to turn to God, Carrier said, and in doing so, they’re also seeking His plans for them in Mexico: “As Christians, what matters to us is God’s will. If it’s God’s will to stay here, we will stay.”

That’s what Joseph Daniel, 33, said happened to him after he arrived in Tijuana with his wife in December 2016. His plan was to cross the border, but more than two years later, he’s still here. Daniel said he wasn’t disappointed that his plans fell through: “God’s plans are always superior than mine.”

Today Daniel ekes out a living at a welding shop and recently celebrated getting his permanent residency in Mexico and the birth of his daughter. He’s also attending a three-year seminary course with three other Haitians through a scholarship.

If Daniel finishes the course, he’ll be eligible for ordination as a pastor. For now, he’s content “living out Matthew 28:19” as a husband, a father, and a student—“but tomorrow, who knows? There’s the plan of man, and then there’s the plan of God.”