On May 2, Basuze Madogo went to break bad news to his brother Joseph. Joseph’s wife Diane, who had fled the Democratic Republic of Congo (DRC) in 2005 and is a refugee in Burundi, would not be coming to the United States after all. At least not yet.

Madogo, a caseworker for World Relief, fled with his family from the DRC during the First Congo War when he was 9.

Madogo remembers food shortages and other hardships in a Tanzanian refugee camp: “no proper medication, no schooling. Conditions are very bad.”

In 2002, Madogo moved to Mozambique with one of his brothers, where he would spend nearly 10 years. Eventually, the United Nations High Commissioner for Refugees (UNHCR) granted Madogo refugee status, which is how he got to the United States in 2014.

But at the end of February, refugee agencies learned that if President Joe Biden didn’t soon sign a presidential determination to allow more refugees into the United States, the U.S. State Department would cancel their flights.

The administration was still operating under President Donald Trump’s 2020 presidential determination, which allowed a historically low 15,000 refugees into the United States and enacted strict geographical limitations. Those limitations excluded many of the most vulnerable refugees from Africa, including religious minorities like the Madogos, who are Christians.

After another week of inaction, the State Department canceled Diane’s flight—and those of 714 other refugees. Madogo broke the news to Joseph: “He was super sad.” It was too late to give up an apartment he and aid groups secured for her, so Joseph moved in “in hopes that she would come.”

Then, on April 16, Biden signed a presidential determination that kept the refugee ceiling at 15,000—the lowest ceiling since the creation of the refugee program. Biden rescinded some geographic limitations on refugees, but the government had already canceled Diane’s flight. Nothing had prevented Biden from loosening the categories in time to keep the flight.

The broken promise shocked refugee advocates, evangelicals passionate about the issue, and even members of Biden’s own party. Matthew Soerens, U.S. director of church mobilization and advocacy for World Relief, called the move a “gut punch.” Fierce backlash caused a backtrack weeks later: On May 3, Biden raised the cap to 62,500. But the broken trust and the uncertainty prolonged resettlement agencies’ difficulty recovering from the program’s cutbacks during the Trump years and weakened the United States’ global leadership on the issue. And the delay left refugees in camps battling COVID-19 and food shortages.

“The sad truth is that we will not achieve 62,500 admissions this year,” Biden’s statement about reversal said. He blamed it on the “damage of the last four years,” a reference to the Trump administration’s policies. But he did not acknowledge his own actions exacerbating the issue.

The Biden administration’s rationale for the delay didn’t make sense and left advocates searching for answers.

“Even with people who didn’t vote for him but nonetheless are in agreement with him on refugees, it’s hard to see what they’re doing,” Dr. Russell Moore, president of the Ethics and Religious Liberty Commission of the Southern Baptist Convention, said after Biden’s initial delay.

While the most plausible answer may be a botched political calculus, the Biden administration’s real reasons still remain a mystery. 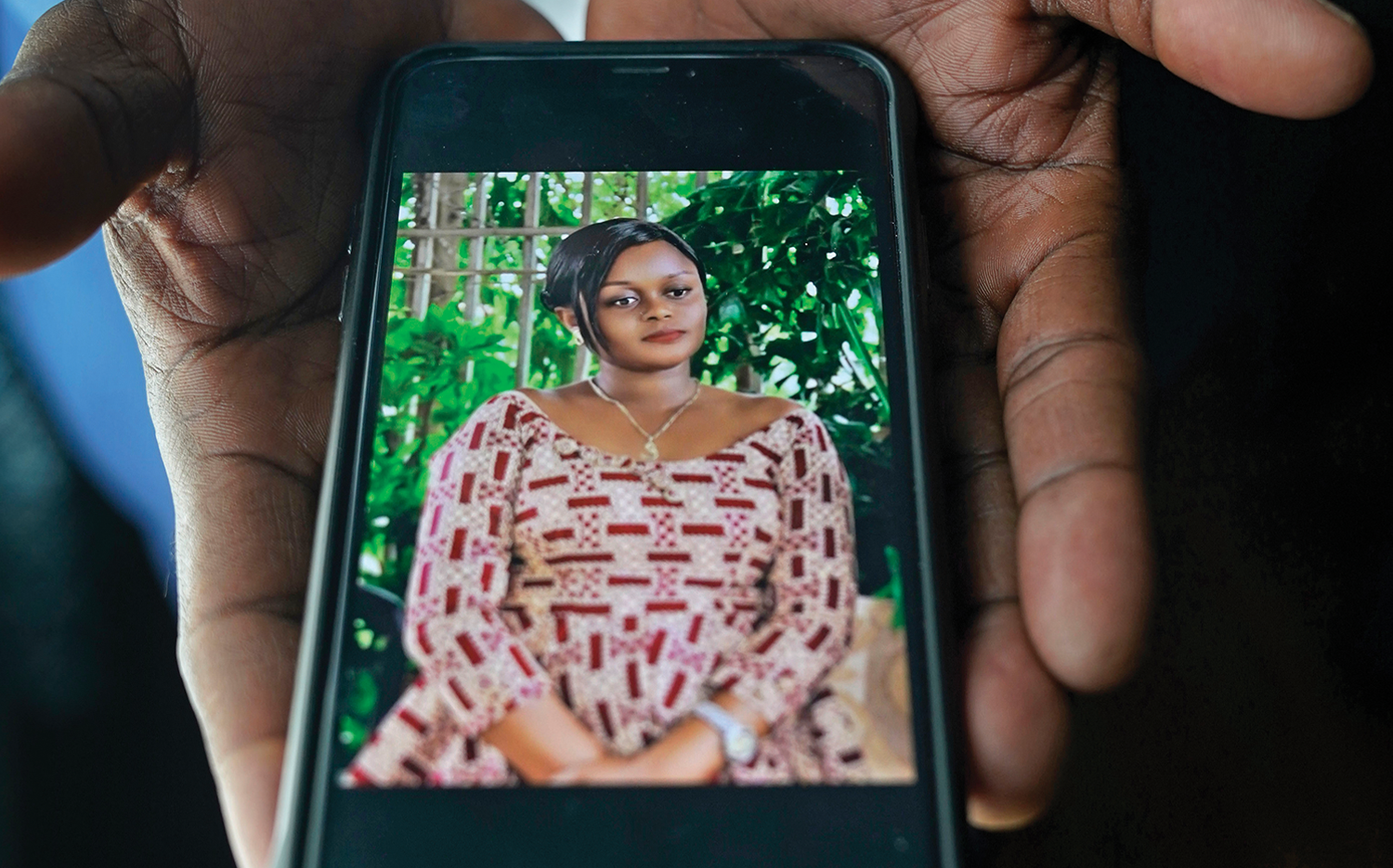 Joseph shows a photo of his wife, Diane. Larry McCormack/Genesis

AGENCIES AND NONGOVERNMENTAL organizations that work with refugees had reason to believe refugee caps would change swiftly under Biden. On the campaign trail, Biden promised to reset the cap to 125,000. In February, after taking office, Secretary of State Antony Blinken notified Congress the administration would seek to resettle half that number, 62,500, for the remainder of the current fiscal year ending Sept. 30.

Hours after the April 16 announcement, the White House backtracked. In a statement, press secretary Jen Psaki said Biden would raise the cap before May 15. But she said that due to “the decimated refugee admissions program we inherited, and burdens on the Office of Refugee Resettlement, [Biden’s] initial goal of 62,500 seems unlikely.”

But Biden’s initial delay in making any move on the refugee ceiling seemed to catch even his own State Department, which had already booked flights for refugees, by surprise.

“I cannot express to you how simple this piece of paper is,” Elizabeth Neumann, who served as a senior adviser in the Department of Homeland Security under Trump, said of the declaration. “I have written many executive orders … a lot of the things the president signs can be very complicated. This is not one of those things.”

She and others think the delay was politically motivated. They told me they heard nothing from contacts in the administration that indicated any kind of security concern delayed Biden’s move.

“It seems clear this was a political decision at the level of the president,” Soerens said. “There’s not a lot of reason to think [the Department of Health and Human Services] was raising red flags either.”

Galen Carey, vice president of government relations at the National Association of Evangelicals, was on an April 16 call with White House officials. He said the administration remained “tight-lipped” about why and how it arrived at the decision. But it seemed clear to Carey that some of Biden’s advisers “thought this would be a political liability to the president so they convinced him to go back on his promise.”

Both Politico and The Washington Post reported that administration officials feared conservative news outlets would paint Biden raising the cap as him pushing an “open border” policy.

“I think they were afraid in the public mind that the two things would be linked,” Carey said.

The broken commitment drew fire from all sides: Republicans like Sen. Rob Portman of Ohio, Democrats like Sen. Dick Durbin of Illinois, progressives like Rep. Ilhan Omar of Minnesota (herself a former refugee), and evangelical leaders like Tony Perkins, a member of the U.S. Commission on International Religious Freedom (USCIRF).

Keeping the Trump-era cap did draw approval from some quarters. Former Trump administration senior adviser Stephen Miller suggested Biden made the move because he was concerned about the 2022 midterm elections. Miller tweeted that the refugee cap should be “reduced to ZERO.”

Biden blamed the decision to keep the ceiling low on the surge at the U.S.-Mexico border and said the Office of Refugee Resettlement (ORR), within the Department of Health and Human Services, was too overwhelmed with unaccompanied minors to handle refugees.

“We couldn’t do two things at once,” Biden later said. “But now we are going to increase that number.” 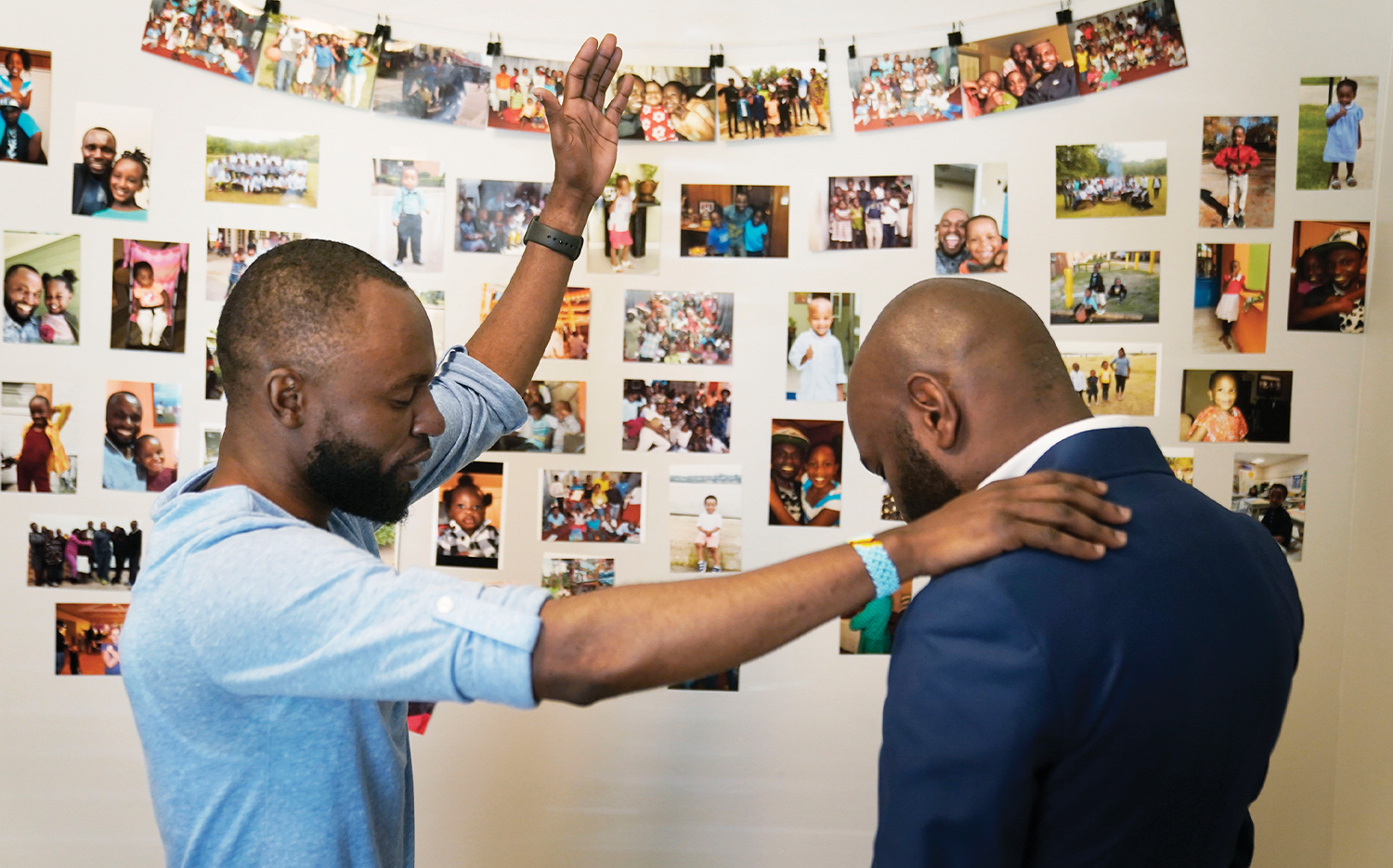 THE CONFLATION OF ASYLUM-SEEKERS at the southern border with refugees overseas surprised refugee advocates because it was the same rationale the Trump administration used to cut the ceiling from 45,000 to 15,000 in four years. But the excuse is a misrepresentation of how the processes for asylum-seekers and refugee resettlement work: They are separate programs with distinct, congressionally appropriated funding streams.

“Anyone who works with the refugee program knew immediately that was not accurate,” Soerens said of the Biden administration’s rationale. “I don’t know if the people from the White House are themselves confused or if they are intentionally playing on a topic that is sure to confuse the average American.”

Refugees differ from the asylum-seekers trying to gain entry at the U.S. southern border. Asylum-seekers at the border often seek entry into the United States due to violence or economic hardship and—until the Trump administration’s Migrant Protection Protocols policy—usually await the adjudication of their immigration cases in the United States. But refugees typically leave their countries due to religious or ethnic persecution. They can only enter the country after government vetting and approval. Refugees, Neumann and others told me, are the most vetted population admitted to the United States.

ORR is responsible for unaccompanied children and for part of the refugee resettlement program. But those programs have two distinct budgets. ORR is also the last segment of the federal government to interact with refugees.

When PRM clears refugees for resettlement, the State Department books their flights. New arrivals find and pay for housing, handle paperwork, and acclimate to the country for 30 days. The State Department also works with nine nongovernmental refugee agencies, such as World Relief, to ensure someone can meet refugees when they land.

It isn’t until 30 days after the refugees arrive that ORR steps in: For up to eight months after refugees arrive, ORR works with resettlement agencies to provide some assistance (funding for living expenses, interpretation, and employment) to refugees that helps with integration once they are already stateside. Churches and other volunteers also help in this process.

Funding levels for the refugee program within the federal government have not significantly changed since the Obama administration. But the nongovernmental refugee agencies receive grants per refugee. Soerens and others acknowledge it will take time to build the refugee program back up after the Trump administration scaled back refugee arrivals: More than one-third of the country’s nongovernmental resettlement agencies’ offices closed during the Trump administration, with hundreds of workers losing their jobs. Trump also introduced more rigorous vetting requirements and restrictions on who could qualify for relief, slowing admissions to a crawl.

But Soerens and others say raising the ceiling is the first step toward rebuilding. There are already 35,000 refugees near the end of the State and Homeland Security departments’ vetting process. Some may need to have an updated health screening: Refugees must test negative for COVID-19 before stepping foot on a plane. 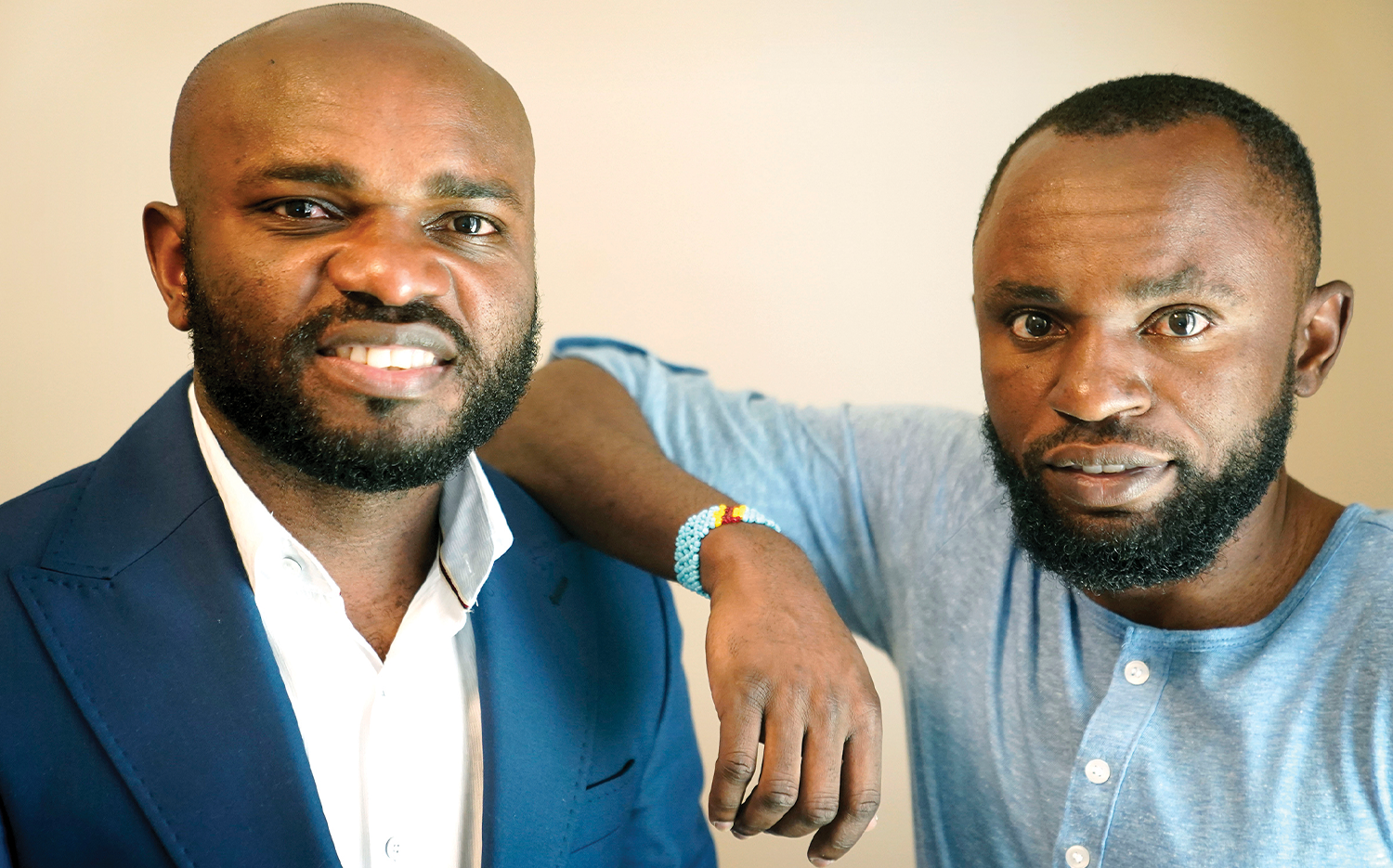 CONSERVATIVES AND CHRISTIANS have plenty of reason to be critical of the Biden administration. Many working on refugee issues had hoped they could work with the administration at least on that point. The last few weeks have eroded some of that optimism, though.

“They assumed that whatever problems they might have had with Biden, that he would correct the problems of the last administration on this one issue—refugees,” Moore said. “They’ve seen that’s not necessarily the case.”

Biden’s waffling convinced refugee advocates, such as Carey, that they need to keep pressuring the administration: “[Politicians] respond to how the wind is blowing, so we need to keep blowing the wind in the right direction.”

But even a higher limit for this fiscal year leaves questions. Carey called Biden’s disclaimer about not actually hitting the 62,500 number “disheartening.” He continued: “We would like to see them work as hard as they can to get as close to the number as we can, and they have not been willing to say how many they actually think they can resettle.”

Meanwhile, refugees who have been waiting for years to be reunited with family members said they will not stop praying.

So far, the State Department hasn’t rebooked Diane’s flight. But her family remains hopeful that will change.

“We’re obviously very encouraged … and grateful to the many who have advocated for refugees over the past few weeks,” Soerens told me after Biden announced the higher ceiling. “I’m convinced that advocacy is why the president made the decision to restore the refugee ceiling.”