WORLD’s choice for Children’s Book of the Year is The Swallows’ Flight by Hilary McKay.

Soon after Hans and his family moved into their Berlin apartment, he heard his upstairs neighbor was paying for dead flies. The flies were to feed the three orphaned swallows whose nest Erik had rescued from the ground. Baby birds are insatiable, but they also grow fast, and by the time they left the nest Hans and Erik were best friends.

They share a dry sense of humor, a talent for schemes, and Hans’ Uncle Karl, a man of connections who introduces them to the Berlin Airfield. That leads to a mutual ambition to fly their own planes. And as the years pass, Erik and Hans share something else: a distaste for Hitler and his mad schemes.

Meanwhile, across the water in England, two girls are not yet friends. Ruby lives on the coast of Cornwall and Kate in Oxford. Ruby is a strong personality made prickly by the brownish birthmarks that (she thinks) disfigure her face irredeemably. Kate, quiet and sickly, is the youngest of the Penrose clan. The one thing they share is Kate’s Aunt Clarissa, or Clarry, who served as godmother to both and tries to make them friends over a series of sporadic visits. The girls don’t click at first, but as war looms and families are reshuffled, they are thrown together at Kate’s home.

Meanwhile, on London’s East End, a scrapyard dog is friendless. He has known almost nothing but chains and broomsticks until the day strangers set him loose on the street, with rumors of war in the air. Soon the rumors will be replaced by Luftwaffe planes.

Two young men, two girls, and one dog are destined to meet dramatically in the tranquil English countryside. Their separate stories are stitched together by random events with big consequences, simple kindnesses with hidden dangers. But be warned: The details demand attention. Shy, quiet Kate, the diary-keeper, knows this instinctively. As her brother turns the pages of her most recent journal, he knows it too: “It’s a good job you wrote it all down, Kate. Or else it would all have been wasted.”

The narrative spans 15 years and a multitude of characters, and nothing is wasted. The emotional power of the story is built on countless small gestures. A clandestine wink at Christmas connects a shy girl and her irascible grandfather. A fern in a window represents a family’s commitment to do what they can. A despairing dog in the street discovers he has a heart: “A proper, thudding heart, his own, to keep him warm and alive” and to give to the first human who loves him.

McKay, a prolific British author, does have a heart for dogs: “I have a beautiful border collie named Meg.” She delved into historical fiction previously with The Skylarks’ War, a novel of WW I that features Clarry, Grandfather Penrose, and other characters from Swallows.

“I am old enough to remember my grandfather’s story re. WW1, and that was an influence [on The Skylarks’ War]. WW2 was suggested by my publishers as a natural succession, and my lovely editor’s Granny had actually rescued an airman who came down in a shot-down plane when she was only a young girl.”

McKay prefers to write during “mornings and evenings usually, in the rather chilly study I have made out of the old garage. It still looks very much like a garage and contains a lot of other people’s junk.”

“Other people’s junk” tells countless stories, but the beauty of The Swallows’ Flight lies as much in what isn’t told as what is; the gaps left for readers to fill in. Big events overshadow little lives, but the texture, color, and essential goodness of those lives reinforce what C.S. Lewis said about nations: In the end, they will matter much less than the individuals who built and lived in them. 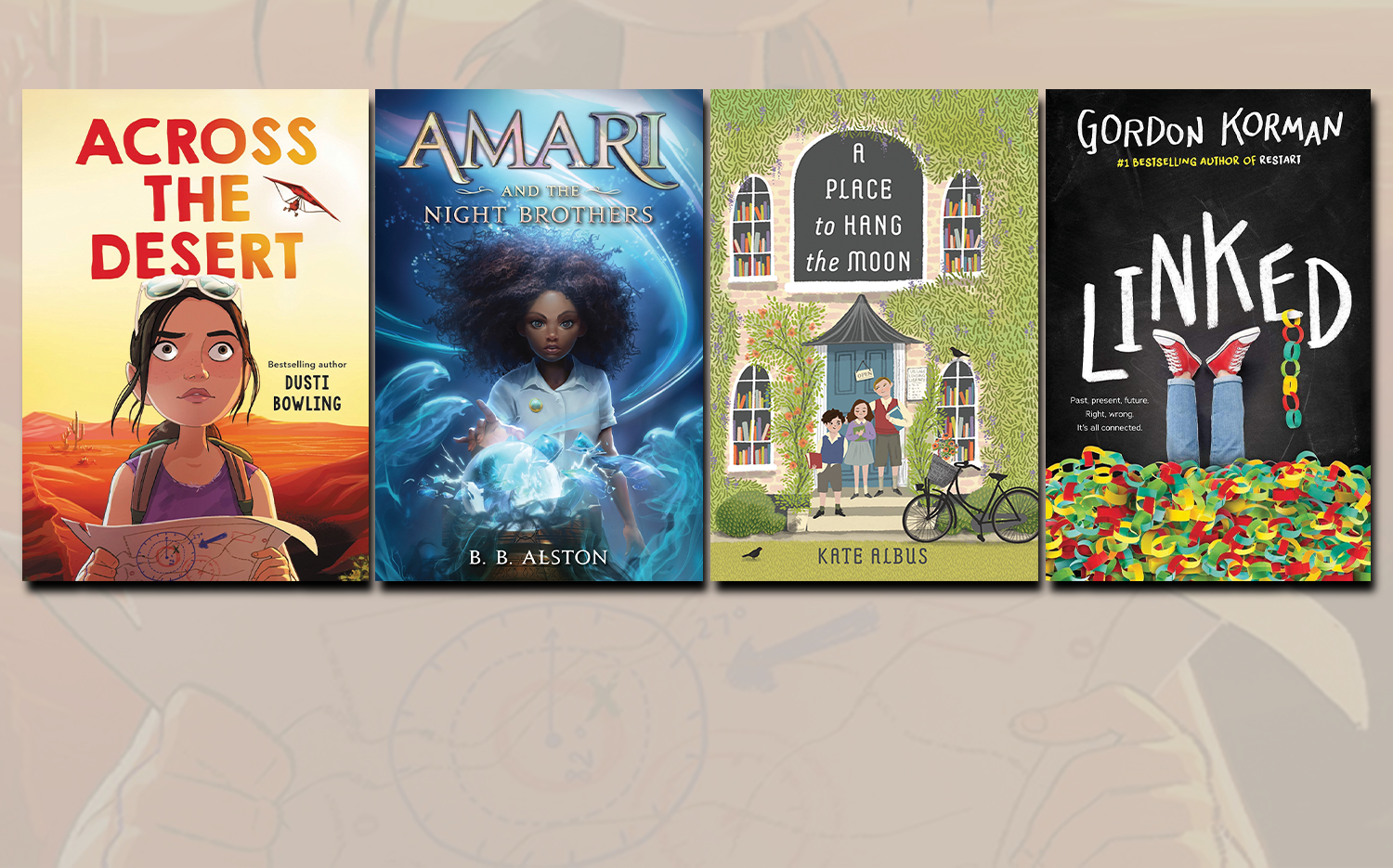 Jolene, 12, won’t miss livestreams of The Desert Aviator at the library. The aviator is “Addie Earhardt,” gliding over the landscape in an ultralight while narrating the sights. But one afternoon, Jolene watches in horror as Addie’s aircraft tips and crashes, cutting off the narration along with any clues of where she might be. With a map and a few provisions Jolene sets out to find her, a journey that becomes a gripping survival tale. The author, a Christian, also tackles the tough issue of parental drug addiction as part of Jolene’s backstory. But hope, grit, and helpful strangers save the day. (Ages 12-15)

Amari and the Night Brothers

Amari is certain her missing brother Quinton is alive, especially after a package arrives with an invitation to try out for apprenticeship at the Bureau of Supernatural Affairs. It seems her brother, a top agent of the BSA, disappeared during an undercover mission. Amari herself discovers unsuspected talents that could help her find him, as long as she can hold her own and keep her cool. Debut author Alston reinvigorates the “gifted child” fantasy trope with humor, nonstop action, and a diverse character list, including the spunky protagonist. (As this is the first of a series, though, we can’t vouch for further installments.) (Ages 10-14)

A Place to Hang the Moon

William, Edmund, and Anna Pearce, ages 12 to 9, were orphaned long ago and never bonded with their aloof grandmother. But her death leaves them in limbo with the threat of separation hanging overhead. A threat of war hangs over Britain as the siblings join the evacuees leaving London. Can a family be found who will take all of them, even temporarily? Narnia fans will be reminded of the Pevensie children, but there are no enchanted wardrobes, only sturdy English country people who lend texture and authenticity to this classic story of displaced children finding love and home. (Ages 8-14)

Chokecherry, Colo., is a quiet town where people get along—which is why the swastika painted on the school stairwell shocks everyone. School administrators organize Tolerance Week, but kids have a better idea. They’re learning about the Holocaust, so why not create a commemoration of Jewish lives lost, like a paper chain with 6 million links? Alternating voices carry the narrative, primarily that of Lincoln Rowley, the prankster who’s drawn to study Judaism: “My life should be about something, even if I haven’t figured out what that is yet.” Themes of repentance and forgiveness, though not specifically Christian, add depth to an engaging story. (Ages 10-14)

If your home were on fire, what would you save? Linda Sue Park gives treasured objects center stage in The One Thing You’d Save, a surefire discussion starter with a unique format. The Beatryce Prophecy, by Kate DiCamillo, pits a child of destiny against a treacherous king in a quasi-­medieval setting. Clues to the Universe (by Christina Li) and The Most Perfect Thing in the Universe (Tricia Springstubb) explore relationships with problem parents in contrasting but enlightening ways. Fran Wilde’s whimsical fantasy The Ship of Stolen Words ­layers smiles with a sound message about meaning what you say. —J.C.