Little Mogadishu on the Mississippi

Minnesota’s Somali Americans strive to free their community from violence

The Cedar-Riverside neighborhood in downtown Minneapolis is nicknamed “Little Mogadishu” because of its Somali American population. On Somali Street, a mall rests inside a wide, blue bungalow. There, different vendors in stalls sell traditional clothes, food items, and duvets.

A few feet away, a two-story brick building houses the Masjid Darul-Quba mosque and a cultural center. Opposite the mall, several mothers stroll with their children in a small park. Signs for Somali restaurants and other small businesses dot more streets.

Minnesota is home to 69,000 Somali Americans—about 40 percent of the Somalis living in the United States. Many of them relocated in the aftermath of Somalia’s civil war in 1991. It’s a new environment for the refugees, but many of them face the challenge of keeping their families away from violence here too.

I spent one August afternoon talking with Abdirizak Bihi, the informal “mayor” of the community, sitting outside the Cedar Riverside Opportunity Center near the park. Several people stopped to say hello.

Bihi and his parents sought political asylum in the United States in 1989, two years before the war started, because his father’s activism made him a target.

The war began when rival militias pushed out the military dictatorship led by Siad Barre. The resulting political vacuum spurred the rise of several armed groups asserting control across the country.

The bloodshed and ensuing famine sent millions of refugees out of the country, including to the United States. (Remnants from some of the armed groups formed the al-Qaeda-backed al-Shabaab, which continues to target government and security forces in Somalia.)

In Minnesota, Bihi took a job as an interpreter and cultural broker at the Hennepin County Medical Center. In 2017, he launched Somali Link Radio, a weekly English program that talks about public affairs and hosts Somali guests in public service and other fields. 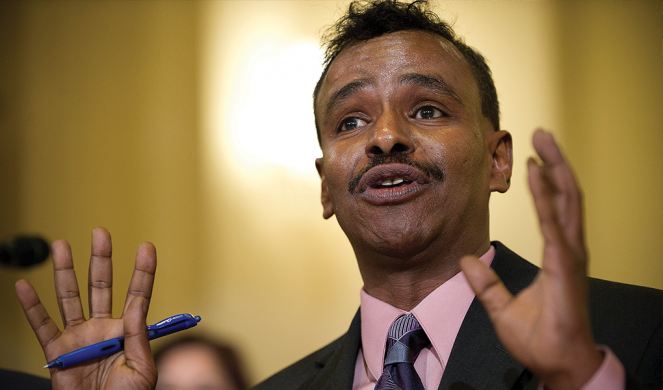 That same year, the neighborhood experienced its worst year of violent crimes, with 97 incidents that included aggravated assault and robbery. Authorities attributed the surge to rival Somali gangs in the area. Bihi says an absence of sufficient activities for the community’s young population is also part of the problem. (Half of the U.S. Somali population is 22 or younger, according to the Census Bureau.) In the last two years he and some partners have provided 400 bicycles to young people. “It’s very important that we are friendly to persuade young people away from bad things,” he says.

Down the street, the Brian Coyle Community Center also serves as a central gathering spot for the youth. Young people have access to an open gym on Friday nights, weekend nights-out, and a new teen tech center.

Ahmed Mussa, health and wellness coordinator at the center, told me some of the older women in the community run a motherhood program that keeps an eye out on the youth late in the evening until about midnight.

Some 60 miles away in St. Cloud, several Somali American families have also found a home.

I met with Jama Alimad in a coffee shop in the city. He fled Somalia after the war, where he lost his first wife, several relatives, and his thriving import-export business.

“I never thought I would be a refugee in the United States,” he told me. “I was thinking to come here as a tourist maybe to enjoy, but not as a refugee.”

He arrived in San Diego in 1997 and trained as a computer technician, and he still remembers how the climate and the ocean reminded him of home. But after nearly two years, the cost of living in California sent him searching for somewhere else to live.

He moved to St. Paul and finally settled in St. Cloud in 2004. “Most of the Somalis that are moving here, it’s just for that reason,” he explained. “They moved from another state to here just looking for a job.”

Alimad, 67, is now retired but works as a consultant with the Initiative Foundation. He serves with the program’s Enterprise Academy, which runs a five-week training session to help participants understand the ropes of running successful businesses in the United States. They learn how to handle taxes, write a business plan, and apply for loans.

The program includes participants like Fartun Jama. She is pursuing a degree in community health at St. Cloud State University but was inspired by her mother to set up her own business. She runs a clothing store that displays her self-designed clothing items. As Jama works on her business plan, she hopes her store will have branches across the United States and back in Somalia: “It’s going to happen.”

The Somali community here faced one of its own darkest times in 2016, when 22-year-old Dahir Adan staged a mass-stabbing spree at the Crossroads Center shopping mall. Ten people sustained injuries before an off-duty police officer shot Adan dead.

Alimad said he knew Adan’s family and said the community’s interfaith leadership group came to their support and stood with them.

As a community, they also embraced the responsibility of watching their children better and noting their struggles. “If something happens,” said Alimad, “the only thing we can do is look at what happened and try to prevent that from happening again.”

In 2010, vandals painted graffiti on a Somali store that read, “Go back home.” Alimad said he volunteered to clean it off. When passersby asked him what he thought about it, he replied simply that he’s already home.

Yet Alimad still holds dreams of returning to Somalia. His eldest daughter, Fadoumo, is leading the way.

She first went back to Mogadishu after high school in 2013 to visit her grandmother. She was inspired to return after she saw the rising Chinese influence across the country.

She completed her degree in economics and international trade from the Wuhan University in China and plans to return to Mogadishu before the end of the year to start a solar energy business with four other African schoolmates.

Alimad approves of the decision: “There’s a brain drain from Africa that needs to go back. I was really proud of her.” 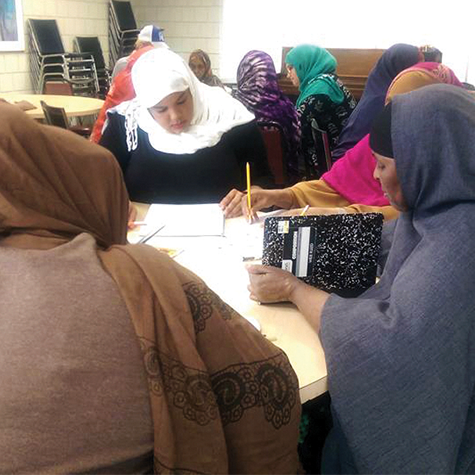 Some Christians have viewed the arrival of Somali immigrants as an opportunity to serve and spread the gospel. Christian groups like Arrive Ministries assist refugees with resettlement services for the first 90 days after their arrival. These include housing, employment, and immigration legal services.

The ministry’s Michael Neterer said other programs like Refugee Life Ministries were born out of a need to continue to serve as good neighbors beyond the post-arrival services. The program encourages churches to adopt one refugee family for a year. “We often see the relationship going on for many years,” Neterer said.

Arrive also runs Somali Adult Literacy Training (SALT), which extends to St. Cloud and Rochester. The program includes nearly 200 volunteers, but many Somalis remain on the wait list. SALT assists the refugees with English literacy lessons, whether they need help with conversational English or a full understanding of the language to study for and pass the U.S. citizenship test.

Serving their neighbors also came into play in more difficult instances. After the March mass shooting in a New Zealand mosque, where one Somali child was the youngest casualty, Neterer said he led a visit to the Darul-Quba mosque.