The Little Blue Cottage by Kelly Jordan: All year long a quaint blue cottage on the bay sits unoccupied until a little girl and her family arrive in the summertime, filling the house with the smells of pancakes, bacon, and sunscreen. Each year, the girl boats, fishes, flies kites, and shelters from summer storms inside the little cottage. From a cozy window nook, she always whispers, “I miss you when I am away.” But one summer the girl never arrives, and subsequent years of neglect render the cottage “dimming to gray.” The story shows—with sensory detail and soft illustrations—that family traditions are often rediscovered and renewed. (Ages 4-8)

The Hike by Alison Farrell: Three children hike to the top of a mountain, making discoveries along the way. Wren meticulously documents their findings in a sketchbook while El writes poetry and Hattie uses the map to direct the trio when they get lost. The pages include flora and fauna labels that showcase a vibrant ecosystem teeming with life. The girls observe, taste, tire, freeze, rest, and trek home with a gorgeous sunset backdrop—all markings of a good hike. This book immerses readers in the woods and will likely encourage some budding outdoor enthusiasts. (Ages 3-9)

The Camping Trip by Jennifer K. Mann: Ernestine experiences her first weekend camping trip with her aunt and cousin. Despite her preparedness, some parts prove stretching. A rigorous hike is much different than her walk to school. Sleeping in a tent is uncomfortable—and she misses her dad. But she also discovers banana slugs, scrumptious s’mores, and the beauty of nature. Double-page spreads of the lake, trees, mountains, and a vast, starry sky will inspire readers to start planning their next trip. Mann adds variety and texture with page layouts, line drawings, and speech bubbles. (Ages 3-7)

Sandcastle by Einat Tsarfati: A little girl sets out to make a sandcastle amid a crowded beach (and an amusing myriad of sunbathers). Her castle turns out so elaborate that it attracts kings and queens from around the world. They are initially impressed, especially because ice cream is served “any kind, any time.” Readers will be impressed, too: A cross-section view shows castle rooms with books, dinosaur bones, a sleeping dragon, and more. But troubles begin when the royal guests find sand in everything, and the castle erupts into a sandball fight. (Ages 4-7) 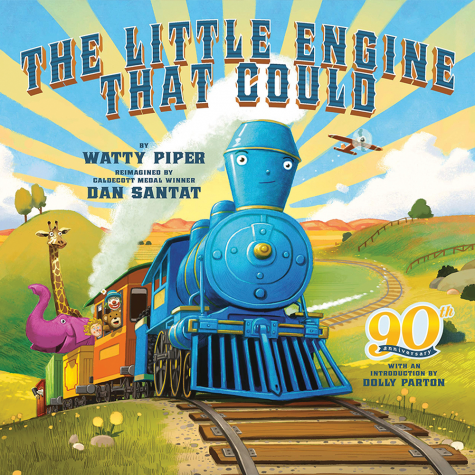 Warm and clean, the ­pictures tell the same beloved story but without some of the playful details from the 1954 edition illustrated by George and Doris Hauman, including milk jugs with legs and a motley crew of toys and animals. Santat’s toy characters are dwarfed by the trains and lack the same magic, but a determined blue engine still shines.

In Chirri & Chirra: Under the Sea (Enchanted Lion, 2020), a mysterious cave leads two girls on bicycles into a fantastical world. ­Peddling along with a “dring dring,” the bobbed, rosy-cheeked duo find coral mazes, seashell sofas, and an octopus waiter. An enjoyable installment in Kaya Doi’s series.