Tens of thousands of U.S. fertility treatments have resulted in a multitude of frozen embryos. Their mothers must decide: Use them or lose them?

On a clear California morning, golden hills stretch to the east of Interstate Highway 680 as commuters pass by on the way to San Francisco Bay. For many, the Crow Canyon exit in San Ramon is nothing more than an affluent pit stop, with a string of hotels, chain restaurants, and office buildings.

But for some women in the Bay Area and elsewhere, the exit means more. Less than a mile away, the second floor of a sleek, mirrored building houses the Reproductive Science Center, a fertility clinic that uses in vitro fertilization (IVF) to assist couples and individuals hoping to have children.

The clinic—with several locations in the Bay Area—boasts an above-average success rate: About 6 in 10 women under age 35 treated here will give birth, according to 2014 data. The nationwide success rate for this age group is about 40 percent, according to average results from 500 clinics.

At the Reproductive Science Center (RSC), as elsewhere, the IVF process involves retrieving a woman’s eggs, inseminating them with a man’s sperm in a petri dish, and then transferring the dot-sized embryos to the woman’s uterus—one to three at a time. Labs freeze the extra embryos. 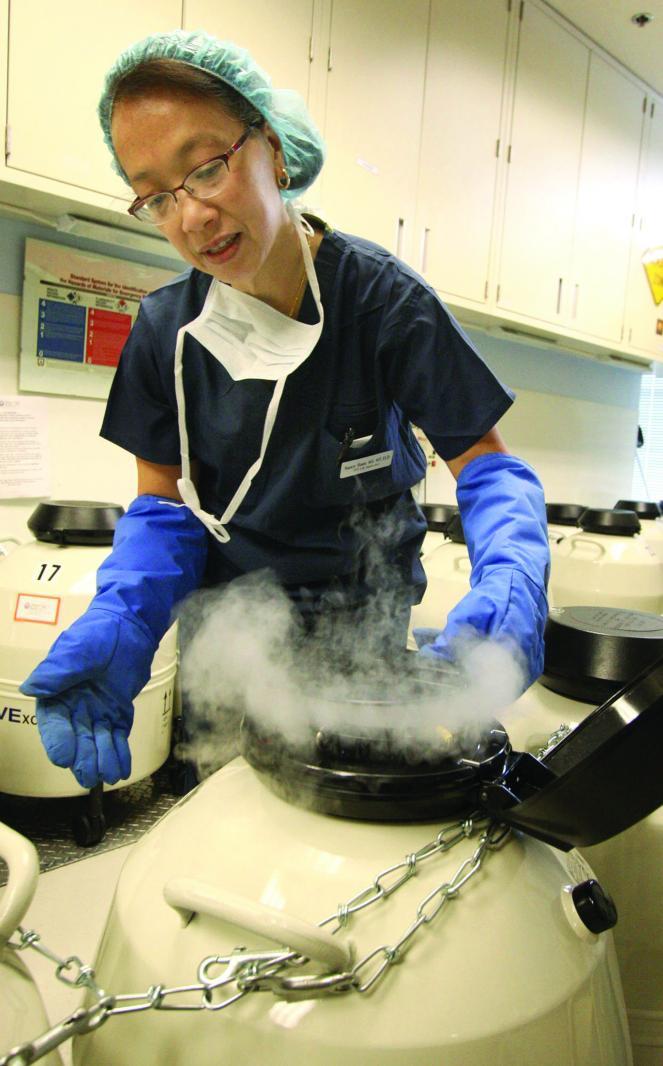 Such fertility treatments helped lead to more than 60,000 U.S. births in 2013—or 1.6 percent of all babies born in the United States that year. But after a couple using IVF welcomes children, an often-anguishing question lurks: what to do with the remaining frozen embryos? Another question: Do these cell clusters represent life?

On average, most women have about 10 extra embryos, says Mary Hinckley, an endocrinologist at RSC. IVF workers encourage producing extra embryos because it may take several attempts to get pregnant and have a baby. For parents, creating extra embryos also offers the possibility of having more children without the financial and physical strains of undergoing multiple treatment cycles.

When extra embryos remain after treatments are finished, parents can choose to discard them, donate them for medical research, or give them to an embryo adoption center.

Many couples put off this decision, leaving their embryos in storage, even as a woman’s biological clock ticks. (RSC prohibits IVF after the age of 51.) Couples pay a monthly fee: RSC offers storage for five years for $45 a month. After five years, the price rises to $75 monthly in order to encourage parents to move their embryos to long-term storage facilities.

On fertility forums, many women who have used IVF to bear children now agonize over their extra embryos, affectionately referring to them as “frosties,” “embies,” and “snowbabies.” One mother with 5-year-old IVF twins writes: “We have two frosties, frozen in the same straw, and I probably think about this every day. I can’t stand the thought of choosing only one of them ... but think it would be foolish to risk twins again.” 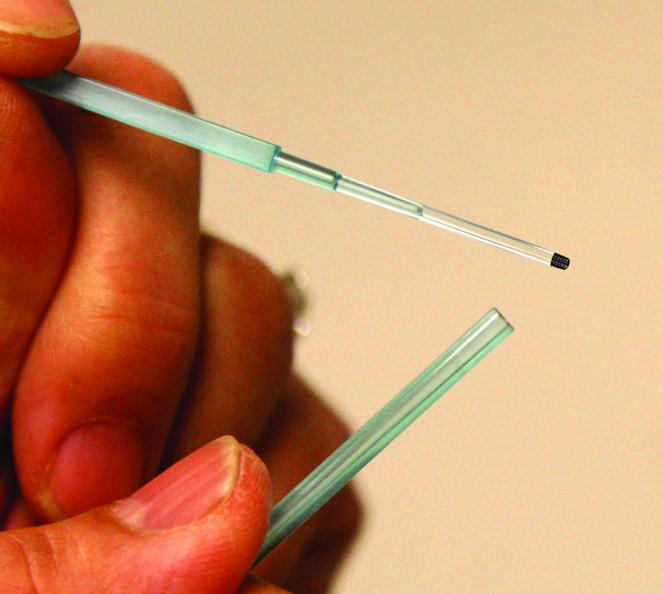 RSC has roughly 15,000 frozen embryos sitting in liquid nitrogen tanks at its San Ramon facility. Technicians fill a new tank with about 500 frozen embryos every other month. This is a small fraction of a growing multitude, now estimated in the millions, of nascent lives suspended in their earliest form.

A long hallway at RSC leads to a laboratory storage room containing 38 liquid nitrogen tanks, chained and alarmed on either side of a narrow walkway. “Contrary to what you might see, we are not a long-term storage facility,” laboratory director Kristen Ivani says.

Ivani lifts the lid of one tank marked with a white, smiley-face sticker in the shape of a sperm. Workers carefully label and store up to five embryos in a long straw and place the straws in canisters inside tanks. Each day, a technician tops off the tanks and monitors temperature sensors.

Ivani says when it’s time to discard embryos “we generally do them in big groups because it is more efficient.” Embryos thaw quickly, within a matter of minutes, and workers discard them into a biohazard wastebasket. “It is hard for me,” Ivani says. “You spend time with every single patient. You remember holding their hand during every single transfer.” In some cases, the parents are now divorced. 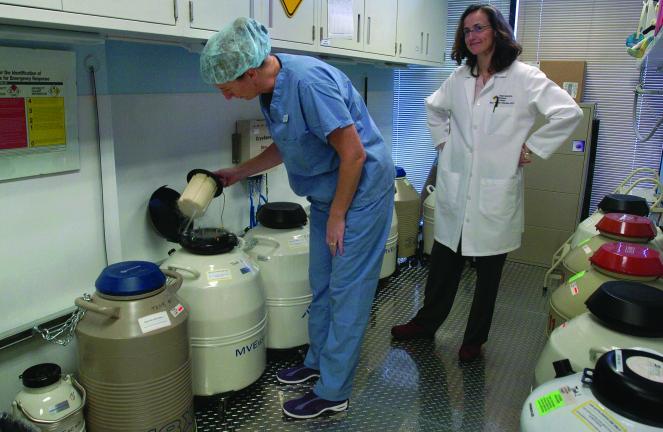 Regulations prohibit fertility clinics from discarding embryos without patient consent unless parents abandon them. Workers consider embryos abandoned when at least five years pass and parents fail to respond to the clinics’ efforts to contact them.

But some embryos have proven resilient. In 2010, a healthy boy was born after he spent 20 years as a frozen embryo. RSC’s oldest embryos date back to 1991, one year after the clinic opened. Ivani says the mother hasn’t paid the storage bills for years or responded to the center’s calls or letters. Still, RSC hasn’t discarded any abandoned embryos, including these nearly 26 years old.

Last May, she wrote about her conflicted feelings in The Guardian: “Every time I picture them I get a visceral jolt of maternal feeling. Sweethearts, you must be so cold in there without your coats. I am their mother.”

The Whippmans opted for advanced screening, a process that reveals chromosomal or genetic abnormalities. Technicians pluck a few cells off of the embryos, either fresh or thawed, and test them for potential problems. The defects aren’t always potentially fatal but may still earn an embryo a label as unviable.

Thawed embryos can be refrozen, with a 3 percent risk of irrevocable damage. Workers at RSC labeled only two of the Whippmans’ remaining embryos as “normal.” They also reported that all four were boys.

For Whippman, finding out she had boys brought more “emotional resonance,” and she planned to give at least one of the two normal embryos a chance to live. “I picture the freezer boys like our sons, waiting for us to come and rescue them with the same crumpled, anxious expressions they wear if I am ever five minutes late to pick them up from preschool.”

Maternal instincts are strong, and many couples disagree about what to do with surplus embryos. RSC’s Hinckley said marital tension is common. In Des Moines, Iowa, Amanda Fletcher and her husband had a son naturally, then twins via IVF, leaving seven remaining embryos. Two attempts to use their remaining embryos failed, and three embryos remained frozen.

In a phone interview, Fletcher said she wanted to keep trying to conceive, but added: “It became a hard subject to discuss in our marriage. He didn’t want anything to do with them ... but I was constantly yearning for them.”

The yearning for children and the moral dilemmas are a reminder that IVF decisions aren’t just medical. The Catholic Church opposes IVF: In 2008, the Vatican called the existence of frozen embryos a “grave injustice.” From a scientific standpoint, a human life begins once a sperm cell joins with an egg—regardless of whether the event occurs in a lab dish.

Paige Cunningham of The Center for Bioethics & Human Dignity says some pastors are “waking up to the reality that this is going on. … If we say life begins at conception … what we say about abortion applies both to the baby in the womb and to the embryo in the petri dish.”

The Fletchers decided to donate their embryos to another couple through Nightlight Christian Adoptions’ “Snowflakes” program. Two embryos survived thawing: One resulted in a baby boy born to the adoptive mother in June, the same month as Fletcher’s other three children.

Fletcher and the adoptive mother, who lives in California, became Facebook friends. The first time Fletcher saw a picture of the boy, she cried. He looked almost exactly like her other children. She has recently found peace: “It’s all about ‘what if?’ Would he have grown inside of me? At least I can say I gave [my embryos] a chance to live.”

Every 1 in 8 couples has trouble conceiving or sustaining a pregnancy, according to the Centers for Disease Control and Prevention. That factor, along with an increase in individuals and homosexual couples using assisted reproduction, is driving the nation’s $3.5 billion fertility industry—expected to reach $4 billion by 2018 and $21.6 billion globally by 2020, according to Allied Market Research.

The average cost of one cycle of IVF is $12,400, excluding costly medicine, according to the American Society for Reproductive Medicine. Most couples need more than one treatment (fertility experts recommend three).

Some women view their extra embryos as “insurance,” in case they want more children or one dies. Seven in 10 couples are undecided about their extra embryos, according to a 2005 University of California, San Francisco, study. A 2009 survey found that nearly two-thirds of couples kept their 5-year-frozen embryos, either out of indecision or disagreement, or in order to maintain their potential. Over 30 percent planned to keep them frozen indefinitely, with 22 percent favoring donation to science and only 6 percent planning to give them to another infertile couple.