Fleeing Ukrainians who make it to the U.S. face a life of uncertainty

When Adel Kuchik, her fiancé Michael, and her brother, Maxim, arrived at the U.S.-Mexico border on April 6, they were given a number: 2,809—the number of Ukrainian families waiting to cross into the United States from Tijuana, Mexico. They were told it would take three days. They decided to try the Mexicali crossing 2½ hours down the road and loaded their bags into an Uber. Adel, 20, and Michael, 19, carried small duffel bags. The rest of her belongings are still in Kyiv, where she was studying journalism.

Passing a long line of entry-seekers in Mexicali, they joined a separate line for Ukrainians. They waited only 30 minutes. Border agents took pictures and fingerprints and granted them one year of humanitarian parole indicated by a date stamped in their passports—April 6, 2023. That’s the day they have to leave the country.

Adel, Michael, and Maxim, 14, are among thousands of Ukrainians who have received humanitarian parole at the Mexican border. The Biden administration announced that the United States would welcome up to 100,000 Ukrainian refugees using “the full range of legal pathways.”

An asylum case backlog of 1.6 million cases with an average wait time of 4½ years and an overburdened refugee system limit those pathways. U.S. border officials processed nearly 10,000 undocumented Ukrainians between Feb. 1 and April 6, and many of those Ukrainians have been granted humanitarian parole. 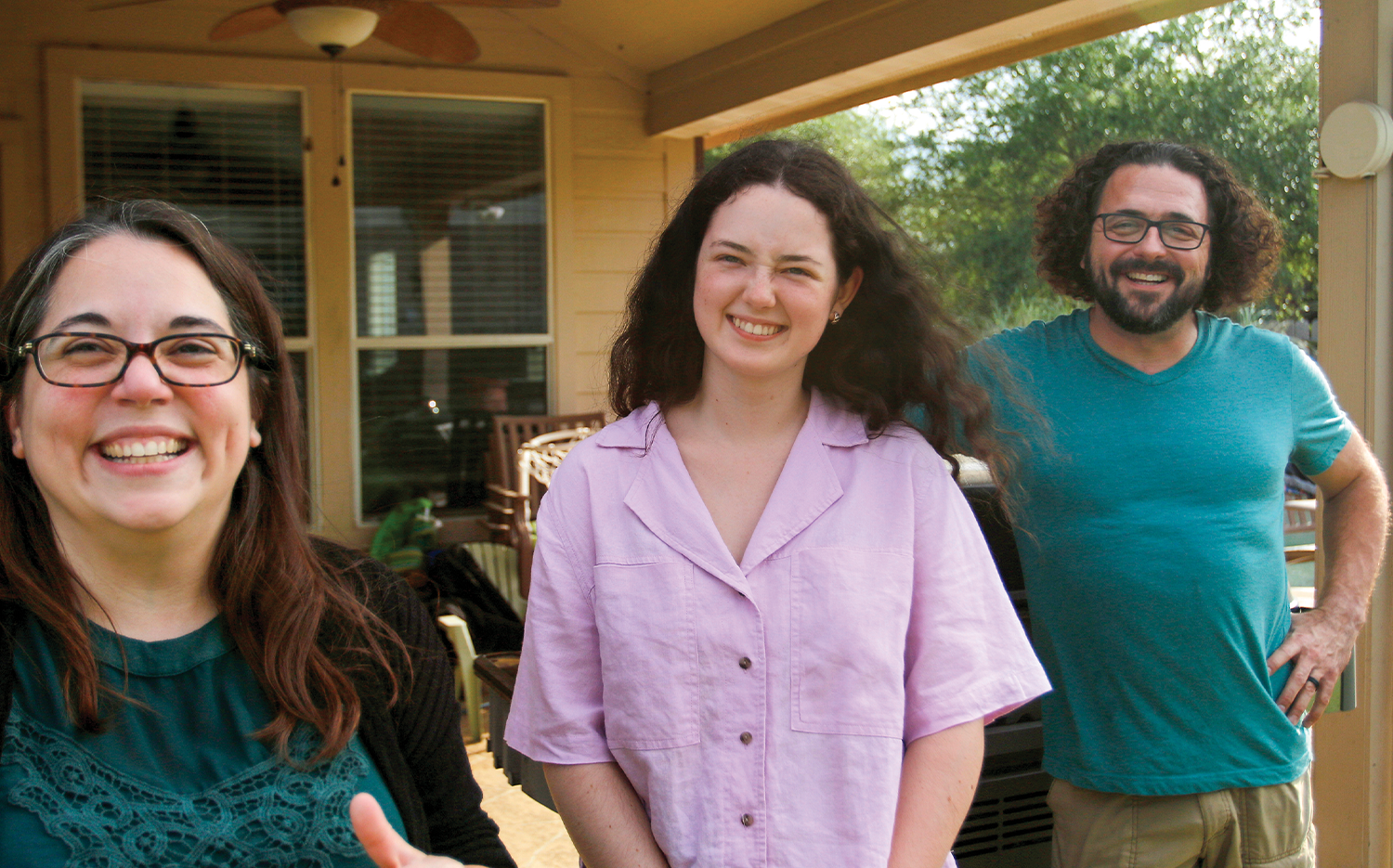 Adel Kuchik (center), with Justin and Melanie Vitovsky, at their home in Cypress, Texas. Photo by Johnny Hanson/Genesis

On April 24, the Biden administration announced a new humanitarian program—Uniting for Ukraine—that aims to stop the flow of Ukrainians like Adel through the U.S.-Mexico borders by allowing Americans to sponsor Ukrainians so that they can come to the U.S. directly and stay for two years.

When the war broke out in Ukraine, Adel and Michael were on their way from Kyiv to the city of Odesa for a weekend getaway. It was Feb. 24. Her dad called and said the Russians were attacking. Don’t go to Odesa, he warned, they are already there. Instead, they raced across the border to Moldova.

Two days later, Michael proposed. “We were afraid we would lose each other,” Adel said. As he got down on one knee, she cried. The reality of their situation hit her: “It was a strange moment.”

After a trip to the Slovakian border to pick up Maxim, Adel and Michael drove to Lithuania. Soon after, her mom, who is divorced from her father, joined them in Lithuania, where she is still staying with their cousin. Adel’s dad is in the occupied Ukrainian city of Melitópol caring for his parents. He can’t leave the country because of the draft.

After fleeing Ukraine for Lithuania, Adel, Michael, and Maxim applied for tourist visas at the American Embassy to stay with the Vitovskys, the host family Adel stayed with while studying in Texas during high school in 2017–18.

Her host mom, Melanie, sent them the money—raised through lemonade stands and craft sales—for the €480 fee. But no appointments were available. “We prayed for God to open new doors for us,” Adel said. That’s when they heard that the United States was admitting Ukrainians without visas at the Mexican border.

Back in Texas, Melanie searched frantically for flights. Because they did not have transit visas, Adel and the others could not fly through Canada, London, or the United States, and alternative routes were scarce and incredibly expensive. It was 2:30 a.m. when she found a flight on Turkish Airlines. But one of the legs was full. Frustrated and discouraged, she prayed, “Lord, if this is Your will for me, open the door.” She tried again, and this time the booking went through.

Adel wore her only pair of footwear—pink Crocs now covered in dust—from Vilnius, Lithuania, to Istanbul, Turkey, and finally to the Mexicali border crossing. Volunteers at the border provided the bedraggled travelers with food, water, and a place to sleep. U.S. Citizenship and Immigration Services officials soon granted them humanitarian parole and allowed them to enter the U.S.

A few flights later, they arrived at Hobby Airport in Houston, where the Vitovskys and their 12-year-old twin boys welcomed them with a blue-and-yellow sign that read “Welcome home, Adel.”

That first night, Melanie’s husband Justin made Adel’s favorite meal from her days as a foreign student: tacos with H-E-B taco seasoning. When I spoke with Adel, it had been five days since they made it to the Vitovksys’ small home in Cypress, a city outside Houston.

Now they can apply for Temporary Protected Status which gives them the right to work, but their future is still uncertain. Adel and Michael plan to marry as soon as possible. Her parents told her they can have a small party later and do another ceremony.

“As a girl you dream about this all your life,” she said. “I’ve just got to remind myself that [God] is walking with us through all of these things.”

Addie Michaelian is a reporter for WORLD Magazine. She is a graduate of Westmont College and World Journalism Institute.