The café at Brookwood in Georgetown Handout

Gracie Kiltz was born with Down syndrome. At age 2 she developed leukemia. At 3, a nurse’s mistake left her in a vegetative state, with a severe brain injury. The doctors said she would never smile again.

Erin Kiltz, Gracie’s mother, nearly despaired. Every night her older children prayed for Gracie to smile again. Kiltz almost wished they wouldn’t. She figured they would be disappointed when their prayers weren’t answered.

She could have drained the hospital’s money in a lawsuit, but the Kiltzes, who are Christians, decided against it. Instead, they started a hospital ministry to families with sick children—and they waited.

Six months after Gracie’s injury, she miraculously recovered. Fifteen years later she graduated from her central Texas high school, crowned homecoming queen by students who loved her joyous smile. But with Gracie’s Down syndrome, advisers told Kiltz there was nothing else for her to do except go to a day habilitation center for the mentally retarded. 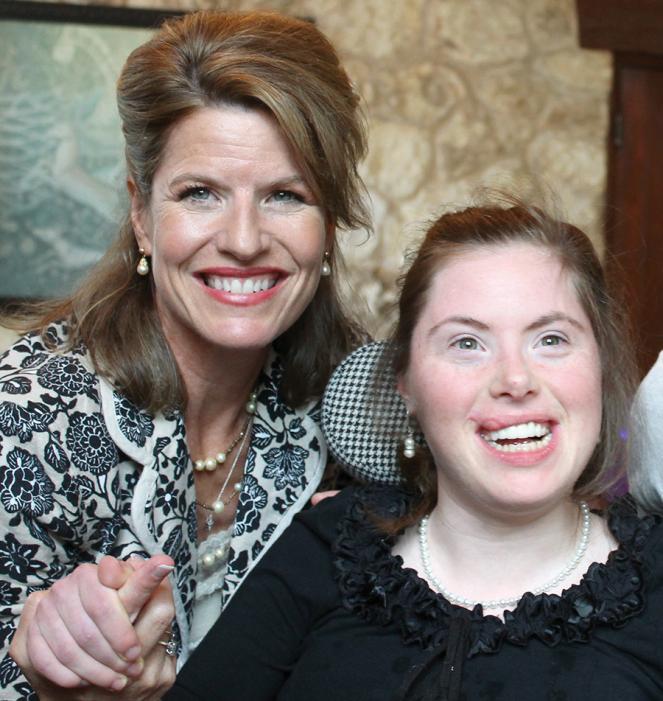 Kiltz visited day-habs and saw people like Gracie in dirty, overcrowded rooms, watching endless TV, amused by mindless tasks. “You wouldn’t want to leave your dog at some of these places,” Kiltz said. “That’s what got me launched out of a cannon.” People like her daughter, she believed, could be God’s ambassadors. Their lives should be useful, not wasted.

After a nationwide search, Kiltz stumbled across The Brookwood Community near Houston. Brookwood provides a place for disabled adults to live, work, and support themselves. Their communities include brick, single-family homes with groomed, rolling lawns, bright green under the Texas sun. Guests can shop at greenhouses with tables of flowers, smelling of lavender and herbs and staffed by volunteers and the disabled adults.

Kiltz visited 15 times, dreaming of a place close to home like that for Gracie. In November 2011 she opened a satellite campus, BiG—Brookwood in Georgetown, a vocational community that offers handicapped adults—“citizens”—an alternative to the traditional day-hab. BiG now has 60 to 65 citizens, a shop, a café, a pottery business, and more. 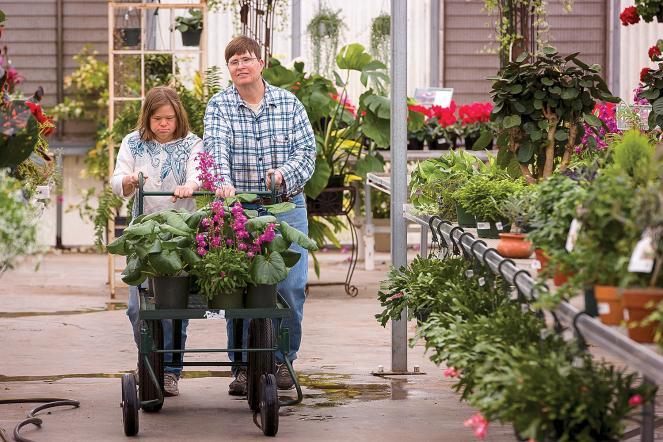 Citizens work in the greenhouse at The Brookwood Community near Houston. Michael Hart 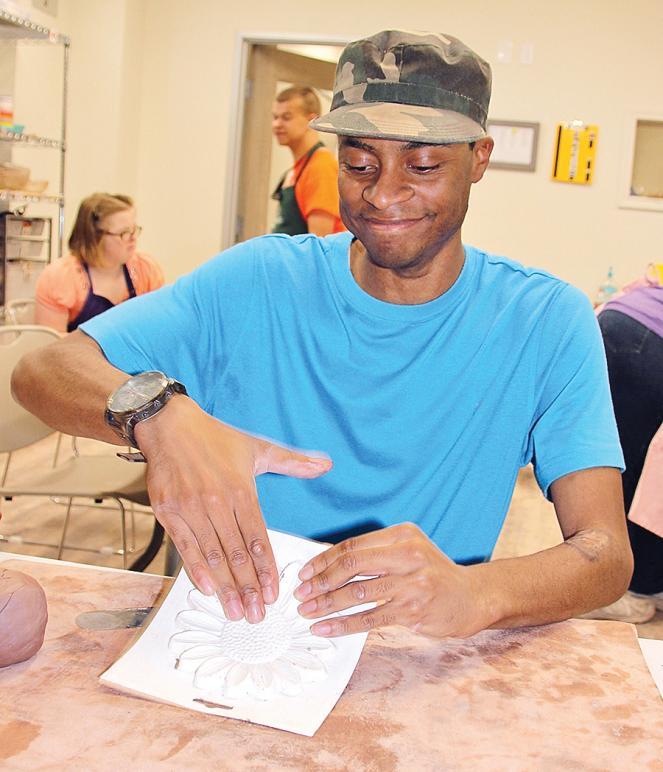 A BiG citizen at work on a pottery project Handout

The citizens work in large, well-lit rooms, with colorful pictures, huge windows, and pulsing classical music. Days begin with devotions and prayer. Workers then pick up their aprons, in colors of their choice (construction orange, purple, pink, green) and embroidered with their names.

They rotate to different activities throughout the day, supported by supervisors and volunteers. On the Tuesday I visited, citizen Corey was applying another coat of glaze to the tiny scales of a piece of fine-art pottery for BiG’s gift shop. Completed bowls, colored and delicate like flowers, are on display in the lunchroom. Two other citizens—Brian and Stephen—were cutting out ornaments in the white-walled design room.

The radio was purring a pop song: “Baby you’re a firework.” Warm sunlight flooded through trees. Brian, with a buzz cut and steel-rimmed glasses, thumped the brown clay with his rolling pin. His family had moved from Ohio to Texas so Brian could work at Brookwood. Along with other citizens, Brian had been making ornaments since June to sell during the holidays. The goal this year: 2,000. Stephen trimmed the flattened clay into a sea horse and handed it back to Brian.

“Clay,” Brian said, “I’m going to put a pattern on you, and you’ll be talented like the Lord intended.” He pressed the lace into the sea horse, peeling it off to leave a beautiful pattern.

Eric, lanky and brown-eyed, was running the embossing machine. He had been engraving the BiG emblem into thermos cups. Before he came to BiG, he introduced himself as autistic, but now he introduces himself as “artisan, athlete, actor, and awesome.”

BiG sells its goods in a high-ceilinged gift shop next to a small café. Tracy, in a crisp, white shirt and soft smile, brought out salads and sandwiches for the guests. She had tried working in a normal job but found she couldn’t meet expectations. “Here,” she told Kiltz, “I am a rock star.”

The citizens know the story of Kiltz’s daughter, Gracie, who comes to BiG almost every day. Her mother says it gives her a reason to get out of bed in the morning. One morning, during devotions, Kiltz was stumbling through an explanation of why God allows trauma. Suddenly, Tracy raised her hand. “If Gracie hadn’t had an injury,” she said, “we wouldn’t be sitting here today.”

They understand why BiG exists, Kiltz said: “After Gracie’s injury, I asked why. Now I know.”

Jae is a contributor to WORLD and WORLD’s first Pulliam fellow. She is a graduate of World Journalism Institute and Patrick Henry College. Jae resides in Corvallis, Ore.