Life and death in detention

A recent tribunal report on organ harvesting reveals the devastating torture both Falun Gong practitioners and minority Uighurs face in detention inside China.

Over the past week, I’ve watched recorded testimonies from the China Tribunal, an independent panel investigating the harvesting of organs from prisoners of conscience in China. Headed by Sir Geoffrey Nice, a prosecutor at the United Nations criminal tribunal for the former Yugoslavia, the panel listened to testimony from Falun Gong practitioners, formerly detained Uighurs, researchers of organ harvesting, and transplant doctors at a hearing in London.

In the end, the tribunal determined China has long harvested the organs of prisoners of conscience, mainly followers of the banned spiritual movement Falun Gong, and continues the practice today. That panel fears that Uighurs, who are an ethnic minority in China’s western Xinjiang region, are at great risk for organ harvesting: Chinese officials have blood-tested the population and placed more than 1 million Uighurs in massive concentration camps.

Tribunal members concluded that the Chinese government’s actions against Falun Gong adherents and Uighurs constitute crimes against humanity. They asked other international groups to determine whether China’s actions also qualify as genocide.

Overall, it’s grim viewing material: The crimes are heinous, the cover-up enormous, and the personal stories heartbreaking. At one point, an interpreter choked up as he translated a Falun Gong practitioner’s recollection of the torture she faced in prison: Guards pulled her hair, slapped her face, stomped on her, and threatened to remove her organs and burn her body. Her crime? Refusing to recant her religious beliefs. 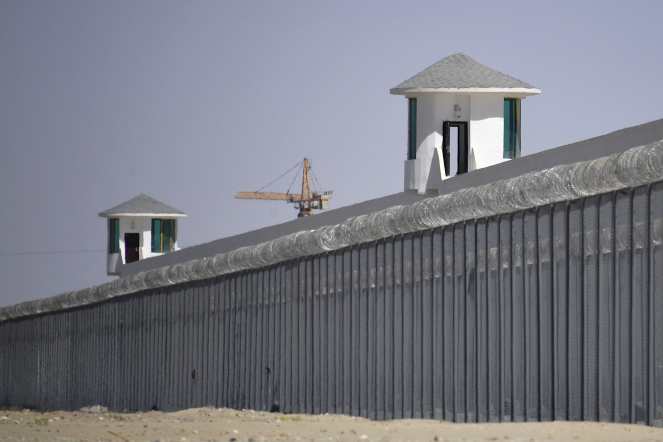 A May 31 photo shows watchtowers and a high-security fence near what is believed to be a reeducation camp for Muslim ethnic minorities on the outskirts of Hotan in Xinjiang. Greg Baker/AFP/Getty Images

Falun Gong and Uighur witnesses described other instances of torture and arbitrary detention. For instance, one Uighur woman, 30-year-old Mihrigul Tursun, was born in Xinjiang but later went overseas to the British University in Egypt to study English. There she met her husband and gave birth to triplets. In May 2015, she flew back to China with her 2-month-old babies to visit her parents.

But when she arrived in Ürümqi, she said, officials separated her from her children and interrogated her. They asked her who she knew in Egypt before hauling her off to a detention center. After three months, an official told her she had been placed on parole because her children were sick. When she arrived at the hospital, she found her son Mohaned had died. All three children had scars on their necks that doctors claimed were because they needed to be tube-fed. They never explained why her son died.

Chinese police confiscated Tursun’s passport so she couldn’t leave the country, she said. Over the next three years, officials detained her twice more, each time for around three months. During a January 2018 detention, officials placed her in a 430-square-foot room with 60 people. They had to take turns sleeping since there wasn’t enough room for everyone to lie down. During her three-month detention, nine of her cellmates died.

The detainees were forced to sing songs praising the Chinese Communist Party and memorize a book on Communist ideology, Tursun said. Each day, guards gave them only steamed buns to eat and forced them to take unknown medicine that caused them to faint and stopped their menstruation. Tursun said she was often taken into an interrogation room where guards electrocuted and tortured her. Broken, she begged them to kill her.

On April 5, 2018, petitions from the Egyptian Embassy in Beijing led to Tursun’s release and reunion with her children, who are Egyptian citizens. Chinese police told her she could bring her children back to Egypt, but that she must return to China, otherwise her parents and relatives would face punishment. She left China, but instead of returning, she traveled to the United States, where she is seeking currently asylum.

Tursun had previously told her story to the National Press Club, the Congressional-Executive Commission on China (CECC), and CNN. Chinese foreign ministry spokeswoman Hua Chunying has rejected Tursun’s account, claiming the death of her son was a lie.

Tursun said that after she went public with her story, the Chinese government forced her brother in China to call her and ask her to renounce her claims. She worries that she’s still being monitored even in the United States: Earlier this year she saw a group of Chinese men who seemed to be following her.

“As I am trying to start a new life in America, go to school, work, and take care of my son and daughter, I am still scared that the Chinese Government will try to hurt me,” Tursun said in a written account.

A trip to reeducation camp:

Chinese government officials invited the BBC to visit one of their “training centers” in Xinjiang, apparently expecting reporters to capture images of Uighurs happily dancing and reciting scripted lines. But reporter John Sudworth asked hard questions during his visit. Most telling of the Uighurs’ true feelings about their plight: graffiti in Uighur language reading, “Oh my heart, don’t break.”