Life after the Blip

Those turning to the latest Disney+ entry in the Marvel franchise as a form of escape from our fraught cultural debates may find themselves feeling a little cheated. So too will those hoping its small-screen stature might lend itself, à la WandaVision, to something gutsier and more creative than its big-screen brothers. The Falcon and the Winter Soldier is both more reflective of the troubles of our present moment and more conventional than its streaming predecessor.

As with WandaVision, the story opens a short time after the Avengers have reversed Thanos’ deadly “Blip.” The half of the universe the Infinity Rings reduced to dust has returned to life, and the spectacle of societies struggling to get back to normal after a cataclysmic event feels all too familiar. This is a world that is indeed experiencing a great reset. With the last generation’s leading defenders of life and liberty—Captain America and Iron Man—having left the stage, smaller players like Sam “Falcon” Wilson (Anthony Mackie) and Bucky “The Winter Soldier” Barnes (Sebastian Stan) find themselves uncomfortably called on to fill their shoes.

If the Mad Titan and Hydra offered more serious threats, they were also morally clearer ones. There’s little question about whether your cause is just when you’re fighting Nazi sympathizers and genocidal environmentalists. At first, our heroes’ mission seems similarly straightforward, but as the series develops, we start to suspect the characters who are supposed to represent “America” might eventually cause more problems than they solve. In a possible foreshadowing of this theme (and of the show’s intention to include current political divides), we see cops harassing the black Sam while presuming the white Bucky’s innocence. Parents who would prefer their kids not absorb pop culture that reinforces this characterization of police, as well as those who would rather avoid a smattering of foul language, might want to skip this TV-14-rated superhero story.

If the show’s villains are a bit murky, they’re also its biggest asset.

If the show’s villains are a bit murky, they’re also its biggest asset in the first three episodes. The writers have clearly considered what that anomalous five-year interim would mean for those left behind. And the show explores what those who found the world more to their liking would be willing to do to prevent it from returning to normal. 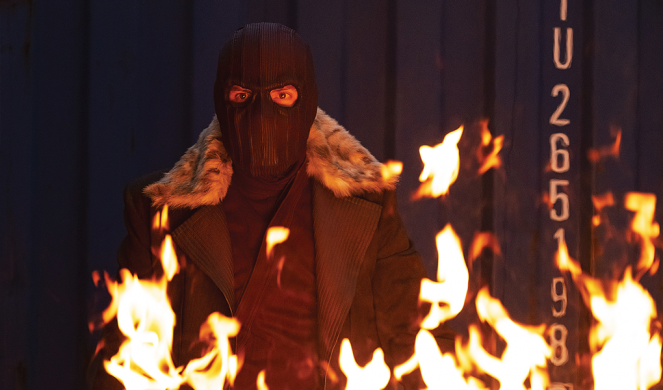 We’ve seen those who suffered in WandaVision and Spider-Man: Far From Home, but this series considers who might have benefited from the Blip. How would they feel when the cosmically displaced return and require governmental assistance to get back on their feet? What resentments might develop from suddenly having to compete for jobs, housing, or even food and medicine? The aim of the vigilantes known as the Flag-Smashers—to wrest resources from the returned—is as interesting as their name, which suggests a desire for a borderless, one-world order.

What works less well is the dynamic between Sam and Bucky. They’re meant to have the love/hate chemistry of classic buddy cops in films like Lethal Weapon or Men in Black, but somehow Mackie and Stan never quite gel at that level.

Still, though The Falcon and the Winter Soldier is a less ambitious, inventive project than other Marvel outings, it is at least a smart one. If the franchise resists the urge to regurgitate the pat answers that real-world elites are offering for contemporary problems, it could yet grow into something special.