Early in La La Land, aspiring actress Mia (Emma Stone) strolls past the famous Los Angeles “You Are the Star” mural: Charlie Chaplin, Marilyn Monroe, and other big-screen greats stare down at the sidewalk like Hollywood’s great cloud of witnesses.

The image is fitting for a ho-hum, modern-day musical about young actors and musicians who idolize fleeting promises of immortality.

La La Land’s plot is vintage Hollywood fare: Barista Mia keeps meeting and sparring with jazz pianist Sebastian (Ryan Gosling), who dreams of opening his own club. The two realize they love each other—but will their relationship survive as opportunities for fame pull them in opposite directions?

Writer-director Damien Chazelle makes the film feel like 1952’s Singin’ in the Rain with cell phones. Gosling swings around a light post, a dream sequence has the leading couple dance among the stars, and commuters leap out of their cars on a gridlocked freeway to put on a dance number. The music is bouncy and exuberant or haunting and jazzy by turns. While Gosling and Stone do not surpass Gene Kelly or Ginger Rogers, their dance sequences have an unschooled charm. 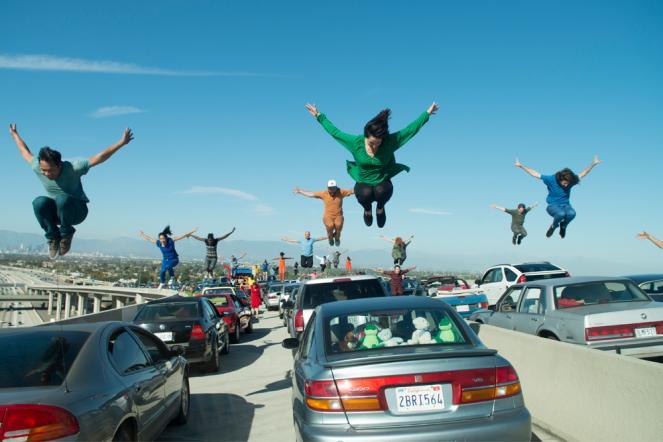 However, the film adulates Hollywood, for better and for worse. Wild parties are painted as visual feasts. Mia and Sebastian live together, though the film mimics older sensibilities and we only see them kiss. (The film is rated PG-13 for language.)

Ultimately, Mia and Sebastian strike me as selfish individuals prioritizing fame or art for art’s sake. Songs repeatedly analogize “stars” as earthly glory: Gosling croons about the “City of Stars,” and aspiring artists sing of “chasing the stars that shine.”

The last few minutes of La La Land question the sacrifices of fame, but the reflection seemingly comes too late: The film expects audiences to applaud as Mia and Sebastian pursue seductive, hollow dreams.