At the Mexico-Texas frontier, truth and lies

A Honduran mother walks with her child next to the U.S.-Mexico border fence as they turn themselves in to Border Patrol agents near Penitas, Texas. John Moore/Getty Images

Oscar Suriano on June 27 could readily recount the time since he left Honduras: 34 days traveling to the Texas border, two days waiting on the Mexico side for the right time to enter the United States, five days in a U.S. Immigration processing center, and two hours at the Catholic Charities Humanitarian Respite Center in McAllen.

Suriano in May left his home in Santa Rita, Honduras, placing his wife and daughter with family in El Salvador. He and his 13-year-old son, Kelvin, continued on through Guatemala and Mexico. They arrived at the Mexican border with Texas on June 18. Knowing that some children were being separated from their parents at detention centers in the United States, they decided to wait in Mexico and see if anything would change.

Suriano was a small-business owner in his hometown of Santa Rita. He owned and operated a pulpería, a small neighborhood food market. Gang members randomly stopped by to demand he pay “dues” to the gang if he wanted to stay alive. The first few times they came he had the money—but he knew the money would run out and he couldn’t continue meeting their demands.

Suriano knew other shop owners who had been killed on the spot in their shops when they didn’t have the money. As he described it to me, he made the typical motion of a finger across his neck, but this wasn’t simply a gesture signifying death: It was a literal depiction, since this particular gang is known for killing with a machete. Suriano was also concerned for his son: In Judaism 13-year-olds have bar mitzvahs, in Honduras gang initiations. Recruits have a choice: join or die. 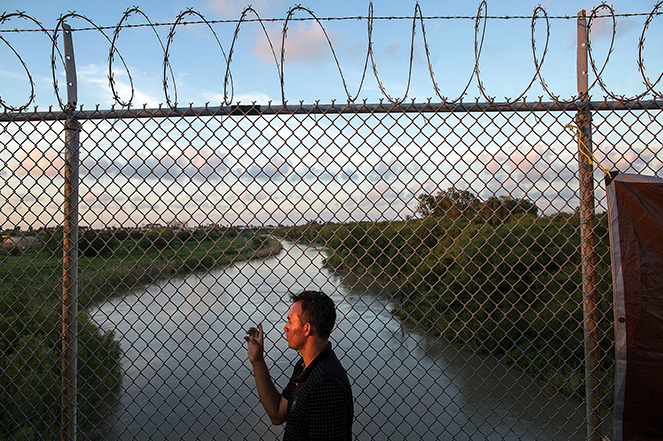 An asylum seeker from Honduras stands on the Mexican side of the Brownsville & Matamoros International Bridge.  Tamir Kalifa/The New York Times/Redux

On June 20, President Donald Trump signed an executive order to stop the separation of undocumented families at the border. On June 22 Oscar and Kelvin entered Texas through a regulated border crossing, seeking asylum. On June 27, I chatted with them in Spanish at the Catholic Charities Center 10 miles from the border. Was the dangerous trip—with separation from his wife and daughter, and possible separation from his son—worthwhile? “Absolutely,” he replied: “If we would have stayed, we would have been killed.”

Suriano spoke with ease about his experience, relieved to have made it to the United States: “The ICE officials treated us very well. They were respectful to us as they processed our paperwork and gave us food and a cot to sleep on.” Immigration officials gave him two bus tickets to New York, where Suriano’s sisters live. He hopes to arrange for his wife and daughter to join them soon.

THE ISSUES AT THE BORDER are drawing media and advocate attention, but for the Border Patrol and for local nonprofits serving those in need nothing has really changed. Every day migrants arrive at the border, some in search of asylum, many in search of jobs, many hoping to join family already in the United States.

Cesar Riojas of Catholic Charities said this is business as usual: “Nothing has changed since the zero tolerance policy went into effect. We see the same numbers of people coming in for a variety of reasons.” He said the policy did lead to more immigrants being charged criminally for entering the United States, but the practice of separating children from their parents who were being held in jail-like detention centers has been going on for years.

Riojas described a typical day at the center, past and present: Buses arrive regularly from Border Patrol/Immigration processing centers and drop off immigrants. Some already have been granted asylum, and others have court dates to continue the process of getting their visa to stay for non-asylum purposes. They shower (often the first opportunity to do so in weeks) and receive food, other necessities, and changes of clothes. To avoid lice infestation, officials at the border take all clothes except what immigrants are wearing.

Some immigrants stay overnight or for a few days. Others stay for only a few hours until they catch a bus to a more permanent destination with family or another “sponsor.” Volunteers at the center prepare them for their journey, not only with food but advice on making the right bus connections and encouragement to stay on the bus at stops to avoid confusion when navigating the bus system in a language they don’t understand. 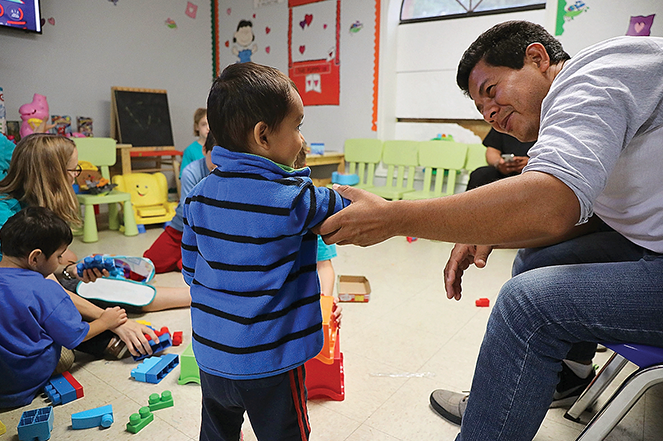 Here’s what is unusual: media interest, which has drawn to the border groups such as “Women of Faith,” who on June 27 had a prayer vigil (covered by CNN, Telemundo, and others) in front of the Ursula immigration processing center in McAllen, Texas. Rev. Jennifer Butler was there because “there’s so much moral outrage.” The women wore yellow bracelets like those given to parents with children—but at that point no one was separating children and parents any more.

Border Patrol agents declined the women’s request to go inside and pray with the women, but allowed them to stand outside. Holding signs expressing solidarity, Baptist, Episcopalian, Mormon, and other women took turns praying out loud for those inside and for the government. Their goal was to be “joined together in prayer for those families who have been cruelly separated by the Trump administration’s immoral ‘zero tolerance’ policy and for all immigrants crossing the border hoping to secure safe passage and asylum for their families.”

Some prayed briefly, others at length. One of the longer prayers went like this: “God, it is a raw feeling to know that we are a mere stone’s throw from an ancient river. … We stand now before a building with four metal walls that is keeping us from each other. … How many more walls will we build along rivers and between countries and to cage people? How many more walls, O God? … We come this afternoon with hands ready to tear them down, with hands ready to scale them if we must.”

On June 28 the women joined an ACLU-sponsored rally for immigrant children in a park across the street from a federal courthouse in Brownsville, Texas. Suzii Paynter of the Cooperative Baptist Fellowship told the crowd, “This complex issue of immigration needs our best thought and our most passionate response.”

THE PEOPLE WHO WEREN’T TALKING MUCH were Border Patrol agents stationed by the Rio Grande, which between McAllen and Reynosa, Mexico, is often only 30 yards wide. The agents were cordial to reporters and the praying women, but they scoffed at the idea of going “off the record,” since some reporters had made promises and disregarded them. Several, though, did criticize media portrayals of them—and McAllen police assured me that everything is calm and peaceful.

While not willing to be interviewed formally, the agents were clearly frustrated with current media coverage of the border issue. One said there’s no “crisis at the border”: It’s business as usual. Another referred to the attention this issue is getting as a political game, and said agents for many years, including under the Obama administration, have removed and transported kids to federally funded children’s homes. 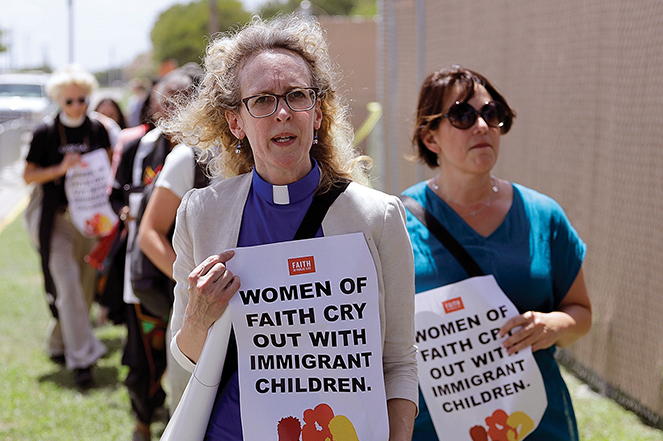 Women of Faith pray outside of a U.S. Customs and Border Patrol processing center in McAllen, Texas. Eric Gay/AP

Also near the border for the last week of June were members of the Lawyers Committee for Civil Rights. Washington D.C., criminal defense attorney Natasha Quiroga had flown in to volunteer her services at the Port Isabel Detention Center in Los Fresnos, Texas. She said most of the immigrants she counseled were from Guatemala, El Salvador, and Honduras; most were making asylum claims; and mothers were telling of having their kids taken from them in the middle of the night or without a chance to say goodbye. Many hadn’t spoken to their children since they had been separated.

Meanwhile, the current media focus on immigrants seeking asylum is moving the spotlight off the ongoing issue of illegal immigration. Hundreds of thousands continue to enter the United States by illegal means. The chance for a better economic future or a reunion with family in the United States is ample motivation to enter illegally and hope to be granted the paperwork to stay. As June ended, the United States seemed no closer to achieving an immigration consensus.

Sharla Megilligan Sharla is a graduate of the WORLD Journalism Institute's mid-career course.
COMMENT BELOW