Karjakin reaches in to take a white piece from Carlsen in Game 12 of the World Chess Championship in New York. Mark Lennihan/AP

At the Nov. 10-30 World Chess Championship, the Norwegian prodigy and reigning champion Magnus Carlsen, 25, had just lost a grueling hourslong match against his rival, Russian prodigy Sergey Karjakin, 26. It was the first time New York had hosted the championship in 20 years. The match didn’t have the geopolitical drama of Bobby Fischer versus Boris Spassky in 1972, but it turned out to be one of the most exciting, gladiatorial championships in recent memory.

Carlsen’s loss on Nov. 21 followed seven draws, so Karjakin was ahead with only four games of the best-of-12 series remaining. The Russians were thrilled at the prospect of regaining their dominance in the competitive sport, which is what the World Chess Federation known as FIDE (from its French acronym) wants chess to be–it even had anti-doping tests during the championship.

Carlsen (most often called simply “Magnus”) is the LeBron James of chess, though he does not savor the limelight. Throughout the championship Carlsen clearly preferred the lonely quiet room with his opponent and his own virtuoso brain to the clatter of camera shutters and requests for autographs in the main hall.

Carlsen became a grandmaster at 13, has the highest chess ranking of all time, and can claim name recognition among children in New York. Before the tournament Noelle Starke, 7, heard that the world championship was coming to her city and immediately knew who would be there.

Though tickets to the hourslong championship matches began at $75, some children attended each match. They would watch for a few minutes, sitting quietly behind the two-way mirror that separated the players from the spectators. Then, bored and fidgety, they wandered the sleekly renovated warehouse hosting the championship. They played blitz chess on the floor. The kids could sit still when they were playing.

Over the last decade, chess has proliferated in rich and poor American schools alike, teaching children essential skills in decision-making and concentration. Seven-year-old Noelle has chess as part of her curriculum at her charter school in New York, Success Academy. But at a professional level, chess is floundering as it tries to find its footing as a spectator sport–even with a dramatic match like that between Carlsen and Karjakin. In a city chock-full of huge brands, the two major sponsors of this championship were a Russian fertilizer company and a Russian investment firm.

Chess grandmasters at the championship argued the game at the professional level must change to bring in more spectators. With more spectators comes more money, which could spread chess as a sport in the United States.

The increased popularity of chess as a sport would be a welcome development for schools with minimal budgets, where sports like football are both expensive and raising parental concerns over safety. Chess is nearly free—and healthy for brains.

“We want to bottle that somehow—all these great programs that teach kids chess—and create a more professional following,” said Maurice Ashley, a grandmaster and the first African-American to achieve that status. He was on hand at the championship as a commentator. “There’s a lot of people who say, ‘I used to love chess.’” 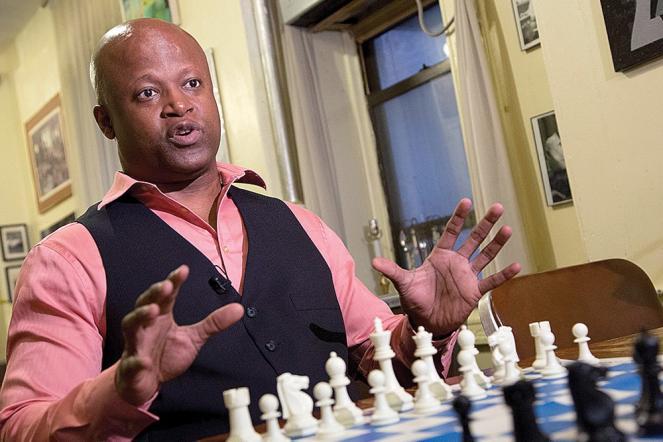 Ashley, who brings ESPN-style commentary to matches, says the upper echelons of chess are stuck in a purist model—trying to avoid spectacle. He thinks chess should somehow condense matches, which may take 4 to 6 hours, for broadcast purposes. Poker rounds can last 12 hours, he pointed out, but poker broadcasts shorten the rounds to a watchable length. He knows that popular interest in chess will translate to dollars, which will translate to more opportunities for young chess players.

“Chess now needs to change,” acknowledged Ilya Merenzon, the CEO of Agon, which owns the chess championship brand in partnership with FIDE. “It’s a little bit like going to church. Traditions are thousands of years old. Changes have to be gradual.” But the championship’s organizers sometimes hurt efforts to popularize the game: They even forbade commentators from sharing chess moves in real time to preserve FIDE’s own brand and commentary.

Just before the championship began, a New York judge heard the championship organizers’ $4.5 million suit against Chess24, a site that provides some of the most entertaining live commentary on chess games. Agon wanted to block Chess24 from a live broadcast of the championship—it considers the real-time chess moves to be its intellectual property. The judge tossed the case, but organizers are continuing to pursue such litigation elsewhere.

Liberated by the court, Chess24’s two announcers covering the match, chess grandmasters Jan Gustafsson and Peter Svidler, managed to banter for hours as Carlsen and Karjakin plotted moves. They gulped energy drinks on camera, had arguments about whether Dostoyevsky or Tolstoy was better, and told Norm Macdonald jokes.

“I’ve got a feeling he’s going to play h5,” Gustafsson said at one point.

“That only reinforces my feeling,” Gustafsson instantly returned.

A total of 10,000 people attended the 13 matches in person (a paltry number as far as professional sports events go) but FIDE this year sold $15 passes to watch the tournament online. Ashley says that digital strategy has made the games more accessible, and the Carlsen versus Karjakin match provided the kind of thrilling championship that makes new fans.

The many draws sound boring, but they weren’t. Carlsen several times watched victory slip from his fingers as Karjakin played flawless defense into a draw. Spectators could follow the match alongside computer analysis that shows the best moves—when a player made a mistake, the computer knew and the whole room gasped.

After Carlsen lost the devastating eighth game, he got a draw in the ninth game and then beat Karjakin in the 10th. They drew again in the 11th game, then Carlsen played for a quick draw in the 12th game—opting to rely on his rapid-playing skills for a tiebreaker round. Some of the Norwegian press, after watching chess all day for three weeks, acquired vodka cocktails in martini glasses. The championship has only gone to a tiebreaker round three times. Under older rules, the tie would go to the reigning champion. 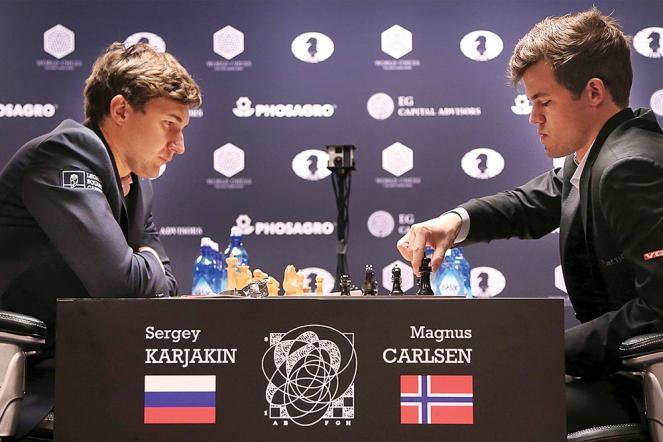 Karjakin and Carlsen in the fourth round of the World Chess Championship. Seth Wenig/AP

In the first two rapid games, Carlsen and Karjakin drew, with Karjakin playing slippery defense in one game in which Carlsen had clear odds to win. But in game three, Karjakin made a mistake and Carlsen pounced, securing a win.

For the final round, Carlsen only had to draw to win the world championship. He went for a slam dunk instead, sacrificing his queen to place Karjakin in checkmate. The chess grandmasters in the room called it beautiful, “the last best move in history.” Also beautiful? Nov. 30 was Carlsen’s 26th birthday.

When Carlsen emerged from the dim room where he and Karjakin had battled for hours over three weeks, including Thanksgiving, the crowd sang “Happy Birthday,” and he smiled. Karjakin, who drew extended applause for his exquisite defense throughout the match, was sportsmanlike.

“I don’t want to say Magnus was lucky—he was much better,” said Karjakin. “It happened as it should have happened.”

The spectators throughout the tournament were mostly white, with some Indians (the champ before Carlsen was Indian Vishy Anand), Russians, and Norwegians. Ashley, who buzzed between the VIP lounge and the press room, still is the only African-American grandmaster, but he thinks the sport will see more African-American grandmasters in the next decade. Several are already winning at the semiprofessional level.

Ashley understands that the elite chess world and the school programs are in the same ecosystem. He has coached three young teams at under-resourced schools in New York to national championships. And in the elite chess world, he started a chess tournament called the Millionaire Chess Open, which offers an almost unheard-of million-dollar pot: Winner gets $100,000. Ashley hopes the event, complete with red carpets and colorful commentary, increases professional and media interest in the game.

“It’s kind of a curiosity that I’m the one black guy who’s involved in this kind of high-stakes world,” he said. “I’m part of the chess fraternity so for me it’s a normal thing to rub shoulders with the best players, and then to switch out and go to Bed Stuy in Brooklyn and teach kids chess.”

Now he’s starting a new program with the Police Athletic League in Bed Stuy, coaching third- and fourth-graders who have never had a chess program. He has ongoing programs elsewhere in the city, including one at the Automotive High School. The kids get excited about following individual players like Magnus.

After every game of the championship, Carlsen and Karjakin took a question from a child in the audience. One asked how many games they played every day. One asked Carlsen if he was nervous before the final tiebreaker game, and Carlsen said he was: “I felt that my head was working a little bit better than it was a few days ago. … I’m very happy at the end of the match I found joy in playing. … In some ways that’s the most important thing.”

Carlsen quickly escaped the media horde after his victory to celebrate with his family at a restaurant. The Saturday after the dramatic tiebreaker, down in the West Village, the Marshall Chess Club was full but quiet as children and adults battled out matches in an amateur tournament. A photo of Magnus Carlsen hung on a wall of the brownstone, near shelves filled with tactical books. Waiting parents sprawled on staircases, eating sandwiches and checking their phones. One boy emerged from the silent room. 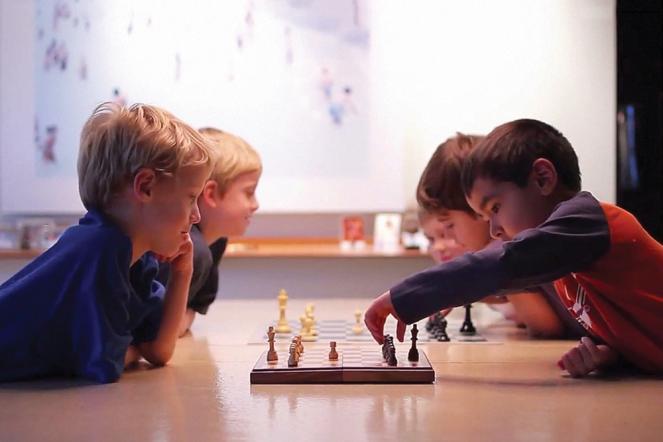 Can children as young as 3 learn chess? Tyler Schwartz, the co-founder of Chess at 3 and a Christian, thinks so. Nine years ago Schwartz was teaching chess to New York preschoolers, and they kept asking him why chess pieces moved in certain ways. Why does the king only move one space? Schwartz told the kids the king had a big belly and he had just eaten a lot of pancakes, so he couldn’t move very much. The kids laughed, and then he asked them to show him how the king moved. They moved the king one space.

Out of those interactions, he developed a story-based curriculum to teach chess. Schwartz thinks most elite chess players aren’t very good teachers because they’re such geniuses that they don’t know why they’re good. His curriculum is designed for non-chess-playing teachers. 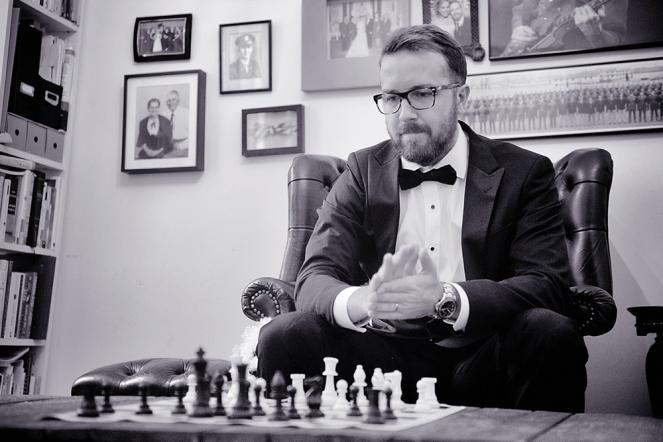 Now 14,000 students learn from Chess at 3 every week. Schwartz’s company licenses its curriculum to schools–he said it’s affordable enough ($25 for parents paying for their child) that a group of parents should be able to bring the curriculum to the school even if the school doesn’t have it. While attending the chess championship, even on Thanksgiving Day, Schwartz saw some of his older students who had stuck with chess and came to watch.

“[The kids] don’t think of chess like everyone here does,” Schwartz said, gesturing at the room full of championship spectators. “‘Oh, you need to think 10 moves ahead and you need to memorize this opening.’ They just see it as a really fun game that they can do with their friends.” —E.B.