For the first time in nine years, the Minnesota Twins are hosting playoff games. Exciting news for players and fans, but also for employees of the Twins’ home, Target Field. I went to a recent Twins game to find out what a home game is like for Target Field’s meteorologist, head groundskeeper, and organist.

It’s sunny and 75, and Mace Michaels gets to relax. He’s the meteorologist for the Minnesota Twins, responsible for advising teams and umpires about upcoming weather.

Tonight holds clear blue skies, but the radar shows a chance of rain for the following night. Michaels will keep an eye on the front for the next 24 hours.

If Michaels predicts a rain delay, he needs to tell the pitchers before they warm up. Starting pitchers are like racehorses, he says: “You don’t want to get them heated up and then sit them down.”

Ten years ago the Twins didn’t need a meteorologist; they played indoors at the Metrodome where it was “72 and cloudy all the time.” The Twins moved outdoors in 2010 to the new Target Field in downtown Minneapolis, three blocks from the headquarters of retail giant Target, which bought naming rights.

According to Forbes, the Twins are valued at $1.2 billion, which ranks them 23rd out of 30 teams for net worth. It might seem odd that this relatively small-budget team is the only major league team to have its own meteorologist on staff. But the extremes of Minnesota weather make it understandable. 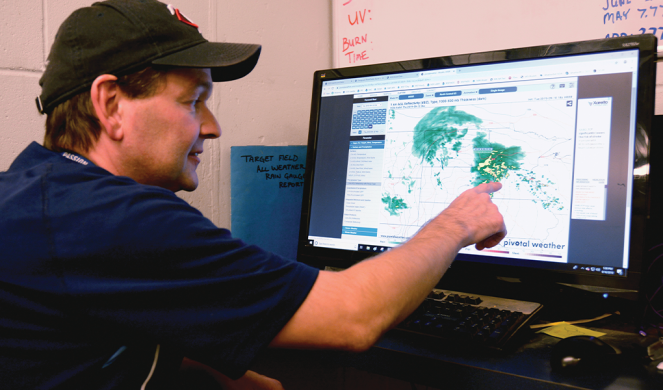 Michaels’ weather predictions help head groundskeeper Larry DiVito know how much to water the field. Both men work from a tiny concrete-walled office below the third base dugout, jokingly referred to as the “weather closet.”

DiVito oversees a team of about 15 workers to prepare the field for game day. They mow and water the grass, roll up the infield tarps, rake the dirt, prep the mound, and paint the foul lines and batter’s box. Seven work year-round, while others just come on game days.

Beneath the field is a system of drain pipes for when it rains and heating pipes for when it snows in the early part of the season. The most challenging task for the grounds crew isn’t baseball but the concerts and occasional college football games Target Field hosts. The carefully groomed grass can take a beating.

Tonight, the grass is green, the mowing lines are straight, and the weather is perfect for a night of baseball. The Twins are hosting the Nationals at Target Field. Washington’s leadoff hitter grounds out. Sue Nelson plops her hands on the organ keys and plays a ditty for the first out of the game.

Nelson has been the Twins organist since 1999. She began by filling in for the previous organist and took over when he retired. In the early days she played from the outfield press box at the old indoor stadium. When the Twins moved to Target Field in 2010, Nelson was elated she would be playing from “the best seat in the house”: She and her organ are perched in the upper deck behind home plate with a full view of the field.

Now in her mid-70s, Nelson wears a blue polo with a Twins logo and a black headset to communicate with the game producer. She plays a 1977 Yamaha model provided by a local family business, Bodine’s—the same instrument she used at the Metrodome 20 years ago. The back of the organ displays artwork from young fans and a photo of Nelson with her all-time favorite player, Twins Hall of Famer Harmon Killebrew. 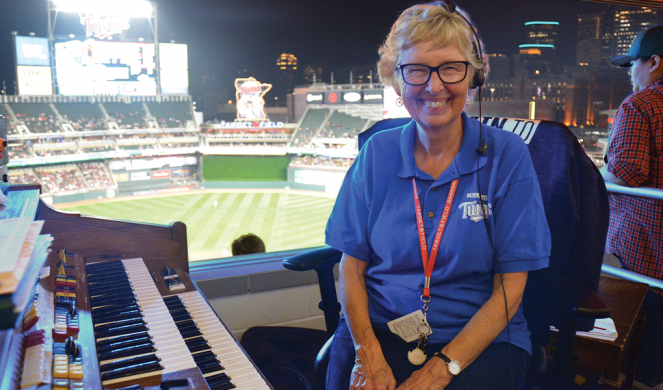 Nelson’s husband doesn’t come to many games because he plays travel softball. Her son, daughter-in-law, and grandkids come and sit with her sometimes. She sits on a small platform inside a ballpark pub, looks out over the field through open windows, and welcomes fans who come to talk with her.

She reminisces about Twins greats—past and present. Sometimes her conversations with fans are a little too distracting. In a game against the Indians, Nelson started playing while Cleveland slugger Yasiel Puig was at the plate. When she realized her mistake, she was horrified: “I almost cried.”

Nelson’s big moments come right before the fifth inning and during the seventh-inning stretch—the only times she plays through an entire song. Nelson welcomes the fifth inning with a peppy version of George Michael’s “Faith.” Shouts from fans of “Ya gotta have faith!” punctuate the fast organ chords. Nelson beams with a full smile.

During the seventh inning she plays “Take Me Out to the Ball Game.” The smell of brats, beer, and body odor swells as fans crowd around her to belt out the baseball classic. Nelson tells fans she’s more of a cheerleader than a musician: “It’s got to be the funnest job—especially when we win!”

The Twins homer at the bottom of the seventh to put two runs on the board. “Wow! Wow! Wow!” cheers Nelson as she pumps her arms in the air. Minnesota scores three more runs in the eighth inning for a 5-0 victory.

She’ll be back at the keys the next night. And the night after that. In the past 10 seasons, she’s missed just five games (for appendix surgery). She broke her arm two weeks before Target Field hosted the 2014 All-Star Game, but she played anyway. She had her doctor put on a cast that left her fingers free. Nelson played with her healthy right hand and her left hand fingers poking out from the cast.