The Dutch celebrate Liberation Day with gusto. Just past noon on May 5, an Allied military convoy roared down the banner-lined main street of Hilversum, an Amsterdam suburb. Soldiers on motorcycles high-fived the crowds along the street as women in 1940s attire dashed out to leave red-lipstick kiss marks on their cheeks. WWII-era bombers zoomed overhead as the Netherlands relived the day Nazi subjugation ended 74 years ago. Dressed in green fatigues and sitting in a U.S. Army jeep, Barry Pulles told me the goal is to keep alive the memory of those who sacrificed to liberate his country.

Pulles, 35, his father, and his grandfather Pete, who began the commemorative organization, have spent their lives remembering the past in order to safeguard the future. Looking over the gathered crowd of families and children, Pulles said, “Parades like this promote conversations with the next generation.”

Such conversations are vital in the debate over the continent’s future. European Union Parliament elections at the end of May had higher voter turnout than past years, but results show a continent increasingly fractured. For the first time since elections began in 1979, traditional centrist parties that formed the European Union don’t have a majority.

While not the landslide many hoped for, populist parties made big gains. Some Europeans worry about a return to pre-WWII fragmentation. Others say only nationalist groups take their concerns about unchecked immigration and government overreach seriously. Many ask whether Europeans who disagree on values can build a peaceful future.

For Christians, the new political tide raises questions about bearing a Christian witness in a secularized environment that does not understand their values. How can they practice compassion toward refugees in an anti-immigration climate? Can they remind Europe of its heritage and soul? 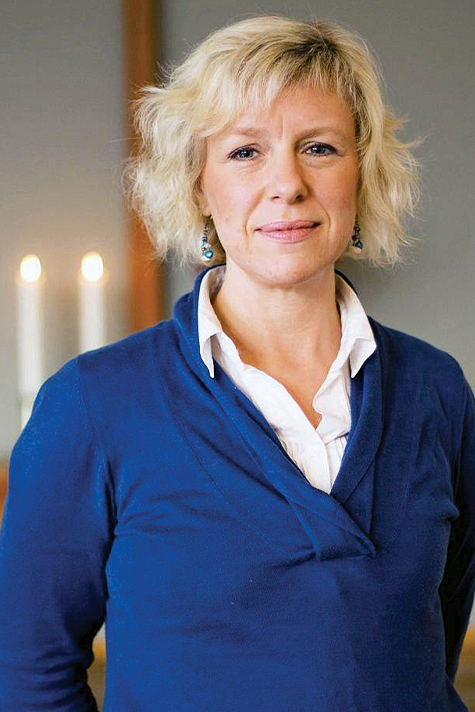 EVERY TUESDAY since early May, Kim Brynte’s church in Malmö, Sweden, rings its bells at noon. It’s a prayer call on behalf of Christian converts who are being deported to their countries of origin, Afghanistan and Iran. Churches across Sweden are joining the bell tolling to bring awareness to problems with the Migration Board’s handling of converts’ asylum cases. “The authorities are spiritually illiterate,” said 51-year-old Brynte. “The wrong people are asking the wrong questions. They don’t take pastors’ testimony into account.”

Malmö is Sweden’s third-largest city and has the highest percentage of Sweden’s immigrant population. At Immanuel Church where Brynte is pastor, members fed and taught newly arrived migrants. Many of the migrants were fed up with Islam, saw Christian faith in action, studied the Bible, and believed. They now make up 15 percent of the congregation. Similar stories have repeated across Sweden. Since 2015, Swedes welcomed 41,000 refugees from Afghanistan. Of those, more than 1,000 have converted to Christianity.

Walking alongside these converts—including two boys she took into her own home—Brynte saw firsthand the nature of the Migration Board’s questions: What is celebrated on All Saints’ Day? Explain the difference between Pentecostal and Lutheran churches? What is the theological significance of a specific verse? These are questions Brynte says most Swedish-born citizens could not answer.

Brynte’s experience echoes those of Christians in Germany and the Netherlands also working with refugee converts: the irony of non-Christian authorities determining whether a convert is a “true” Christian. “I have to teach the court about Christian faith,” said Brynte. One positive consequence: a broader discussion in these nominally Christian nations of what it means to be a “true Christian.”

Brynte says it’s a human rights issue: By deporting new Christians back to countries where conversion is punishable by death, Sweden is not obeying its own laws on religious freedom. Brynte and others formed Rättilltro—meaning Right to Faith—a grassroots group calling on authorities to address the problem.

A study commissioned by Pentecostal churches found that an asylum case’s approval or denial varied wildly depending on the political party in power where the asylum-seeker lived. The board is supposedly nonpartisan, but in jurisdictions where anti-immigrant parties—which just gained seats in the EU Parliament—control the board, 93 percent of the converts were not found to have “true faith,” compared with 10 percent where the board is made up of liberal party members. Across Sweden 70 percent of converts’ asylum cases are rejected. Meanwhile Rättilltro is raising funds to appeal to the United Nations and the European Court of Human Rights (ECHR). 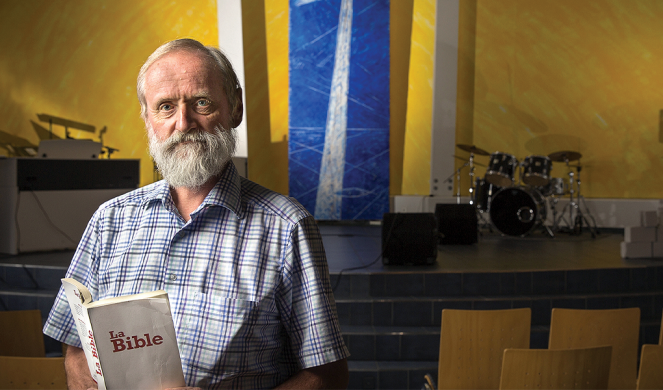 SWITZERLAND, although not part of the EU, adheres to the European Convention on Human Rights, and Swiss Pastor Norbert Valley is also ready to take his case to the ECHR. He wants to change a Swiss law criminalizing humanitarian aid. Valley pastors two churches in the French-speaking region of Switzerland. On Sunday mornings the 63-year-old father of four and grandfather of 14 preaches in his own town of Le Morat and then drives 30 minutes to the Evangelical Church of Le Locle.

During Valley’s sermon in Le Locle on Feb. 11, 2018, two policemen interrupted the service and took him away for questioning. His crime? Two months earlier, Valley offered a church key to a young Togolese refugee, “Joseph,” as Valley calls him, who needed somewhere to sleep. Joseph attended the church for five years while awaiting a political asylum decision. When authorities denied his case and made him leave his lodging, he used the church key. Joseph was eventually questioned and mentioned Valley’s name, and the police showed up.

For Valley, the police’s methods were problematic and smacked of intimidation not usually associated with Switzerland. Valley would have gone willingly if police had contacted him beforehand. When asked why they didn’t, he shrugs: “They said they didn’t have my phone number, although it’s in the directory.” Valley received a fine of $1,000 plus legal fees of $250 for aiding someone in the country illegally. He refused to pay, saying as a Christian and a pastor, he is called to help all people. Valley presented his case in local court in April and awaits a decision.

The law Valley allegedly broke exists ostensibly to protect refugees from rent gouging and human trafficking—but 90 percent of its application is in cases of humanitarian aid. Last year there were 785 such cases. “One guy got a fine of 300 francs [about $303] because someone slept at his house for just two nights! My case is only newsworthy because I refused to pay. It’s a bad law, and I want to change it.”

Valley says his concern as a pastor is for people already in the country and in his community. When our conversation turns from legalese to Biblical teaching, his pastoral zeal becomes clear. Valley cites the Hebrew midwives and Peter in Acts 5, “‘We must obey God rather than men. …’ The church should be the last refuge for people in trouble. It’s wrong that a hospital can treat a sick refugee with impunity, but as a pastor I am punished for caring for them spiritually.” He cites Carl Lutz, a Swiss diplomat who saved 62,000 Hungarian Jews during WWII, crediting him with saying, “The law of life is higher than the text of the law.”

Amnesty International and others are supporting Valley. If the local court doesn’t absolve him, he’ll appeal to cantonal and federal courts. After that, the ECHR is the last resort. Across Europe, as countries wrestle with immigration, other Christians also wrestle with what to do with laws that penalize providing medical care and food. The French government changed such a law last year so as to decriminalize this kind of immediate aid. 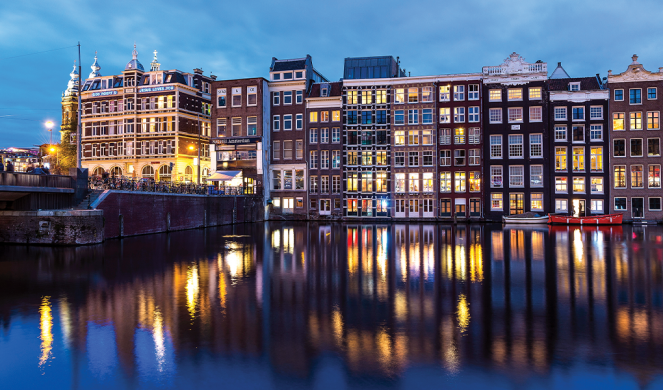 The building where the Schuman Centre is located in Amsterdam. The blue letters on the exterior read “God Calls You” in Dutch and “Jesus Loves You” in English. Novarc Images/Alamy

BACK IN AMSTERDAM, Jeff Fountain runs the Schuman Centre for European Studies from a central Amsterdam building that looks one way to the central train station and the other toward the city’s infamous red-light district. Fountain says most Europeans don’t know their own history: He notes that Christianity “laid the foundations of the European concept of humanity, with dignity, rights, compassion, and sanctity of life.”

Fountain’s center is named for Robert Schuman, a devout Catholic who, after surviving the horrors of the war, first proposed the idea of a united Europe on May 9, 1950. According to Fountain, Schuman’s vision was also spiritual: The EU was designed to be “a ‘community of peoples’ in freedom, equality, solidarity and peace and which is deeply rooted in Christian basic values.” Fountain says as Europe has secularized, Schuman’s vision has been lost.

At a Europe Day celebration, Fountain asked a gathering of German politicians: “Perhaps it is time to research our European DNA again, and ask, ‘Is there a broader, more inclusive identity that we share?’” Inclusion, not necessarily to government systems, but to common values of religious liberty, freedom of speech, and the dignity of human life, is the way forward for Europe to integrate its immigrants and strengthen bonds that transcend racial and national divides. A different path is not so far distant in the past.

Last month throughout the Netherlands, Dutch Remembrance Day—the day before Liberation Day—was incredibly solemn. Amsterdam Mayor Femke Halsema, wearing a tall black hat and her silver mayoral necklace, led silent marchers past Holocaust sites—through a once-vibrant Jewish neighborhood, over brass cobblestones engraved with the names of residents of nearby houses who were deported and murdered in Sobibor death camp. At 8 p.m. trams and trains stopped and people stood quietly for two minutes as the nation remembered the war that ended 74 years before.

By contrast, Liberation Day in Hilversum felt outrageously festive. Retasting the horrors of occupation and war meant sweetly tasting the renewed relief of freedom, along with the sugar-covered Dutch pancakes. Eating treats and watching the parade, a young boy pointed at the soldiers and told his little brother, “All this happened when Opa was 3 years old.”

In Haarlem, a small town outside Amsterdam, a tour guide at the Ten Boom Museum told how the Ten Boom family saved their consciences by saving Jews during the war. Today pastors like Valley and Brynte seek the right way to act on conscience while preaching the gospel to whomever God brings through their church doors.

In the rising tide of populist Europe, the freedom to do so feels more and more threatened.