Art: How an artist serves God by surrendering control of his work

Bruce Herman remembers doing homework in his bedroom on the second floor of a suburban home in Williamsville, N.Y., in the mid-1960s. It was for Mr. Kirschmeyer’s seventh grade art class, and he had to get special permission from his mother to tack the 4-foot-high drawing to his wall. He was so absorbed in turning the picture of a statue of Isaiah into a charcoal drawing that he had no idea how long he’d been there. But when it was done, he carried the drawing downstairs to his father.

“Bruce, this is amazing,” his father told him in genuine awe. “You should be so proud of yourself.”

Herman went on to earn a BFA and MFA from Boston University and currently holds the Lothlórien Distinguished Chair in the art department at Gordon College. An internationally recognized artist with decades of experience, he feels the same way as when he was 14. He doesn’t create art. He moves the paint, but the result is up to God.

“I’m aware that something or Someone bigger than I am is directing me,” he said. “I’m just showing up.”

Herman doesn’t remember starting to draw or deciding to become an artist. He always knew that he was an artist because God had given him a gift he hadn’t earned.

“I can’t account for this thing,” he thought about his charcoal drawing. “I can’t say it’s my deed that I’m proud of.” 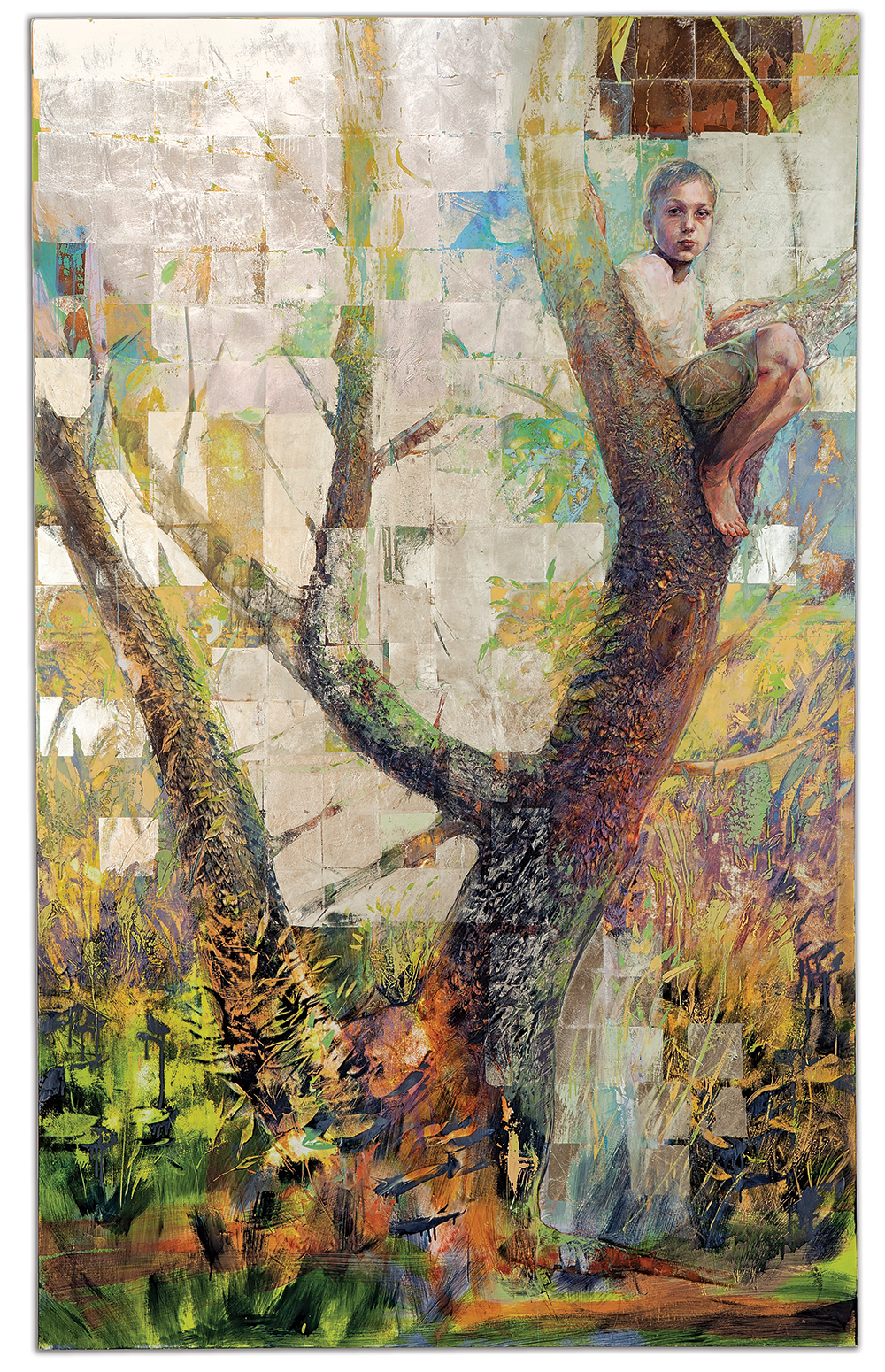 But Herman didn’t stay that humble. After his family moved to Atlanta in 1967, he spent a year and a half taking psychedelic drugs every weekend and 12 years experimenting with Eastern mysticism. He got married in 1973 and completed his MFA in 1979. Over time, his focus shifted to getting his name out into the art community as he went to parties and tried to meet the right people.

The day after Christmas in 1982, he realized that Eastern religion wasn’t bringing him any closer to God. He renounced it and became a “student of Jesus.”

“My art is so hopelessly mired in egotism that I’ll never be able to do it for God,” he thought.

He decided to give it up and started taking classes at Gordon-Conwell Theological Seminary in Hamilton, Mass.

“Would all those who are entering full-time ministry stand up?” his professor asked at a couples’ night hosted by the seminary.

Herman stood up. He felt a tug on his shirt and looked down to see his wife, Meg.

“Sit down,” she whispered. “They’re talking about people who are becoming pastors.”

The couple in front of them looked back, smiling.

“Oh, you think …” Realization hit her. “You’re an artist. I put you through art school. You’re supposed to make art.” 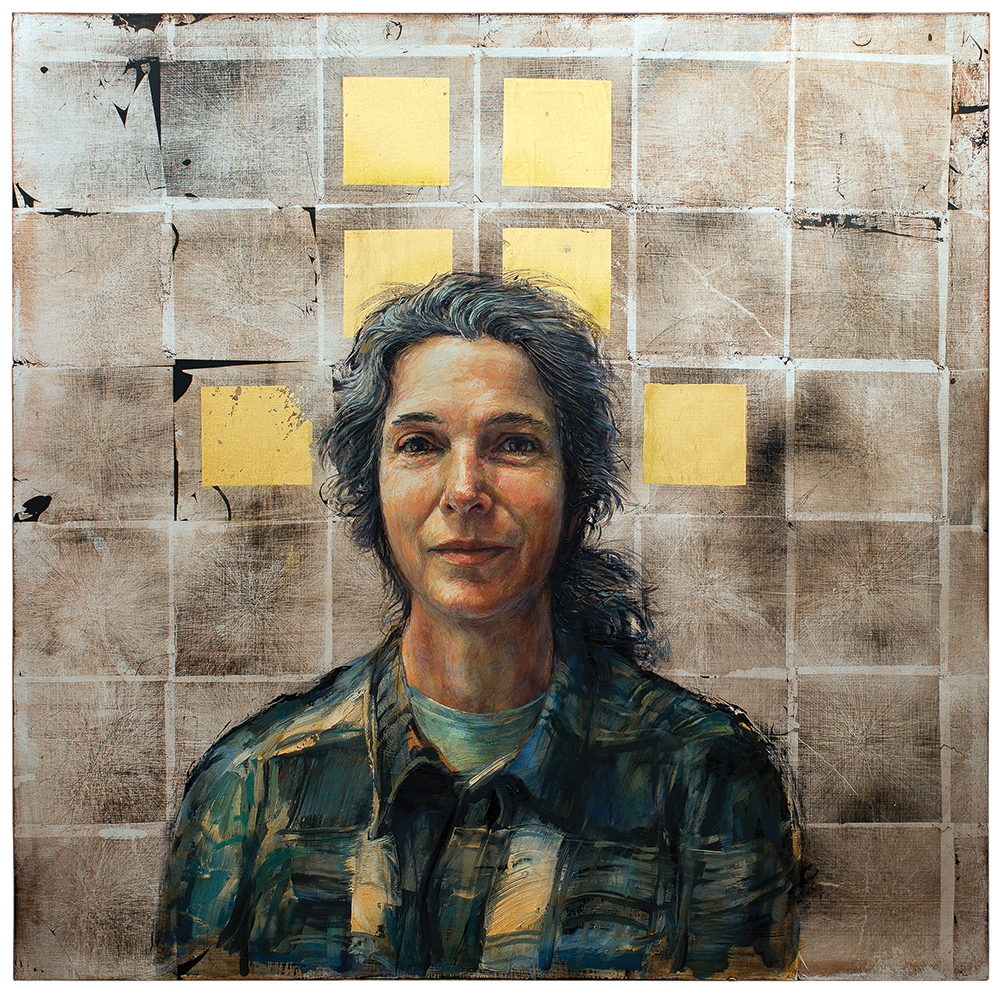 Relief washed over him as he realized the Lord was telling him to continue making art—but for His glory now.

He joined the faculty at Gordon College in 1984 and founded the art department. His art has been exhibited all over the world and is on display in museums such as the Vatican Museums in Rome and the Armand Hammer Collection in Los Angeles.

In his latest series, Ordinary Saints, eerily alive faces gaze out from in front of abstract backgrounds. The golds, greens, and reds invite closer inspection, but getting too close to the figures that the colors surround feels like an invasion of personal space.

Herman loves that feeling of life in a painting, but he can’t make it himself. “The best part of my art is outside of my control,” he said.

When he displayed a series of expressionistic paintings on Good Friday in the early 1990s, he saw a friend, Thomas Howard, standing alone in front of a large painting titled The Crowning, which depicts Jesus being crowned with thorns.

“Oh, Bruce,” Howard turned to him with eyes red from crying, “what were you feeling when you made this painting?”

“Do you really want to know?” Herman asked. “I was feeling … ‘It needs a little bit of green right about there.’”

When Herman paints, his focus is on the work itself. Putting the colors, textures, and shapes in the right places. He says he doesn’t know how to evoke emotion or instill meaning, so he just does what he knows: He paints.

“Because of the grace of God, my work’s been used to touch other people,” he said. “But I have no control over that. I’m just a servant doing what I’m told.”

—Abi Churchill is a graduate of the World Journalism Institute