Inspired by a true story

Sculptor Michael Sherrill’s studio in western North Carolina is tucked under trees, nestled a few yards from a small waterfall. The soft, cascading sound of the waterfall met the snap of a wood-burning fireplace as Sherrill poured green tea into stoneware mugs and described how nature and faith influence his art.

Though the trees outside were bare, Sherrill is known for botanical sculptures mimicking the flora that fills the woods with warmer weather—magnolia blossoms, rhododendrons, and leafy oak branches. His art has appeared in galleries at the White House, the Smithsonian American Art Museum, the Los Angeles County Museum of Art, New York’s Museum of Arts and Design, and, most recently, the ASU Art Museum in Tempe, Ariz. Working with metal, clay, and glass, Sherrill says he “uses artifice to create a world that speaks to what is true.”

What is true? Sherrill, a Christian, creates art that reflects the natural world, the human condition, and the Creator. In his sculptures, though, those ideas are subtle. Sherrill, 65, doesn’t call himself a “Christian artist” but simply remarks, “I’m a maker of stuff and a lover of Jesus.”

On a morning walk through the woods near his log cabin home in Bat Cave, Sherrill stopped to photograph a strange-looking mushroom. He often brings the outside world inside his studio, where branches and leaves hang from walls.

Those artifacts inspire Sherrill: His lifelike botanical sculptures are beautiful, yet appear scarred, bruised, and weather-worn. The imperfections give the pieces believability. They symbolize life continuing amid trauma. One of Sherrill’s favorites is Remnant—a blackened, dying oak branch that curves downward, its bark splitting and cracked. A cluster of withering leaves hangs from the end.

I’m a maker of stuff and a lover of Jesus.

Yet, one small branch grows upward with green signs of new life. The title alludes to the remnant of Israel that God promised to save. “There was always a portion that would be saved,” says Sherrill. “There would be life.”

Not all of Sherrill’s artworks mimic nature. At a recent Smithsonian exhibition in Washington, D.C., a room displayed teapots Sherrill created over a series of years. Some contorted or twisted into fantastical shapes, and some whimsicslly seemed to fit in a luncheon of Lewis Carroll’s Mad Hatter. Others, coated in 23-karat gold leaf, were molded into graceful arabesque gestures or elongated and twisted, like one dubbed “Jacob’s Ladder.”

As a young boy Sherrill tore apart clocks, toys, anything he could get his hands on: His mother said nothing mechanical was safe from her son. But his inquisitiveness led him to understand how things worked: “I was always the one who fixed her sewing machine for her.” 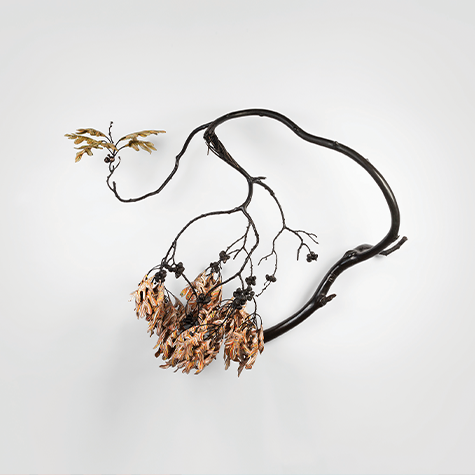 Dyslexia made school a struggle. He didn’t test well, but in high school he started making pottery. Around the same time, he says, his “heart started to come alive spiritually.” Sherrill grew up attending Sunday school but didn’t understand God’s transformative love until his teen years: He says God convicted him for lying to his mom about smoking dope and drew him through a few hippie friends with changed lives and the faithful prayers of his grandmother.

Today, when Sherrill sculpts, he sees God as the original Creator he emulates.

One of his pieces, Brightly Hidden, alludes to Genesis and the Fall: Below the bud of a dark, blooming flower, a bright green snake with sharp red eyes curls around a black stem.

Sherrill acknowledges artists can be a “weird, different” bunch, and says they often feel lonely. Art can be a way of expressing inner struggles. He quotes Vincent van Gogh: “A great fire burns within me, but no one stops to warm themselves at it. And passersby only see a wisp of smoke.”

Sherrill hopes his own “wisps of smoke” encourage passersby to stop and look.

—with reporting by Harvest Prude in Washington