Hundreds of thousands to help

Rohingya refugees fleeing from Myanmar are kept under tight security by the Bangladeshi military after crossing the border. Paula Bronstein/Getty Images

In Shamlapur, a fishing village in Bangladesh, 52 Rohingya Muslim families pitched their tents in the backyard of a local fisherman’s home. A communal well and latrine stood in a corner. Smoke from burning firewood wafted through the air. They all had terrible stories to tell: how Myanmar’s military killed their villagers and family members, how families had to separate to escape, how they struggled to pay for an expensive and risky boat ride across the Bay of Bengal into neighboring Bangladesh.

Other towns in Bangladesh have similar scenes. Hundreds of overcrowded tents and makeshift shelters sprawl to create refugee camps outside the city of Cox’s Bazar. Refugees there tell similar stories of rape, torched villages, and starvation—and they rarely show emotion. They are “just focused on surviving,” says Sandy, a ministry coordinator for Mission to the World (MTW), the mission arm of the Presbyterian Church in America. (Due to threats against missionaries we are giving only his first name.)

More than 600,000 Rohingya Muslims have arrived in Bangladesh since Aug. 25, on top of 200,000 who arrived after violence last year. Renewed clashes between Rohingya militants and security forces in Burma’s Rakhine state have created a massive new humanitarian crisis. The government of Myanmar, a predominantly Buddhist country also known as Burma, faces new accusations of ethnic cleansing and international condemnation. Myanmar and its predominantly Muslim neighbor Bangladesh have largely been closed off to Christian missionaries, but Christian aid groups are now in Bangladesh to help the Rohingya, and maybe have the opportunity to speak of Christ. 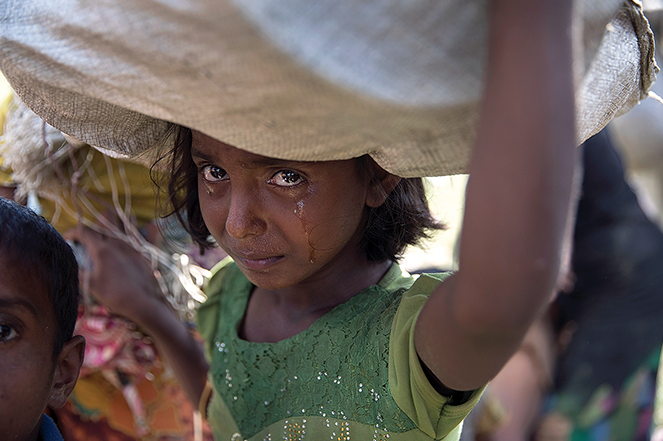 A Rohingya girl cries as refugees fleeing from Myanmar cross a stream in the hot sun on a muddy rice field near Cox’s Bazar. Paula Bronstein/Getty Images

THE LATEST CONFLICT began when militants with the Arakan Rohingya Salvation Army (ARSA) early on Aug. 25 stormed at least 30 Myanmar security posts in Rakhine state with guns and explosives, launching an attack the group called a “defensive action.” ARSA first emerged publicly with a similar attack last October—fighting, they say, for the liberation of the Rohingya. Rakhine state was then the home to the 1.1 million Rohingya Muslims. Burma, long ruled by a military junta, has denied the Rohingya citizenship or legal rights, branding them instead as illegal migrants from Bangladesh. David Eubank, director of Christian aid group Free Burma Rangers, said some members of the ARSA militia may have conducted terror acts, but the group’s fight is largely a reaction to oppression. “It’s a natural human reaction, when you’re systemically oppressed, to fight back.”

Myanmar troops responded to the attacks with “clearance operations” that went beyond the militants to target civilians and their villages. Aid group Médecins Sans Frontières, or Doctors Without Borders, said it treated 147 Rohingya with gunshot wounds between Aug. 25 and Sept. 12. Survivors in Bangladesh told MTW’s Sandy that first the army shot at them, and local Buddhist villagers followed with machetes to kill the wounded. Everyone ran. One man, disabled before the crisis, narrated his escape: “He crawled to a field and was later carried by other villagers,” Sandy said. Satellite imagery publicized by Human Rights Watch showed more than 200 Rohingya villages burned to the ground. In one village, only about 250 of the 1,450 villagers survived.

One 30-year-old woman identified as S.K. told Amnesty International the Myanmar soldiers separated the men from the women in the village of Min Gyi. They opened fire on the men, took the women into the empty houses, and stripped them naked. “They first hit us in the head to make us weak. … Then they raped us,” she said. Those who fled trekked for days to cross into Bangladesh. Some paid as much as $121 to take boat rides across the Bay of Bengal into Bangladesh, and at least 184 Rohingya drowned after their boats capsized at sea.

Those who made it to Bangladesh arrived into what Jared Berends, operation director of World Vision in Bangladesh, described as extremely cramped quarters. “There’s not enough toilets to go around, and people are having to defecate in the open,” he said after a recent visit. About 60 percent of the refugees are children, and aid agencies responding to the crisis have raised concerns of possible disease outbreaks. Somsida, an 11-year-old Rohingya Muslim, told World Vision she still wakes up from nightmares of people running and crying. “They’re traumatized and in shock,” said Berends. “The psychological scars will remain.” 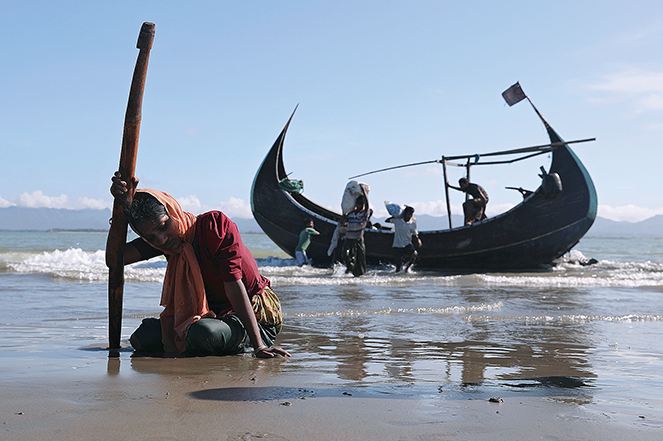 A woman collapses from exhaustion as Rohingya refugees arrive by a wooden boat from Myanmar to the shore of Shah Porir Dwip, near Cox’s Bazar. Paula Bronstein/Getty Images

World Vision in October targeted 65,000 people to receive food packages and plans to jump-start a longer six-month response that will include shelter, sanitation, and more nonfood support. Berends said he expects the scaled-up efforts to assist up to 100,000 people, but the group has to await approval from the Bangladeshi government.

As for MTW, the agency first responded with relief supplies. A local team bought goods from a market—including rice, potatoes, soap, and oral rehydration—and distributed them across some of the camps. Phil, the regional director of missionaries in Asia, said the disaster presents a unique opportunity for a more lasting impact on the refugees: “They’ve historically been a closed-off people, people without access to the gospel, so we’re understanding this as a very initial opportunity to enter into the community and build relationships.”

The opportunity will involve working with members of partner churches in Bangladesh who will visit the refugees, counsel them, and show hospitality. Christianity is a minority religion in the predominantly Muslim Bangladesh, and PCA partner churches in the country are in their first and second generations. Phil said the churches are excited to reach out to the Rohingya, but are stretched: The closest pastor drives about 18 hours to arrive at the camps in Cox’s Bazar. “We are praying that God would raise up the right people to establish a presence nearby,” Sandy said.

Meanwhile, more than 400,000 Rohingya Muslims remain in Myanmar, and many of them have no access to food as the Myanmar military has restricted aid into the region. Eubank said five teams of Free Burma Rangers already in Rakhine state deliver medical relief to some of the Rohingya. The teams hide in the mountains and move around on foot after dark to avoid security officials. “It’s difficult for our teams to come out and help because the moment they do, the army could arrest them.” Eubank said the organization plans to train its first Rohingya team from Bangladesh, since it will be easier for them to carry aid into the region. Eubank says he received weekly reports in October of military attacks against other ethnic minority groups as well in Myanmar’s Kachin state and the Paang ethnic group in northern Shan state.

At the UN General Assembly in September, Bangladesh Prime Minister Sheikh Hasina called for international pressure on Burma to ensure the country eventually repatriates the Rohingya refugees. Myanmar and Bangladessh in October announced they would work together to repatriate the refugees and secure their shared border. But Sandy said many of the Rohingya are not eager to return home: “Some said they would rather be thrown into the sea than go back to Myanmar.” 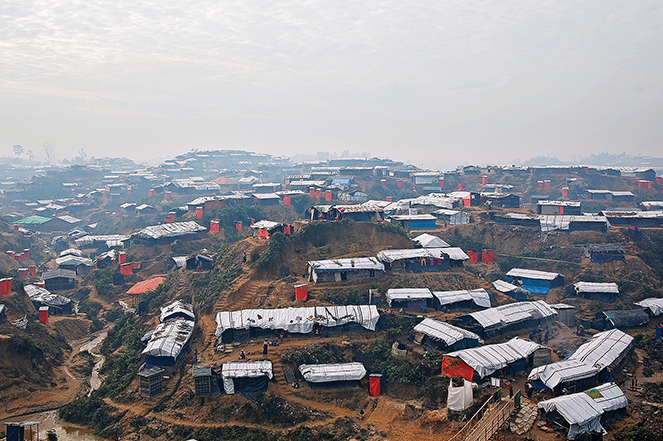 Burma’s leader, Aung San Suu Kyi, a Nobel Peace Prize winner, has drawn international criticism for her long silence on the Rohingya crisis. Suu Kyi received multiple international awards for opposing the country’s military regime and persevering under house arrest. In 2008, the United States awarded her the Congressional Gold Medal and lauded “her courage, determination, and personal sacrifice in championing democracy and human rights over the years.”

After 15 years’ house arrest, Suu Kyi won Myanmar’s first openly contested election in 25 years—assuming her office in 2015—but many see her as a figurehead whose purpose is to win Western approval. (The Obama administration lifted sanctions against Burma in 2016, hailing the government for “substantial progress in improving human rights.”)

Crucially, Suu Kyi doesn’t control Burma’s ministries of defense, border, and interior—Burma’s military does. International rights groups are calling for an arms embargo and sanctions against Myanmar’s military officials responsible for the attacks. They may have an ally in Sam Brownback, nominated by President Trump to be the new U.S. ambassador for international religious freedom. Brownback had pushed back against the Myanmar government’s persecution of religious minorities when he served as a U.S. senator. “I will fight for protection so that you will be able to exercise your religious freedom in peace from any government or group, period,” he said during an October confirmation hearing. “That’s what I have done in the past.” —O.O.