Christians face multiple threats in the midst of U.S.-Iran crisis over Iraq

In this 2019 photo, a house that once belonged to a Christian family lies in ruins, destroyed during fighting with the Islamic State, in Bartella, Iraq. Fay Abuelgasim/AP

It’s nearing midnight in Iraq’s Nineveh Plain when Behnam Benoka sets off on pastoral visits to families living in Bartella.

“It’s important I am available to meet with them in their homes at this hour,” the Syriac Catholic priest said when I reached him by phone. “We wake in the night due to the situation, and people are worried.”

Barely two hours after we spoke Tuesday, Iran launched ballistic missiles that hit Iraqi installations where American and coalition forces are based. The barrage was the first significant counterattack since a pre-dawn drone strike on Jan. 3 by the United States killed Iranian Gen. Qassem Soleimani and other military commanders.

An estimated 22 Iranian rockets targeted Ain al-Assad air base in Anbar province and a coalition base near the Erbil international airport in Iraq’s Kurdish north. One rocket also landed not far from a Syrian refugee camp at Bardarash. But Iraqi and U.S. authorities said there were no casualties in the assaults. Sporadic bombings continued into Wednesday, also without reported injuries or deaths. 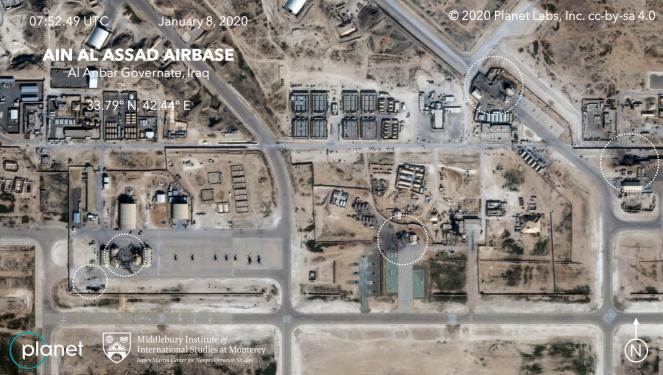 This satellite image shows the damage caused from an Iranian missile strike at the Ain al-Asad air base in Iraq. Planet Labs Inc./Middlebury Institute of International Studies via AP

Threats from Iran aren’t news to Benoka and his parishioners, who returned to their homes and church in Bartella in April 2018 following the town’s liberation from the Islamic State group. So-called security in the area since that time is controlled by the Popular Mobilization Forces (PMF), the Iraqi militia backed by Iran under Soleimani’s elite Quds Force.

Soleimani helped form the PMF units to bolster the Iraq Army in its campaign to defeat ISIS starting in 2016. But then Soleimani deployed the units as a security force, projecting Iranian control across areas that since 2014 ISIS had controlled. Many of these were Christian communities stretching back more than a millennium until ISIS emptied them.

Christians seeking to return to towns like Bartella initially welcomed militia presence, seeing it as protection against the Islamic State’s return. But they soon learned the militias were bent on controlling their homelands.

By 2017 the PMF had raised Shia flags and banners, depicting Iran’s mullahs, at the entrances to what had been majority Christian towns. In Bartella they urged boycotts of Christian businesses struggling to reopen. In 2018 local PMF units blocked the street leading to Benoka’s St. George’s Church, preventing worshippers from attending. In December that year, they opened fire on the church. Benoka went into the street to demand they stop shooting. A local PMF member grabbed him and briefly held him with a handgun pointed at his face.

In 2019, threats continued. Shia gunmen fired on a Palm Sunday procession in April, forcing churches to curtail Easter celebrations. With PMF support, the local Shabak, or Shia population, have moved into residential areas once occupied by Christians and erected loudspeakers atop public buildings to broadcast Muslim prayers. St. George’s has continued to hold services, Benoka said, including at Christmas. But for the first time, last month there was no Christmas tree in Bartella.

Only about one-third of the town’s pre-2014 Christian population has returned—about 4,000 people. As Soleimani’s influence in Iraq grew, Iran’s Shia militias “put our existence in peril,” Benoka said.

Other towns in Nineveh report similar harassment. The PMF militia in Qaraqosh entered homes and reportedly assaulted Christian women and girls. Since the killing of Soleimani, said Qaraqosh resident Yohanna Towaya, “The situation is very, very tense and no one knows what is going to happen.”

The strike killing Soleimani caught Americans and those living in the Middle East by surprise but capped months of escalating tension between Iran and the United States. Besides attacks on shipping vessels in the Gulf of Oman and an attack on Saudi oilfields last year, Iran increasingly had targeted U.S. military installations in Iraq. In late December after a rocket attack at a base in Kirkuk killed a U.S. defense contractor, the United States responded, killing 25 fighters with the Iran-backed Khataib Hezbollah in an airstrike on Dec. 29. 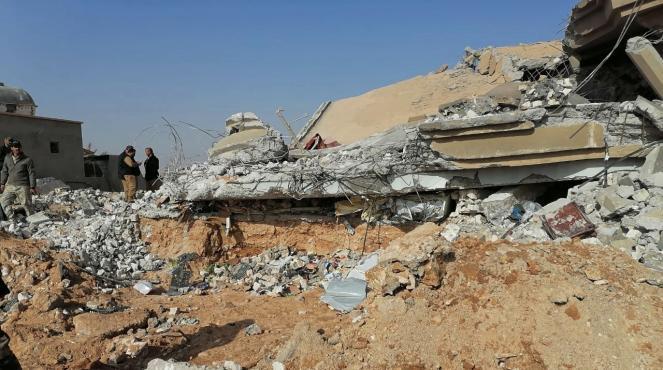 Damage from the airstrike in Qaim, Iraq. Associated Press

For now, Christians in Iraq feel more vulnerable than ever before. ISIS once again is threatening attacks. In Bartella, the local PMF militia pulled back from its base in anticipation of U.S. airstrikes, leaving the town under the protection of 24 poorly armed members of a Christian militia. Yet the PMF militias remain nearby, armed by Iran with tanks and heavy weapons.

“What they have is no comparison to what we have,” said Benoka. “They can kill us in one hour.”

Qassem Soleimani emerged as a potent adversary early in the Iraq War. Gen. David Petraeus in 2007 described him as “a truly evil figure” in a letter to then-Secretary of Defense Robert Gates.

Leaked cables and other reports from Iranian intelligence officers, published by The Intercept and The New York Times two months ago, showed the extent of Soleimani’s power. In 700 pages of documents, they reveal the lengths the Quds Force commander went to infiltrate the Iraqi government starting with the departure of U.S. troops in 2011. Political leverage grew into military advantage as Soleimani deployed militias to help beat back ISIS.

While United States efforts largely were confined to lending air support, Soleimani became a known figure in Iraq, his face familiar as he showed up to organize ground assaults against ISIS in Tikrit, Mosul, and elsewhere. Authorizing his PMF units to take over security in liberated areas was a pragmatic move for the overextended Iraq Army. But it made Christians, Yazidis, and other minorities second-class citizens once again.

Frustration with Iran’s role in Iraq took a surprising turn last fall. In Baghdad and southern, largely Shiite cities thought to be sympathetic to Iran, students and young organized protests against Iran’s presence, leading to the Nov. 29 resignation of Prime Minister Adil Abdul-Mahdi, long closely allied with Tehran. He continues in the post until the Iraqi parliament approves a replacement.

The protests grew day by day, despite violent crackdowns that left hundreds dead. And they have continued, even with mounting tension following the U.S. attack that killed Soleimani. On Jan. 7, PMF units and other Iranian-backed militias burned tents and opened fire on protesters in Basra and Nasiriyah.

The street uprising got little attention in the United States, particularly as a seeming outpouring of public grief followed the attack on Soleimani’s convoy. Church leaders I spoke to, like Benoka, said Christians feel solidarity with Muslim and secular Iraqis. But they also believe they are uniquely vulnerable.