Documentary filmmaker Kiwi Chow, 42, poses for a photograph at Kwun Tong Ferry Pier near his studio in Hong Kong on June 18. Reuters/Lam Yik

Hong Kong filmmaker Kiwi Chow was participating in a discussion of his 2019 romance movie Beyond the Dream after a private screening on Aug. 27 when government officials and police barged into the room. Derek Chu, a pro-democracy district councilor, had invited Chow to his Mong Kok office for the screening, which he opened only to friends. But authorities accused the 47 attendees of breaking COVID-19 safety measures that limit public gatherings to four people.

The officials claimed the event was public, not private, because two undercover officials had gained entry. They fined attendees about $640 each.

Yet Chow believes the raid was less about the pandemic and more about politics: In July, his documentary about the 2019 Hong Kong protests, Revolution of Our Times, premiered at the Cannes Film Festival in a surprise showing. The film will not be shown in Hong Kong, as the national security law imposed last year has silenced criticism of the Chinese government in the once freewheeling city.

Still, Chow points to his Christian faith as the reason he’s decided to stay in Hong Kong and not bow to fear. As the only member of the documentary’s production team to reveal his name, he’s become not only the face of the film but a target for the government.

Besides arresting pro-democracy figures, banning public gatherings, and shuttering the city’s only pro-democracy print newspaper, authorities have put the Hong Kong film industry in their bull’s-eye. In June, the government implemented new guidelines allowing censors to ban films that threaten national security. Two months later, it announced plans to extend censorship to films previously allowed to screen in the city.

Chow noted in local media that if the officials had meant to enforce social distancing at the August event, they could have ended it sooner instead of waiting until his post-screening discussion. In an interview posted on YouTube, he wondered if they were waiting to see if he would also show Revolution of Our Times.

The documentary chronicles the 2019 pro-democracy protest movement, which the regime wishes to scrub from Hong Kongers’ memory. Its title evokes the banned protest slogan—“Liberate Hong Kong, revolution of our times”—that authorities have deemed seditious. Running 152 minutes, it is the longest and most comprehensive documentary on Hong Kong’s protests thus far. Its gripping trailer features prominent protest leaders Benny Tai and Joshua Wong, who are now serving jail time for protest-related convictions. It also includes other participants of the movement, such as radical front-line demonstrators, elderly mediators of Protect the Children, and volunteer medics. 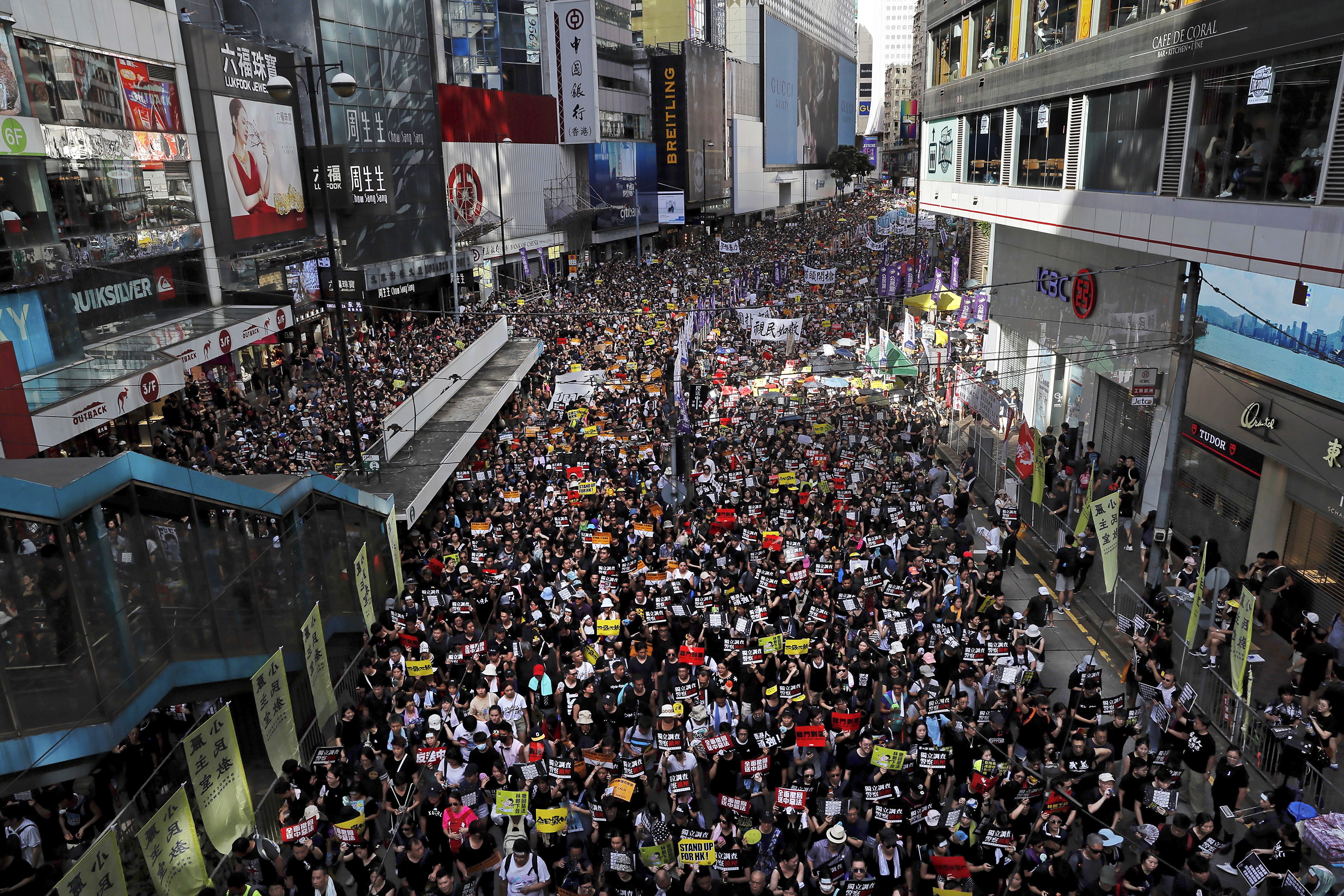 Tens of thousands of pro-democracy protesters flood Hong Kong streets on July 1, 2019, during a rally marking the anniversary of the former British colony’s return to China. AP Photo/Kin Cheung

Chow told Australia’s SBS news service that he stepped into the limelight out of a sense of justice and responsibility toward his interviewees. At the same time, Chow sold the film’s copyright to a friend in Europe and sent all the raw footage overseas to mitigate risks.

Friends around Chow have urged him to leave the city to avoid becoming a political prisoner like some of the pro-democracy leaders he interviewed in the film. But Chow has no plans to flee. “If I leave, I will be clamped down by fear,” he told CGST Magazine, a Hong Kong Christian magazine. “I want to stay in Hong Kong to find my spiritual freedom. You can imprison my body, but can’t imprison my soul and can’t limit my faith.”

Growing up, Chow had a difficult relationship with his father, who spoke little to him. But his father would take Chow to the theater to watch action movies, he told CGST. As a teen, Chow watched three movies a day. One that resonated deeply with him was the 1955 Hollywood film East of Eden. Watching the depiction of a son’s unfulfilled yearning for a father’s love, Chow broke down in tears. He was watching his own struggle on the screen, he said.

Films took on the role of a “substitute father” to Chow, becoming “a guide to life for me growing up, teaching me love and acceptance.” He decided to dedicate his life to filmmaking and studied directing at the Hong Kong Academy for Performing Arts.

Because of the strained relationship with his father, Chow resisted Christianity and the concept of God as a Father. But around the age of 26 or 27, he attended a church service at the invitation of a friend. Challenging God, he prayed, “Do You really exist? I’m praying once, and if You don’t answer, I’ll never come back to church!” Instantly, an image from East of Eden flashed in his mind. He realized he was the rebellious son who needed to accept the forgiveness of his heavenly Father, Chow told CGST. That realization made him weep. “He connected with me in a way that was suitable for me,” Chow said. Realizing God “had never left me,” he professed faith in Christ.

In 2015, Chow directed a portion of Ten Years, a dystopian film comprising five vignettes that imagines what Hong Kong would be like in 2025 under Beijing’s tightening grip. Chow’s vignette, Self-Immolator, depicts riot police cracking down on escalating protests while one activist sets herself on fire to defy the government. He wanted to ask the question of how much one is willing to sacrifice for Hong Kong.

The movie proved prescient as some of its scenes became reality in the 2019 protests and the ensuing imposition of the national security law. At the time of its release, Ten Years faced backlash for its criticism of the Chinese government: Theaters in Hong Kong refused to screen it, while Chinese state media criticized it. For Chow, it became more difficult to find investors and actors for his subsequent work.

Still, Chow’s next project was a hit. Beyond the Dream, a love story between a man with schizophrenia and a female counselor, came out in 2019. That year, Chow switched between promoting his romance movie and filming Hong Kong’s protests. 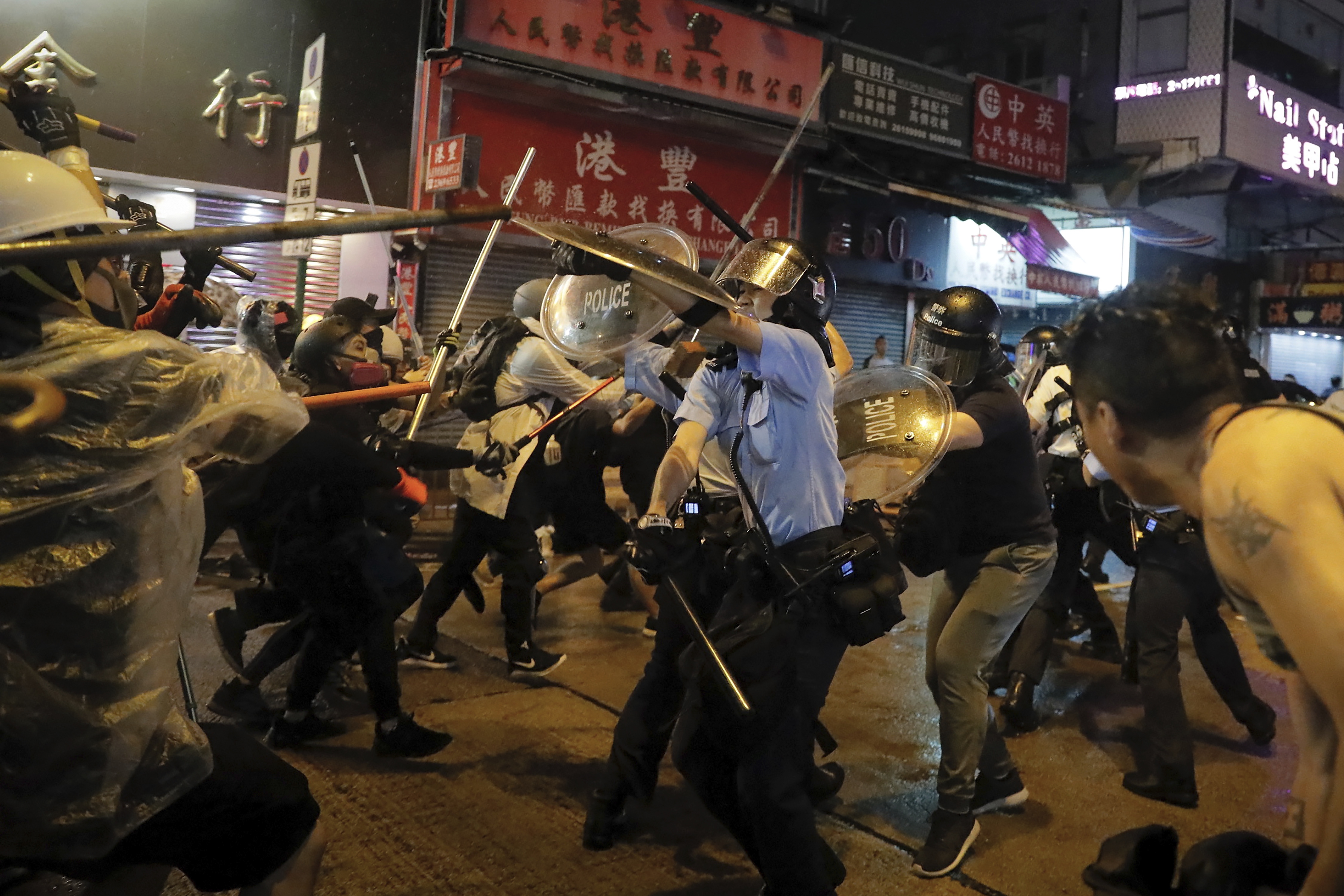 Police clash with pro-democracy demonstrators during a protest in Hong Kong on Aug. 25, 2019. AP Photo/Kin Cheung

As the protests grew violent, the director sprained his ankle dodging a protester’s Molotov cocktail. One time a police officer’s rubber  bullet hit Chow’s helmet. At another point, a protester angrily confronted him about filming, suspecting he was on the side of the authorities, Chow told Citizen News. Panicked, Chow blurted out he was the director of Ten Years. That softened the demonstrator’s demeanor: He had seen the movie. He allowed the filmmaker to keep recording.

Editing Revolution of Our Times took an emotional toll on Chow as he immersed himself in the intense images from the protests. He cried throughout the editing process and didn’t hide his emotions from his 6-year-old son, he told Hong Kong Free Press. Chow took the opportunity to teach his son about democracy and totalitarianism.

Since becoming a Christian, Chow’s priorities have changed, he told CGST: “Film is no longer my most important pursuit but faith is.” That faith informs the way he lives, including his decision to stay in Hong Kong and speak out.

“All of my thoughts and behavior should not be determined by the so-called red lines under the national security law,” he told Hong Kong Free Press. “I should be led by the teachings in the Bible.”