Pro-democracy protests continue unabated as supporters rally to the cause

Protesters in Hong Kong on Friday hold hands to make a human chain. The Yomiuri Shimbun via AP Images

On Sunday in Hong Kong, an estimated 1.7 million people turned out under a pouring rain in a massive protest for democratic freedoms. It was the first peaceful weekend in 11 weeks of rallies and marches as the Hong Kong people continue to demand democratic representation and oppose a controversial extradition bill.

Things have changed since the protests began in June. Mark Sin, a 29-year-old university administrator, recalls watching protesters flee in different directions as police fired tear gas at demonstrators during a June 12 rally.

“None of us had any gear, not like now,” said Sin.

Today, protesters who plan to be in the front line come prepared, with gas masks, eye goggles, and helmets. Hong Kong police have fired 1,800 rounds of tear gas this summer, along with beanbag rounds. A woman whose right eye was severely injured by a beanbag round has become a symbol of the protests, with demonstrators covering their right eyes with bandages to symbolize police brutality. “Corrupt cops, return the eye!” they chant at rallies.

Along with calling for the withdrawal of the extradition bill, protesters had four other demands: an independent commission to investigate police brutality, a retraction of the government’s description of the June 12 protests as “riots,” the unconditional release of arrested protesters, and elections reflecting universal suffrage.

Despite peaceful rallies in June that drew up to 2 million residents, Chief Executive Carrie Lam refused to withdraw the extradition bill, which could force Hong Kong citizens to stand trial in China. Instead, she only agreed to suspend the bill, and many people in Hong Kong fear the government will take it up again if they stop protesting.

“The violent acts of the movement have been forced by the government,” said Agnes Woo, a 26-year-old office clerk whose name WORLD has changed for her protection. “The government never directly addressed people’s demands—then protesters faced excessive police force.”

Mainland China has also flexed its muscles, releasing videos that show the People’s Armed Police holding exercises across the border in Shenzhen and decrying “radical Hong Kong protesters” whose actions show “signs of terrorism.” Beijing has launched a censorship and disinformation campaign through social media and state-controlled media.

This week Twitter removed 936 accounts and suspended about 200,000 accounts that it believed were part of a state-backed operation to “sow political discord in Hong Kong.” The tech company also announced it would stop allowing state media to purchase ads on the platform. Facebook and YouTube have followed suit, shutting down accounts linked to the Chinese government.

China has also detained a Hong Kong staffer of the British Consulate who visited Shenzhen for a business event. Simon Cheng, 28, went missing after boarding a high-speed train back to Hong Kong on Aug. 8. Chinese officials said Cheng is serving 15 days of administrative detention, while the nationalist tabloid The Global Times claimed he was detained for visiting prostitutes. Cheng’s family dismissed the prostitution claim on Facebook, saying, “We can all take this as a joke.” The Chinese government often arrests critics with trumped-up economic and sex charges, according to The Guardian. 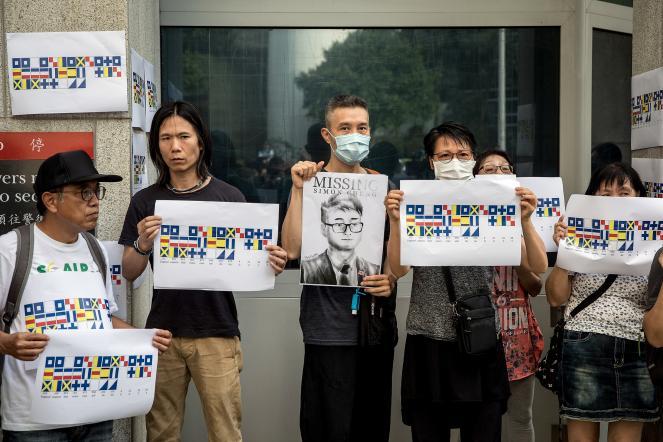 Hong Kong’s flagship Cathay Pacific Airways is also feeling the heat. After some Cathay employees participated in a general strike earlier this month, Beijing rebuked the company and banned pro-democracy supporters from working on flights to China. Last week, CEO Rupert Hogg resigned amid pressure from Beijing, and the company fired several employees for participating in the protests.

Flight attendant Rebecca Sy said Cathay Pacific fired her over Facebook posts about the protests, adding, “All my colleagues are terrified because of this ‘white terror.’”

As new pro-democracy protests continue in Hong Kong each week, David Chu, a bank clerk who attended Sunday’s rally, said he believes it is worth the risk. “I think if in the future we don’t [gain our] demands, the violence we face from this regime will be far more horrific and serious than tear gas or beanbag rounds, because by then we might lose our freedom of speech and our freedom of thought.”

Intimidation in Canada: Pro-Beijing protesters surrounded a church in Vancouver that was holding a prayer meeting for Hong Kong. About 100 protesters waved Chinese flags as police escorted the Christians out of the building at the end of the service.