Two decades ago, Kevin Sorbo was busy slaying dragons. As the star of Hercules: The Legendary Journeys, Sorbo pranced around in 12-pound, glute-hugging leather pants and a chamois shirt that revealed sculpted pectorals. The popular Greek mythology TV series ran for six seasons from 1995 to 1999 and gained a cult following around the world.

Sorbo’s wife Sam (then known as Sam Jenkins) also played on the show, cast as the beautiful Serena, a mortalized Golden Hind who captured Hercules’ broken heart. That happened in real life, too: The actors met on set while shooting Hercules and knew “right away” that they were in love. It helped that both were Christians and that Sam found Kevin a “normal nice guy” instead of the big-ego stud she had expected. Then when Sam found out he was a conservative as well, she thought, “Oh good, he’s not insane.” Six months after they met, Kevin proposed. They wedded in 1998 at a tiny chapel in Los Angeles.

The Sorbos are a rare pair in Hollywood: They’re conservative evangelical Christians in an industry that swings far to the left—and they’re willing to voice their opinions at a politically fraught time when the few conservatives remaining in Hollywood feel pressured to hide in the closet, fearful of being blacklisted.

During the 2016 presidential election, for example, Kevin Sorbo received public backlash for supporting Donald Trump and saying Jesus would have voted for Trump as “the lesser of two evils.” Meanwhile, Sam hosted a nationally syndicated radio show, The Sam Sorbo Show, for almost four years, talking about religion and politics. The Sorbos are also vocal advocates of homeschooling, and Sam published a hard-hitting book criticizing the liberal agenda within government-run education. 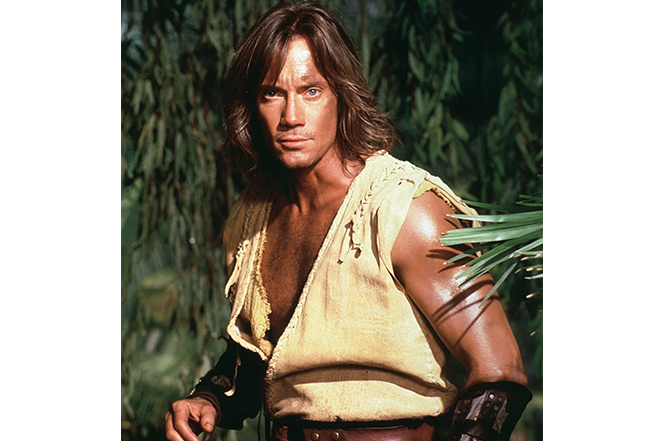 Conservative actors, producers, directors, and screenwriters can remember a time as recent as 20 years ago, back when Hercules was running strong, when they felt safe to air their conservative views to friends in the industry. That’s no longer the case: Conservatives in the entertainment industry today say they feel shut down and shunned as political acrimony grows in an already left-leaning Hollywood. Politics seeps into TV shows and movies that push pro-LGBT narratives. It takes front stage at the Golden Globes and the Emmys, where celebrities lambasted President Trump and applauded when Hillary Clinton read an excerpt from Michael Wolff’s gossip-laced book Fire and Fury.

According to unofficial estimates, the number of conservatives working in the local entertainment industry ranges around a few thousand individuals—a mere blot out of the 180,000 entertainment-related jobs in Los Angeles. Some well-known figures in the industry such as Clint Eastwood, Gary Sinise, and Tim Allen remain outspoken about their political stances, but many others keep their red stripe secret. In Hollywood, politics can greatly affect a person’s career because people spend long hours together on sets and projects, and producers like to hire people who fit in and won’t cause conflicts.

‘Hollywood has an agenda, let’s face it. They put out so many violent movies full of sex, violence, and hate. … Why can’t we have more feel-good, good-message movies?

Kevin Sorbo said he has noticed a huge drop in calls from big studios in the last decade and said it would be “a shock” if he was ever cast in a blockbuster movie again: “I don’t get it. In the last 50, 60 years there’s been this slow brainwashing going on from the left, but now, it’s open warfare.”

Today the Sorbos still attend some movie premieres (like Clint Eastwood’s The 15:17 to Paris) and book speaking engagements, and they recently made a faith-based drama film together. But the more vocal they are in their viewpoints, the more they feel removed from the Hollywood bubble, and they say they’ve never really cared for the schmooze parties with the predictable cliques.

I visited the Sorbos twice—once at their kids’ weekly homeschooling classes at a local co-op, then at their house in Westlake Village, a mountain-hugging bedroom community in Los Angeles. The Sorbos have done well in their careers: They live above a gated driveway in a multimillion-dollar, Mediterranean-style villa that includes a pool, a gym, and a state-of-the-art theater on a 1.5-acre private estate growing avocado, orange, apple, apricot, plum, and lemon trees.

On a Thursday morning, I sat in their dining room, a sun-trickled space with vintage fabric armchairs and a grand chandelier. On the wall hung a man-sized framed painting of Kevin Sorbo as Hercules, with his trademark chestnut tassels and bulging biceps. It was a nod to the old days when a show like Hercules—feel-good, lighthearted entertainment featuring an upstanding hero who naturally does what’s right—could rake in millions of views in 176 countries.

Hercules paintings aside, the Sorbos’ house was otherwise quiet and homey. Their golden mutt Hunter snored loudly underneath the dining room table. Sam wore a magenta jacket, jogging pants, and a blue cap, having just gone for a walk that morning at the nearby golf course while Kevin played his usual quick morning golf. Upstairs, their two teenage sons, Braeden and Shane, were working on Latin and math, while their 12-year-old daughter Octavia sat at the kitchen table practicing her spelling. 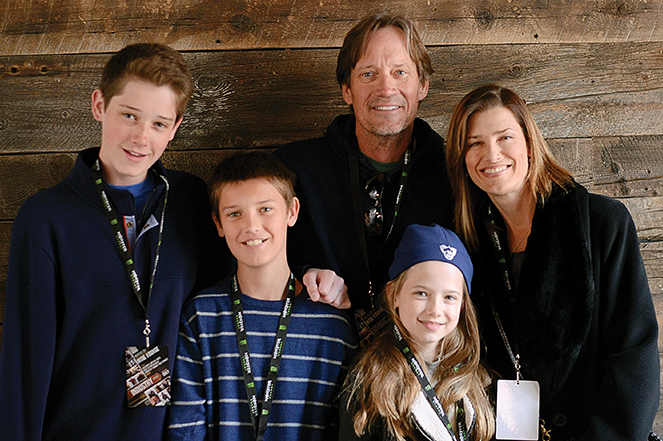 The Sorbos first moved to their neighborhood for its well-rated public schools, but now they homeschool their kids, using a classical Christian curriculum. Sam was once an active volunteer in her oldest son Braeden’s elementary school, busy baking cookies, grading papers, and helping out in the classroom. One day, she asked the teacher about Braeden’s book reports, and the teacher responded that his book reports weren’t very good. Sam was shocked: By then Braeden had already submitted five book reports, yet the teacher hadn’t graded them or informed her that her son’s work was subpar. So the next day, Sam sat her son down after school for 45 minutes to teach him how to write a well-composed book report. As Braeden complained about the extra work and Sam pushed him on, she realized, “Hey, this is homeschooling. I’m doing the teacher’s work—except we’re doing this when we’re both tired and cranky!”

Then when Kevin had to fly off to Oahu, Hawaii, to shoot the movie Soul Surfer for several weeks, his family came to visit him, because the Sorbos had made a pact early in their marriage never to stay more than two weeks apart. During those couple of weeks by the beach, Sam gathered her children around the dining room table every morning to complete their math and writing assignments for school. Again, she realized she was already homeschooling her kids, and she was providing one-on-one care they couldn’t get in a 30-student classroom. As she did more research, she decided she didn’t like everything schools were teaching either, so the Sorbos pulled their kids out of school and began homeschooling them.

Sam now travels the country advocating for homeschooling—and has gotten some flak for it. At one event hosted by preschool mothers, she spoke about the dangers of what public schools are teaching children. A leader then stepped up to the stage and asked her to leave because she was making people feel uncomfortable. Sam said she was “devastated,” but that incident made her more determined to speak up: “We Christians have been cowed. ... I’m just pursuing truth, that there is even such a thing as the Truth.”

Tired of seeing the secular culture challenge her children’s faith every day, Sam wondered what it would look like for Christianity to challenge an atheist’s beliefs. That led to a script that became the 2017 film Let There Be Light, funded by conservative commentator Sean Hannity, directed by Kevin, written and produced by Sam, and starring the Sorbos and their two sons. In it, Kevin plays a hedonistic atheist who has a “Road to Damascus” moment after a near-death experience and reconciles with his family. While some critics called it a “heavily proselytizing” drama, they praised the Sorbos’ performance, and the movie made $7.2 million on a $3 million budget.

Let There Be Light is just one of several commercially successful faith-based films that have mystified Hollywood filmmakers. God’s Not Dead, starring Kevin Sorbo as an atheist professor, was a surprise box office hit in 2014, raking in more than $60 million on a $2 million budget. Last year’s The Case for Christ, a biopic of atheist-turned-apologist Lee Strobel, earned $17.6 million on a $3 million budget. Most recently, I Can Only Imagine, a movie about Christian songwriter Bart Millard, nabbed $17.1 million in its opening weekend, placing third on the box office list.

While Hollywood analysts scratch their heads about how such explicitly Christian projects with low budgets and little marketing could have performed so well, Kevin Sorbo explains it this way: Major moviemakers have forgotten about a sizable audience that prefers its entertainment clean, inspirational, and uplifting, with good old family values such as redemption, forgiveness, and love. “Hollywood has an agenda, let’s face it,” he said. “They put out so many violent movies full of sex, violence, and hate. … Why can’t we have more feel-good, good-message movies?” 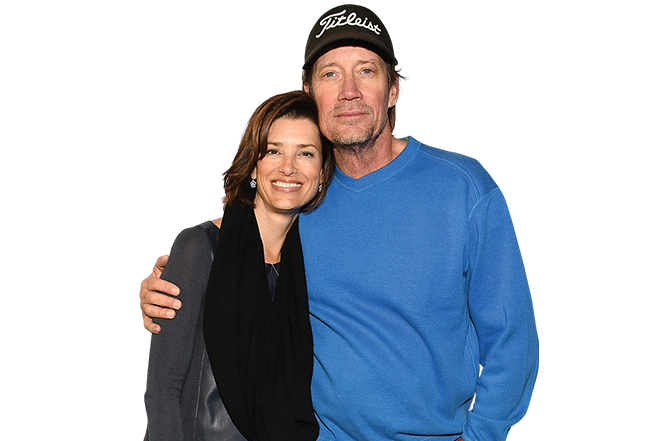 And that’s the kind of content the Sorbos plan to continue creating. They just released Let There Be Light on DVD, along with a book with 40 devotions that delve into the movie’s themes of family, faith, forgiveness, grief, and redemption. This summer, the Sorbos are inviting people to join them on a 10-day trip to Israel to “follow the light in the footsteps of Jesus.” A film crew will shoot the journey, and the entire Sorbo family will be there to commemorate the 70th anniversary of the establishment of the state of Israel—and to celebrate the God-man born there two millennia ago.

Meanwhile, it seems that shooting Let There Be Light has bitten the Sorbos’ two sons with the acting bug. Both kids, ages 16 and 13, are taking acting classes and talking of becoming actors. Sam is ambivalent about their Hollywood ambitions—“It’s a tough industry,” she says—but she also remembers when she was a gangly young nerd who dreamed of becoming an actor but received little encouragement to pursue her dreams. After studying biomedical engineering at Duke University, she finally took the leap and moved to Los Angeles, where an acting coach asked her, “Why do you want to act?” She responded earnestly, “To change the world.” She still believes in that purpose, even if the world of Hollywood has put up a wall against conservative Christians like the Sorbos.

But perhaps that’s why Hollywood needs the Sorbos—it doesn’t quite yet understand their audience. Like their filmgoing fans, the Sorbos are outsiders at heart—skirting the social circles of Hollywood, in the industry but not of it. And they’re fine with that, because they know they don’t belong here. And they know they’re not alone.

Hear more from Kevin and Sam Sorbo on Listening In with Warren Cole Smith.

Nicely written article, Sophia. I feel encouraged to pray for the Sorbos and their compatriots in Hollywood. It is an arena much needing the light and love of Christ.