The move toward swallowing abortion pills at home takes us back to an earlier era when abortion-seekers avoided surgical abortion, a risky proposition for women not only morally but physically, due to the great risk of infection. Abortifacients—potions designed to produce abortion—included oil of savin, ergot, rue, tansy oil, and wormwood, all of which caused a horrible shock to the entire body of the maternal user. Dosage was key, and effects could range all the way from a slightly upset stomach to death of child or death of mother and child.

U.S. Supreme Court Justice Harry Blackmun based his 1973 Roe v. Wade decision more on erroneous history than the Constitution. Blackmun attempted to show that laws against abortion date from the 19th century, which means before that men could force women to swallow the potions without facing any legal penalty. Blackmun wrote, “It is undisputed that, at common law, abortion performed before ‘quickening’—the first recognizable movement of the fetus in utero, appearing usually from the 16th to the 18th week of pregnancy—was not an indictable offense.”

That’s just plain untrue. The secret use of abortifacients was hard to prosecute, but difficult is not the same as legal. Let’s go back to the 17th century and see what a forgotten but fascinating tale shows us about early America’s common law. The site: Charles County, Maryland, 35 miles southeast of the Supreme Court building in Washington, D.C. The story starts in 1656, when Mary-Land (the original spelling of the colony founded in 1634) had about 8,000 residents, including an ardently pro-life woman, Elizabeth Claxton.

That year Claxton bravely swore that a landowner, Francis Brooke, beat his mistress (unnamed in court records) and made her drink wormwood. Brooke had an illustrious last name shared by a former governor of the colony and two centuries later the U.S. Supreme Court’s chief justice, Roger Brooke Taney, who presided over the Dred Scott case in 1857.

Unawed by Brooke’s influence, Claxton testified that she had approached him and “asked him if he longed to be hanged.” The evidence: Midwife Rose Smith had delivered from the mistress a dead 4-inch unborn child, and testified that he “was a man Child about three months old.” It’s strange that Claxton would say such killing was a hanging offense if abortion of an unborn child less than 4-5 months old wasn’t a crime.

The case had an unusual conclusion: Brooke’s mistress said she wanted to marry him, despite what he had done to her and their child. Maybe she loved him, maybe she just wanted his money, but she knew from then on that Brooke was a marked man and would have to treat her decently—or else suffer social isolation and legal punishment.

Brooke accepted the deal because he did not want to be hanged: His mistress, once married, would no longer testify against him, and midwife Smith could not swear that the unborn child’s death was not via a natural miscarriage. But word spread in the small Mary-Land community: One way to marry a wealthy landowner was to bring a claim of forced abortion.

—This story appears in the Jan. 30, 2020 issue under the headline “Historical fiction.” 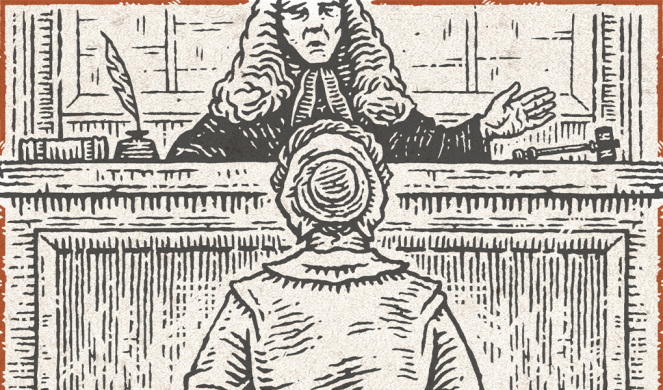 That’s important because as the Brooke case was being decided, a middle-aged jack-of-all-trades arrived in Mary-Land. During the next decade Jacob (sometimes called John) Lumbrozo was a doctor, lawyer, planter, innkeeper, wolf-hunter, and somewhat of a wolf himself, according to court cases, of which there were many. He had been financially successful in Portugal and Amsterdam. He was also Jewish.

When Lumbrozo gave legal help to neighbor John Hammond, Hammond refused to pay what he owed and said (according to Lumbrozo), Let’s make a deal: You can have sex with my wife. Hammond denied that, sued Lumbrozo for defamation, and won the case against “ye Jew doctor.” Lumbrozo had to pay 5,000 pounds of tobacco, worth about $10,000.

It wasn’t unusual for landowners to have sex with servants. In 1663 Lumbrozo employed Elizabeth Wieles, 22, a recently arrived immigrant from England. If her situation was typical, she headed across the Atlantic because few things had gone right for her at home. She was probably destitute and without parents or siblings who wanted her around.

In one sense Mary-Land was a patriarchy, but Monica Witkowski threw new light on social relationships in her 2010 Marquette University dissertation, “‘Justice Without Partiality’: Women and the Law in Colonial Maryland, 1648-1715.” Witkowski wrote that the women she studied exhibited “a sophisticated understanding of the legal workings of the colony. Many colonial women also understood how to manipulate the legal system to procure a more favorable outcome.”

IN THAT LIGHT I STUDIED Maryland archival records about what a neighbor of Wieles, George Harris, told a Charles County jury on June 29, 1663: He said Wieles had told him two weeks earlier that Lumbrozo “tooke her to bed and had layne with her whether shee woold or no, whearof before shee coold Consent to ly with him hee tooke a booke in his hand and swor many bitter oaths that hee woold marry me.” The book he allegedly swore on was probably a Bible.

Premarital sex was not unusual in many of the colonies. One advice manual for young women did not say “no sex before marriage.” It said do so if you wish, but only if you have a signed statement from the man pledging marriage. Wieles gave in before getting Lumbrozo’s word in writing. Then he backed away. The dispute may not have ended up well for Wieles—but, having probably learned about the Brooke precedent, she played an ace, telling fellow servants and others she had become pregnant and Lumbrozo had pushed her to abort.

Wieles supplied no evidence of that. While purportedly pregnant she told no one about it. No one ever saw an aborted child. In any event the child had not quickened: She told several people that after Lumbrozo gave her an abortifacient she expelled a blood clot. On June 27, even though no law specifically declared abortion to be an offense, Charles County jurors indicted Lumbrozo for a felony based on his servant’s “publick Confession tht she was with Child by Lumbrozo and that hee did give her phisick to destroy it.”

So much for the Justice Blackmun supposition that common law allowed abortion and that, at least before quickening, it was not an indictable offense. But let’s also bury the notion that the law was inhumane toward women. ­Wieles still wanted what Lumbrozo had promised, marriage. She wanted it so badly that she apparently made a deal with her employer: She would say she had lied, and he would marry her. 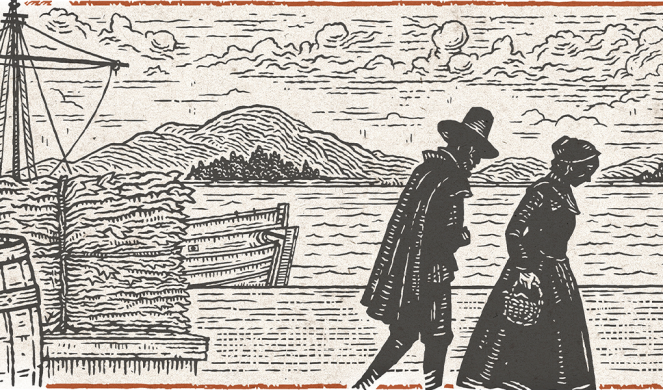 She then told the jury: “What I have said Concerning Lumbrozo it is false, for hee left mee no such things which I reported.” That she “was with Child by the doctor and lay with him every night”: False. That Lumbrozo gave her an abortifacient: False.

The jurors were startled. They questioned a friend of Wieles, one Margaret Oles: What happened? Oles testified that Wieles had asked her advice on how to testify: “whether it was best for her to clear [Lumbrozo] or no.” Thus advised, Wieles pleaded with the jury that Lumbrozo “bee Cleare from the scandal that I rise upon him for what it was spoken I did Rise of mee owne head and further say not.”

Jurors could have indicted Wieles for perjury, but they preferred a happy ending. We know Lumbrozo married her within five months of the trial, because a bill of sale dated Nov. 16, 1663, identified her as Elizabeth Lumbrozo. The provincial court dropped the case. We still do not know if that abortion ever happened.

The good news is that the Lumbrozos must have gotten along, because Lumbrozo’s will dated Sept. 24, 1665, left almost everything (including thousands of pounds of “well-conditioned tobacco”) to Elizabeth Lumbrozo, “my Dearly beloved wife,” and made her his executrix. The following year Mrs. Lumbrozo gave birth to a son.

Lumbrozo noted in his will, “I bequeath my soul to God.” He also bequeathed his story to historians willing to pay attention. The common law, unwritten but understood, declared abortion even before quickening to be murder.

During the decades since 1973, many law professors from a variety of persuasions have decried Justice Blackmun’s legal reasoning, yet left alone his faulty history. The importance of that history is evident in the way The New York Times repeatedly revisits it. Georgia State historian Lauren Thompson declared in a December 2019 column: “In the 17th and 18th centuries, abortion was legal under common law before ‘quickening.’ … Abortion in the early stages of a pregnancy was common and generally not considered immoral or murderous.”

Similarly, Times columnist Nicholas Kristof stated in October 2020, “Abortion was legal in the United States up to the point of quickening (the fetal movements felt in the second trimester) until the 19th century.” He evidently does not understand that Americans knew a baby in the womb is human life, so until abortion became common, the general prohibition on murder seemed sufficient. Kristof and others should read the Archives of Maryland and the records of other colonies.