High on the smile index

CHISAMBA, Zambia—On a windy Sunday morning at the Village of Hope—a 230-acre orphan village located 30 miles north of Zambia’s capital, Lusaka—dozens of children and a few adults gathered for worship at the VOH community center, which was surrounded by tall grass, pathways muddy from weeks of rainfall, and other brick buildings.

Inside, 17 children led the congregation in praise songs, backed by clapping and dancing. They stood in front: boys dressed in blue shirts, and girls with ankle-length chitenges (a multipurpose African skirt) tied at their waists. One of their songs in Zambia’s Bemba language translates to “Our Lord is great and merciful.”

For many of the 83 children who live at the Village of Hope, the song rings true. The orphanage is home to children born in prisons, some who fled abusive homes, and others with extended families that couldn’t afford to care for them.

Zambia is slightly larger than Texas in area, with a population of about 16 million. The United Nations children’s agency says 12 percent of the country’s child population are orphans, meaning they’ve lost one or both parents. They are children like 15-year-old Gift Mulayamba. I spoke to her outside the three-bedroom cottage where she lives with 10 other children and a house mother. The cottages are arranged in compounds surrounded by trees and flowers. A chart on the kitchen wall shows each child’s daily chores, including cooking.

Gift was loading charcoal into a small cylindrical brazier in preparation for boiling water. It was her turn to make supper for the house: She was making nshima, a staple meal made from dried corn. Gift said her mother went to prison when she was 2 years old: Before coming to VOH, she lived with an aunt who maltreated her and at another orphanage that shut down. She had asked her father to take in both her and her younger sister after he married another wife, but he refused.

“Sometimes it gives me great pain, but not as much as before,” Gift said. She calls VOH her family and says it has been a place of healing.

THAT’S WHAT VOH executive director Benedict Schwartz and his wife Kathleen hoped for when they founded VOH in 2006 under the auspices of a Maryland-based nonprofit, All Kids Can Learn International. They were adoptive parents with experience helping their Maryland church develop an orphan home in Namibia. Benedict Schwartz’s business background gave him an entrepreneurial worldview, and they had the wisdom to work through Zambian leaders and authorities. From the beginning they partnered with Zambia’s Department of Social Welfare, which verifies the children’s cases before they enter VOH. That connection helped them establish trust with relatives and neighbors.

A decade along, the project has grown to include a school, restaurant, truck park, and other businesses designed to support the work. Last year the businesses provided about 60 percent of VOH’s revenue. The location helps: The property lies along Zambia’s Great North Road, a major trade highway between the Democratic Republic of Congo and South Africa. VOH employs 132 local people and provides part-time work for some of the children.

Schwartz said the goal of the village, beyond its wider outreach, is to give the children a Christian family experience: “In a family, you don’t age out. You may leave, but still have a place to come back to.” 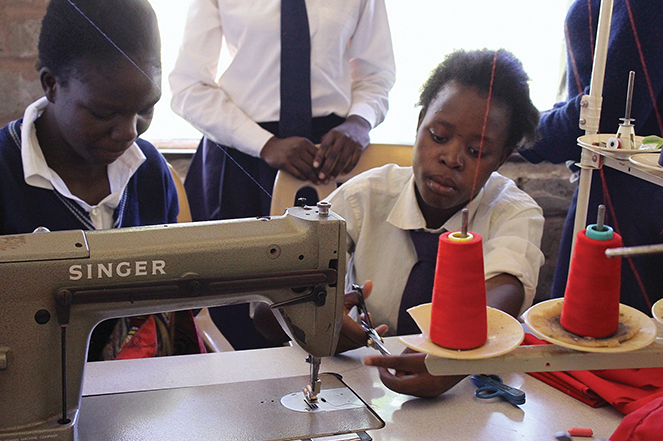 School of Hope students at work in a tailoring/sewing class. Onize Ohikere

VOH INCLUDES A WORKING FARM. The orchard surrounded by barbed wire has banana, guava, and orange trees. Maize covers about 30 acres, with some of it becoming feed for the farm’s 28 cows. The farm also includes 200 egg-laying chickens, 400 broilers, and 80 goats.

The agricultural products feed the children and supply the restaurant, which displays a sign promising “Fast Food. Quick-In-Quick-Out.” Inside, scones, samosas, and other snacks fill display cases. Behind the counter, a chalkboard lists food items and their prices. The restaurant also includes a minimart with some toiletries and other amenities. Outside, unpaved land serves as a truck stop for drivers traveling along the busy highway. One night 26 trucks parked there. The businesses generate daily average sales of $200 in a country where the average daily wage is only $2.

As needs arise, VOH has established businesses to meet them. The village produces some of its own furniture and bricks used in building the cottages. Its tailor shop manufactures school uniforms for the children. The jobs have provided needed support for people like Anna Gatawa, a 58-year-old widow who works as the senior housemother. Her husband’s death left her the sole provider for her two children. Gatawa said her job at the village helped her send her two children to college: “I was very young, but God helped me manage.”

Children also develop business acumen. Some rear their own birds and gather eggs from the hens’ pen. Schwartz said VOH teaches the children a “45:45:10” money management policy. They save 45 percent of their earnings, spend another 45 percent, and tithe the last 10 percent.

Eighteen-year-old Shaibu Chanda works part time at the restaurant’s kitchen. Chanda used to herd cows to make money for his family before he came to the village with three of his siblings. He started to save money and sends some back to his widowed mother: “Every time I go there, she’s always happy.” 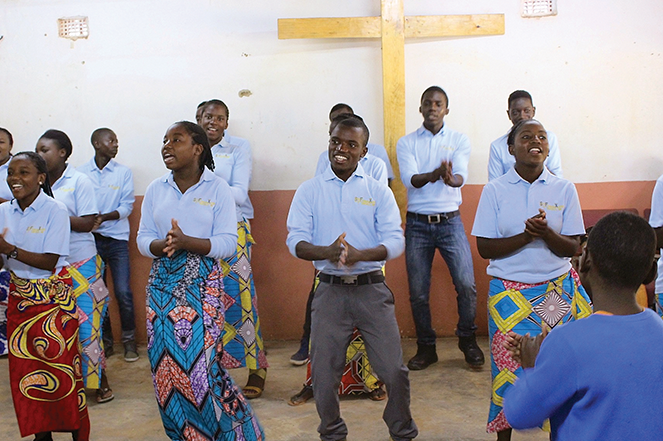 CAREER DAY fell on a rainy Friday morning. Children who were dressed as nurses, lawyers, and other professionals skipped over rain puddles to reach the School of Hope, a three-quarter-mile walk from the cottages. By 10 minutes past 8, muddy shoes lined the wall at the front of each classroom. In the classrooms, children clapped and sang praise songs as they do every morning before Bible study.

The school, which started with about 10 students in a living room at the village, now has 610 students. It celebrated its first graduating class in December. Although Zambia has declared education free through seventh grade, expenses for books and uniforms keep more than 350,000 primary-school-aged children out of school. In rural parts of the country, children often work rather than attend school. The children who do attend often face crowded classrooms, absentee teachers, and a lack of textbooks.

The School of Hope follows a modified version of the national syllabus, but it doesn’t look or feel like a typical Zambian school: “We try to create an environment where kids are free to ask questions, think, and come up with answers,” said school director Kathleen Schwartz. Classes are smaller—typically 25 students per teacher. Brightly colored posters displaying Stephen Covey’s 7 Habits of Highly Effective People hang in each classroom. Students in grades five to seven, instead of listening to lectures, enjoy hands-on gardening and first-aid training during some class periods.

Students in the government schools must achieve a 40 percent grade to pass a subject. Last year School of Hope set a “6-60” pass system that required students to earn 60 percent in six subjects to continue to the next grade. Although the school eventually reduced it to 5-50, Kathleen said the more rigorous standard caused many students to increase their study efforts.

As with the VOH and its businesses, the School of Hope looks beyond the welfare of its own students. It provides daily meals for its teaching staff and the students four days a week. The school also hosts an in-service training day each year for teachers across the country. Last June, 160 teachers from 10 schools attended, and five volunteer educators from the United States helped. They organized workshops on topics like activities for early childhood classrooms and how to use science in the classroom. VOH plans to establish a teaching college that will follow Zambia’s curriculum but include computer classes and sessions on how to bring Bible truths into the classroom. It will offer a three-year diploma.

VOH plans to start a pregnancy resource center and safe house next year. Dr. Chipepo Chibesakunda, the village’s physician, said the rising number of teenage pregnancies prompted the idea. Last year, the family of one School of Hope student forced her to move in with the boy who got her pregnant. The 10-bedroom safe house would provide shelter for pregnant children around the country who get kicked out of their homes, while the resource center would provide helpful information to the children and counter pregnancy myths.

“It would be a place where we can not only teach but also show videos of what it’s like as the baby is growing, pray for the babies before they are born, and teach them to talk to their babies,” Chibesakunda said. 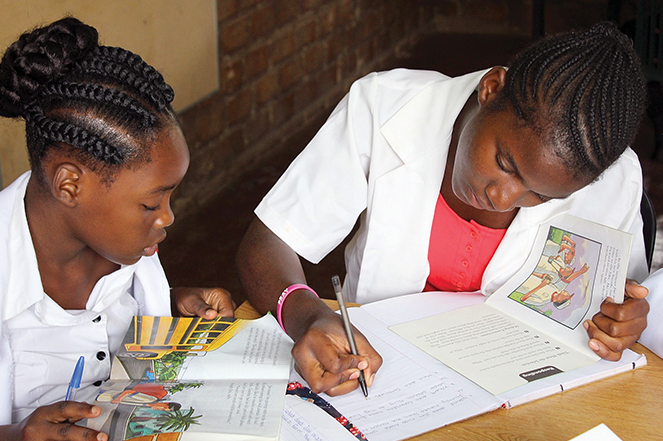 ON A THURSDAY AFTERNOON, Schwartz drove his Tundra truck through the village to round up some of the children for choir practice. The kids jumped into the back of the truck at each stop and easily joined the ongoing chatter. During the short drive, they broke into songs amid bouts of laughter: Schwartz calls that the village’s “smile index.”

Gift Mulayamba, now in the 11th grade, dreamed of her mother’s release from prison, and on Dec. 25, 2013, it happened: Gift sees it as an answered prayer. At the village, she participated in Alpha, an international video and discussion series that explores the basics of Christianity. She now sings in the choir and runs a Bible study for some of the younger children during the summer. She would like to become a doctor and a mechanic, and adopt two children: “I think if I concentrate on my education and put God first, I’ll save other people’s lives.”

A 20-year-old, Monica Nkonga, has lived in VOH since 2013. She hugged and carried several of the younger children in her arms as we walked around the village, and said, “I want to love them the way I wasn’t loved.” She was raped as a child and repeatedly told she would never become anything better than a prostitute—but she spoke of how the village showed her she is capable of much more. Now a high-school graduate, Nkonga plans to study social work and come back to the village to help other children, especially girls who’ve been assaulted.

For Schwartz, the stories of ongoing healing map the way to the village’s future, with VOH kids who have become competent adults running “the whole operation at management level. Who knows better what it’s all about?”

Listen to WORLD Radio’s profile of Village of Hope

Next in this series on the 2017 Hope Awards: Southwest Region winner Navajo Ministries