Help in the COVID-19 epicenter

Samaritan’s Purse brings its emergency hospital to an unusual spot: the middle of Manhattan

On Sunday morning, tents for a field hospital went up in Manhattan’s cold, windy, and muddy Central Park.

At the request of the state of New York and of the Mt. Sinai Hospital system, the Christian humanitarian organization Samaritan’s Purse rushed an emergency field hospital to the city that is now the epicenter of the COVID-19 outbreak.

Dr. Elliott Tenpenny, a doctor with Samaritan’s Purse who has fought Ebola in the Democratic Republic of Congo, now heads this Central Park field hospital. He stood in the mud as the wind whipped the tents going up and shook his head. “The most improbable thing,” he said about being in New York.

New York Police Department officers set a large perimeter around the new hospital site with barricades. From a distance, New Yorkers stopped to look at the mysterious white tents going up in what is normally a field filled with picnickers and sunbathers, just a few blocks north of the Guggenheim Museum.

“We’re going to be using every place we need to use to help people,” said New York Mayor Bill de Blasio about the new hospital.

About two dozen volunteers from local churches—Redeemer Presbyterian Church, Church of the City, and Emmanuel Anglican, among others—showed up in the morning to help build the hospital. One of the volunteers was Pastor David Beidel, whom I met in 2012 when his and other churches on Staten Island were helping with his neighborhood’s recovery from Superstorm Sandy.

“Our Sandy crew is back!” he said to me through an N-95 mask. “We’re still in the middle of a Hurricane Sandy right now. It’s not like, ‘Yesterday was Hurricane Sandy: Let’s get to work.’ We haven’t even hit the peak yet.”

New York has about half the cases of COVID-19 in the country. The latest numbers Monday showed 66,497 New Yorkers have confirmed cases of COVID-19, and 1,218 have died, most of those in New York City. The city has about 20,000 hospital beds and estimates that it will need 60,000 by the beginning of May. 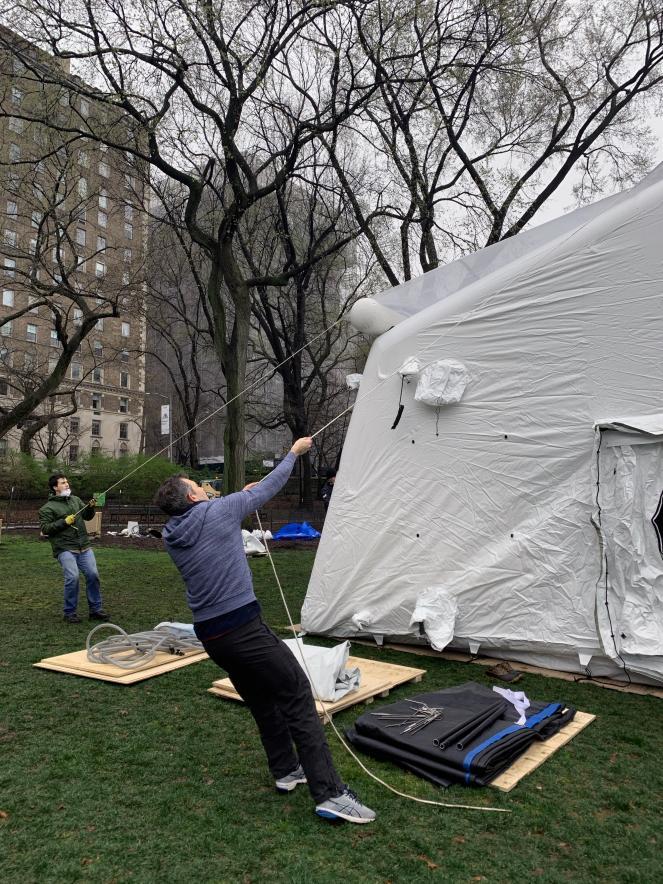 After 48 hours of nonstop construction, the Central Park hospital will be operational on Tuesday morning. It will have 68 beds, only for COVID-19 patients, whom doctors will transfer there from Mt. Sinai’s eight hospitals. Tenpenny expects the hospital to be full on the first day, as happened with a field hospital that Samaritan’s Purse built in Italy.

The Central Park hospital is small compared to the thousands of beds the Army Corps of Engineers set up in the Javits Convention Center, as well as the 1,000-bed hospital ship that just arrived in New York, the USNS Comfort. But the Javits field hospital and the hospital ship will serve patients who don’t have COVID-19, trying to offload cases from overwhelmed hospitals.

The Samaritan’s Purse hospital has about 70 medical staff. It includes an intensive care unit, male and female wards, and a sick bay for staff. There is a sleeping area for staff on call, a pharmacy, a lab with an X-ray machine, a supply tent, and a morgue. It covers about 50,000 square feet on Central Park’s East Meadow.

The large, heavy-duty tents are built to withstand the elements. The hospital will have electricity, which the local utility company Con Edison was wiring as the tents were going up. Will King, Samaritan’s Purse’s point of contact with the city, laughed about the terrible weather as they were setting up: “The mayor’s office even apologized for it.” 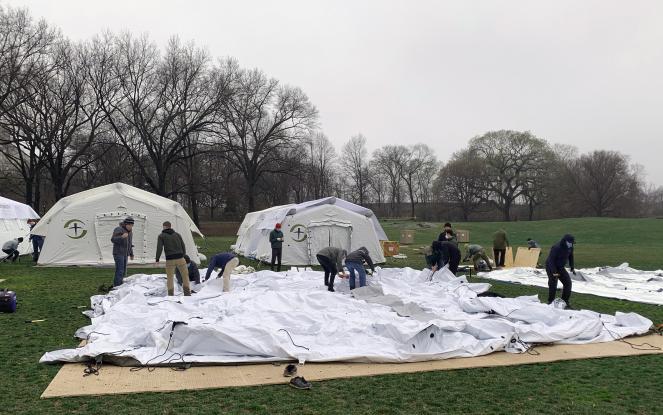 The Samaritan’s Purse field hospital will have 68 beds. Emily Belz

The Central Park hospital came about when Samaritan’s Purse offered its services to federal and state authorities. The Federal Emergency Management Agency connected the group with Mt. Sinai, and on Saturday Tenpenny and others met with Mt. Sinai administrators. Together they drove around the city looking for the best spot for a hospital, then settled on the Central Park spot across from one Mt. Sinai hospital. The city quickly came through with permits to make it happen.

“The city has fast-tracked every approval process,” said Tenpenny. Other departments pitched in: The Central Park Conservancy had staff and a tractor out moving pallets of supplies, and city workers were busy setting up barricades. One city worker hauling metal barriers had a cigar clamped between his teeth, gritting against the cold, wet wind.

“We’ve never faced anything like this,” said Beidel. “We’re all a little bit paralyzed … but we have to work together to be the hands and feet of Christ in New York City.”