This past Sunday in China, members of Chengdu’s Early Rain Covenant Church gathered inside living rooms for worship as they’ve done since the Chinese government shut down the church and arrested its leaders in December. But this week, police showed up at two homes, forcing everyone—children, the elderly, and pregnant women—into police buses and taking them away to the local station. Police detained a total of 44 people, the youngest of which was only 2 months old, according to Early Rain’s Feb. 25 update.

Police placed 11 people in administrative detention and released the rest that day or early the next morning. Inside the station, police hit a man and his wife in the face and withheld food from some of the parishioners, according to the update. Early Rain Covenant Church has faced continued persecution since Dec. 9, when police detained more than 100 church members and leaders. Today, Pastor Wang Yi and his wife Jiang Rong, the church’s four elders, and eight others remain in prison, unable to meet with their lawyers.

On the same day as the raids, police assaulted Wang’s 70-year-old mother as she withdrew money from a bank ATM. A police officer who had been tailing her tried to peek from the side as she typed in her PIN number. She asked him not to look, and in response, he insulted her and pulled her hair, according to an account by Wang’s niece.

When a bank security guard tried to stop him, the officer yelled, “I’m enforcing the law!” and the frightened guard walked away. The officer continued to kick the 70-year-old in the legs while a second officer grabbed her to prevent her from hitting back.

When Wang’s mother later reported the abuse, the director of the local police station said he would deal with the officer. Meanwhile, he prohibited her from publicizing the officer’s name or ID number. She is currently caring for Wang’s 12-year-old son, Shuya, while his parents are in prison.

Xu Miaozhuang, the wife of imprisoned elder Matthew Bingsen Su, and her four children have also faced constant harassment since her husband’s detention began. Twice police have pressured their landlords to evict them, forcing them to find a new apartment. Police told Xu that her family members were illegal residents because her husband’s doctoral degree isn’t connected to his registered residence in Chengdu and their children don’t have hukou (household registration).

Their most recent eviction was on Feb. 22, when their landlord tore up the contract they had just signed. A photo from that night shows Xu hugging and comforting two of her sons as they cry about losing their home again. The landlord had earlier promised Xu that she would not comply with the police eviction request. 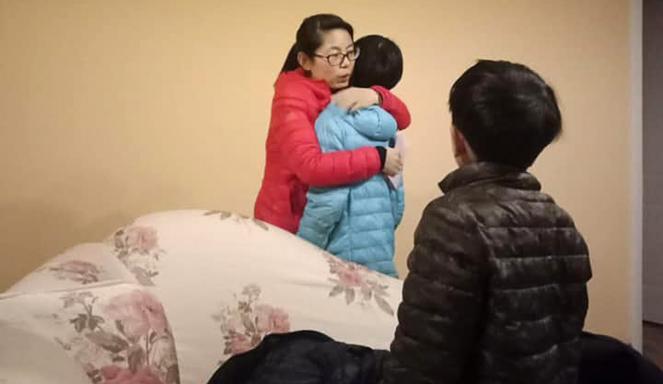 A week earlier, on Feb. 14, Xu and the wives of three other imprisoned Early Rain members met with representatives of the German Consulate in Chengdu to talk about about their situation. The next day, local police detained and interrogated each of them about what they said in the meeting, who they met, and what type of assistance the diplomats offered, according to the Texas-based China Aid.

During that interrogation, according to a church update, a national security officer said: “Too bad we can’t go back in time 40 years and put dunce hats on them and behead them.” He added that they would kill them sooner or later. The women were released the next morning.

During last December’s crackdown, police took four children away from another Early Rain church member who had fostered the siblings for more than a year. Police sent the siblings to live with relatives in a town in Sichuan province. Recently, the foster mother went to visit the children, only to find that the relatives had not kept their promise to keep the four children together, but instead have split them up to live with different families.

A Feb. 21 church update ended with a passage from the book of Revelation describing the heavenly picture of a multitude of people in white robes who have experienced great tribulation. The update read, “Even though we are struggling with the unbearable weight of harassments, surveillance, threats, and humiliation, as soon as we remember that this is a way of being imprisoned with those in prison, heavenly joy rises up within us.”

‘It’s hopeless but you persist’

Former Chinese Business View writer Jiang Xue was once one of the most influential investigative journalists in China. She quit her position as editor of the publication’s opinion page in 2014 over concerns about censorship, but kept writing profiles of people who resist. Now she can only post her articles on her WeChat page, where censors quickly delete them, or in the Hong Kong magazine The Initium—but that publication is collapsing as it runs out of money.

In a New York Review of Books interview, journalist Ian Johnson asks if she will continue to write these pieces even if they can’t get published. Her response: “Yes, I just write them anyway. I feel I have to write them. As an independent journalist, if I think it’s important, I can write; so I do. In the past, you were always being told you can’t write about this or that. Now, I can write.”

—This story has been updated to remove an incorrect name given for Wang Yi’s mother, to correct the day she was attacked, and to correct the name in the second photo caption.