When Chris Gargiulo finished his 30th year of working at a McDonald’s in this city 37 miles north of Tampa, 60 people attended a celebratory surprise party. Gargiulo “was shocked,” according to Cheryl Stark, a friend from church, but someone else might have been even more surprised: the doctor Gargiulo’s mother, Elizabeth Bridwell, consulted after Chris was born with Down syndrome (DS) in 1960.

That physician advised her to invest all her energies in Chris’ older sister, Lisa, saying Chris would “make a nice pet.” The children’s father and Elizabeth divorced in 1963, but her second husband, Ward Wedlake, vowed Chris is “going to live in our world.” They did not institutionalize Chris or treat him indulgently due to his differences. They raised him alongside Lisa and younger half-brother Scott, with similar disciplinary expectations.

“We had to educate the doctors,” says Elizabeth. As a youngster, Chris could outperform older children with special needs, since he followed instructions well. Attempts to mainstream him in public school failed, however: Only after seeing the “F” in PE on his report card did Bridwell learn Chris spent a whole semester not changing into gym clothes because he couldn’t work the combination on his locker.

Chris was in special needs educational programs until his early 20s. In 1988, a few months after Wedlake died of leukemia, Elizabeth heard a McDonald’s opening nearby was seeking job applicants. She took Chris to interview. Manager Rich Bondanza hired him on the spot.

Bondanza recalls, “He was willing to do anything. … He was so happy just to be there, and that makes all the difference in the world.” Gargiulo has worked two shifts weekly ever since. Notes Bondanza, who left for a different business opportunity, “Making that decision was awesome, not for me, but for the people who’ve gone there the last 30 years.” 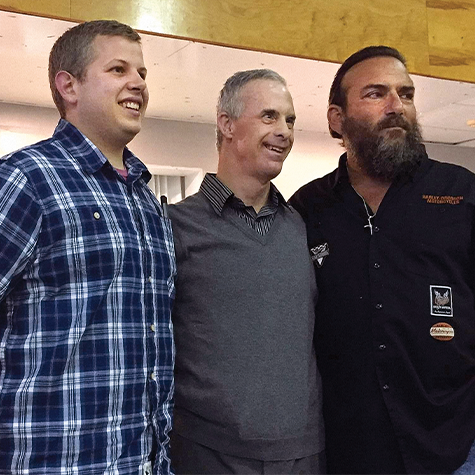 Chris at his surprise party with his current McDonald’s manager, Andrew Chaya (left), and Rich Bondanza (right), the manager who hired Chris 30 years ago. Elizabeth Bridwell

On a recent sunny Saturday, Elizabeth dropped Chris off at 8 a.m. for breakfast before his shift. An upbeat oldies soundtrack accompanied a steady stream of patrons at both ends of the age spectrum, veteran’s caps and canes mingling with Crocs and swim trunks. Clad in a black hooded McDonald’s sweatshirt, black pants, and black New Balance shoes, Gargiulo peeled bills out of his wallet and headed for the counter to order. After eating, he chatted with co-workers and an elderly regular, checking his watch every few minutes.

At 9:00 sharp, Gargiulo disappeared into the kitchen. He emerged with gloves on to empty trashbins behind the counter, weaving seamlessly among his bustling co-workers. Only his salt-and-pepper hair and the shiny “25-year employee” pin on his visor suggested he is decades older than most of them.

He entered the dining area with disinfectant spray and a large roll of paper towels, alternating between wiping down tables and retrieving trays from trash stations, resetting them with fresh placemats. The picture of industry, he constantly looked out for ways to be useful.

Around 11:30, Gargiulo brought in mail from the store’s curbside box. Afterward, he took lunch—a grilled chicken breast and flour tortilla, seasoned with mustard packets. Sometimes he has a burger, but he prefers the ones at a rival chain. Does his employer know? Chris smiled and put a finger to his lips.

Gargiulo seeds conversations liberally with “happy” and “love”: “I love my mom.” “I am happy to work here 25 years.” “I love kids.” “I am happy.” Now and then, he spells out words, whether discussing his role passing the offering plate at church (“I do m-o-n-e-y”) or his favorite soap opera, The “Y-o-u-n-g” and the Restless (“I am hooked on it!”). The quirk validates notions of being “differently abled”—we speak before we spell, yet spelling seems to facilitate his speech.

The only topic that darkens his mood is the possibility of losing his mom: “Oh, my eyes!” he cries, holding back tears. “Hope not,” he says earnestly, “hope not.” Both Lisa and Scott have homes with space for Chris to move into if needed.

Meanwhile Elizabeth, a vigorous 84, is vigilant for signs of decline in Chris’ health. Average life expectancy for individuals with DS is around 60 years, but Chris had none of the heart defects that sometimes accompany DS. At 5-foot-4 and 140 pounds, he maintains a healthy weight.

Ironically, as medical advances extend life expectancies for those with DS, prenatal testing has decreased their chances of making it out of the womb. Figures vary, but studies indicate most parents abort a baby who tests show is likely to have DS.

For Elizabeth Bridwell, though, Chris “is the glue that keeps me together.”

There was a young man at my church with DS and every once in a while the music director would let him lead the singing.  I never could sing when he was leading (with his arms keeping the beat) because I kept tearing up!  He was such a delight to watch and my heart ached for all of the ones who had been aborted because of a test their mom's took prior to birth.

Beautiful story Laura. It's so sad that people don't understand how much joy a person with DS can bring into their family. My sister-in-law, Jonell, had DS. She brought joy to our family and we often reminsce about endearing things she would do. We look forward to seeing her in heaven and being able to hear her without the speech impediment. She will have much to tell.