It’s easy for activists to dream of abolishing the police, but urban realities make such plans a nightmare for some

On a warm February morning, Julian Canales, a Los Angeles Police Department officer, stood at an alley in East Hollywood, watching a homeless man camped behind somebody’s back gate. The man was in his 60s and had an undiagnosed mental illness. He had a frizzy salt-and-pepper beard, a lime-green comb sticking out of his large Afro, and an astringent body odor. His dirt-caked hands trembled from Parkinson’s disease. His legs were raw, peeling, and oozing from some kind of infection. For the past five years the man had been refusing any kind of services from a homeless outreach team.

That day, the outreach team finally decided to place the man in psychiatric and medical care involuntarily. In the past several months, the man had visibly lost weight and was no longer walking. He left the food people gave him untouched, drawing flies and rats. He urinated and defecated on the same spot he laid his head. Left alone, the man would soon surely die. But the workers weren’t sure how he would react to attempts to force him into an ambulance—so they called LAPD’s Canales for backup. Though dressed in a black polo shirt and khaki pants, underneath his civilian attire Canales was all geared up: He had his pepper spray, handcuffs, and a gun, just in case.

Canales is the senior lead officer of LAPD’s Mental Evaluation Unit (MEU), a law enforcement–mental health co-response operation. LAPD set up the MEU four decades ago with the goal of connecting persons with mental illness to services instead of arresting them. Over the past few decades, police departments across the nation have been training their officers on how to handle people with mental illness and setting up their own mental health units. Yet in 2015 and 2016, 1 out of 4 police shootings still involved someone with a mental illness.

As Canales observed the frail old homeless man, he sighed. The man clearly wasn’t a threat. They had been waiting close to an hour for the ambulance that would eventually take the man away. Canales is conflicted and frustrated: Who knows if this poor man will even get the long-term care he needs, when thousands more like him roam the streets and very few psychiatric beds and services are available? As a law enforcer, should he even be there overseeing this whole operation that had nothing to do with crime? “In an ideal world,” he later said, “I should not have the job I have.”

Canales could not have imagined that three months later people across the nation would be wondering the same thing on a grander scale: Is there a better way to do policing? Some not only demand an end to police brutality, but urge an end to policing as we know it. Meanwhile, many in high-crime areas say police reform is necessary, but reducing the number of police officers would be a disaster for their communities.

So what does “defund the police” mean? Some on the far left call for a socialist society that they imagine would not need any police, since—in the words of community organizer Mariame Kaba—it would be “built on cooperation instead of individualism, on mutual aid instead of self-preservation.” Others want police to concentrate on violent crime rather than destructive but often nonviolent problems such as homelessness, mental illness, or drug addiction.

In Los Angeles, Mayor Eric Garcetti announced the city would look into moving $100-150 million from the $2 billion LAPD budget and redirecting that to “marginalized communities.” The LA City Council is talking about replacing LAPD officers with unarmed, non–law enforcement agencies to respond to nonviolent calls, but otherwise has not offered a detailed reallocation strategy. (A council member declined an interview request from WORLD.) 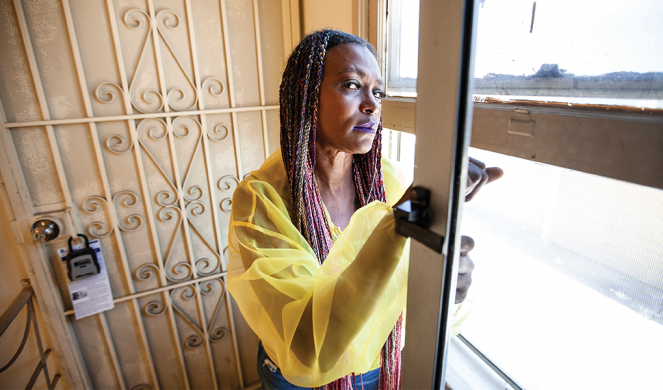 But Detroit Hughes, 57, a formerly homeless black woman who now lives in a predominantly black and low-income neighborhood in South LA, told me if “defunding the police” means less policing in her area, “I’d move back to Skid Row. I’d feel safer in Skid Row than here.” She said she hears gunshots in her neighborhood every week. Just a few weeks ago, someone beat up a 13-year-old boy by the car wash and stole his tennis shoes: “No cop did that.”

Hughes doesn’t deny the real problems between the black community and the police. She said that in 2012 her 19-year-old brother was visiting his girlfriend in Indiana when the girlfriend’s grandfather, a retired sheriff, shot and killed him in his front yard. She said that retired sheriff faced no legal repercussions. Her brother had been three days away from joining the military when he died, leaving behind a 5-month-old daughter.

“We’re tired, angry, and black,” Hughes said: “I get it, I get it. I’m upset too! I identify with George Floyd more than you can ever know. I think black people are saying, ‘We’ve had enough with being unjustifiably accused and killed.’ But defunding the police is not the solution. There are issues and behaviors among us that we need to address ourselves.”

“I think black people are saying, ‘We’ve had enough with being unjustifiably accused and killed.’ But defunding the police is not the solution.”

Hughes raises a point that many advocates aren’t addressing: Blacks still make up a high percentage of both perpetrators and victims of homicide compared with other races. Research shows that more police officers on the ground may deter crime, but the paradox in high-crime black communities is that too often the police overpolice communities on petty offenses such as traffic tickets or marijuana possession, yet underpolice them when it comes to serious, violent crimes.

At its core, the “defund the police” movement stems from a deeply rooted distrust not just of individual police officers but of the legal system. Many black citizens view the police not as guardians but oppressors, and the statistics show why: Police are more likely to stop and search black than white drivers. Although black and white Americans use and sell drugs at similar rates, blacks are 2.7 times more likely to be arrested for drug-related offenses and 6.5 times more likely to be incarcerated for drug-related charges.

A lot of history contributes to distrust. After emancipation, local police were the ones enforcing sharecropping systems, voter suppression, convict leasing, and prison farms. Many terrorized civil rights demonstrators with batons, whips, and dogs. Today, many African Americans see police as part of an unjust system that disproportionately arrests, imprisons, and kills them. 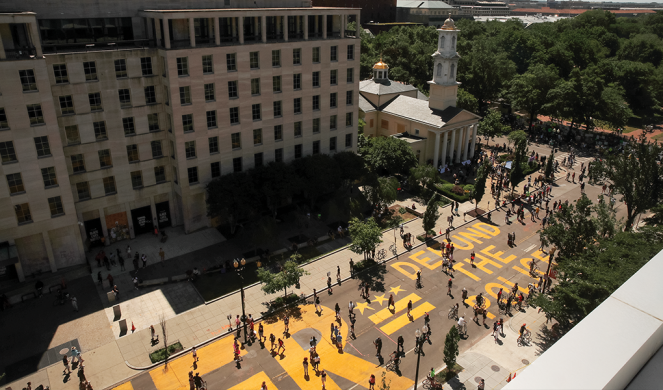 Demonstrators gather June 7 near a protest message painted on 16th Street near the White House in Washington. Maya Alleruzzo/AP

SO FAR, MINNEAPOLIS has taken the most radical approach: Nine out of 13 members of the Minneapolis City Council made a pledge to dismantle the Minneapolis Police Department, the state’s largest police force, and create “a new, transformative model for cultivating safety in Minneapolis.” Council members talk of cutting $200 million from the $1.3 billion city budget, shifting those funds to mental health services and other initiatives, and letting community members respond to public safety issues—although what that means isn’t clear.

Other major cities are also considering major cuts to their police force. Mayor Bill de Blasio in New York City has pledged to cut funding to the New York City Police Department, the country’s largest and most expensive police force at a nearly $6 billion budget. The New York City Council is proposing to cut $1 billion from NYPD, but local activists say that’s not enough and the mayor says that’s too much.

But lack of clarity breeds confusion and trepidation. It’s easy for activists to march the streets demanding change and abolishment. It’s not so easy for elected officials to devise a well-formed alternative system with all its complex parts. Nor is it comforting for the people who live in high-crime areas to imagine what life would be like with fewer police.

If the answer is not fewer police but better policing, anti-police rhetoric isn’t helping boost morale in police departments. All the police officers I talked with expressed horror and outrage at the George Floyd case, but they say that’s a rare exception, not the norm.

“Every officer agrees that he was so wrong,” one officer in Texas told me: “There’s nothing good cops hate more than bad cops.” Still, many acknowledge that racial bias does exist—one black officer told me the police racially profiled him when he was younger, and even when he’s a cop driving home from work: “I know it exists. I know it’s real. I just cannot say it’s every police officer.”

Most officers acknowledge the need for reform, such as better public transparency, more accountability, and preventing unions from shielding bad cops. Some admit it’s not just policies that need reforming but the police culture itself, which can tilt toward an “us-versus-the-world” blue fraternity that dehumanizes the very people they serve. But officers say they fear the rush to defund the police may lead to tragic unintended consequences, particularly if it means fewer cops patrolling the streets.

“I shudder to think of all the people who are going to be hurt, raped, stabbed, killed, and all the open-air drug markets that will pop up,” one LA officer told me. (WORLD granted him anonymity to protect his job.) “There’s one variable those activists are forgetting, and that’s the will of the human being,” he said.

This officer has been patrolling an area in LA that has one of the highest concentrations of violent crime, homelessness, mental illness, and addiction for 25 years. The majority of people there are black. So is this officer. Over the years, he developed relationships with the community he serves. I once walked his beat with him and watched people rush over to hug and greet him. He remembers their names, listens to their concerns, and often buys groceries for them out of his own pocket.

Everybody in the area knows if they need housing, he’s the guy who can make it happen. Yet in 10 years, only 150 of the 2,000 homeless people there asked him for help. Some did ask, but left the housing when they realized they couldn’t use drugs there anymore. The city had already taxed its residents $1.2 billion to build more permanent housing for the homeless in 2016, yet the recent homeless count showed a 14.2 percent jump in homelessness within a year.

Would divesting more money from the police to homelessness actually help these people? “It’s a noble concept,” said the officer: “I agree with it in theory. But in application, it’s just not reality. It’s too idealistic. The major variable comes down to their human will, their desire to change.”

That variable of “human will” also applies to the police force. The police are made up of individual human beings with a will that no government policies or societal pressures can control. The officer told me, “I can tell you, we will have another ‘human moment.’ We can put policy after policy in place, but sometimes, it’s the flawed human beings who work within the system. Someone will always disappoint us, whether you’re a cop or not. And it will be that way until the end of time.”

Editor’s Note: WORLD has updated this story to correct the age of Detroit Hughes.