Jesse Slaugh sees his time behind bars in Indiana as one of the best events of his 42-year-old life.

He wound up free of opioid abuse, with a new outlook on life and a job building handcrafted furniture.

These days he works at a small business, Purposeful Design, which makes custom furniture and offers work for formerly homeless men who have been through rehab at an Indianapolis rescue mission. Purposeful Design assumes that Christian faith and work opportunity are as vital for the opioid crisis as a top-notch medical response.

Slaugh’s problems started when he was growing up in Utah, where he rebelled against his parents through drug and alcohol abuse. He started with alcoholic beverages at a young age and graduated to marijuana, then to stronger opioids.

“I wanted to do everything my parents told me not to do,” he recalls. “I don’t have a reason for that except for hanging out with the wrong crowd and experimenting.” 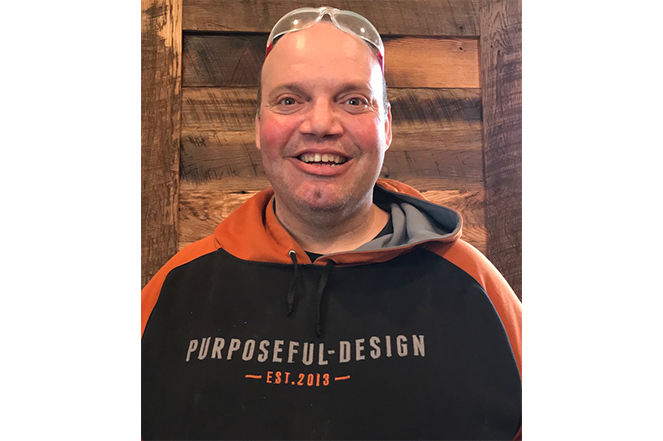 Even with his drug habits, Slaugh managed to hold jobs in restaurants and in hydroblasting until he failed a drug test. He tried a rehab center in Northern California but relapsed.

He tried to start over in a move east to Indianapolis for a woman he met on the internet. That didn’t work out well. Following a domestic dispute, he wound up with a short prison sentence at a low-security prison in Indiana. He felt he was sent there unjustly, but he learned Romans 8:28, which teaches Christians that God controls events and arranges them for their long-term benefit.

“Going to prison was one of the best things that ever happened to me in my life,” Slaugh said. “I needed to quit everything. I was running out of options.”

Once out of prison on probation, he had no place to go except the Wheeler Mission homeless shelter in downtown Indianapolis. Prison helped him realize his need to get serious about the Christian faith commitment he had made a few years earlier. At the mission, he joined the STEPS program, rising at 6 a.m. and learning disciplines such as Bible study and prayer.

Through STEPS—Steps Toward Economic and Personal Stability—he grew in his understanding of basic work skills such as coming in on time and getting along with co-workers. He heard about a year-old ministry called Purposeful Design, where men started the workday with a time of prayer. It turned out to be a good fit for Slaugh.

He is skeptical of a medical cure for the opioid epidemic: “I hope people learn that they don’t need opioids, but they want them. You’re not sick. You just want it. The cure for addiction is Jesus.”

Slaugh’s story may not be the cure for everyone addicted to opioids, but it shows how faith can help a man or woman steer out of addiction to a productive life. Many of the faith-based approaches to the problem avoid government funding and often rely on former addicts to provide the hard-nosed counseling sometimes needed for recovery. 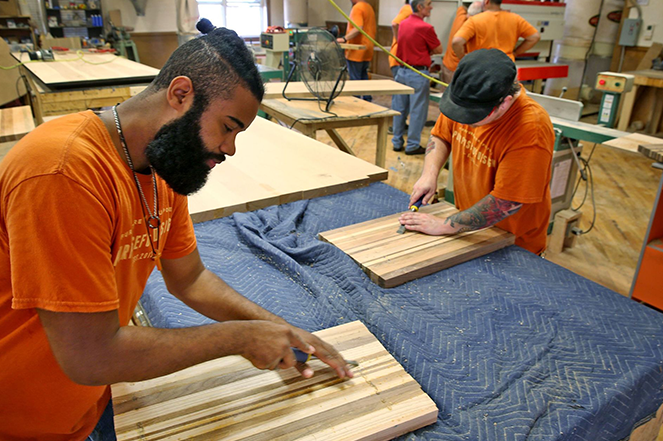 Purposeful Design grew out of Wheeler Mission, where board member and businessman David Palmer spent several years doing Bible studies with mission residents. He rejoiced as they grew in Christian faith, developing good habits to replace bad ones. Sometimes a breakthrough came when a man saw his addiction to alcohol or drugs was a crutch, or even an idol that needed to be replaced with worship of the true God. One of the biggest challenges was helping them find jobs. Sometimes an arrest record closed a door to employment. Or disciplined work habits were missing after years of addiction.

Palmer launched Purposeful Design in 2013, starting with a few men to fill custom furniture orders. Retired firefighter Dan Mayes, who had several years of woodworking experience, joined as a supervisor. “Men were designed to work,” Mayes says. “One of the most spiritual things God creates man to do is to serve others through work.”

Sales jumped from $36,000 in 2014 to almost $1 million last year. At the bottom line the company is close to breaking even, with 12 employees. About half the revenue goes to men’s salaries, and the rest to administration, materials, supplies, and delivery of orders. Large Indianapolis companies, including Salesforce and Lilly, have bought products from Purposeful Design, which is legally a limited liability business under the ownership of the nonprofit Sagamore Institute in Indianapolis.

Purposeful Design is expanding out of a small, old church building to a larger warehouse, adding a program to train more men in woodworking skills along with the core business of making custom furniture. The plan is to have a more permanent workforce for furniture-making. Then, in the company’s “School of Woodworking and Discipleship,” skills training could become available to 50 to 100 men who can go on to other jobs.

Since Purposeful Design almost breaks even, Palmer is pleased to keep an eye on another important bottom line—men free of opioid abuse, growing in faith, working, and sometimes rebuilding marriages and families.

Russ is a columnist for The Indianapolis Star, the director of the Pulliam Fellowship, and a member of the WORLD News Group board of directors.