Guide for the blind

Technology developers often don’t anticipate the creative ways people will use their inventions. Microsoft developed its HoloLens headset to combine digital and real-world images—a technology called “augmented reality” (AR)—but researchers at the California Institute of Technology have developed an app for HoloLens that turns it into a device for helping people who are blind navigate buildings.

In newly published research, the Caltech scientists used HoloLens’ real-time image and video capture capabilities to create a 3D map of a path through a campus building, according to MIT Technology Review. The app sends auditory commands to the wearer such as, “Railings on both sides,” “Up stairs,” or “Right turn ahead.” The female voice—repeating the words “follow me” and designed to sound as if it’s coming from a few feet in front of the wearer—directed seven test subjects from the main lobby, up a flight of stairs, and around corners to a room on the second floor.

Markus Meister, a Caltech professor and a co-author of the study, acknowledged that for now, routes must be scanned in advance and there isn’t a way for the system to track other people who might be in the wearer’s path. But he believes the research could lead to devices that help the visually impaired navigate public spaces such as hotels or shopping malls.

Lego is known for giving builders of all ages a creative outlet for constructing almost any kind of object with simple plastic bricks. Soon, Lego fans will be able to bring their constructions to life with augmented reality.

Using Apple’s updated ARKit 2, Lego has developed an app that lets builders augment their physical Lego kits with virtual buildings, plants, vehicles, and people, reported Digital Trends. During a demonstration at a recent Apple developer conference, Martin Sanders, Lego’s director of innovation, pointed an iPad camera at a completed Lego building and created an entire digital town around it on the iPad’s screen. 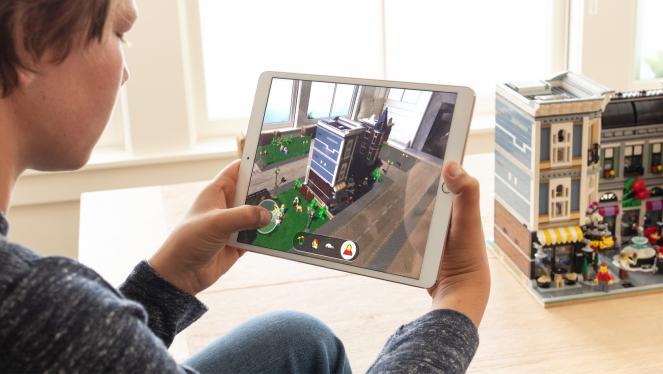 The software allows up to four players to interact with their digitally augmented creation. During his iPad demo, Sanders used a firetruck to extinguish a building fire and rescue several virtual people from the building’s rooftop. If one user makes a change, it’s instantly visible to others engaging in the project on their devices.

“When we combine physical and digital together like this, it really opens up those creative play possibilities,” Sanders told conference attendees.

The latest weather satellite from the National Oceanic and Atmospheric Administration (NOAA) delivered beautiful images of Earth’s Western Hemisphere last month after reaching its orbit approximately 22,300 miles above the equator.

Last year, a sister satellite, GOES-16, detected developing wildfires in northern Texas before local first responders knew about them, according to ExtremeTech. NOAA then alerted local fire departments and other civil authorities. The first GOES satellite was launched in 1975.