Argentina was once one of the richest countries in the world, but an embrace of ever-growing government made it poor

Americans seeking a basic understanding of Argentina’s troubled past and probable future should meld two movies many have seen: Evita (1996) and Groundhog Day (1993).

Evita grew out of a long-running Broadway musical focused on the short, sweet, and sour life of Eva Perón (1919-1952), who ascended from poverty to fame as the wife of populist President Juan Perón during the last six years of her life, then died of cancer. Argentina’s government allowed the movie’s star, Madonna, to replicate Eva’s most famous speech from the balcony of the Casa Rosada, the presidential mansion informally known as “the pink house.”

The distinctive color dates from the 19th century, when—some say—it brought together the two bitterly opposed political parties at that time, known as the reds and the whites. Another explanation is more representative of Argentina’s beefy tradition and allergic reactions to cross-class harmony: Painters mixed white paint with cow’s blood to reduce damage from humidity.

Either way, the security fence that now surrounds the Casa Rosada gives it a different look than was common from 1945 to 1952, when Juan and Eva would step onto the balcony and orate to thousands—or early in 1996, when Madonna used Eva’s words in singing to 2,000 extras, “Don’t cry for me Argentina. The truth is I never left you.”

That’s where the second movie, Groundhog Day, starring Bill Murray, kicks in. Murray’s selfish character is stuck in a time loop in a town he hates: No matter what happens on Feb. 2, he awakens the next morning in the same bed-and-breakfast bed with the clock radio blaring Sonny & Cher’s “I Got You Babe”—and it’s still Feb. 2. Argentina regularly displays not the fast-motion disaster of Venezuela, but a decade-after-decade replay of the destructive cycle that leaves millions suffering. 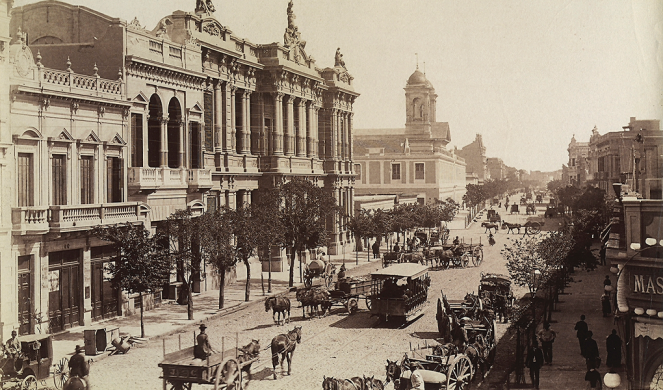 In Groundhog Day, Murray’s character eventually learns to live—and enjoy life more—by serving others. That’s what happens in an economy that works well: As Adam Smith wrote, the baker serves others by selling them bread. He then receives money that helps him feed, clothe, and educate his own children. Economies break down when the powerful grab bread without paying, and others stop baking or never learn to bake.

Argentina, blessed by a good climate, productive farmland and grassland, vast mineral resources including petroleum, a long coastline, and humans able to make use of those gifts, was one of the five or 10 wealthiest countries in the world at the end of the 19th century. A recent study by Maddison Historical Statistics even suggests that in 1895 and 1896 Argentina had the world’s highest gross domestic product per capita.

Buenos Aires in those years was “the Chicago of South America,” with industry adjacent to rich farmland and immigrants filling factory jobs. Argentina continued to progress for a while: Economist Vito Tanzi says, “In 1913 its per capita income was higher than that of France, twice that of Italy, and almost five times that of Japan.” But Tanzi adds, Argentina for a century now has become like the child “with good genes who, after an initial growth spurt, failed to grow to his potential.”

Why not? Young Americans can escape poverty if they graduate from high school, develop character traits and gain skills that make them valuable to employers, and get and hold a job. In a parallel way, countries may have three rules to avoid falling into poverty: Don’t make slicing up pies more important than baking more. Don’t make politics more important than enterprise. Don’t borrow more than you can pay back.

Buenos Aires was the “Chicago of South America,” with industry adjacent to rich farmland and immigrants ­filling factory jobs.

As Argentina has repeatedly broken those latter three rules, stagnation has been the norm. Some historians suggest that Argentina’s wealthy became like some antebellum Southern plantation owners who thought hard work was for the poor and commerce an unworthy calling. Many agree that the tendency of left and right to use force—small-scale revolutions in 1890, 1893, and 1905, coups d’état in 1930, 1943, 1955, 1962, 1966, and 1976—created an instability that became chronic.

Col. Juan Perón became president in 1946 as a synthesizer of revolt and military precision. In the granite base of the Ministry of Economics building on Plaza de Mayo, the big square adjacent to the Casa Rosada, you can still see bullet holes from the 1955 coup that attempted to overthrow him. Navy flyers dropped bombs to kill their president, but they hit a school bus and numerous innocent bystanders, killing 308 people in all.

Perón was not one of them, but a coup later that year sent him into exile, from which he returned twice to become president again. The long-term result economically: Groundhog Day. During the first decade of Perón rule the government share of the gross domestic product rose to about 30 percent, and businesses were forced to “contribute” everything from canned beef to sewing machines to politically connected workers and descamisados—shirtless ones.

Perón and his followers nationalized companies and established an export monopoly, the Argentine Institute for Promotion of Exchange, that forced producers to sell their commodities to the government for low prices. The government temporarily had lots of pesos to distribute for worker housing, pensions, vacations, and a variety of social programs. When the money streams dried up, it was hard politically to cut back. That’s when governments repeatedly borrowed and sometimes defaulted.

Perón’s third time as president ended when he died in 1974—but the government’s currency printing presses were speeding up. Inflation hit triple digits in 1975 and set the record of 5,000 percent in 1989. Hyperinflation particularly harmed retirees. Overall, per capita income declined by 25 percent from 1975 to 1990.

Economist Tanzi, who visited Argentina often as a senior staff member of the International Monetary Fund, recalls, “People shopping at supermarkets would at times experience price increases of as much as 20 percent from the time they entered a cashier’s line to the time they had to pay for their purchases. Loudspeakers would announce the increases in prices that would become effective at a specific moment.”

In 1992, a new government emphasized some frugality, privatization, and deregulation. Argentina’s economy grew for five years at the fastest rate in Latin America and the inflation rate fell to only 4 percent per year. But unemployment grew as the new owners of privatized government enterprises often cut the workforce by 40 percent.

A neo-Perón movement eventually led to the Cristina Kirchner presidency from 2007 to 2015 and a new expansion of governmental control. At the end of her two terms government expenditures exceeded 40 percent of GDP and the value of a peso had fallen from $1 in 2001 to about 8 cents in 2015. Now it’s about 2 cents, and Kirchner, constitutionally forbidden to serve more than two terms as president, is vice president.

Is she the new Eva Perón? Kirchner doesn’t have the charisma of her predecessor, whose funeral in the streets of Buenos Aires in 1952 attracted 3 million Argentines. As officials moved the body to lie in state at the Ministry of Labor, those rushing to be close to the corpse crushed to death eight people. City hospitals treated 2,000 others for injuries.

In December I visited Eva Perón’s tomb in the Recoleta Cemetery, home of the most expensive real estate in Buenos Aires. Three bouquets of flowers lay at the doorstep. Journalists have reported tight security established by officials worried about tomb robbers: A trapdoor in the tomb’s marble floor leads to a compartment containing two coffins, and under them is a second trapdoor that opens to the compartment containing the corpse.

No flowers or fans were at the tomb of Gen. José de San Martín, known as the liberator of Argentina, Chile, and Peru from Spanish rule two centuries ago. It’s inside the Catedral Metropolitana, a massive Roman Catholic church near the Casa Rosada: Two stolid soldiers guard the tomb, standing at attention almost unblinkingly, like Buckingham Palace guards in London. 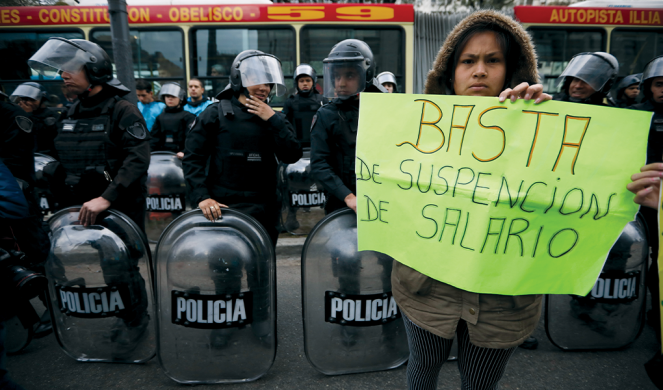 A demonstrator with a sign that reads “Stop the salary suspension” during a protest in Buenos Aires on Sept. 11, 2019 Natacha Pisarenko/AP

In the cathedral across from the tomb is what became in 1997 the world’s first Holocaust memorial inside a Roman Catholic cathedral, with fragments of Hebrew prayer books and songbooks preserved behind glass. (It seems a penance of sorts, given the way Argentina in 1945 became a haven for escaped German Nazis.) Near that memorial is another for Ukraine’s Holodomor (killing by starvation), where 4 million died in 1932-1933 in a Communism-caused famine.

Argentina has been home to neither Holocaust nor Holodomor, but had its own, smaller horror known as “the dirty war,” in which the 1976-1983 military dictatorship “disappeared” at least 9,000 radicals. On some days Las Madres de la Plaza de Mayo, mothers of those who disappeared, still make their presence felt outside the Catedral: They wear white head scarves.

But a more common demonstration took up that space on one December day: Some 500 protesters, including government employees from the Ministerio de Modernización (“We connect the Argentines and put the State at the service of the people”), milled around at noon. Some wore the classic “Pax, Pan, y Trabano” (peace, bread, and work) T-shirts and fluttered a banner from the Asociación Trabajadores del Estodo (Association of Government Workers).

Inflation not only of money but words is increasing once again: The propaganda known as Relato K—glorifying the government, portraying economic difficulties as the result of capitalist conspiracy, viewing economics as a zero-sum game where any wealth must originate in exploitation—is becoming common.

With many great people, rich agricultural land, large deposits of lithium (used in computers and cell phones), and the biggest shale deposit in Latin America, Argentina’s finances should be looking up. But groundhog economists on the other side of the equator are seeing shadows, and many expect more than six weeks of winter in 2020 and beyond.

—see the interview with Vito Tanzi in this issue

1895–96: Argentina has the highest gross domestic product per capita in the world, according to a recent report.

1946: Col. Juan Perón becomes president after a coup, introducing Perónism into the political landscape. Another coup ousts him from office in 1955, but voters reelect him in 1973. 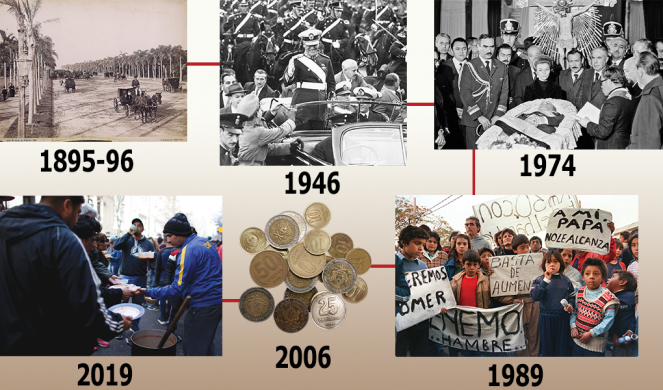 2019: Argentina’s unemployment rate increases to 32 percent (from 26 percent the previous year), mostly as a result of a 45 percent inflation rate.