Co-winner in our Understanding the World category is After ISIS by veteran journalist Seth Frantzman. He chronicles contorted alliances in the wake of ISIS and shows how to understand conflict in Syria, Iraq, and even Africa as part of the three-way battle of Turkey, Iran, and Saudi Arabia—with a proactive Russia and a retreating America hovering over the scene.

Frantzman takes readers on a firsthand tour of the terror-strewn battlefields, providing able analysis while also grappling with unspeakable human suffering. “Here in the killing fields of Sinjar,” he writes from Iraq, “the bones of those killed in 2014 sit on the surface. Human hair pokes through grass that has grown on the bodies.” I asked Frantzman some personal and professional questions.

How did growing up in Maine without electricity prepare you for covering the wars of the Middle East? It helped me view the world through an unconventional lens. That leads to asking some skeptical questions and not accepting mainstream views automatically. In the field, I could always look back at a young rural outdoors life where my parents taught self-sufficiency. Lacking some basic essentials felt familiar.

Now you live in Jerusalem, an American in the heart of a region hostile to America. This is an exciting place to live, and it’s often at the heart of world affairs. As a journalist there are few places that have as much breaking news. Also, what happens here matters to the world. The forces that caused 9/11, ISIS, or the Iran tensions with the West all converge in the Middle East.

Did any particular event move you toward writing about Islamic terrorism? In June 2014 I was sitting at a coffee shop in Beit Hanina in East Jerusalem with friends who began watching a video on Facebook showing the murder of Shiites at Camp Speicher, a massacre we now know claimed the lives of around 1,500 people. I thought it couldn’t be real. The images of people being murdered in droves looked like something out of the Holocaust, not something that could happen today. I decided I had to focus on the crimes of ISIS, and help tell the stories of those suffering and fighting this group.

You write that the conflict with ISIS “formed a bookend to the optimism that emerged from the Cold War.” How did we come out of that 20th-century madness only to land back in the seventh century? The Cold War was a struggle between a more free and democratic world and totalitarianism. The United States allied itself with unsavory regimes to topple Soviet Communism. In 1979 the Islamic Revolution in Iran claimed to present a third way, one that meshed with the so-called Non-Aligned Movement. Elites in the West generally believed religion was a thing of the past. Few understood that this would become a global struggle, both within Islamic societies and exported beyond those borders. 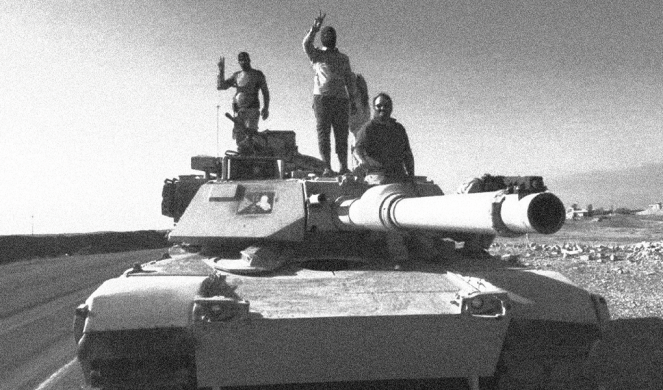 Why ISIS? That 50,000 people from all over the world joined ISIS, some of them converts and many of them raised in relatively moderate families, shows that the world is searching for a new extremism akin to Nazism. This is probably inevitable as the values that underpin Western societies decline. People feel rootless and don’t see answers to their dilemmas, such as rising inequalities or insular governing classes that appear out of touch with average people.

You start and end the book with a focus on Turkey—what’s its role in a post-ISIS world? Turkey is one of the Middle East’s most important countries, and under Recep Tayyip Erdogan it has been fundamentally transformed. Turkey might have chosen a different path, including integration into the European Union and becoming a more progressive society, a bridge between the Islamic world and the West. Instead it has become more extreme and nationalist, more militarist and conspiracy-ridden, seeking to expel enemies and purge all critics from society.

Although some U.S. policymakers think Turkey could be an ally against Iran, they don’t understand that Turkey works closely with Iran. In Syria, Turkey feigns being a U.S. ally while working to undermine the U.S. role—empowering extremist elements among the Syrian rebels.

Is there any way out of war in Syria? The Syrian conflict was largely finished in March of 2019 with the U.S. defeat of the last major ISIS remnants in Syria. But the U.S.-led coalition never had a long-term plan for eastern Syria or to handle 10,000 ISIS detainees. The United States and its allies have not done enough to help victims of ISIS, leaving open wounds in the region.

The U.S. decision to leave parts of Syria on Oct. 6 led to a predictable Turkish invasion, the deaths of hundreds, and displacement of 300,000 people. This is not a good legacy for U.S. involvement in Syria. Washington should have found a way to display strength and work with Russia, Iran, and Turkey to stop the need for a new round of fighting.

You write sympathetically about the region’s Christians. Do Christians have a sustainable presence in the Middle East, anywhere? As recently as 120 years ago Christians had major communities throughout the Middle East. Yet the period from 1914 to 2014 has been an unmitigated, genocidal disaster. From the massacre of Armenians in 1915, Assyrians in the 1930s, or deaths in the Lebanese Civil War, and abuses of Copts in Egypt, Christians have faced one attack after another. Like Jewish minorities historically, Christians have survived under the generosity of various authoritarian regimes or monarchies that agree to “protect” them. But protection is not tolerance.

What now? Most Christians have fled to the Kurdish region of Iraq now. In Lebanon, Jordan, Israel, and Egypt, the future of Christians appears more secure but still some of their communities feel under siege. It is a massive failure of Western governments that leaders only pay lip service to the rights of Christians in the region. These are often indigenous communities that have been in the same place for thousands of years, yet find themselves unable to choose their destiny, awaiting the next iteration of ISIS or whatever hateful extremism will emerge next.

After reporting on some of the worst violence of our times, do you sleep at night? And do you have any bit of hope to share at the end of it all? The trauma of reporting some of the tragedies I saw, such as mass graves of Yazidis in northern Iraq, or interviewing refugees leaves permanent scars. I see the sights of the ISIS genocide every day in my mind. Many of the people who suffered greatly also give a sense of hope because they do not give up. If they have hope, how can a privileged person like me not also have hope? 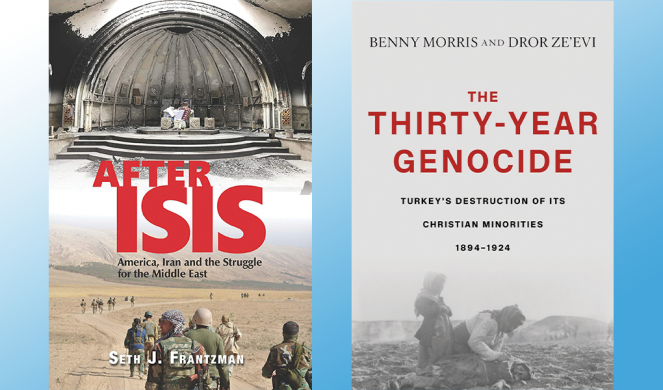 UNDERSTANDING THE WORLD CO-BOOKS OF THE YEAR

After ISIS: America, Iran and the Struggle for the Middle East

The Thirty-Year Genocide: Turkey’s Destruction of Its Christian Minorities, 1894-1924

You’ve just read about After ISIS by Seth Frantzman. The Thirty-Year Genocide explains what happened before ISIS: mass extermination. Authors Benny Morris and Dror Ze’evi, distinguished Israeli historians, draw on freshly culled archives—including government caches and missionary correspondence—to document three episodes of mass killing and removal by the Ottoman Turks. They expand the historically cited 1915-16 bloodbath of Armenians to include three decades of genocide targeting Armenians, Assyrians, and Greeks—a lengthy government campaign against the region’s Christians. Their conclusion: “The Turkish massacre of the Christians was far more sadistic than the Nazi murder of the Jews.” —M.B.

When the 27-year-old Swiss-educated Kim Jong Un took over as North Korea’s leader in 2011, the world wondered if reform had finally come to the Hermit Kingdom. Yet despite loosening government controls of private markets, Kim is as ruthless as his father and grandfather, brutally killing political opponents (including family members) and developing a nuclear program while his people struggle to eat. Author Anna Fifield paints a vivid portrait based on hundreds of hours interviewing people who have met Kim or lived under his rule, including defectors but also Kim’s aunt and uncle, his classmates in Switzerland, and the family’s sushi chef. —A.L.F.

The Outlaw Ocean: Journeys Across the Last Untamed Frontier

The Outlaw Ocean does for the offshore world what Upton Sinclair’s The Jungle did for the meatpacking industry. Ian Urbina—an investigative reporter for The New York Times with an iron stomach—tracks across the world’s oceans human traffickers, rat-infested ships, undersea grave robbers, and destitute port workers, along with governments all too happy to look away. Readers will bristle at some of Urbina’s views, particularly one uncritical chapter aboard Dutch abortionist Rebecca Gomperts’ seagoing abortion center. But this vivid account of the blue yonder compelled me to think more about a vast frontier for missions and service that is 70 percent of the earth’s surface. —M.B.

Crisis in the Red Zone: The Story of the Deadliest Ebola Outbreak in History, and of the Outbreaks to Come

The words nonfiction and thriller don’t often go together, but they are just right for Crisis in the Red Zone, a page-turning account of the 2014 Ebola outbreak in West Africa. Richard Preston’s authority on the subject as well as his storytelling skill come through in every page (see his 1994 also-thriller The Hot Zone). A large part of the book takes place at a Christian hospital in Liberia that was the first Ebola treatment center in the capital. Preston’s capture of the heroism of the Christian medical workers there, and the drama and horror of what they faced, is a gift to his readers. —E.B.

Dominion: How the Christian Revolution Remade the World

Scholar Tom Holland notes that ancient Rome had no problem assigning divine status to victors, as measured by the power to crucify opponents—but to see a crucified man as God was anathema. Holland shows how the last-shall-be-first understanding has played out over two millennia throughout the West and then the whole world, as the cross became a symbol of courage amid adversity rather than disgrace.

Some of Holland’s specific historical judgments are questionable, but he’s right that many of the writers and leaders most hostile to Christianity are unconsciously operating within its framework. Holland’s powerful writing may lead some who discount Christianity to take a look at why billions of people today think it nobler to suffer than to inflict suffering, and to profess that every human life has value. —M.O.

This page is part of this issue’s 2019 Books of the Year section. Next: “Vivid memories.”