As states legalize marijuana, tobacco companies are indicating their interest in the reefer business

Third in a series on the legalization of marijuana

Big Tobacco is joining the Green Rush. For years, four Big Tobacco companies—R.J. Reynolds, Philip Morris (now known as Altria), British American Tobacco, and Imperial Tobacco—have played down interest in the emerging marijuana market. Now, they are positioning themselves to pounce, a half century after the wacky weed first gained mass popularity.

Dial back to 1969: President Richard Nixon formally declared a “war on drugs.” Hippies gyrated in tie-dyed shirts and suede fringe vests while passing around weed at Woodstock. And Philip Morris scientist Alfred Burger wrote, “Just living among young people, I can predict that marijuana smoking will have grown to immense proportions within a decade and will probably be legalized. The company that will bring out the first marijuana smoking devices … will capture the market.”

Investigative researchers at the University of California, San Francisco (UCSF) unearthed that prediction as they spent eight months sifting through 80 million pages of tobacco industry documents that became public through multistate litigation. The researchers published their findings in 2014 through the Center for Tobacco Control Research and Education: They showed that Philip Morris, British American Tobacco (BAT), and R.J. Reynolds (now a BAT company), despite public denials, have all considered manufacturing cigarettes containing cannabis.

In 1970, a memo in the Philip Morris file suggested that marijuana could be a friend—or a foe: “We are in the business of relaxing people who are tense and providing a pick-up for people who are bored or depressed. The human needs that our product fills will not go away. Thus, the only real threat to our business is that society will find other means of satisfying these needs.”

That same year Charles Ellis, principal adviser on technical research to British American Tobacco’s board of directors, prepared a detailed plan for the company’s entrance into the future pot market. Ellis said marijuana eventually could be simply an expansion of smoking habits—comparable to a cigarette smoker switching to cigars.

Big Tobacco’s growing interest in cannabis came after a decline in tobacco use: Smoking among American adults dropped from 42 percent in 1965 to 37 percent in 1970, according to the Centers for Disease Control and Prevention (CDC). But pot’s illegality and general unpopularity stymied the big companies: According to the Pew Research Center, 81 percent of Americans in 1987 believed pot should be illegal. 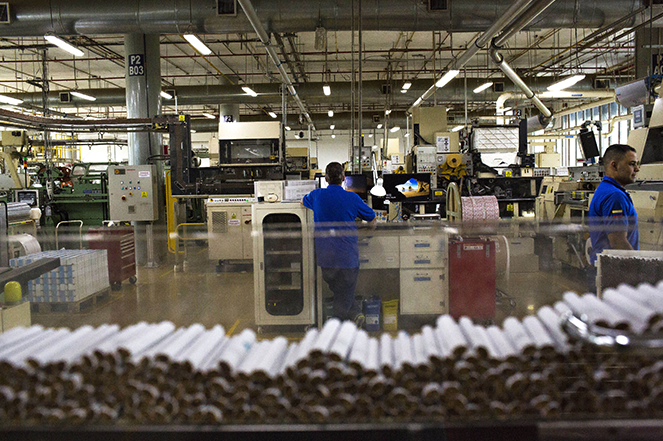 A half century after those memos, fewer than 1 in 5 American adults smokes cigarettes, and reduced demand has dropped the number of tobacco farms from 179,000 in 1982 to 10,000 as of 2012. Meanwhile, most states have legalized medical marijuana, nine have legalized recreational use, and 3 in 5 Americans favor changing laws to make pot as readily available as tobacco.

That changed environment may help Big Tobacco in two ways. First, marijuana use might encourage more people to smoke cigarettes. The CDC says high-school cigarette smoking dropped from 28 percent in 1991 to 16 percent in 2013, but the UCSF study found students who smoke marijuana are more likely than nonusers to start smoking tobacco as well. A 2003 study at the University of Florida found 65 percent of students in 10 undergraduate classes had used both marijuana and tobacco within the same hour, and 31 percent said they had smoked tobacco to prolong the effects of marijuana.

In 2015, former Altria subsidiary Philip Morris International of Switzerland filed a patent for growing genetically modified marijuana plants with increased oils, which pot experts tie to better flavors and enhanced highs. In January of this year, Altria invested nearly $20 million in Syqe Medical, an Israeli manufacturer of 3D-printed, metered-dose cannabis inhalers. The Times of Israel said the inhaler’s use for patients at Haifa’s Rambam Hospital made it “the first hospital in the world to prescribe cannabis as a standard medical treatment.” 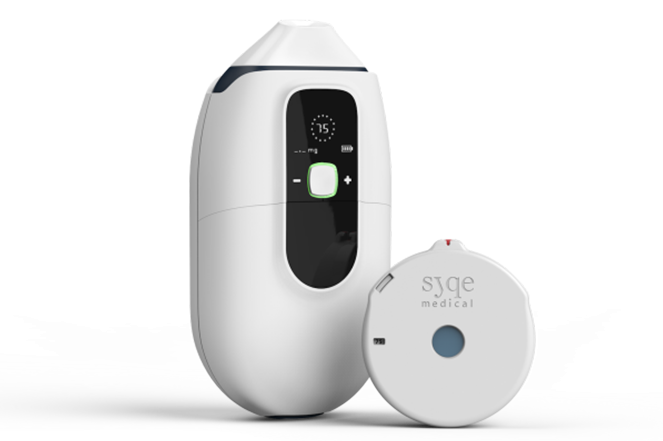 Early this year, North Carolina tobacco supplier Alliance One International (AOI) bought 75 percent of pot producer Canada’s Island Garden and 80 percent of Goldleaf Pharm, which is building a large growing facility in Ontario. Valued at $1.27 billion, AOI is one of the largest leaf tobacco sellers in the world: It provides processed product to Philip Morris International, Imperial, and R.J. Reynolds. AOI chief Pieter Sikkel said the acquisitions are part of the company’s efforts to branch out into higher-margin, fast-growing agricultural products such as cannabis. AOI also owns a North Carolina hemp company.

Altria’s goal may be to produce marijuana for vaping (a practice similar to smoking, involving the inhalation of “vapors” created by an electronic device that can heat THC, suspended in glycerin or a similar substance, for metabolization). Vaping reduces odors and coughing, and uses oils that can eliminate plant-based tars. With vaping, THC—marijuana’s high-creating active chemical—is suspended in juices with appealing flavors that are concealed in vaping pens less contraband in appearance than a rolled joint.

The coming pot battle may be vaping vs. edibles, with smoking left far behind. The pro-pot Marijuana Policy Project says vaping can deliver the drug with a potency up to 16 times higher than smoking the bud: “The vast majority of these devices utilize oils, which are concentrated forms of cannabis. While flowers can contain 5-20 percent THC, the concentrated oils contain up to 80 percent THC.” 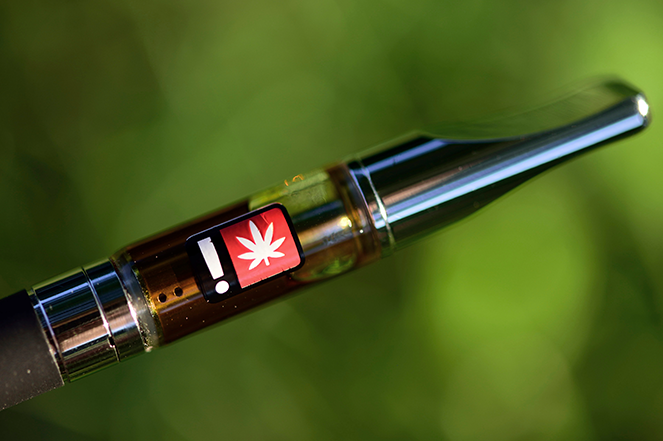 Still, a Big Tobacco entrance into cannabis space through vaping devices goes against some current pot market trends. Edibles have become the promoted means of medical marijuana delivery into the body, maybe because the image of smoking a rolled, unfiltered marijuana cigarette does not conjure up the positive image of “medical care.” Besides, High Times noted, “Digestion adds another ‘stop’ on THC’s path to the brain and produces a special form of THC, called THC-COOH, that’s longer-lasting and more potent than THC’s other metabolites.”

Big Tobacco is putting big money into softening standards for electronic smoking. Last year, Altria spent $10.3 million in federal lobbying efforts through Altria Client Services. One of the bills it pushed was H.R. 1136, the “FDA Deeming Authority Clarification Act.” According to its sponsors, Reps. Tom Cole, R-Okla., and Sanford Bishop, D-Ga., the measure would “impose commonsense licensing and advertising guidelines for vapor products.”

The bill (still in committee) would also stop the Food and Drug Administration from “making it more difficult for vapor products to come to market than cigarettes.” Altria was the second-biggest contributor to Cole in 2017-18, giving his campaign committee and leadership PAC $20,000. Altria donated $15,000 to Bishop, making it his fifth-leading contributor.

R.J. Reynolds’ parent company, Reynolds American (itself owned by BAT), has lobbied for H.R. 1136: It spent $2.3 million on Washington lobbying efforts. Reynolds also pressed lawmakers to pass H.R. 2194, the “Cigarette Smoking Reduction and Electronic Vapor Alternatives Act.” If successful, the bill would loosen the FDA’s regulatory grip on vaping devices considerably by specifically excluding “an e-liquid” and “a personal electronic vaporizer” from the statutory definition of “tobacco product.”

The Altria-Reynolds-BAT spending juggernaut is notable: The Guardian noted that 8 out of 10 cigarettes sold in the United States profit these companies alone, and reported that Altria and Reynolds American contributed $1.5 million to President Donald Trump’s inaugural celebration.

We’ll take a closer look at Big Marijuana and politics in our next installment. 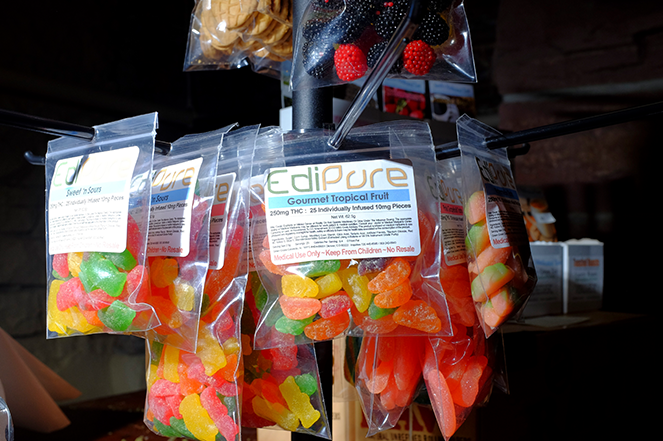 FOR MANY YEARS, poor and minority individuals and communities suffered disparate penalties for breaking marijuana laws. The desire to right that historic wrong has prompted reform efforts by people on both sides of the marijuana legalization issue.

For example, the New York State Health Department recently issued a pro-legalization report, which noted, “Over the past 20 years … the increasing emphasis on minor marijuana arrests has had a disproportionate impact on communities of color.” The report concluded that legalizing marijuana would “reduce disproportionate criminalization and incarceration of racial and ethnic minority communities.”

Massachusetts, Oregon, and California are among the states with legal adult-use recreational marijuana—and they are also getting rid of past criminal convictions. But it’s not necessary to legalize pot to stop over-incarceration. Rhode Island now allows persons with past marijuana convictions (for possessing less than 1 ounce) to seek no-cost expungement of their criminal records. Delaware and Maryland have similar laws. None of those states has yet legalized recreational marijuana.

THE JOURNAL Gerontology and Geriatric Medicine published a study of marijuana use among the elderly. The researchers looked at 18 studies published between 2000 and 2017 and concluded that adults age 50 and older had the greatest increase in marijuana use. Older marijuana users were more likely to be male and unmarried. They typically had multiple chronic diseases and psychological stress and were regular users of alcohol, tobacco, other illicit drugs, or prescription drugs. The study noted that little research exists on the effect of marijuana on older people since both the law and social taboos previously kept them from using it.

Another evidence that cannabis has become respectable, at least in academia, is the rise in university and trade school courses devoted to its study. Hocking College, a trade school in Nelsonville, Ohio, will soon offer a degree in “Cannabis Laboratory.” Northern Michigan University has a four-year degree in medicinal plant chemistry aimed at the growing marijuana industry. Several law schools, including Vanderbilt, the University of Denver, and Ohio State, offer courses in marijuana law. Cleveland School of Cannabis offers a wide range of classes.

THE GUARDIAN reported that the legalization of recreational marijuana in Oregon has hurt the medical marijuana industry. The newspaper noted that at medical marijuana’s peak, 420 dispensaries existed in the state. Since 2016, producers have switched to the more lucrative recreational marijuana market—and “the personalized patient-grower network of the medical program quietly dried up.” People who use marijuana for sickness are apparently paying much more than before—and many are turning to a black market, which legalization was supposed to eliminate.

William “Beau” Wrigley Jr., former president and CEO of the Wrigley Co. (the Chicago gum-maker), has become chairman of the board of Surterra Wellness, a medical marijuana company. Bloomberg News reported that “Surterra plans to eventually participate in the domestic recreational market, which is forecast to surge above $5 billion this year.” ConfectioneryNews.com noted that edible forms of marijuana (gummies and candies) make up an increasing share of the marijuana markets in California (37 percent), Oregon (51 percent), and Colorado (51 percent). Wrigley’s experience in confections may give Surterra an advantage over competitors. —Susan Olasky

Jim is a World Journalism Institute graduate and a former WORLD reporter.