Going after the gigs

Like many of the other half-million Californians driving Uber and Lyft, Freddy Perez liked earning some extra cash as a rideshare driver to supplement his main income. He worked about 30 hours a week subcontracting as a fenestration testing technician, so on his off days, he would pick up Uber or Lyft passengers in his 2012 Honda Insight, earning about $18 to $20 an hour.

Perez didn’t need Uber or Lyft to survive. He made about $2,500 a week in his subcontracting job, which was enough to pay his $1,850 rent in a Los Angeles suburb and live comfortably. So when he first caught wind of California’s newly enacted Assembly Bill 5 (AB 5)—or the so-called “gig worker bill” that targets companies that hire independent contractors—he paid little attention to it, assuming it only applied to gig workers. Then two weeks before Christmas, he received a rude shock: His contractors told him they could no longer subcontract him because of AB 5.

Though AB 5 was first introduced as a bill to force gig companies such as Uber and Lyft to reclassify their drivers from contractors to employees, critics say the law is so ambiguous and casts such a broad, arbitrary net that it’s shaking California’s entire independent contractor/freelancer workforce—including people, such as Perez, who choose to be self-employed. Some of those people are leaving the state. Others are starting to fight back in court.

For Perez, AB 5 basically obliterated his occupation. One of Perez’s contractors, an owner of a fenestration testing lab in San Bernardino County, offered to hire Perez as an employee at $20 an hour. It was a goodwill offer—the contractor admitted he didn’t have much for Perez to do full time. Taking that job would have meant swallowing a significant pay cut and making a daily 100-mile commute in LA traffic to do odd jobs such as sweeping the floors or filing reports. “That made no sense to me,” Perez told me: “That’s 10 hours of driving a week to basically do nothing. Literally, I could drive Uber and make that much.”

So that’s what he did. In an ironic twist of unintended consequences, Perez is now driving full time for Uber and Lyft because that’s what he could do at immediate notice. Instead of earning $2,500 a week, he’s now making about $600 a week. Perez and his girlfriend decided California is no longer a viable place to live. They bought a house in Florida and are selling whatever they can so they can move in April. Perez hasn’t found a job yet in Florida, and until he does he intends to drive Uber and Lyft. 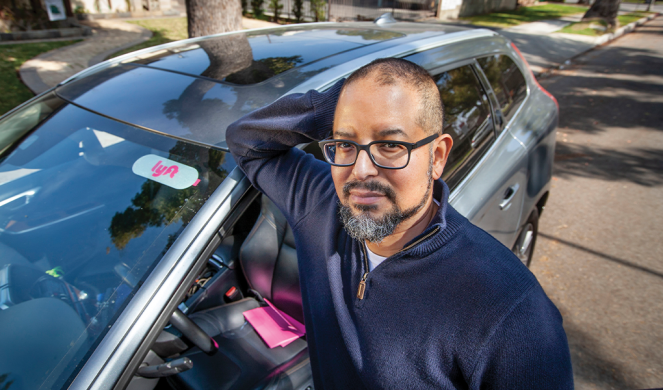 GIG COMPANIES ROSE FROM THE ASHES of unemployment, foreclosures, and evictions after the last recession, offering people quick and easy ways to make money. Meanwhile, more and more industries relied on freelancers and contractors to survive, especially with rising regulations that made it challenging for businesses to afford employees.

But some politicians and labor groups say these companies are “misclassifying” workers, thereby depriving them of benefits and evading about $7 billion a year in payroll taxes.

Enter AB 5, which Gov. Gavin Newsom signed into law last September. To send a message on how seriously he regards the bill, Newsom designated $20 million of the state budget to enforcing AB 5. Bill author ­Assemblywoman Lorena Gonzalez, D-San Diego, has hailed AB 5 for “setting the global standard for worker protections for other states and countries to follow.” Democrats in other states are proposing similar bills, and most Democratic presidential candidates have voiced support for a federal version of AB 5.

With AB 5 taking effect on Jan. 1, 2020, many companies scrambled to figure out how to comply with the law. Few want to risk doing business as usual—penalties range from $5,000 to $25,000 in fines per violation, and that’s not including legal fees and back wages.

Since the new year, some businesses have reclassified all or some of their independent contractors as employees, often transferring the costs to their customers or cutting employee pay. Some are asking their contractors to set themselves up as independent businesses so they can qualify for the “business-to-business” exemption in AB 5. Some are paying under the table. Others have chosen not to work with California-based contractors at all.

Under AB 5, all workers in California are presumed to be employees unless the employer can prove that the worker meets a stringent set of criteria established in a unanimous 2017 California Supreme Court ruling known as the Dynamex decision. In this case, truck drivers sued their employer for lost wages when the employer abruptly reclassified them as independent contractors. To determine the legal standard for independent contractors, the Dynamex decision introduced the “ABC test.”

Who meets all three prongs of the ABC test? It’s unclear. For example, a freelance cellist who has to show up at a certain time to play for a wedding and play a specific music set may not meet the “a” prong, or if subcontracting with a band, she might not meet the “b” prong—at least according to the strictest interpretation of the law. That’s the problem, said Lizelle Brandt, a Los Angeles–based attorney who specializes in entertainment and small business law: “The law as it’s written is not black and white.”

When her business clients asked her how to comply with AB 5, Brandt couldn’t give them a clear answer. Instead, she could only rate them as being at high, middle, or low risk of violation. For example, a person who forms an LLC to meet the “business-to-business” exemption under AB 5 would still have to meet all 12 criteria of another test.

More ambiguities in the law: AB 5 allows exemptions for certain professions but doesn’t clearly define those professions. Does “fine artists” include dancers, graphic designers, and cartoonists? The bill also sets an arbitrary cap of 35 submissions that freelance writers can submit to a single publication in a year, but it doesn’t define what “submission” means. All these definitions are based on the interpretation of California’s Employment Development Department (EDD), the state agency tasked to enforce AB 5.

“The practical effect of AB 5 is that lawyers will always give the safest answer to their clients,” Brandt said. That means even if someone might seem to meet the requirements of AB 5, “they’re viewed as toxic right now. … The general advice among lawyers is, ‘Stay away from independent contractors.’” 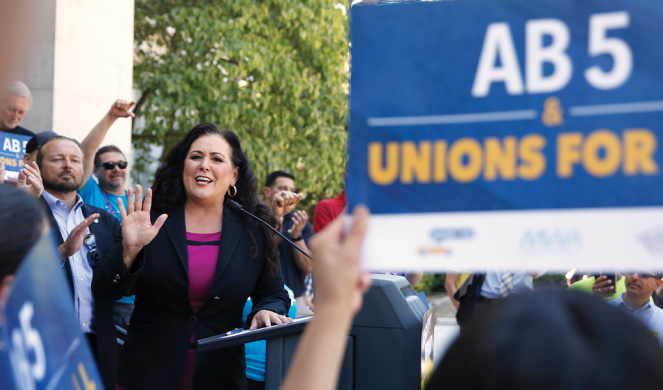 VOX MEDIA WAS THE FIRST big media company to announce it would end contracts with its 200-plus freelance writers and editors in California who wrote for its sports blogging network SB Nation. To replace the freelancers, it’s hiring 20 new part-time and full-time staffers.

Tucker Partridge, a 24-year-old marketing specialist who managed one of the team blogs under SB Nation, told me he was “completely caught off guard” by Vox Media’s announcement: “The way AB 5 was advertised, it would affect gig economy people, but it didn’t occur to me that I’m part of the gig economy.” He had just moved from Arkansas to the Bay Area, where his rent increased sixfold, and he had relied on his freelancing work to supplement his income. But he lost something more: “Not a lot brought me as much joy as writing for that site, and it was a heartbreak to let that go.”

For some writers who freelance full time, AB 5 broke not just their hearts but their careers and families. Jen Van Laar, a 47-year-old freelance journalist at RedState, a conservative political blog, said as a single mother of a son with a learning disability, she chose to freelance so she could attend parent-teacher conferences, volunteer at school, and help her son with his schoolwork. Then four days before the new year, her editor called and told her they couldn’t continue working with her unless she incorporated herself.

Setting herself up as an independent business would cost Van Laar at least $800 in taxes a year, and even that would not be a risk-free guarantee. With less than 96 hours to make a decision, Van Laar hurriedly moved to North Carolina, where she has family. There, she can continue freelancing for RedState, but her son remains in California with his adult brother because she doesn’t want to remove him from his special high-school program.

Some Californians are upset enough to fight back. Van Laar is planning to file a lawsuit with a group of other freelancers. The Facebook group “Freelancers Against AB5,” created last November, now has about 14,000 members sharing panicked questions, concerns, and stories on how the bill has impacted their lives. Other irate groups have spawned on social media—there’s “Freelancers & Gigging Musicians Fighting AB5,” “California Ride Share Drivers Against AB 5,” “California Independent Adjusters Against AB5,” and “Protect Freelance Court Reporting from AB 5.”

“The way AB 5 was advertised, it would affect gig economy people, but it didn’t occur to me that I’m part of the gig economy.”

Multibillion-dollar companies such as Uber and Lyft are also suing the state to block the bill. They say the bill violates individuals’ constitutional rights and unfairly discriminates against them and their workers. The stakes are high for these companies: AB 5 would significantly change their model of business, impairing their recruiting abilities and costing them hundreds of millions of dollars when none of them has yet to turn a profit. Uber, Lyft, DoorDash, Postmates, and Instacart are also funding a $110 million initiative to add a ballot measure that would allow them to keep their workers as contractors while offering them certain benefits. (They tried to work out a similar compromise with labor union representatives last summer before the bill passed, but it went nowhere.)

So far, Assemblywoman Gonzalez has dug in her heels on keeping AB 5, but she has acknowledged the bill needs some work. In the face of several lawsuits, including one from the American Society of Journalists and Authors (ASJA) and another from the California Trucking Association (CTA), Gonzalez introduced Assembly Bill 1850 to clarify sections of AB 5. On Feb. 27, she announced that she would be lifting the 35-submission cap for freelance writers, but they would have to wait until January for the new cap to go into effect.

Meanwhile, others are struggling to find another way to survive. Jared Lutz, a 43-year-old father of two, used to subcontract with a home service company to clean residential windows in Palm Springs. When AB 5 went into effect, the company hired him as an employee. Overnight, Lutz went from earning $80,000 a year as a subcontractor to making $15 an hour—a barely livable wage in a high-cost area like Palm Springs. He tried to find other part-time jobs in his industry, but he said the market is already saturated with former contractors in the same boat.

“My family’s devastated,” Lutz told me: “We’re struggling to put groceries on the table now. We tried everything we could to figure out a way to exist within the law, and there isn’t a way.”

Like Freddy Perez, Lutz has decided to move out of state, but he’s currently undergoing a long custody battle with his ex-wife and cannot leave until they reach an agreement. Meanwhile, he’s living off his savings and a GoFundMe account. AB 5 turned Lutz into an employee, but that made his situation worse. “I don’t need the government to protect me from myself,” Lutz said. “I’m a big boy. And frankly, I can do a better job than the government.”