God and the ‘Indianapolis’

The USS Indianapolis off the Mare Island Navy Yard, California on July 10, 1945 U.S. Navy via AP

Nov. 11, the date on the cover of this issue, is a day to remember veterans. Almost 900 died in the 1945 wreck of the USS Indianapolis, the worst naval sea disaster in American history, but 317 survived. Here are stories based on new interviews with some of them.

Peering into the churning, oil-slicked sea far below him, Marine Cpl. Edgar Harrell clung to the port rail of the sinking ship and faced his own death. It was 12 minutes after midnight on July 30, 1945, and the Navy cruiser, USS Indianapolis, was dead center in the Philippine Sea.

Minutes before, Harrell, a 20-year-old Kentuckian, had been sleeping under the barrels of the number one gun turret when a cataclysmic explosion ripped him awake. A Japanese torpedo had blown open the bow of the ship. Seconds later, another fish slammed into Indianapolis amidships. In the minutes since, the vessel had taken three sharp lurches to starboard and was listing so badly that able men could no longer stand upright. Wounded sailors were sliding past Harrell and off the ship into the swirling black tomb of the deep.

Indy still steamed forward, her ragged, open bow swallowing liquid tons of seawater like the maw of a baleen whale. But a still space in Harrell’s mind held an anchoring thought: This moment had been ordained for him by the same mighty Sovereign who was the Savior of his soul. Remembering Jeremiah, whom God rescued after the prophet’s enemies had thrown him into a miry cistern to either drown or starve, Harrell knew only one thing to do: He cried out in prayer.

Suddenly, an enfolding peace replaced freezing fear: He believed God was with him and would see him through. Less than five minutes later, the USS Indianapolis, at 610 feet long twice the length of a football field, disappeared. She went down “by the head,” in maritime parlance, plunging nose-first for 3½ miles before smashing into the seabed.

ON AUG. 19, 2017, after years of failed attempts by other expeditions, the SS Petrel, a high-tech exploration vessel owned by Microsoft co-founder Paul Allen, located the wreck of the storied ship at a depth of more than 18,000 feet. Video footage from the Petrel’s remotely operated vehicle shows Indianapolis in near-pristine condition due to a lack of oxygen and near-freezing water temperatures. Some call her discovery the most important shipwreck find since the Titanic.

The USS Indianapolis was the flagship of the largest modern fleet ever to sail the earth—and that will likely ever sail, since technology enables smaller navies now. On July 26, 1945, the Indianapolis—in the most highly classified naval mission of the war—had delivered key components of the world’s first atomic bomb to a base within flying distance of Japan. A plane would drop it on Hiroshima 11 days later.

By then, two Japanese torpedoes had sunk Indy. Because the Navy did not notice she was missing, the estimated 880 men who made it into the water alive confronted an epic fight for survival. For five days, hundreds of miles from the nearest land and most floating with only life jackets, they battled dehydration, sun poisoning, sharks, insanity, and even each other. Only 317 made it. Many of them relied on God.

For a stunning visual tour of the wreck of the ‘Indianapolis,’ visit pbs.org/uss-indianapolis/home/.

LIKE EDGAR HARRELL, Seaman 1st Class Clarence Hershberger, 19, of Elkhart, Ind., was sleeping near the bow to escape his steamy berth. When the explosions rocked the ship, Hershberger woke up in midair to see a 50-foot pillar of smoke and flame shooting straight into the night sky out of the same hatch he’d been sleeping beside only moments before.

Hershberger hit the deck half-stunned. But why was his blue dungaree uniform soaking wet? He could only guess the explosions had sent a wave over the bow. If so, why hadn’t it washed him overboard?

No time to think about that now. The deck was getting so hot it was beginning to burn his socks. He hot-footed back to his berth, grabbed his life jacket, and fought his way back topside to the port rail. Below him in the oily water, men thrashed and screamed. Hershberger slid down the hull and into the drink, having commended the outcome to his Father in heaven.

He prayed that way because of another man, his buddy, Fire Controlman 3rd Class Cleatus Lebow, 21, of Abernathy, Texas. For 20 months, the two young sailors had worked together in “fire control,” where they operated the range-finder, a targeting instrument that helped aim Indy’s huge, deck-mounted guns. They had seen a lot together, including the kamikazes swarming the American fleet off Okinawa: One plane crashed into Indy herself, killing nine sailors the day before Easter 1945.

Throughout their friendship, Lebow bugged Hershberger about Jesus all the time. And it was because of Lebow (pronounced “LEE-bow”) that Hershberger would later say “the Lord Jesus was with me” through Indy’s brutal disaster. And that strange, soaking wave that did not wash him overboard? That was his “baptism.”

Lebow, too, had abandoned ship with a prayer. He would later describe an enveloping peace and assurance of God’s sovereignty uncannily similar to what Harrell experienced: “I knew I was going home, either to heaven or back to Abernathy, and it didn’t matter which because He was in control.”

He found his way to a floater net cut free from the ship and climbed aboard with Hershberger. Lebow was not as surprised as some to find himself floating shipless in the middle of the Philippine Sea. While at home in Texas on leave, he had dreaded his return to the California shipyard where Indy was under repair after the kamikaze strike. His mother, Minervia, had reminded him that Jesus would always be with him—and Lebow realized in the water that his mother had been right. 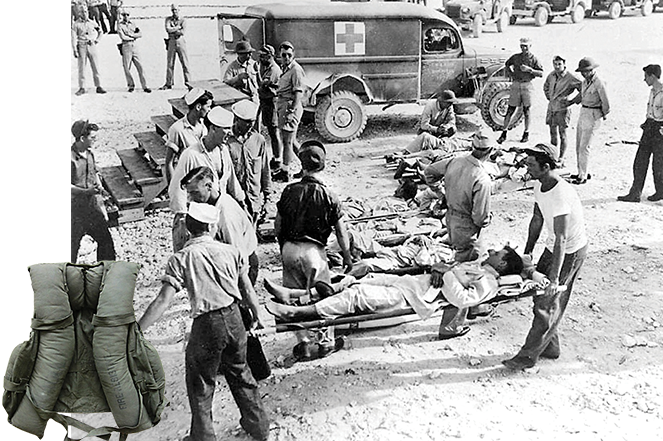 Other castaways also felt God’s presence. Yeoman 2nd Class Otha Alton Havins, 22, of Shafter, Calif., saw horrible things while leaving the ship, men burned beyond recognition, screaming in pain. After helping some injured sailors to a safe spot in Indy’s aircraft hangar, Havins had watched helplessly as an observation plane broke loose, careened down the angling deck, and crushed them.

After he jumped off the ship, Havins swam alone for a solid 20 minutes, firmly believing he was the only survivor. During this time, he held a plainspoken, running conversation with God:

“Lord, I still have a problem, and you can lend a hand anytime. …”

“Lord, move in real close and let’s get out of here!”

Another 30 minutes had passed when he heard a sailor’s voice: “Over here! I have a cargo net!”

Havins struck out swimming and later boarded a raft under the command of the sunken ship’s commanding officer, Charles McVay. Havins promised God that if he survived this ordeal, he would become a pastor.

NOT ALL THE CASTAWAYS enjoyed spiritual comfort, or even believed it available. As Indianapolis sank, she continued forward, thereby depositing men over a broad swath of midnight waters. Though these initial survivors were ultimately spread over many miles, they sometimes formed groups. Some clustered around a scant number of available rafts and floater nets. Many had only life vests. Others had nothing.

Ensign Donald Blum, 21, of Scarsdale, N.Y., secured a spot on a raft. After floating for more than 60 hours, he heard another junior officer try to lift their group’s spirits by ordering the men to pray. Blum sighed. He had heard men mumbling to God since the beginning of this nightmare—reciting the Lord’s Prayer, asking God for rescue, and so forth. Now men were talking of heaven. The idea just didn’t register with Blum. If God was going to rescue them, why had He put them in this mess in the first place? In the end, Blum believed the only one he could count on was himself.

He was a rarity, however. Most survivors would later say that though many men of weak or no faith entered the water, very few came out.

As their ordeal wore on, hallucinations and outright madness ran rampant. Men spotted lemonade stands below the surface and dove down to drink, never to be seen again. Even strong faith did not keep them tethered to reality. Shark attacks added to the terror.

ON THE FIFTH DAY, when rescue planes finally appeared in the sky and began dropping gear, Lebow let go of his floater net and swam away. Hershberger caught up to him and hauled him back to the net. Lebow waited a while then struck out again. Hershberger splashed after him and pulled him back a second time.

“Lebow, if you go again, I’ll have to let you go because I won’t have the strength to come and get you again,” Hershberger said. “What are you doing, anyway?”

Lebow’s eyes lit up. “Well, you saw them dropping that stuff from the plane? One of those big boxes is full of B-29 bomber parts. We can put an airplane together and fly home!”

Hershberger looked into his friend’s over-bright eyes. “Cleatus, I noticed it’s getting dark,” he said. “Let’s just wait until morning, and we’ll do it then.”

“OK,” Lebow said. In the tilted world of his delirium, Hershberger’s idea was just logical enough to save his life. Many men were lost at the brink of rescue when they swam willy-nilly toward the planes, but drowned because they were too weak to make it.

Both Hershberger and Lebow lived. So did Capt. McVay, who was wrongfully court-martialed for the sinking and committed suicide in 1968. A 50-year fight by his men and then others led to his posthumous exoneration in 2001.

Today, Lebow and Edgar Harrell, both 93, are among just 18 Indianapolis survivors still living. Donald Blum and Alton Havins have died, Havins having kept his promise to God to become a pastor.

Clarence Hershberger died in DeLeon Springs, Fla., in 2015 at the age of 89. Those who loved him allowed that he could sometimes be a curmudgeon who spoke his mind without compunction. But for 70 years after the sinking, Hershberger didn’t have a single cross word to say about Cleatus Lebow.

Instead, he would say, smiling, “Cleatus gave me Jesus.”