IN THE NEWS | A Peach State runoff will once again decide U.S. Senate margin

Exactly one week after the November midterm elections, former President Donald Trump made an announcement that ­officially kicked off Campaign 2024: He is running for president again.

However, Campaign 2022 isn’t quite over. Even as Trump made his announcement at Mar-a-Lago in Palm Beach, Fla., on Nov. 15, voters in Georgia were gearing up to head to the polls for the second time to pick a U.S. senator.

The Peach State has slated a Dec. 6 ­runoff election between GOP candidate Herschel Walker, a businessman and ­former Heisman-winning University of Georgia running back, and Sen. Raphael Warnock, the incumbent Democrat. Walker lagged 35,000 votes (roughly 1 ­percentage point) behind Warnock in the general election. Georgia requires candidates to garner at least 50 percent of the vote to win office, and neither man did. A similar high-stakes Senate seat runoff occurred in Georgia following the 2020 election.

While Democrats have already secured the 50 seats needed to maintain control of the Senate, Georgia’s runoff will determine how easily they can pass federal legislation during the next two years. But the race’s outcome is far from certain. Although a Trump endorsement boosted him during the primaries, Walker has proven to be a candidate with baggage. He admitted fathering at least three children out of wedlock and has denied accusations that he paid for two ­girlfriends to obtain abortions. One of the women, the mother of one of Walker’s children, produced a receipt for a 2009 check for $700 that Walker admitted to signing. 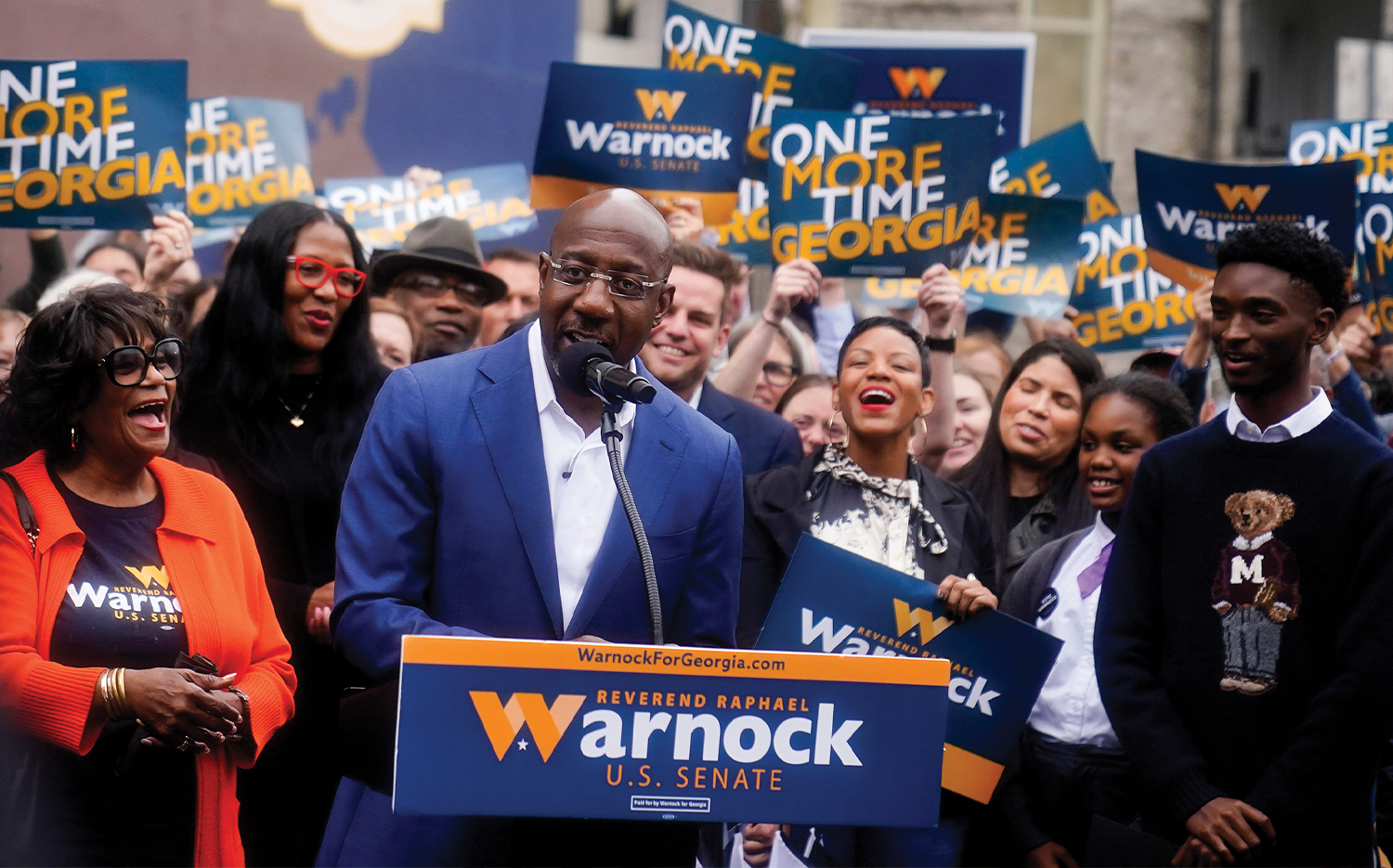 Warnock speaks at a rally in Atlanta. Brynn Anderson/AP

Other factors may also tip the Georgia runoff: Legal changes implemented last year changed the rules, reducing the time between general elections and runoffs from eight weeks to four. Also, the new voter registration deadline was Nov. 7, a day before the general election. That means only previously registered voters can vote in Round 2. Finally, it’s unclear how the 2.1 percent of voters who supported Libertarian candidate Chase Oliver on Nov. 8 will vote on Dec. 6.

At the national level, Republicans need a win. With at least 50 seats claimed, Democrats in the Senate can count on Vice President Kamala Harris’ tie-breaking vote to pass gridlocked legislation. If Warnock keeps his seat, the Democratic majority is even stronger. But if Walker manages to flip the seat, the chamber’s 50 Republicans will need only to convince a single Democrat to cross the aisle—think Sen. Joe Manchin of West Virginia or Kyrsten Sinema of Arizona—in order to block President Joe Biden’s progressive legislative agenda.

With so much at stake, the gloves seem to be coming off: Warnock, a Baptist minister, had previously avoided addressing Walker’s scandals. But at a Nov. 10 public appearance in Atlanta, he read off the list of accusations against Walker, including claims of domestic abuse. “This race is about competence, and it’s about character,” Warnock said. “Some things in life are complicated. This ain’t one of them.”

Warnock pastors Ebenezer Baptist Church, Martin Luther King Jr.’s former church in Atlanta, but bills himself as an abortion proponent. His church is also under investigation for a ministry arm evicting residents of low-income housing during the COVID-19 pandemic. (During his 2021 candidacy, Warnock criticized landlords who evicted tenants during the outbreak.)

Some Republicans think Trump’s presidential announcement came at a terrible time. Nearly all of his high-­profile picks in tight races across the country lost in the midterms, including in Georgia. Strategists say the possibility of another Trump term could scare moderates into voting against Walker as a proxy condemnation of the controversial former president.

The deciding factor in the race may well be the supporters of self-described “gay and armed” Libertarian candidate Chase Oliver, whose name will not appear on the ballot this time. Libertarians generally support small government and greater individual autonomy. But Elizabeth Melton Gallimore, executive director of the Libertarian Party of Georgia, warned against assuming those principles alone will push Georgia Libertarians in Walker’s direction.

“Someone who is concerned about Second Amendment issues or the COVID-19 lockdowns might be more inclined towards Walker,” Melton Gallimore said. “Other people are more concerned about ending the war on drugs or criminal justice reform or qualified immunity, and those people might lean Democrat. And then a large number of people are just not going to vote because they refuse to vote for the lesser of two evils.”

Oliver has declared he won’t endorse either candidate, leaving his 80,000 ­voters to pick for themselves. That’s plenty to tilt the race—and the Senate.