Friends out of water

American travelers have dreamed of the time when borders will fully reopen and they can again explore other lands and cultures without a COVID-19 test. If the Cinque Terre region of Italy is on your wish list, and you have little ones in the house, you might enjoy Pixar’s new animated release Luca, available for streaming exclusively on Disney+. The coming-of-age film about friendship gives a taste of the beauty of the Italian coast.

Residents of the fictional town of Portorosso have long thought that mysterious beings live in the waters off their picturesque village. Fishermen report strange sightings and sometimes mysteriously lose items from their boats to the “sea monsters.”

In the bright waters of the Mediterranean, Luca (voiced by Jacob Tremblay) tends his family’s school of “sheep fish” and dreams of life above the surface. Luca has a tail and fins but a very human appearance. He lives in a house with his parents. Luca’s mom doesn’t seem to worry about sharks or predator fish: The real danger to her family is the world of humans on land. She warns Luca, “We do not go anywhere near the surface!”

But with his adventurous friend Alberto (Jack Dylan Grazer) leading him on, Luca discovers that when he leaves the sea, he transforms into a human boy—no tail, no fins, no scales—at least, as long as he stays dry. Alberto and Luca explore the relative safety of a small island, but soon find themselves wanting to discover more about the nearby coastal town. Their ultimate dream is to get a Vespa motorcycle, freeing them to explore anywhere they want in this fascinating new world.

The boys fall in with one of the town’s underdogs: Giulia (Emma Burman) has lost the town’s annual triathlon to her rival Ercole (Saverio Raimondo), whose cartoonish bullying establishes him as the mild villain of the film. Giulia’s father is an enormous, intimidating figure, who despite the lack of one arm, could crush his daughter’s friends with ease. He takes a liking to them, especially as they help him find the best fishing spots with their insider knowledge.

Luca and Alberto can buy their precious Vespa if they win the triathlon with Giulia, but the boys face real danger from the townspeople if their “sea monster” identities are discovered—and villainous Ercole is suspicious there’s something fishy about this pair. 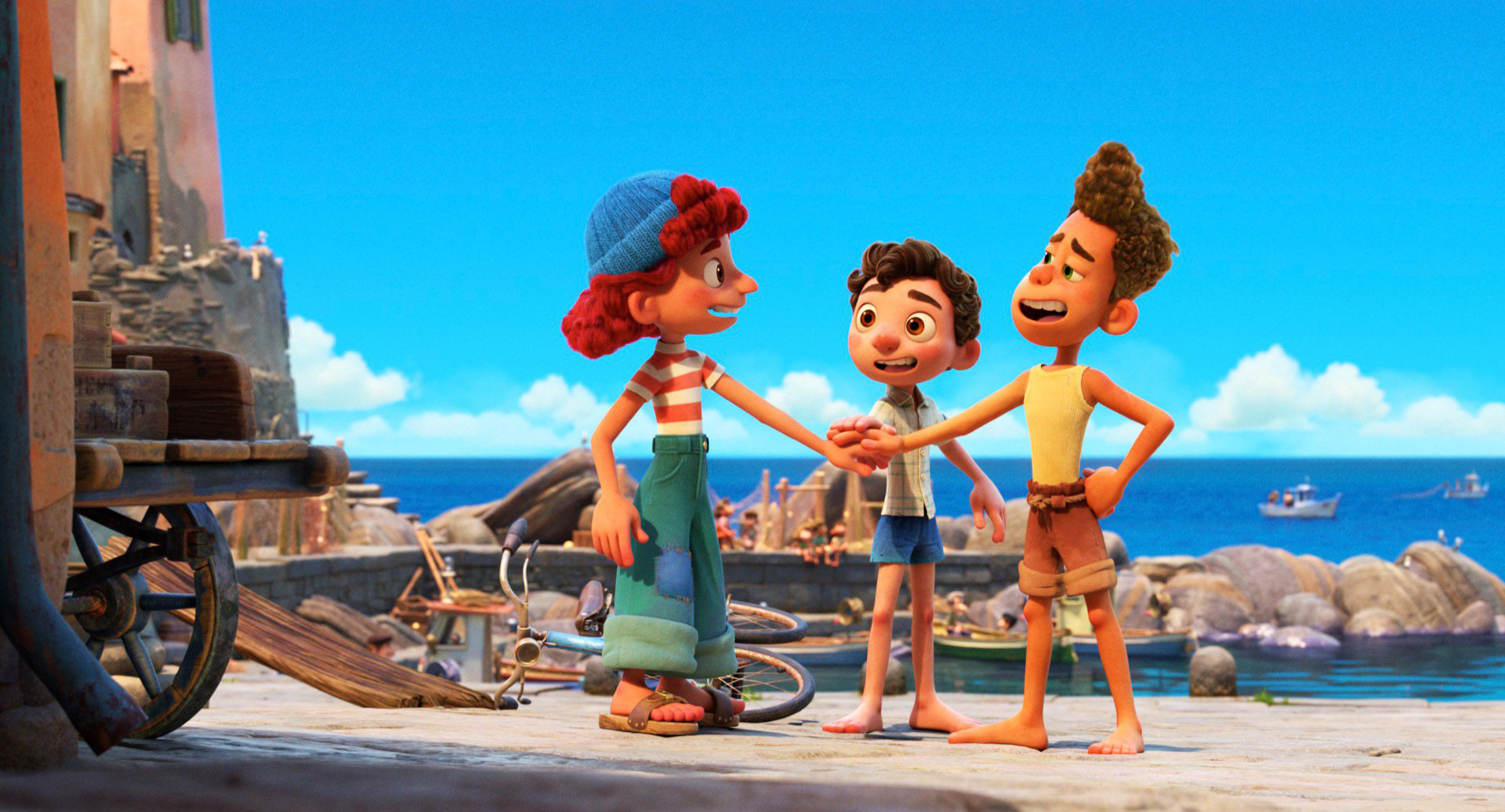 The beautifully animated film is a joy to watch: The village of Portorosso is perched above the sea, with narrow, winding roads leading into the hillsides. Poking fun at his own culture, director Enrico Casarosa envisions the triathlon as swimming, eating delicious pasta as quickly as possible, and then cycling through the hills.

Some viewers of Luca have speculated the boys’ friendship is intended to imply a homosexual awakening, and that the town’s eventual acceptance of these unfamiliar sea creatures echoes society’s affirmation of the LGBT community. Director Casarosa has denied that claim, though, and there’s really not a reason for viewers to read it into the story. In an interview with Screen Rant, Casarosa stated, “We were quite aware that we wanted to talk about that time in life before boyfriends or girlfriends. So there’s an innocence and a focus on the friendship side. I feel like the story would be a little different in that it’s slightly more complicated when romance comes in.”

Luca, rated PG with cartoon violence and mild insults, does have a refreshing innocence that harks back to movies of an earlier era. And the message that we ought not to judge people based on their appearance or skin color is a timeless one.

Marty VanDriel Marty is a TV and film critic for WORLD. He is a graduate of World Journalism Institute and CEO of a custom truck and trailer building company. He and his wife, Faith, reside in Lynden, Wash., near children and grandchildren.
COMMENT BELOW