On a Wednesday in May, a blonde, slender young woman walked into ChristyAnne Collins’ Texas City, Texas, pregnancy center—a toddler on her hip and baby twins in a stroller. Collins recognized her: Years ago, Collins said, she had been a regular in the center’s earn-while-you-learn program. In that program, moms could stick around to watch parenting videos and complete homework assignments that would earn them maybe 60 or 70 “baby bucks” in a given day, enough to cash in for a few packages of wipes and diapers and a couple cans of baby formula. Collins said this woman used to buy baby formula every week with her baby bucks.

She hadn’t been back for a while when Collins saw her again that day. Collins said she’s now working a job and doesn’t need the day-to-day support of the center that she needed with her oldest, now in school. But a national shortage in baby formula brought her back to the center. This time, though, the center didn’t have what she needed.

The shortage has left many parents unable to find the formula they need to feed their babies and turning to local pro-life pregnancy centers for help. While some pregnancy centers with an excess have been able to give cans away to families in their communities, others like Collins’ center are either low or completely out and sometimes unable to help women as they usually do: a situation that has been hard on both pregnancy center clients and staff.

In February, the popular formula brand Similac issued a recall of formula produced at a facility in Sturgis, Mich., connected to multiple cases of bacterial infections in infants. Because of that recall, centers across the country had to get rid of can after can of Similac that donors had either given to them or paid for. 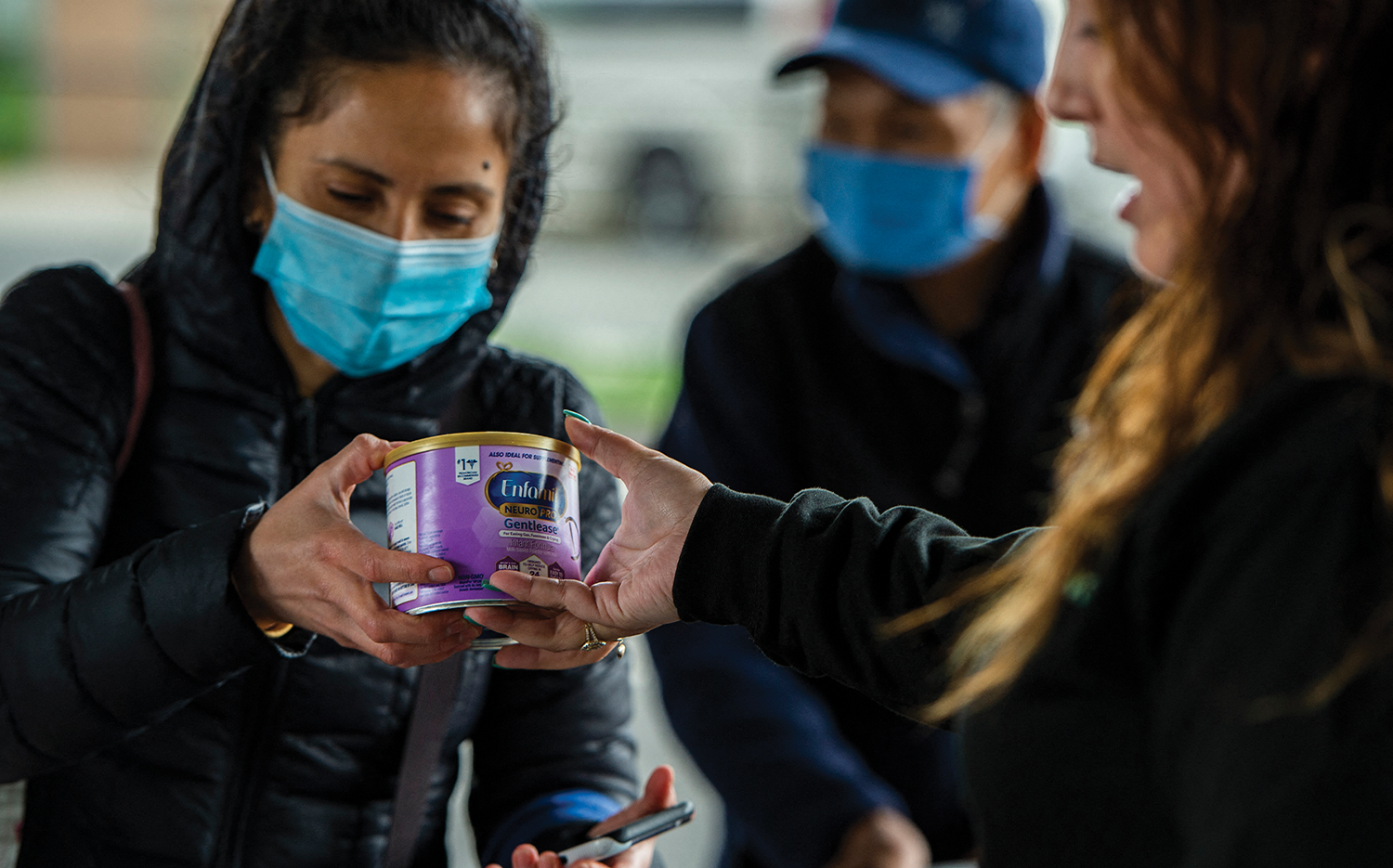 A woman receives a can of formula at a food pantry in Chelsea, Mass. Joseph Prezioso/AFP via Getty Images

Heather Lawless, director of Reliance Center in Lewiston, Idaho, said her center lost six cans. Sarah Bowen, executive director of the Promise of Life Network pregnancy centers in Pennsylvania, said her centers removed about 50 cans from their shelves. Collins estimated they sent back more than 70 cans.

The Food and Drug Administration ordered the Michigan plant to close in February due to an inspection of the facility that found unsanitary conditions. Since then, stock of formula on store shelves has declined even more until in some areas it has become almost inaccessible.

Some pregnancy centers, though, are set up to help their communities for a while longer. Staff at Bowen’s centers in Pennsylvania said, through the generosity of donors and moms in their program sharing with one another, every formula need has been met so far, and they still have about 20 cans between their four offices. A pregnancy center in small-town Hillsdale, Mich., announced in a press release on May 12 that it had an excess of formula due to a drop in clients during the COVID-19 pandemic. Since March, staff members have been advertising the free formula in Facebook posts that each get dozens of shares.

Jeri Lynn Scott, the director of a center in San Antonio, Texas, said they had no formula donations in March but haven’t run out yet because one of the center’s major donors is an Enfamil sales rep and donated a few hundred cans to the center sometime last year. Her center on May 16 started a baby drive for local families to pick up free cans of the formula along with other items like diapers and wipes. Of the centers she knows of, Scott said hers is one of the few that still has formula.

Collins said her Texas City pregnancy center usually keeps about 15 or 20 kinds of formula in stock, anywhere between 100 to 200 cans. “We are down to nothing,” she said on May 16. Collins said the last donation they received came about three weeks earlier, when a mother—one of the center’s clients—gave the center three extra cans of formula that she had purchased with her coupons through the government’s Special Supplemental Nutrition Program for Women, Infants, and Children (WIC).

Collins estimated that her center receives about 15 to 20 calls a day from families looking for baby formula. On top of that, up to 10 women might stop by in a given day to ask for some, a massive increase from the roughly two to three drop-ins a week before the shortage, according to Collins.

“We just have a constant parade of women coming to the door just saying ‘WIC sent me here to see if you guys have any formula,’” she said. The woman who arrived with her twins and toddler in May was one of the women sent by WIC. Collins said she was also one of the multiple women who have broken down in tears when they realized the center could not help. “These moms are so distraught that there’s nowhere to meet the needs of their babies,” she said, adding that it’s been “heartbreaking to our staff and volunteers” too.

“It’s extremely emotional when you see a mother wanting to provide for her child and no matter what she does she can’t,” said Collins. “We’ve got the reputation in the community of being the go-to organization when a mother needs assistance. And they come to us, and we can’t help them.”