First to hurt, last to recover

As a pandemic continues, poverty-fighting ministries struggle to meet needs, with decreasing donations and fewer volunteers. But many persevere, trusting God to provide

Thirty-eight black metal cots, topped with blue blankets, lined the large room where men can sleep. During the day, residents earned their stay in the mission’s Worth Shop where they could grind coffee, break down donated items to recycle, or craft blankets out of plastic bags.

Forty people can fit in the Worth Shop, but now only 10 work at a time, 6 feet from each other. Staff members take temperatures and use a questionnaire to rule out COVID-19 symptoms before letting people in the mission. They serve meals in to-go containers and divide clients between the dining room and white picnic tables outside.

James Whitford and his wife founded Watered Gardens in 2000. The ministry was WORLD’s 2019 Hope Award grand prize winner. As the coronavirus spreads, Whitford knows some homeless shelters have stopped services and intake, but that’s not an option for Watered Gardens: “I feel that God has given His people a mandate to care for the poor. It’s just not contingent upon personal risk.” The challenges of staying open come with opportunity. Recently, the staff has found the people they serve are becoming more receptive to the gospel. Whitford called the pandemic “a new, fresh wrestle with the idea of your mortality.”

Just as many for-profit businesses suffer during the COVID-19 pandemic, charities and ministries face questions too: Because of social distancing requirements or government orders, volunteers are now limited in how much work they can do. Some nonprofits face steep revenue shortfalls and murky forecasts for charitable giving. Meanwhile, the same crisis that created these challenges creates greater needs among these nonprofits’ clients. Despite the problems, many charities are finding solutions to keep serving. 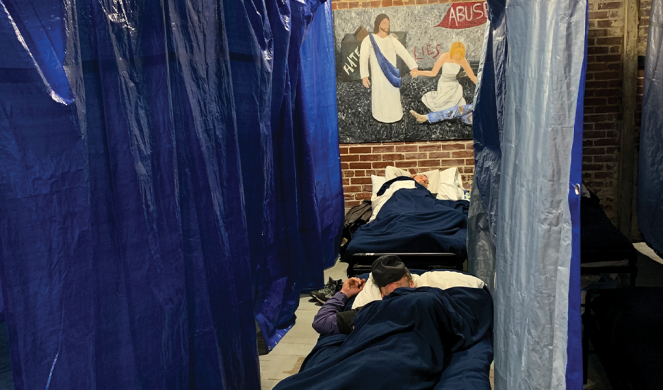 WATERED GARDENS hasn’t yet suffered fewer donations since the coronavirus pandemic, as some nonprofits have. The shelter’s real problem is personnel: After the outbreak, it lost almost half its 200 mostly older volunteers. The office staff is working from home, and the 17 on-site staff members are straining to cover everyday tasks and recruit new volunteers.

Care coordinator Beth Zimmerman and her volunteers used to get to know new clients and help them set goals for becoming independent again. Now without her team, Zimmerman quickly screens people at the door to determine if they need immediate relief, then sends them on. Volunteers used to walk people through the mission’s market and help them decide what to buy. Now kitchen manager Casie Augustine fills orders herself, and buyers don’t even enter the market. Staff members and residents are also serving meals, another volunteer job. Whitford sends the regular volunteers a weekly video update to stay in touch. “I don’t want to lose them,” he said.

The coronavirus leaves would-be volunteers in a dilemma: Many have time and want to help, but they are nervous working at nonprofits that require in-person contact—especially with homeless people who cannot easily maintain hygiene or distance. Kevin Scally, chief relationship officer for the nonprofit watchdog Charity Navigator, said some nonprofits have found a solution in “virtual volunteers.” People raise awareness through social media or create online fundraisers. Volunteers can update websites and help organizations communicate with supporters. But ministries like Watered Gardens can’t shift their work online.

Other organizations have a different problem: plenty of volunteers, but fewer ways to use them.

As the coronavirus hit, Huggins said, Home Works initially continued making repairs but soon stopped using volunteers and only sent staff to handle emergencies. One of the group’s last repairs was on an HVAC unit for an elderly woman in Columbia. Four weeks earlier, adult leaders and around 10 student volunteers had repaired her leaky roof and painted the home. When her HVAC unit broke, she called back, and the same Home Works site leader brought a local contractor to fix it (the same leader later checked on the woman and brought her groceries).

Home Works stopped making repairs four weeks ago. Home repair is considered an essential service, but Huggins said bringing groups into contact with elderly clients was a risk he didn’t want to take. Still, people keep asking to volunteer with the ministry. 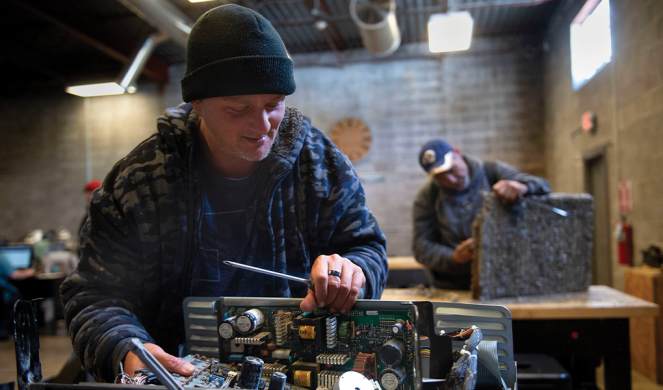 THE INABILITY TO USE volunteers isn’t the only problem Home Works faces. Since its founding in 1996, the organization has weathered economic ups and downs, but “nothing like this though,” Huggins said. “Everyone is on a pause for giving right now.” Donations are dropping: Huggins estimates the ministry’s total income in March and April has been about $17,000. A typical monthly budget is between $65,000 and $75,000. Home Works still accepts applications from potential clients, but the staff says the repair might not happen for a year or more: Each project takes a month to coordinate, allocating money for materials and finding the right team of volunteers.

Scarlet Hope is a Louisville, Ky.–based nonprofit that helps women in the sex industry and also won a 2019 WORLD Hope Award. Before the pandemic closed strip clubs, staff and volunteers would visit the city’s clubs with a meal for the dancers every Thursday. Scarlet Hope volunteers set up the meal and befriended the dancers as they ate, sharing the gospel and other work options. The ministry also runs a career development program for those who leave the sex industry.

Most charities hold spring fundraisers before the traditionally low-giving summer months. But restrictions on gatherings means those events aren’t happening. Scarlet Hope raises funds through a women’s brunch the week before the Kentucky Derby. Last year, 280 ladies dressed in derby hats, fascinators, and dresses gathered at a venue to enjoy Kentucky hot brown sandwiches, chicken salad croissants, fruit, and cheese. Artwork from ladies in Scarlet Hope’s career development program decorated the tables. A speaker from a task force on human trafficking spoke, and attendees bid on purses and derby hats in a silent auction. Founder Rachelle Starr said the event brings in anywhere from $15,000 to $25,000. When Kentucky banned large gatherings, the staff postponed this year’s event to June 20. If the ban remains, Starr said staff might try livestreaming the event.

But moving fundraisers online isn’t always an option. Calvary Home for Children cares for foster kids in five cottages in Anderson, S.C. Community relations director Laura Lindsley asked donors if they would like an online version of the ministry’s May banquet, but donors said they already spent too much time watching computer screens. Staff members may send letters to donors instead, but the banquet typically raises $40,000: “That’s going to be a big loss in revenue,” said Lindsley. “That’s a big fundraising event for us for the whole year. So that’s a little unsettling.”

Private donations are almost certain to drop in the coming months as well. Starr said a nonprofit adviser recommended she prepare for a 50 percent loss in revenue this fiscal year. Scally, of Charity Navigator, said most nonprofits are forecasting a 30-40 percent loss in revenue between March and June. He recommends nonprofits diversify funding and cut costs when possible, but their best bet is telling donors the situation and asking for help: “It’s almost a ‘save our sinking ship’ approach,’” said Scally.

Scarlet Hope so far has laid off seven employees in its bakery, which employs former sex workers and others in the community who need jobs. Its landlord discounted Scarlet Hope’s rent, and local churches are donating supplies. Calvary Home house parents are cutting frivolous spending—baking a child’s birthday cake instead of buying it, for example. At Watered Gardens, the staff is also sticking to necessary expenses: They recently canceled a cosmetic painting project at the shelter.

Rick Cohen at the National Council of Nonprofits said charities feel financial hardship first and recover last, since they need others to feel financially secure enough to give. Cohen referenced the Great Recession of 2008-09: Charitable giving dropped and took nearly a decade to recover. He predicted this pandemic will be much worse, and the longer it lasts, the worse the aftermath: “Some of these [nonprofits] know their doors will never open again, and there’s not much they can do, unfortunately.”

“I feel that God has given His people a mandate to care for the poor. It’s just not contingent upon personal risk.”

But some nonprofits are actually seeing their giving increase. Refugee Hope Partners in Raleigh, N.C., provides English classes, homework help, and Bible studies for refugees. When the pandemic hit in March, the organization scrambled to help refugee families, and executive director Michele Suffridge says she has been too busy to explore options for financial help. But donations are still coming consistently. On top of that, two donors offered matching grants for extra support: “It’s been a real time of encouragement.”

Refugee Hope Partners’ experience might not be an outlier. Charity Navigator uses criteria to rate nonprofits and help donors identify organizations worth supporting. Web traffic increased 10 percent in March and April, according to Scally. He said people want to help, and many believe the best way is to support effective nonprofits.

Another financial solution came when President Donald Trump signed the CARES (Coronavirus Aid, Relief, and Economic Security) Act on March 27. Among other provisions, it lets nonprofits apply for loans through their banks to keep employees on the payrolls. Many have applied, including organizations that usually refuse government funds. 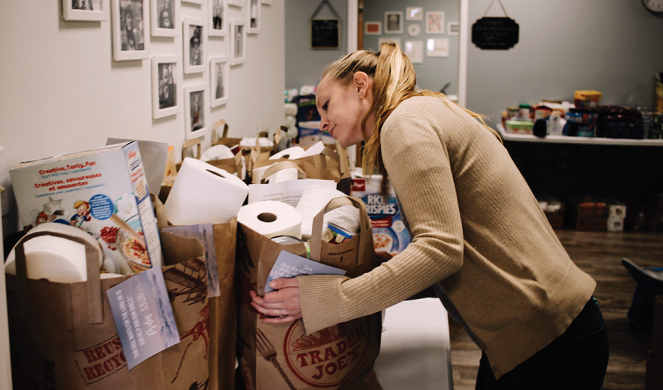 WHETHER OR NOT particular charities see more or less charitable giving during the coronavirus pandemic, their clients’ needs continue. And in some cases, the coronavirus creates even more need.

In Raleigh, Refugee Hope Partners asked churches to donate food to refugees, and volunteers packed 250 food boxes for the families. “We have been matching refugee families with churches, small groups, and Sunday school classes to provide food as long as this goes on, as long as people need it,” Suffridge said.

Joplin, Mo., is not a coronavirus hot spot—officials had only confirmed six cases of COVID-19 by late April—but Watered Gardens is still receiving increasing requests for food, some from people who are not homeless.

The Scarlet Hope staff is working from home, but some go to the office one day per week to give out supplies to clients. Women line up 6 feet apart in the parking lot, and a staff member sits at a table near the door to record the clients’ names, needs, and the number of people in the family. One by one, the women step inside, where a staff member wearing gloves and a mask hands her what she needs. So far, Scarlet Hope has given 46 families free food, clothes, diapers, and cleaning supplies. They invite all the ladies back the next week, but they see new faces each time.

The seven ladies in the career development program complete classes online and talk with their case managers by phone. Louisville’s strip clubs are closed, so Scarlet Hope staff texts the dancers to offer help.

When lockdowns began, Starr wondered how volunteers could reach women without entering clubs, but Scarlet Hope keeps getting more calls from new women. Starr doesn’t know how some of them got the ministry’s number: “God is still at work. He hasn’t left us. He hasn’t left them.”