Finding the road back to work

Amid a pandemic labor shortage, more companies are willing to hire workers needing second chances. But some entrepreneurs make that their mission

Part 3 of a series

“In three years I lost everything.”

Michelle Hill had rebounded from drug addiction and a felony conviction in her 20s to what she terms a “soccer mom” lifestyle in her 40s, building a satisfying career for more than 20 years in payroll processing. Then she took a fateful turn back to drugs to cope with the “empty nest” when her son left home: “Within three months I had a felony [and] lost my job. It took another two, three years to lose my house.”

But after months in jail, Hill, now 52, moved in July into Hillsborough House of Hope, a transitional shelter for women in Tampa, Fla. Residents must stay clean and attend church, addiction recovery meetings, and house Bible studies. If unemployed, they must actively seek jobs.

Now employed at a call center, Hill was “scared to death” when her company processed her background check to confirm her job offer. She can reel off a list of firms that, after seeing her criminal record, rejected her for jobs that she says were “perfect fits” with her payroll processing experience: “I did those jobs as a felon [before] and … I could do them today. I just need someone to believe in me and give me another chance.”

Earlier this summer, WORLD editor in chief Marvin Olasky reported on the trouble blue-collar workers were having finding new jobs after COVID-19 layoffs. Weeks later, he and several World Journalism Institute students profiled a Texas ministry helping train the long-term unemployed (and some with prison records) to reenter the workforce. Now, months into the much-publicized shortage of workers in the wake of COVID-19 lockdowns, some employers are more open to giving opportunities to workers like Hill. Though more employers are willing to take chances on workers with blips in their backgrounds, mission-minded entrepreneurs are purposely hiring—and mentoring—workers who need a second chance.

“I’M ONE OF THE MOST POPULAR people in town,” says Michael Jalazo. He runs the Tampa-area Pinellas Ex-offender Re-­entry Coalition and says he’s never seen anything like the current job market in his prior 20 years of leadership at PERC: “I’ve never had employers who were so desperate for workers.”

But hiring workers with prior convictions is still something most employers hesitate to speak about openly (see sidebar). Jalazo demurred when I asked him for examples of companies now looking to hire ex-convicts: “Some of our best employers don’t advertise.”

House of Hope Program Director Linda Walker tells residents about employers she knows to be “background-­friendly”—open to hiring workers with problematic pasts.

The Wawa convenience-store chain, actively expanding in the Tampa Bay area, is on Walker’s list. “I’ve got six girls working at Wawa,” she says. Ja’taylor Mcneal, 27, a former House of Hope resident, is one of them. She got a job with Wawa in the spring, but before that a couple of other locations in the chain turned her down. She doesn’t know why things went differently with her current manager, but her extroverted personality has helped her get off to a good start: Four months into the job, she had already learned to work multiple sections of the store, from checkout to deli, and was in line for a new opportunity. “I love customer service. I’m the hyper one,” says Mcneal.

Temporary employment options are also available, regardless of worker backgrounds. Both Hill and Lisa Parker, 49, another House of Hope resident, described a variety of jobs they had worked in the past through PeopleReady, a temporary employment agency. Applicants answer a short series of basic questions, then can download an app that lists daily job possibilities, most of which don’t require a background check. They pick up opportunities when they want and get paid for the days they work. “As long as you’re willing to work … you’re going to get to work,” says Parker. She had a steady temp assignment at a local oil products manufacturer but was only making $10 an hour.

Now Parker is happy to be starting a permanent job with Aramark, the food service vendor at the University of South Florida, with starting pay of at least $12 an hour. She interviewed with Aramark at a job fair she learned about over email, and managers raised no issues after her background check.

WHILE WORKERS are having some success through word of mouth, others begin working for employers who are intentional about hiring and mentoring people getting back on their feet. Valerie Lloyd founded Clean Sweep, a Tampa cleaning business, to help workers needing a fresh start move from entry-level jobs to greater self-sufficiency. Lloyd, now in her mid-30s, had been working in credit card processing sales but was looking for something more fulfilling: “I had been praying about how God could use me.”

The name “Clean Sweep” referred both to Lloyd’s career change and the break from the past that her initial business partner (who’s no longer with the firm) was making as a recovering alcoholic. Clean Sweep’s early employees were often individuals her business partner met at 12-step groups, but Lloyd has found that referrals from structured programs like House of Hope or Created—a Tampa ministry to women emerging from the sex industry—are more likely to be successful.

All Clean Sweep workers start out at $12 per hour, acting as helpers to experienced cleaners. Lloyd also trains them to set themselves up as independent cleaning contractors. Those who prove themselves over a period of three to six months can take the next steps toward becoming contractors, potentially doubling their pay. Lloyd continues to provide and schedule cleaning jobs for them, and they’re eligible to get helpers of their own. 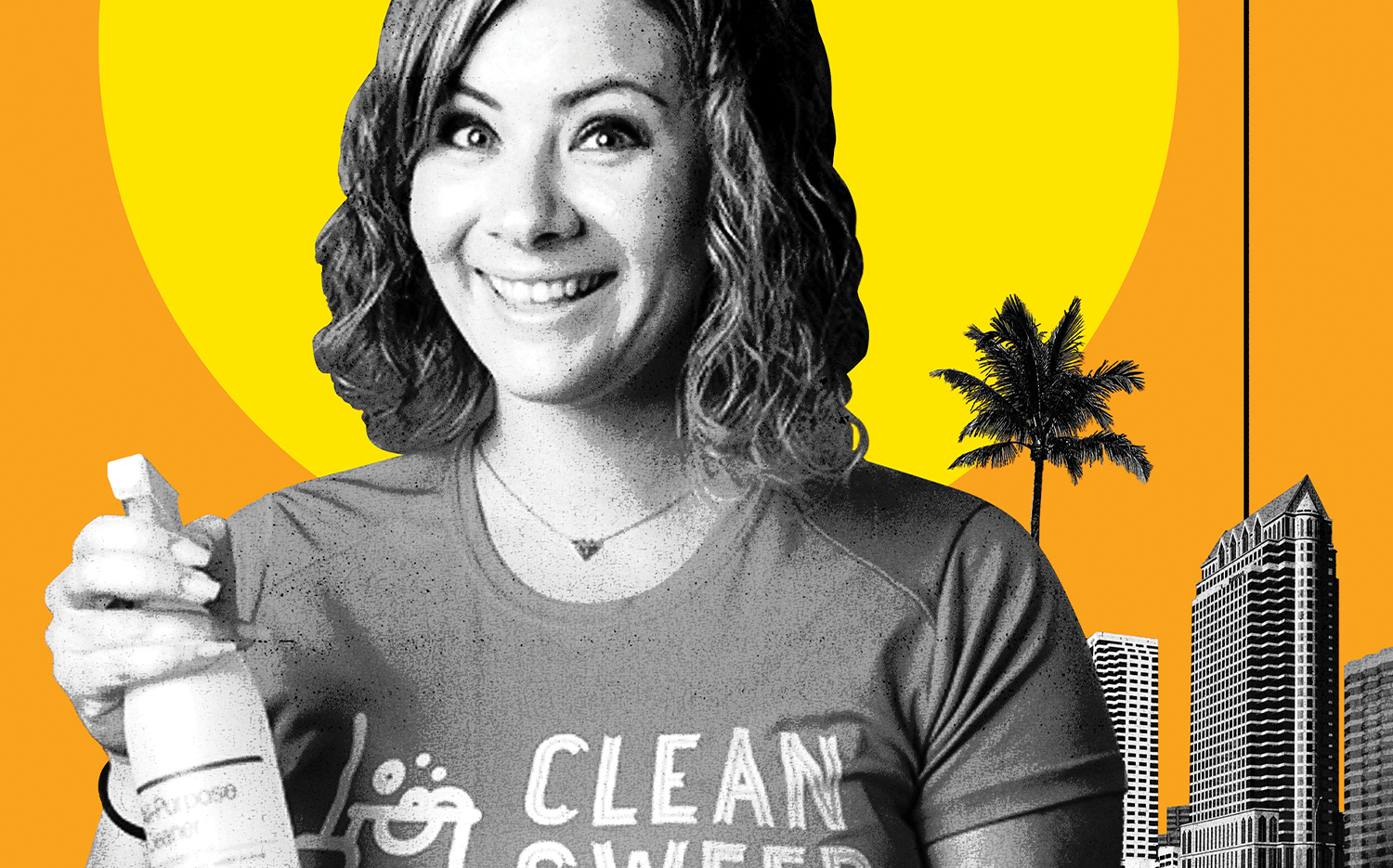 Lloyd uses the metaphor of a bus to explain the opportunity to prospective employees: “I tell them, not everybody’s going to want to stay on the bus, but the bus is going to keep moving for whoever wants to ride.” Like a bus driver, she’s willing to pick up someone who got off but wants back on later. But she’s also willing to teach them how to drive.

Lloyd also offers a weekly enrichment call on Zoom, leading discussion sessions on motivational books she buys for the group, and sends out inspiring messages, like a current series on prayer. Workers are free to hold any faith or none, but “everybody knows going in that this is a faith-based company,” says Lloyd.

Over three years, only one worker thus far has made it to independent contractor status, though a handful of others are advancing on the path after their own setbacks. “Relapse is a part of recovery for these women,” says Lloyd. A few ­haven’t even been able to make it through their first week. She acknowledges the time and attention workers can demand is draining, but every success is rewarding. Recently a couple of women were able to purchase their own cars, a crucial step toward working independently. “Just to see these two women have cars, that’s a victory,” says Lloyd.

Clean Sweep has doubled in size each of the past two years and now handles 50 to 60 weekly cleaning jobs, Lloyd estimates. In 2020 she was able to maintain clients and picked up some cleaners who lost work with other firms. Growth didn’t come without costs, though. “There’s many days I had success with hands covering my face, and on my knees,” says Lloyd. At times she has wanted to stop before the initial five-year commitment she thought God called her to, but “God will not let me.” For Lloyd, “Keeping them going is what keeps me going.”

MIRAKLE SOLUTION, a janitorial services business based in Lakeland, Fla., and operated by Jenelle and O’ron Harris, also emphasizes hiring workers from troubled backgrounds. “We do understand the need to help those who aren’t given a second chance,” says O’ron, who was in prison himself when his wife got the business started. Thanks to her foresight, O’ron had opportunities upon his 2015 release that many don’t. But memories of those he left behind bars drove him forward: “I was laser-focused. I wasn’t going to forget any of them,” says Harris. He promised them, “I’m going to hire guys like us.”

Beyond providing for their family, MiraKle Solution is “primarily … about hiring ex-cons as well as the homeless,” says O’ron. Applicants often find the firm through social media, but Harris also keeps his eyes open for potential workers anywhere. Recently, having just won a new cleaning contract, he approached a group of homeless individuals in a nearby park and asked if anyone was interested in an opportunity. One man captured Harris’ attention with his enthusiasm: “He was serious, he was intense. … For me, it’s all about the passion, the ambition.” 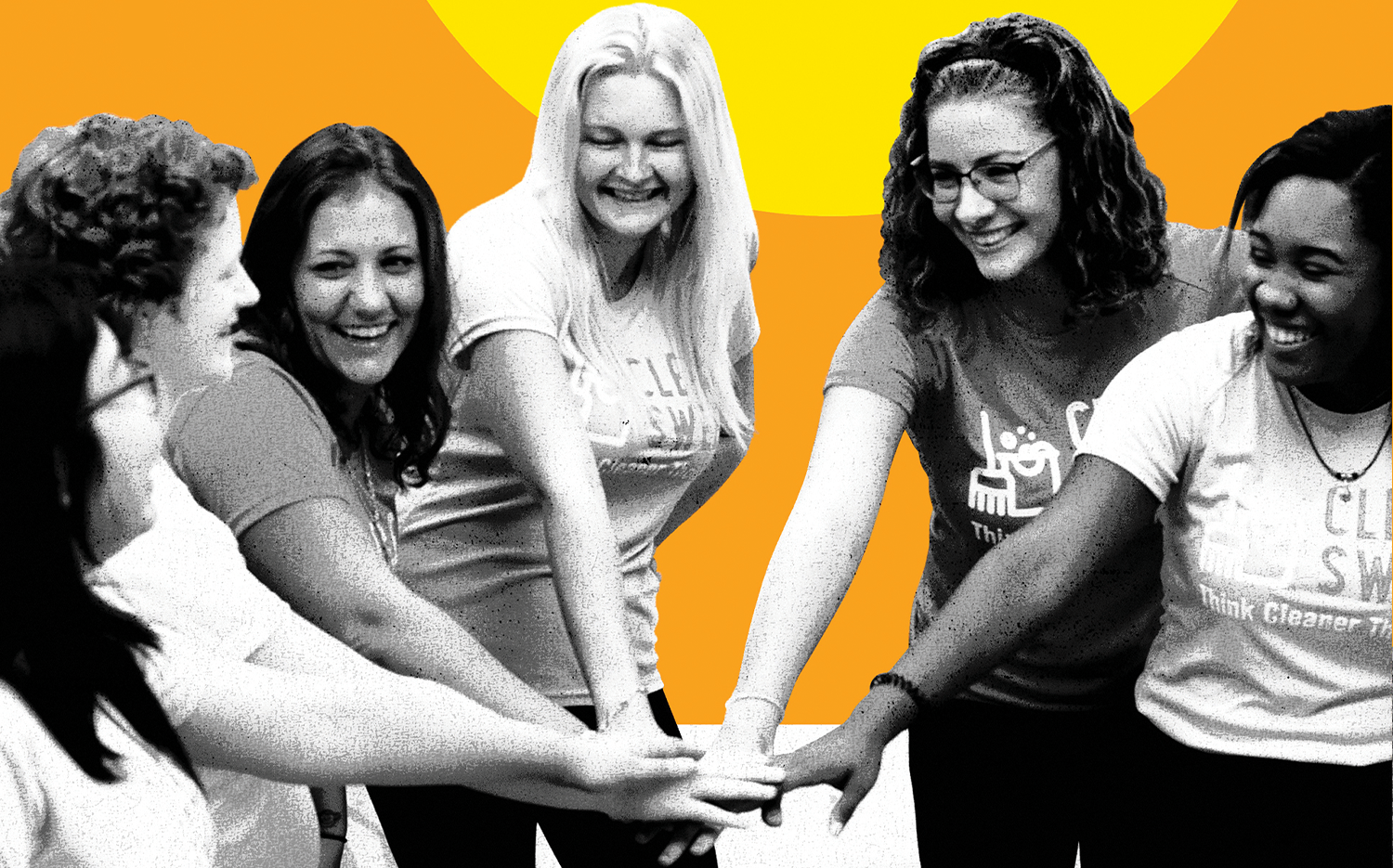 Like Lloyd, Harris acknowledges not all individuals are ready for success. He once bragged to others about one woman’s progress only to have to let her go after a setback. Another time he hired workers based on a friend’s recommendation then lost a $5,000 contract in three days because of their irresponsibility. He learned that taking another’s word isn’t enough: “I have to evaluate the people myself.”

Harris runs background checks, but only on individuals who don’t come through referrals from a program like House of Hope. If the worker claimed to have a clean background but something pops up, it’s still “not a deal-breaker,” Harris says, since he’s “been through it.” He follows up with a candid conversation. The motivation to prove themselves trustworthy will typically be a positive attribute, Harris believes: “Ex-convicts have more to lose than the normal person, so they’re going to go harder. When you have something to lose, you have something to gain.”

MICHELLE HILL, the former payroll clerk, says much the same. She’s determined to prove herself to employers: “You’re not going to be sorry you hired me.”

Hill is grateful for her current job, but she hopes for an opportunity to work again in payroll processing, a job she enjoyed and found meaningful. While filling out applications, she’s trusting God’s sovereignty: “He can restore my life. … It may not ever look like it did, but I know He has a good plan for me.”

Hiring workers with criminal backgrounds still isn’t something most businesses are comfortable discussing. Those like Clean Sweep and MiraKle Solution, whose owners embrace a social mission, are the exception. I was unable to get any larger enterprises, even those considered “background friendly,” to respond to requests to discuss their experiences in giving second chances to such employees. Several, however, have automated “Chat” functions on their website for job seekers, so to mirror the experience of a potential applicant with background-related concerns, I asked a few questions.

The responses were relatively noncommittal and repetitive, and it’s easy to see how they would leave such an applicant feeling discouraged and uncertain. Here, for example, was my exchange with the automated job seeker chat function for Aramark, a food service firm that recently hired a House of Hope resident:

Does Aramark do background checks on workers? “Aramark is committed to the safety and security of its associates, clients and customers. Consistent with this commitment, Aramark conducts employment-related background checks.”

What if a job applicant has a criminal record? “Aramark is an equal opportunity employer. All qualified applicants will receive consideration for employment.”

Does it matter what the conviction is for? “Aramark is committed to the safety and security of its associates, clients and customers. Consistent with this commitment, Aramark conducts employment-­related background checks.” —L.S.