Ashley Bonk was wasted when she entered East County Transitional Living Center (ECTLC). She was so drunk she couldn’t climb onto the bunk bed. She awoke the next morning with a pounding head and utter confusion.

It was Bonk’s fifth time at the transitional homeless shelter within the past eight years. She was a 17-year-old meth addict when a friend told her about ECTLC. She lasted two months the first time before she left in search of drugs. For the next two years, she slept by a dumpster in a park, selling stolen goods to fund her addiction. The second time at ECTLC, she had a newborn son and was determined to be a good mother. She stayed 28 days. The third time she came back, she left the program three weeks short of graduating, this time chasing a man. The fourth time, she managed to graduate from the program, went back to live with her mother and son, then relapsed.

Eight years and four attempts at recovery later, she was back at ECTLC in January 2021—inebriated, penniless, and hopeless. She had done time in jail for child endangerment and hitting a police officer. She had lost custody of her son. Her mother was no longer speaking to her. She was only 25, but she couldn’t envision her life without drugs, homelessness, and pain. The friend who had introduced her to ECTLC had died from a drug overdose. Bonk felt so ashamed that she tried to hide whenever she saw the staff members. But they met her with warmth and smiles—and grace.

This time, Bonk told me three months into the program, things are different. “Something’s changed,” she declared, eyes shining. “It’s not the same as last time. This time, it’s for real.” The last four times, she said, she followed the program with the goal to stop using drugs—a worthy goal, but it wasn’t enough to set her free. This time, “I’m actually on my knees and surrendering everything to Him.” It wasn’t her vices or homelessness from which she needed liberation—it was herself.

ECTLC, based in El Cajon, Calif., emphasizes that change doesn’t come through a program but through the gospel of Jesus Christ. That’s why all the single men and women go through a 90-day first phase (out of four phases) at a remote location. For the first 30 days, all they do is eat, sleep, pray, and read the Bible. Those who stay eventually transition into ECTLC’s other phases that help them build skills and find work. But the program’s emphasis is God’s control over residents’ lives. 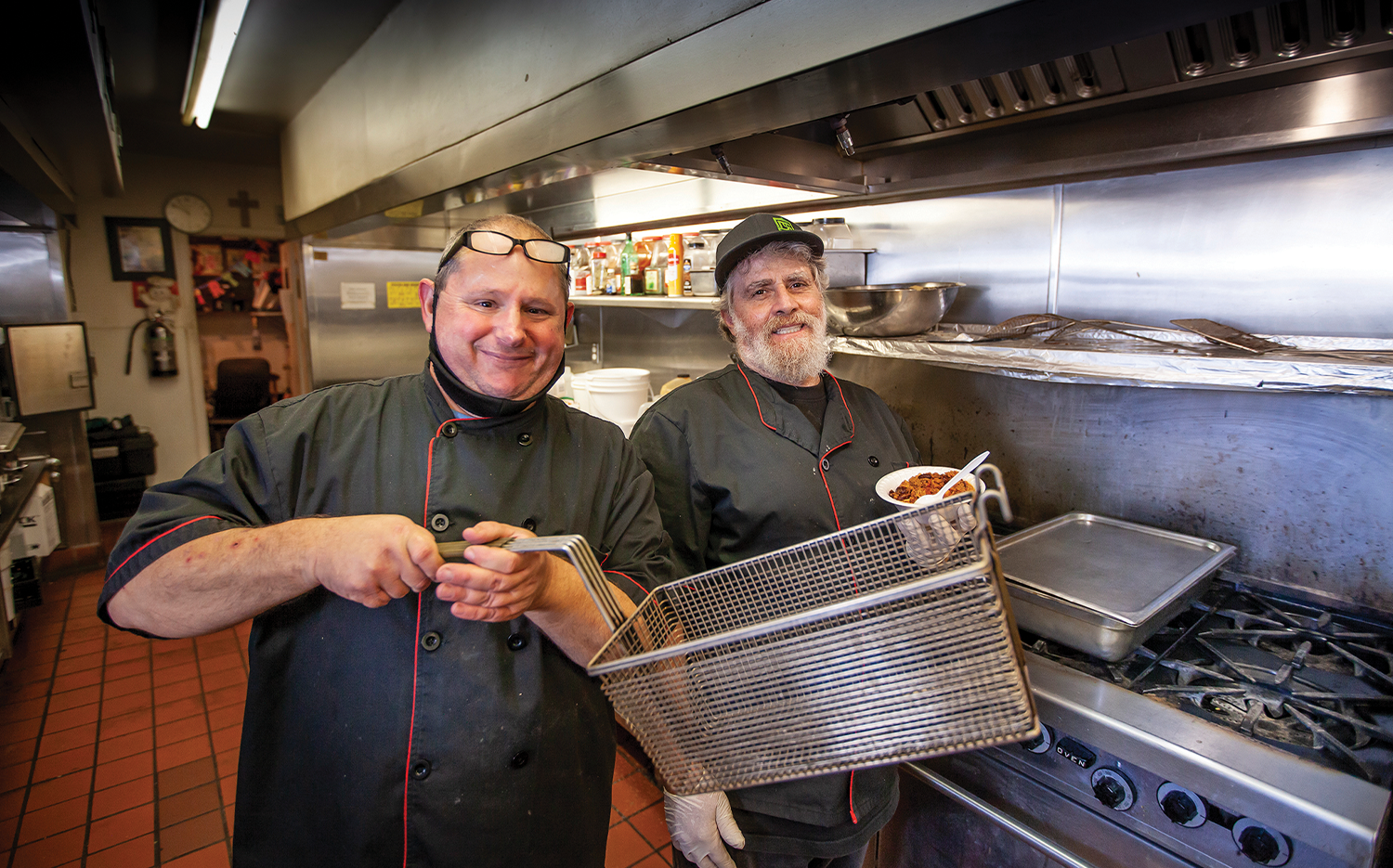 THE MEN STAY at a 12-acre ranch in rural Dulzura, and the women stay at a 10-bedroom house in another rural community the ministry doesn’t disclose for the women’s safety. The goal is a total detox—away from the temptations and distractions of drugs, alcohol, toxic relationships, and the chaos of modern life. CEO Harold Brown equated it to Moses delivering the Israelites out of Egypt into the desert and wandering there for 40 years before entering the Promised Land. It’s a period of spiritual, mental, and physical purification, which also weeds out those who aren’t ready: About half leave ECTLC at that time (though many, like Bonk, come back). It’s supposed to be hard, Brown said: “If you make it too easy, then you don’t accomplish the crucifixion of human nature.”

ECTLC targets those who have reached the lowest point in their lives. Almost every staff member at ECTLC was once where Bonk was: hopeless but not broken enough, until they were. Brown was a 30-year-old addict with 121 felony charges when he landed at a rescue mission and refused to leave. He realized that if he walked out the door, he would die. Director of the women’s training center Diane Wheeler was homeless for 12 years, selling her body to inject heroin into her arm, until she came to ECTLC with the realization that “this is my last hope.” Director of discipleship Jonathan Heuberger was a 36-year-old, five-time felon who had passed through multiple rehab programs when he finally broke into full-blown bawling and said, “I’m tired. I can’t do this anymore.”

You’ve got to be willing to die to self, Heuberger tells incoming residents (ECTLC calls them “disciples”): “You can’t continue to be yourself. You can’t take a new patch and sew it onto an old garment.” When a man returning to ECTLC for the third time told Heuberger his goal was sobriety, Heuberger shook his head: “If you just want to get sober, you can join a program and find a sponsor.” But in Christ, you’re a new creation, he said: “You’re no longer existing. You’re living.” 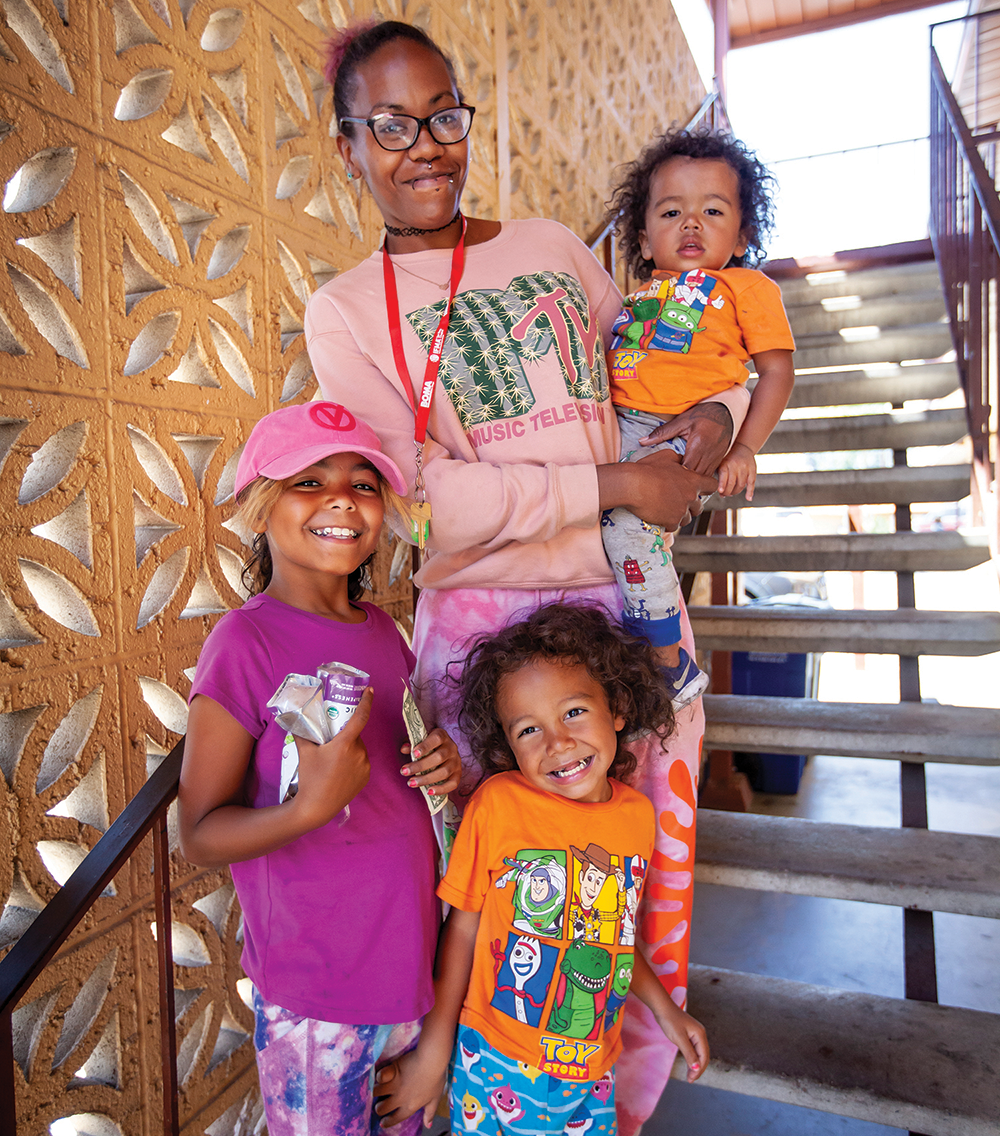 ECTLC’S BEGINNINGS go back to August 2003 at a seedy truck-stop motel that was once a hub for prostitution and drug dealing. A local businessman bought the property to find a more permanent solution for the burgeoning homeless encampments on the streets. That day, a group of local Christians shook hands on the motel parking lot saying, “Let’s get a bunch of people saved and baptized!” Since then they’ve baptized about 6,000 people in the motel swimming pool.

Much of the basic structure of the former property remains: The faded “Fabulous 7 Motel” sign is still up and visible from the freeway. At first, the program only accepted single men and simultaneously continued to operate as a motel. A year later, it began accepting single women, then families in 2005, many who were already renting rooms at the motel. The building’s 101 rooms fit about five people per room (six for families). Through private donor funds, ECTLC is currently constructing two separate buildings to house single men and women and will remodel the motel to fit about 50 more families. ECTLC is one of the few shelters in the area that accepts two-parent and single-father households (in addition to single-mother households), and its family program always has a waitlist of about 100 families.

Originally, the plan was to rent out some motel rooms to create a self-sufficient revenue stream, but that meant outsiders who use drugs and alcohol were still commingling with people struggling to stay sober. ECTLC also hit legal troubles for operating as both a for-profit and nonprofit.

In 2009, ECTLC became a nonprofit entity. To find another revenue source, it bought the Aunt Emma’s Pancakes building next door and tried running it as a restaurant and work training center. But Aunt Emma’s went out of business for a reason—it was in a bad location with too few customers. (Today, the former pancake house is a cafeteria, chapel, and kids’ center.)

Shuttering Aunt Emma’s created not only a revenue problem but a mission dilemma. After living and working 11 years at a rescue mission, Brown knew many homeless shelters don’t sufficiently prepare residents to find work and stay employed in the real world. Education is also an issue: About half of ECTLC’s “disciples” never graduated from high school, so ECTLC also offers GED classes. Another big obstacle is the lack of confidence and work ethic, said Brown: “You’re defeated. You’re not ready to be a good employee somewhere, and you just fail. And that’ll be another thing in a long line of failures.”

So ECTLC used the relationships it had built with the city of El Cajon and other local businesses to create “work therapy” opportunities for disciples: concession stands at the baseball stadium, vegetation management (clearing brush and trimming palm trees), cleaning up freeways and sidewalks, meatpacking for a local company.

Now, after the first 30 days of detox at ECTLC, the single men and women ease into work responsibilities. (The family program is different: Families have different needs, and each family works with case managers to develop an individualized plan.) Disciples start by helping out at the main property: greeting visitors at the front door, cooking in the kitchen, or doing basic maintenance. In the second and third phases (each about 90 days), they work for four hours a day in one of the work therapy sites.

During the fourth phase, which also lasts 90 days, ECTLC works with each disciple to find full-time employment. Disciples can spend a third of their income, but must save a third for when they graduate, and pay the final third to ECTLC, which uses the revenue to offset costs of the first three phases. 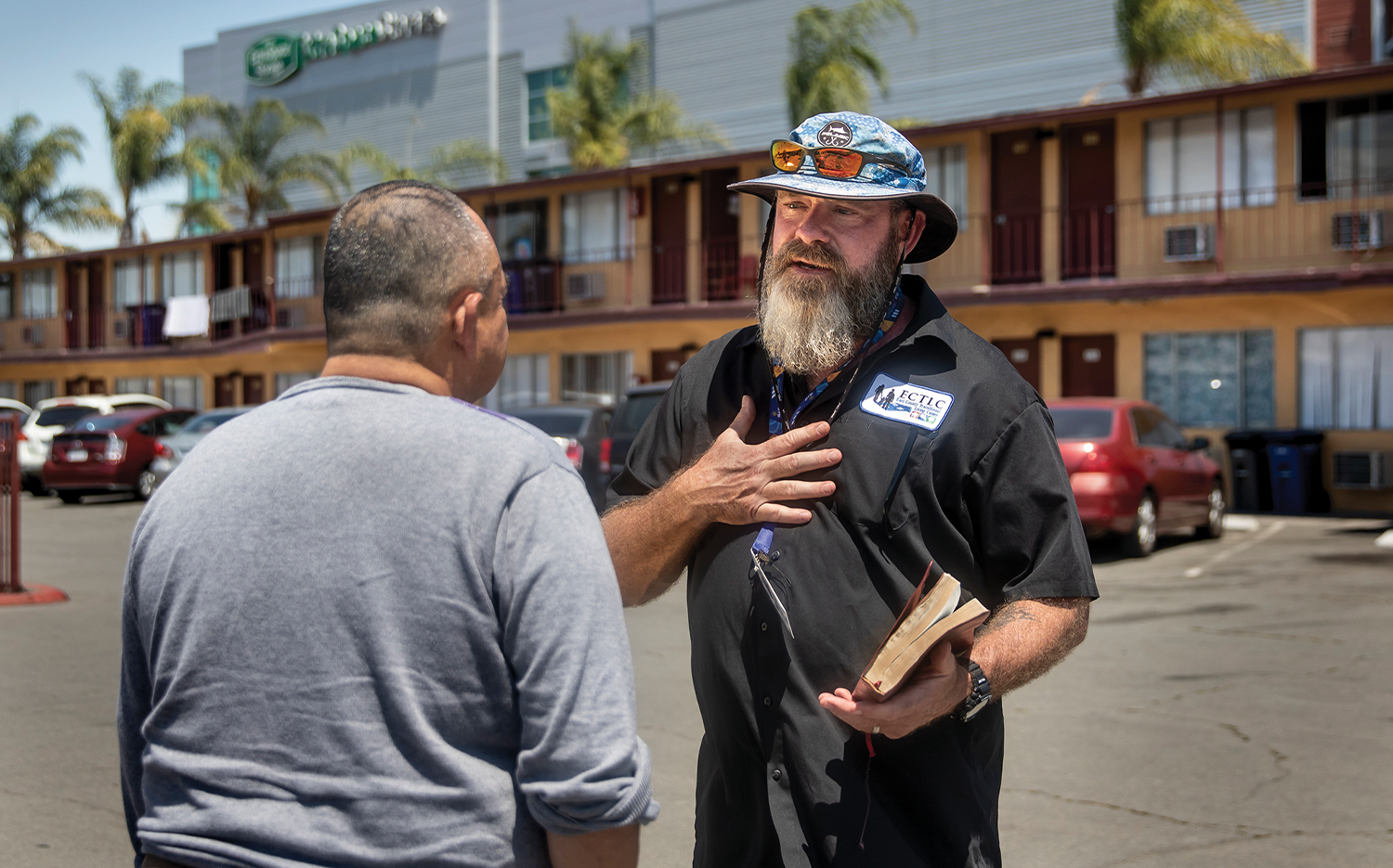 THOUGH THE PROGRAMS are a year long, some residents choose to stay longer. When I met Joey Aleman, 38, he was still living at ECTLC and doing work therapy, even though he had already graduated more than three months before. “I’m very happy where I’m at,” he said. That’s a common challenge at ECTLC: Some people build a level of comfort in the structured environment. Some don’t trust themselves to abstain from substances yet. Many come from trauma, and ECTLC is the only family and safe space they know.

Aleman watched his best friend shoot himself in the head. He also remembers being shot himself a different time, a bullet ripping through his liver, small intestine, and colon. He used to flail awake in bed from night terrors. Those nightmares stopped while he was at ECTLC. Here, he feels close to God. Here, people treat him with kindness. Here, he knows what to expect. Sometimes people need a bit more time to heal and prepare to step out on their own, and ECTLC leaves room for that.

That’s where Ashley Bonk is now. She’s still working through the trauma of losing her father three days after she first met him. At 16, she began using meth to numb her pain and depression. Now she’s learning to grieve with God. She has reconciled with her mother and son, and they join her for service at the chapel every Sunday.

Proverbs 3:5-6 is a common Scripture at ECTLC. Aleman quoted it by heart, and so did Bonk: “Trust in the Lord with all your heart, and do not lean on your own understanding. In all your ways acknowledge him, and he will make straight your paths.” Bonk said that’s now her life verse: “Because my will is trash … I’m letting go and letting God work in my life.”