American pastor jailed in Turkey makes a daring plea to the Trump administration: ‘Please do not leave me here in prison’

Friday, April 7, passed for Andrew Brunson like most of the other 25 Fridays since the American pastor was detained in Turkey six months ago as a “threat to national security.”

Back in October, Brunson, who has lived in Turkey for 23 years, thought he was finally receiving permanent resident status when authorities summoned him to government offices in Izmir. Instead, Ministry of Interior officials detained him for weeks that now have stretched into months—all without offering evidence of the charges against him.

Brunson’s case took a notable turn late in March after U.S. Secretary of State Rex Tillerson, in his first official visit to Turkey, met with Brunson’s wife in Ankara and reportedly discussed the case with Turkish President Recep Tayyip Erdogan.

But the length of Brunson’s detention—plus the severity of the pending charges—has church leaders worried about the long-term impact of the case. Brunson’s six-month anniversary also coincides with the start of voting on a nationwide referendum that, if successful, drastically will expand executive power for Erdogan and could lead to further crackdowns on individual, religious, and political freedoms in Turkey, a democracy and NATO member state since 1951.

Several Americans have been deported from the country under a state of emergency following a failed coup last July (see “Caught in a dragnet,” Feb. 4), but Brunson is the only American jailed under the emergency measures. A missionary in Turkey for two decades who with his wife reared three children in the country, he seems an unlikely scapegoat in Turkey’s internal turmoil.

At the time of his arrest, Brunson was serving as pastor of Izmir Resurrection Church and had helped establish a ministry to refugees. Authorities held him for two months without formal charges before a judge last December charged him with “membership in an armed terrorist organization.” The judge has presented no evidence in court or to attorneys to support the charges.

For Brunson months of incarceration in 4 Nolu T Tipi Prison, a forbidding complex on the outskirts of Izmir, came to what many hope could be the beginning of a breakthrough on March 28. That day officials at the U.S. Embassy met him in prison and agreed to release a statement on his behalf.

In it Brunson challenged Turkish and American officials, asking, “Will the Turkish government face no consequence for stubbornly continuing to hold an American citizen as a political prisoner?”

Brunson’s statement continued: “I plead with my government—with the Trump Administration—to fight for me. I ask the State Department to impose sanctions. I appeal to President Trump: Please help me. Let the Turkish government know that you will not cooperate with them in any way until they release me. Please do not leave me here in prison.”

The pastor’s “fight for me” plea became a rallying cry for his supporters worldwide. A petition for his freedom—launched by the American Center for Law and Justice (ACLJ), a Washington-based legal advocacy organization representing him—gained further attention, nearing 250,000 signatures. Brunson’s wife Norine flew to Ankara in anticipation of the Tillerson visit one day before his arrival.

Norine Brunson, herself detained for two weeks with her husband last October before Turkish officials released her, has remained in Izmir to support her husband. Authorities denied her requests to visit Brunson until Dec. 28, when she saw him at the prison, where she learned he had not received letters she’d sent (and that he had assumed she’d been deported). Turkish officials have continued to allow her to visit him periodically, with monitoring, but each time she must petition the government in Ankara for permission.

During one such visit on March 27, Brunson told his wife “he felt the Lord had said I would meet Sec of State Tillerson,” Norine wrote on Facebook. The next day, U.S. officials told her no such meeting would take place. She traveled to Ankara anyway, she wrote, “just in case the Lord opens something up.”

Tillerson arrived in Ankara on March 30. Without specifying how it came about, Norine told supporters she was permitted to meet with the secretary of state, a conversation she said lasted 20 minutes. Tillerson indicated he had spoken with Erdogan about the case and said “an indictment” could be handed down soon in the case, but could not elaborate.

“I do not know what will come of it, considering the sensitive period Turkey is in, but was grateful for the opportunity,” Norine wrote on Facebook.

As in the United States, an indictment would spell out the legal charges against the accused, and perhaps shed light on a case that has appeared to stagnate for six months under a curtain of seeming injustice.

At a joint press conference with Tillerson and his Turkish counterpart, journalists questioned Turkish Foreign Minister Mevlüt Çavuşoğlu about Brunson. Çavuşoğlu told reporters the court will decide Brunson’s case “after the prosecutor completes the indictment” and said charges against Brunson weren’t initiated by the judiciary or the police, “but upon a complaint from his own translator”—the first time such details about the case had been made public. 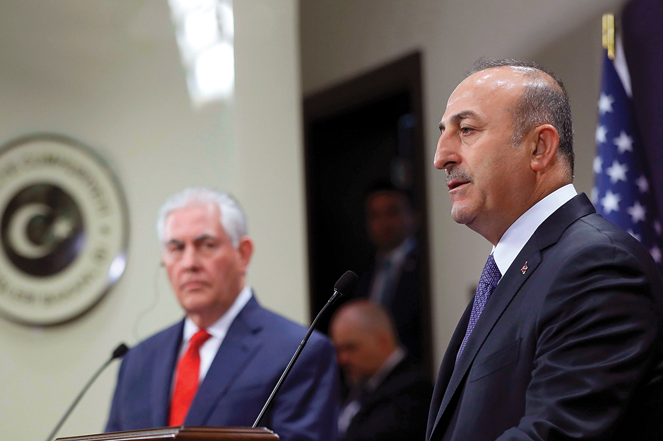 Tillerson and Çavuşoğlu at a press conference in Ankara. Adem Altan/AFP/Getty Images

Çavuşoğlu stated: “During this process, we have assisted him in accessing the consulate, meeting his family, private talks with his wife, and providing books that he wanted, including the Bible. We will continue to do so. The court will make a decision on him after the prosecutor completes the indictment. It is not a process that the judiciary and the police initiated themselves, but upon a complaint from his own translator. We are also waiting for the judiciary to make a decision immediately. This is not a political process, nor is it a step against the U.S.”

For his part, Tillerson “wanted to make sure he met with Mrs. Brunson to share the most recent information he had on Pastor Brunson’s case,” an unidentified State Department official told the Reuters news service. “The secretary committed to staying in touch with Mrs. Brunson regarding the case moving forward,” the official said.

The day after the joint press conference and Tillerson’s meeting with Brunson’s wife, at least seven Turkish news outlets, including the patrician English-language Hürriyet Daily News, carried stories about the case.

“I think this is a good step in the right direction,” said Aykan Erdemir, a former member of the Turkish Parliament and now senior fellow at the Foundation for Defense of Democracies in Washington. Erdogan has released some journalists and others who have been jailed for months in the run-up to this month’s referendum, Erdemir said: “This really is the right time to pressure Ankara.”

Asked what it might take to secure Brunson’s release, the former opposition politician said: “There should be no carrot! It is clear that a U.S. pastor is framed and imprisoned on bogus charges, and with little or no due process, and this is embarrassing for Turkey, a NATO ally. Ankara should release Pastor Brunson, not because it will get something in return, but to save itself from embarrassment.”

ANOTHER ANALYST IN TURKEY, who is not identified due to the ongoing threats to security for those making public statements, said, “At this point both local and expat Christians remain unsure how this case is going to impact the church here, short- or long-term.”

Erdogan has sought to increase his authority and silence perceived opponents since facing down a coup attempt last summer. The president blamed the attempted ouster on a movement started by onetime ally Fethullah Gülen, a Muslim leader living in self-imposed exile in rural Pennsylvania. Erdogan declared a state of emergency following the coup attempt, and his regime subsequently has arrested tens of thousands of civilians—including teachers, police, public officials, and religious leaders.

Adding to the pressure to restrict freedoms: the war next door in Syria, where Turkey has taken an active military role plus a hard line publicly against ISIS, or Islamic State. Nearly 3 million Syrian refugees currently reside in Turkey.

The Pentagon angered the Erdogan government a month ago when it sent additional troops to Syria-Turkey border areas to train and serve alongside the Syrian Democratic Forces (SDF), a Kurdish-led rebel coalition Erdogan opposes. Despite the serious strains, Tillerson reiterated a strong U.S.-Turkey relationship, saying “there is no space” between Turkey and the United States in a mutual commitment to defeat ISIS.

Protests and propaganda were ramping up ahead of the April 16 referendum, which promises to drastically expand the powers of the presidency and end Turkey’s parliamentary system. Under it, the president—not Parliament—would appoint Cabinet ministers and the president would appoint two-thirds of the country’s senior judges. The president could pass certain laws by decree and use a state of emergency to dissolve Parliament. With opponents referring to the measure as “democide,” Erdogan has banked on international voting among a large Turkish diaspora, where early balloting began outside Turkey April 5. In the Netherlands, for example, 250,000 dual citizens of Turkish descent are eligible to vote, but Dutch and German officials have been vocal in opposing the referendum.

While the government’s future remains uncertain and Brunson continues in prison, his church faces a deadline: The landlord for the rented space in Izmir, nervous over the high-profile case, has asked the congregation to vacate the building by the end of April. Norine Brunson and others, in turn, have launched a campaign (including a GoFundMe web page) to purchase the building so the congregation may use it permanently.

The church’s current location, say congregants, is ideal, a two-story yellow building fronting a central street with many pedestrians and easy access to mass transit. Resurrection, or Dirilis in Turkish, keeps its gate and shutters open, with New Testaments and other literature waiting in shelves that sit on two open window ledges. The church gives away hundreds of volumes this way, and passersby also often stop in for conversation or prayer.

Brunson is ordained in the Evangelical Presbyterian Church (EPC), and the couple serves with Partners In Harvest. Church officers I contacted about the case, including EPC stated clerk Jeff Jeremiah, referred questions to ACLJ. Last month the advocacy group called for the U.S. government to “take a more active role in fighting for Pastor Andrew’s release.” In a statement released April 7—the six-month anniversary of Brunson’s imprisonment—senior counsel CeCe Heil called for continued public pressure, as Brunson lives on in a Turkish prison cell built for eight that at times has held 22 prisoners, all Muslims. 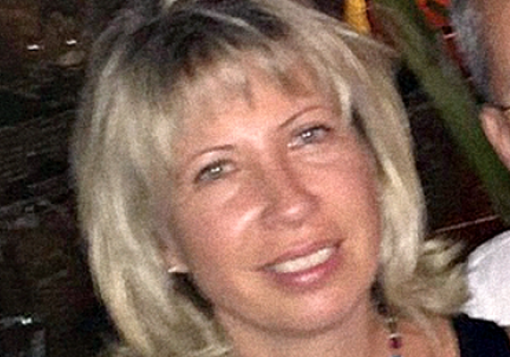 Dec. 9, 2016: In Andrew Brunson’s first court appearance, judge orders him imprisoned on charges of “membership in an armed terrorist organization” 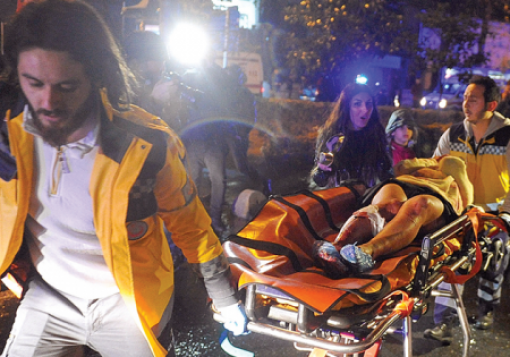 Feb. 11, 2017: Uzbek national Abdulkadir Masharipov, arraigned in the Istanbul nightclub massacre, testifies before a Turkish court: “My purpose was to kill Christians” 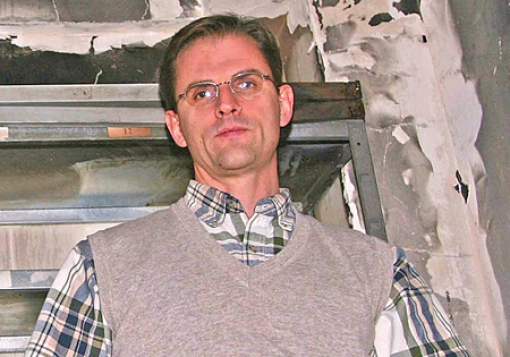