Festival or tragedy: The Portland protests

I’m trying to get to the heart of what’s happening in Portland—60-plus straight nights of downtown demonstrations—and is apparently spreading to other cities. How violent are they? What do protesters want and when do they want it? What’s the endgame? Here’s what I’ve put together based on stories filed by two journalists—WORLD correspondent Andrew Shaughnessy with the protesters, Mike Balsano of the Associated Press with the federal agents—and my own experience.

As night fell on Friday, July 24, thousands of protesters focused their attention on the Mark O. Hatfield Federal Courthouse in downtown Portland, Ore. It has large windows and a white marble interior, but thick plywood now covered its outside, with narrow slits at the top giving the dozens of federal agents inside an opening through which to fire pepper balls.

Garbage and paint splatters covered the steps leading to the courthouse and the terrace outside the front door. Demonstrators regularly shook the black fence now keeping them away from the courthouse’s graffiti-covered walls. A Joshua might say, “There is a noise of war out there.” But a Moses might respond, “It is not the sound of victory or defeat, but the sound of singing.”

Yes, early in the evening some of the protesters blasted music from speakers on their shoulders, played trumpets, and beat drums. Some sang, danced, and batted around beachballs. Smoke poured from the “Riot Ribs” tent where cooks manned grills and handed out racks of barbecued ribs. On the fringes, the smell of cigarettes and marijuana drifted through the air.

A couple walked by, holding hands and discussing the appropriate time to change a gas mask filter. Shaughnessy spoke with another couple, the Perlbergs, who were having what Ashley Perlberg called a “date night. … If we don’t raise anti-racist kids, then I haven’t done my job.” She said, “Our system [needs to] be torn down and rebuilt. … We need to change the government.”

In the Mark O. Hatfield Federal Courthouse, the mood was grim. One federal agent told Balsano, “It’s scary. You open those doors out, when the crowd is shaking the fence, and ... on the other side of that fence are people that want to kill you because of the job we chose to do and what we represent.”

Before 11 p.m. that might have seemed like paranoia. Then the noise of war began to dominate. Some protesters threw commercial-grade fireworks over the fence, injuring five federal agents. Many of the protesters cheered the huge booms and explosions of red, white, and green. Some aimed at the agents’ eyes lasers that can cause permanent blindness. Others threw frozen water bottles, rocks, cans of beans, and eggs.

Then came the federal response. Federal agents hurled tear gas canisters and flash-bang grenades into the crowd. Soon the billowing clouds of gas drifted down the street and protesters started to cough and choke. They gasped for breath and felt like they were drowning. As some protesters retreated and retched on the sidewalk, others ran forward, some with motorcycle body armor and gas masks on, holding in front of themselves umbrellas, sleds, and homemade plywood shields. 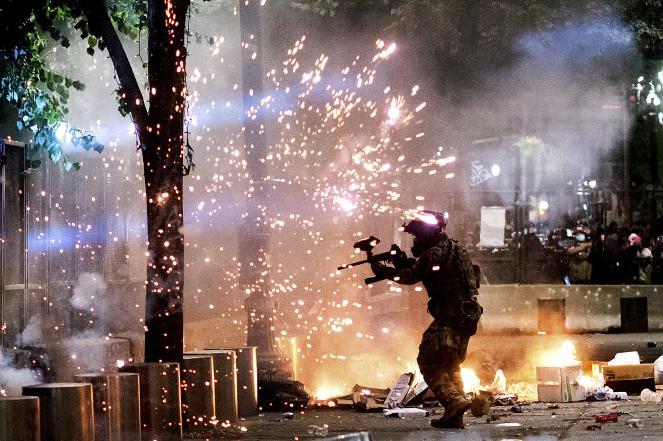 What do the protesters want? Many spoke of peace. One high-school English teacher, Ashley Mountain, said, “I’m here to support Black Lives Matter, to help defund the police, and help get the feds out of Portland, Ore. … I work with youth … I don’t think I can stand in front of them and talk to them about being good citizens and participating in their society if I don’t lead as an example.” Others snorted violence. Graffiti on the courthouse walls included “Kill pigs.”

The mixture of music and melee was enticing for some, but serious injuries lurk. One firework on July 24 exploded with a boom next to a federal agent, deadening his hearing and leaving gouges and burns on his arms. A projectile apparently shot by a federal agent on July 12 left a protester with a fractured skull.

If protests spread around the country, those severe injuries are likely to be only the first fruits of conflict. Fifty years ago, on May 1, 1970, I was on the New Haven Green as protesters confronted National Guard troops. Yippie leader Abbie Hoffman was there: On a pretty spring night it seemed like fun and games. Beat poet Allen Ginsburg was there: As tear gas swirled, he sat on a sidewalk chanting Om Om Om.

On the night of July 24, 2020, an agent at the Mark O. Hatfield Federal Courthouse told Balsano, “I can’t walk outside without being in fear for my life.” Fear can kill. Three days after the New Haven demonstration where soldiers didn’t shoot, some did at Kent State University. Four young people died. 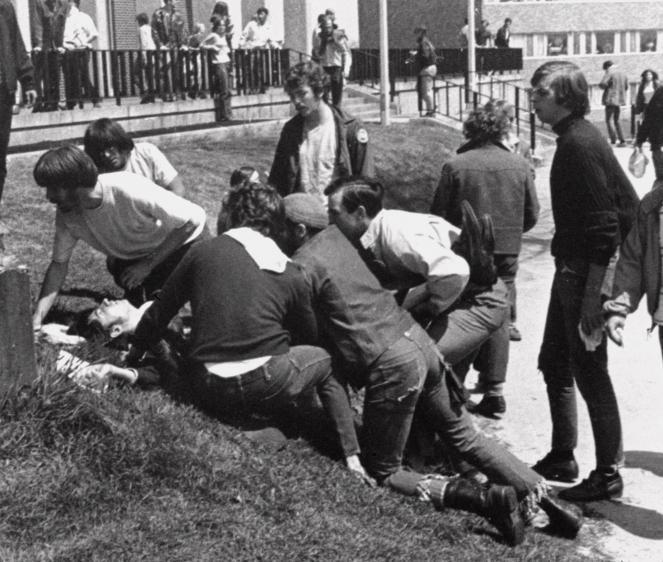 A Kent State University student lies on the ground after National Guardsman fired into a crowd of demonstrators on May 4, 1970 in Kent, Ohio. Associated Press

Two of Portland’s black leaders spoke at a July 20 press conference about the endgame they saw. Daryl Turner, president of the Portland Police Association, said: “This is no longer about George Floyd, racial equity, social justice reform, or the evolution of policing. This is about violence, rioting and destruction.” J.W. Matt Hennessee, pastor of the Vancouver Avenue First Baptist Church, told protesters: “We love you as God’s children, but we don’t like what you are doing. Tell us where to meet you so we can have a conversation about how to work together for solutions. Take Portland off the front page of newspapers around the world.”

Their words reminded me of the first U.S. senator I ever interviewed: Mark O. Hatfield, in 1971. I was a beginning reporter in Oregon, not yet a Christian. He was, and staunchly pro-life. Hatfield gave me a book he wrote, Conflict and Conscience, that ends with a prayer he offered, at Richard Nixon’s request, during a White House service on July 20, 1969, the day astronauts Neil Armstrong and Buzz Aldrin walked on the moon.

Hatfield prayed for the astronauts and then said, “O God, grant us deliverance from the rhetoric of peace when we personally are not willing to do the things which make for peace.” He prayed for wisdom and concluded with the definition of wisdom in James 3:17—“peaceable, gentle, open to reason, full of mercy.”