The Abraham Hostel, like most lodgings near the Tel Aviv waterfront, was gearing up to welcome international tourists back to Israel later this month when violence erupted between Israeli forces and Palestinians over the past week.

“We had rockets all day yesterday and into the middle of the night,” said front-desk receptionist Rachel, reached by phone Wednesday. “We spent one hour in the bomb shelter last night.”

Hostel director Uri Sharon confirmed that guests and staff are spending sleepless nights this week as Israel enters a sixth day of escalating conflict with Hamas militants controlling Gaza.  Meanwhile, tens of thousands of Palestinians  have taken to streets across the country to protest evictions in East Jerusalem. Israelis are accustomed to monitoring their security, and Sharon said guidelines are clear on protecting guests using basement bomb shelters. “But our cities are tense and we are afraid of escalation just as we are enjoying a return to normal life.”

Militants have fired more than 1,200 rockets from Gaza since the start of widespread fighting on Monday. Israel Defense Forces (IDF) says the Iron Dome missile defense system has intercepted about 90 percent of the missiles, but casualties are mounting.

Late Wednesday Hamas said it fired 130 rockets into Israel. A 5-year-old boy  in Sderot died after shrapnel made it through the fortified room where he and his mother  took shelter. She was critically injured. The rocket strikes have killed at least seven and injured at least 100 civilians this week, say health officials. At least one IDF soldier died when a missile hit his vehicle. Authorities ordered all residents in central and southern Israel into bomb shelters and have closed schools in southern Israel near Gaza.

Tel Aviv’s Ben Gurion International Airport, the country’s only reliable link to the outside world, has been closed intermittently due to rocket fire. The aerial bombardments have lit up both the skies above the country’s largest city and the cell phones of Israeli citizens, who receive red alerts each time a rocket launch is detected. On Wednesday rocket sirens blared again across southern Israel near the Gaza Strip and recommenced in Tel Aviv at nightfall.

A clash that began in Jerusalem’s Old City has spread rapidly throughout the country. In the Jewish-Arab town of Lod on the outskirts of Tel Aviv, Arab protesters torched a synagogue and cars lining the street. Two Jews have been arrested in the shooting of an Arab resident, and police announced a curfew as fighting continued. In the early morning hours Wednesday, rocket fire killed a man and his daughter outside Lod.

U.S. envoy Hady Amr is en route to Israel and Secretary of State Antony Blinken spoke Wednesday to his counterpart, Foreign Minister Gabi Ashkenazi, reflecting world leaders’ growing concern. Israel has experienced few conflicts with Palestinians in recent years, and U.S.-led peace agreements reached with Arab nations during the Trump presidency, many believed, would help defuse further tensions. But they have so far failed to reignite direct talks between Israeli and Palestinian leaders.

Blinken in a statement on Wednesday said he was “deeply concerned” and condemned the rocket attacks while also calling on Israel to avoid civilian casualties. U.S. Defense Secretary Lloyd Austin in a statement reaffirmed “ironclad support for Israel’s right to defend itself.”

Israeli fighter jets, responding to rocket launches, have destroyed three high-rise buildings in Gaza the military says housed launchers and commanders of Gaza terror groups. The IDF warned residents before the airstrikes and launched “knock on the roof” strikes first using nonexplosive missiles. The IDF says it has killed six Hamas commanders in the strikes, and 16 Hamas members on Wednesday alone. The Israeli strikes have killed at least 56 civilians in Gaza, according to Reuters, with hundreds reportedly injured. 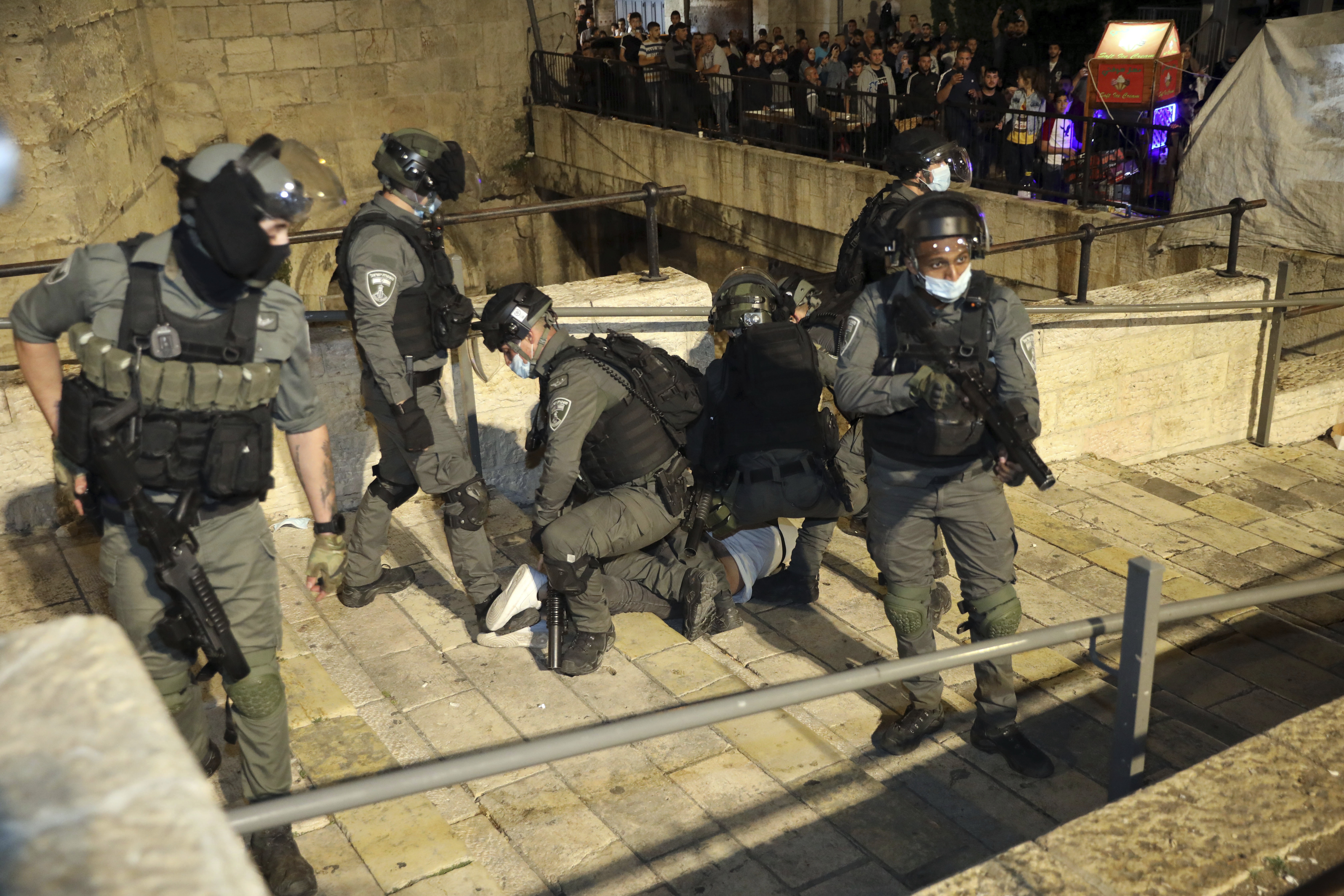 Israeli police forcibly detain a Palestinian outside of the Damascus Gate to the Old City of Jerusalem on Tuesday. AP Photo/Mahmoud Illean

The worst fighting in at least seven years began this month over a long-standing conflict centered in the Sheikh Jarrah neighborhood in East Jerusalem. There, just outside the walls of the Old City near the Damascus Gate, Palestinians have for decades lived in housing ceded to them by Jordanian authorities controlling most of Jerusalem prior to the 1967 Six-Day War. But Israeli courts have ruled Jewish religious associations legally owned the homes before the establishment of Israel in 1948.

In the latest round of litigation, Palestinian families appealed to the Supreme Court after an appeals court decision evicted more than 70 Palestinians currently living in Sheikh Jarrah. That hearing was set for May 10, or Jerusalem Day, a national holiday commemorating the reunification of Jerusalem following the Six-Day War. At the same time, Israeli police in mostly Palestinian East Jerusalem set up barriers to block nightly gatherings that are a feature of Arab Muslim life during Ramadan.

Protests over those actions have in the past month gradually turned to riots and violent skirmishes, even after the Supreme Court delayed hearing the Sheikh Jarrah case. These culminated in Israeli police on May 7 entering and firing rubber bullets and stun grenades inside Al-Aqsa Mosque, located in the Old City on what Jews consider the Temple Mount. For Muslims, Al-Aqsa is the holiest site outside Medina and Mecca, and the clashes represented for them not only a provocation but a desecration.

Ongoing conflict comes at a time when Israel hoped to emerge from COVID-19 restrictions and regain its tourist trade. It leads the world in its rapid rate of vaccinations. Many hotels and guest houses hoped to reopen by the end of the month and expected to begin taking international bookings.

The threat of outright civil war also comes at a time of political crisis. Netanyahu has been unable to form a coalition government since national elections in March. Last week his rival, Yair Lapid, began the task of trying to lead a new government. As the incumbent, Netanyahu still heads what is a transitional government but could face ouster at almost any moment. Militant Palestinians, many believe, have seized on Israel’s political instability.

Bogged down with infighting among Jewish political parties—and the inability of leading parties like Netanyahu’s Likud Party to hold a governing majority—observers say Israeli leaders have ignored rising Islamist extremism in their midst.

Jewish-Arab cities like Lod and Nazareth have seen increased unrest and criminal networks prior to the latest violence. Arab gangs have been fighting among themselves without police intervention, plus attacking Christians and Orthodox Jews. Growing caches of weapons, once used in these local disputes, are now fueling the national unrest.

Hostel director Uri Sharon, like many Israelis, hopes the current crisis subsides once rocket launches and rounds of retaliatory strikes are over. But the unprecedented number of Gaza rockets and armed conflict throughout the country underscore growing concerns about a wider conflict, or full-scale war.