U.S. adoptions in Ukraine come to a halt as Russia invades and orphans flee

A group of children evacuated from an orphanage in Zaporizhzhia, Ukraine, wait to board a bus in Lviv for their transfer to Poland. Kai Pfaffenbach/Reuters/Alamy

On the morning of the Russian invasion of Ukraine, Jennifer Ruff received a frantic video call from her 16-year-old son in eastern Ukraine. “Mama, five! Mama, five!” he said as he showed her the window where he had just witnessed five rockets explode not far from his orphanage. His town was one of the first hit in the early hours of Feb. 24 in what has now become a weeks-long attack on key Ukrainian cities and military outposts.

Ruff said the missile strikes terrified her son, and he began sending texts she describes as unusual for a teenage boy: “Mama, I love you. You mean so much to me. I want you to know how much I love you.”

In the eyes of the Ukrainian court system, Sasha is not yet an official member of the Ruff household, but according to Ruff the family bonds are already strong and he is their son. Shasha spent 10 weeks with the family last summer as they rushed to finish their home study and necessary documents required by Ukraine’s State Department of Adoptions (SDA). When COVID-19 slowed down their process, Sasha returned to the family for four weeks over Christmas.

They let him paint his room black—a sacrifice, Ruff explained with a chuckle, because the rest of their walls are white—and they bought him clothes, a new comforter, and Christmas gifts which he left behind in their Maryland home. They assumed his adoption would be finalized and he would be home by mid-March, but after they traveled to Ukraine to complete round one of their adoption process in the first half of February, Russia invaded, and now the Ruff’s adoption process—along with dozens of other American adoptions—is on hold.

“It’s just really tough. We were so close and we were just there. He was so close to getting home,” Ruff said. 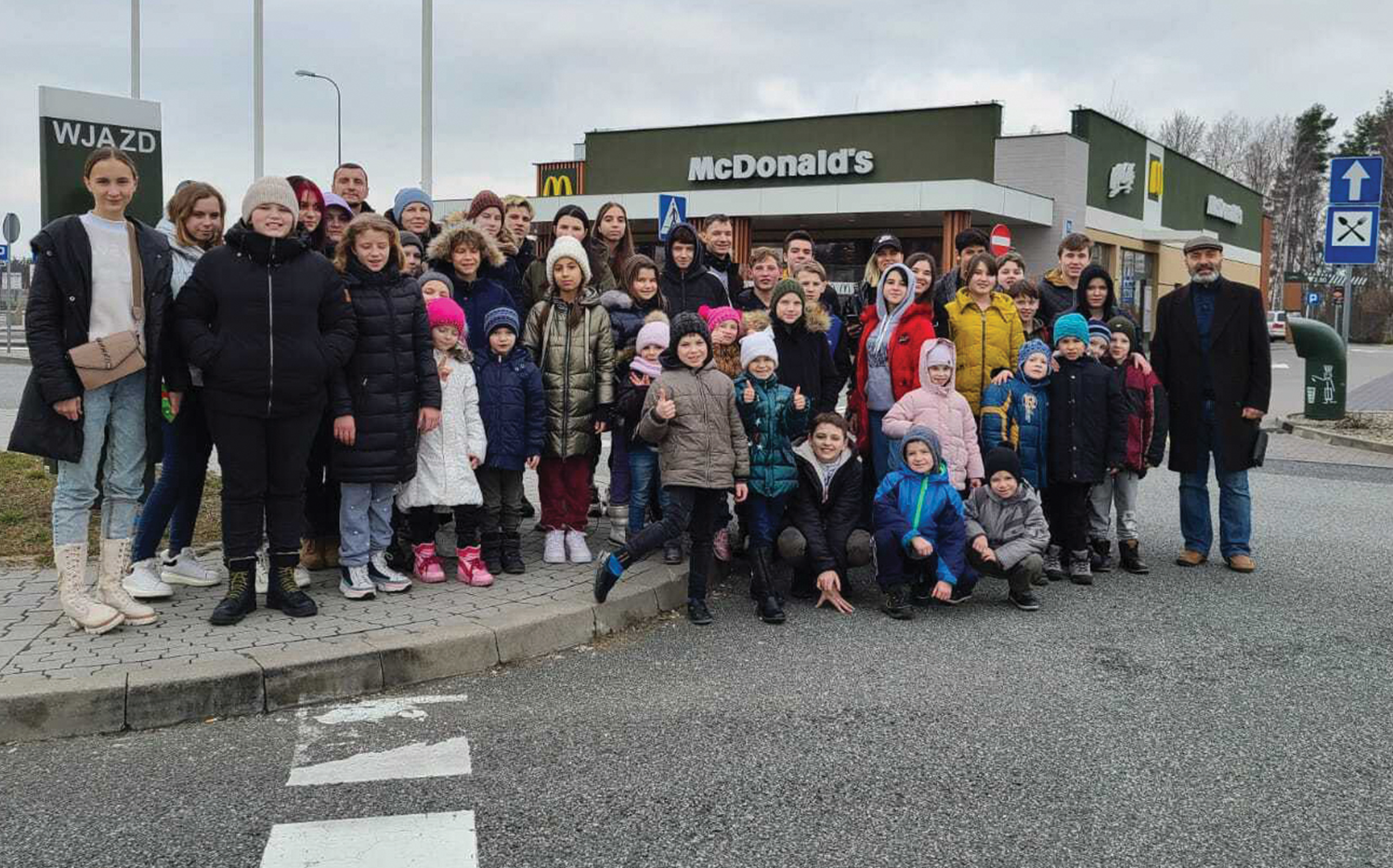 THIS MIRRORS THE HEARTBREAKING STORIES of other adoptive parents now watching videos of Ukrainians fighting Russian armed forces and wondering how their adoption process and the children they love will weather the road ahead. The Ruff’s adoption agency, Nightlight Christian Adoptions, has 11 Ukrainian adoptions in process. “Many of the kids who are matched for adoption with Nightlight families are from Ber­dyansk, which is near Mariupol, which is now under Russian control,” Nightlight president Daniel Nehrbass told me.

Robin Sizemore, executive director and co-founder of Hopscotch Adoptions, said they have five families and six children impacted, all in various stages of the adoption process: “My big picture concern, should Russia prevail, is that [Russian President Vladimir] Putin has banned all Russian children from being adopted by Americans. This is catastrophic to so many families.”

Ukraine has close to 100,000 children in orphanages—one of the highest numbers in Europe—and around 7,000 are officially classified as orphans and eligible for adoption. The rest are considered “social orphans” who have been placed in the system to escape poverty and neglect.

Since the invasion, those connected to the world of Ukrainian adoption, orphanages, and foster care have shifted their attention to the evacuation of children from the active war zone. The Ruff’s hosting agency, Host Orphans Worldwide (HOW), is one group sending a team of people to the region to take part in those efforts. HOW volunteer and spokesperson Jill Krenzer says they are trying to track evacuations for the children in their hosting program as well as other orphans across the country. They recently greeted 720 people, mostly children from 15 orphanages in Odessa, as they crossed the Ukrainian border.

Krenzer could not disclose which country her team is working in due to concerns about child trafficking, but says they are there to process paperwork when the children cross the border. They are worried that some bordering countries might place Ukrainian orphans in their foster care systems.

“[HOW’s team] will try to make sure that those kids are matched up with families who can take care of them and don’t just fall into a system somewhere where we lose track of them, and we may not ever know where they are,” Krenzer said. Most of their children already have passports and visas since they’ve made trips to the United States as part of their hosting program.

Krenzer hosted a boy two years ago and finalized his adoption last March. She and her husband are also considering the adoption of their son’s best friend—they hosted him last winter—and his little brother who has special needs, but now the boys are stuck in southeast Ukraine where Russian troops are shelling civilian areas and have taken over some cities.

“They’ve been through enough trauma in their lives, and then you add all of this. That’s what we’re really trying to avoid by being there for them as they cross the border and making sure that everything is processed correctly,” Krenzer added. “If they go to families that they already know, it’s that much less trauma in their lives versus going to another unknown and being in some foster system somewhere.”

Some orphanage children are trapped in the war zone. As press time, WORLD had confirmation of 51 kids and 7 adults unable to evacuate the Kyiv City Children’s Home in Vorzel. The children survived the bombing of their orphanage but don’t have heat or electricity and are running low on food. 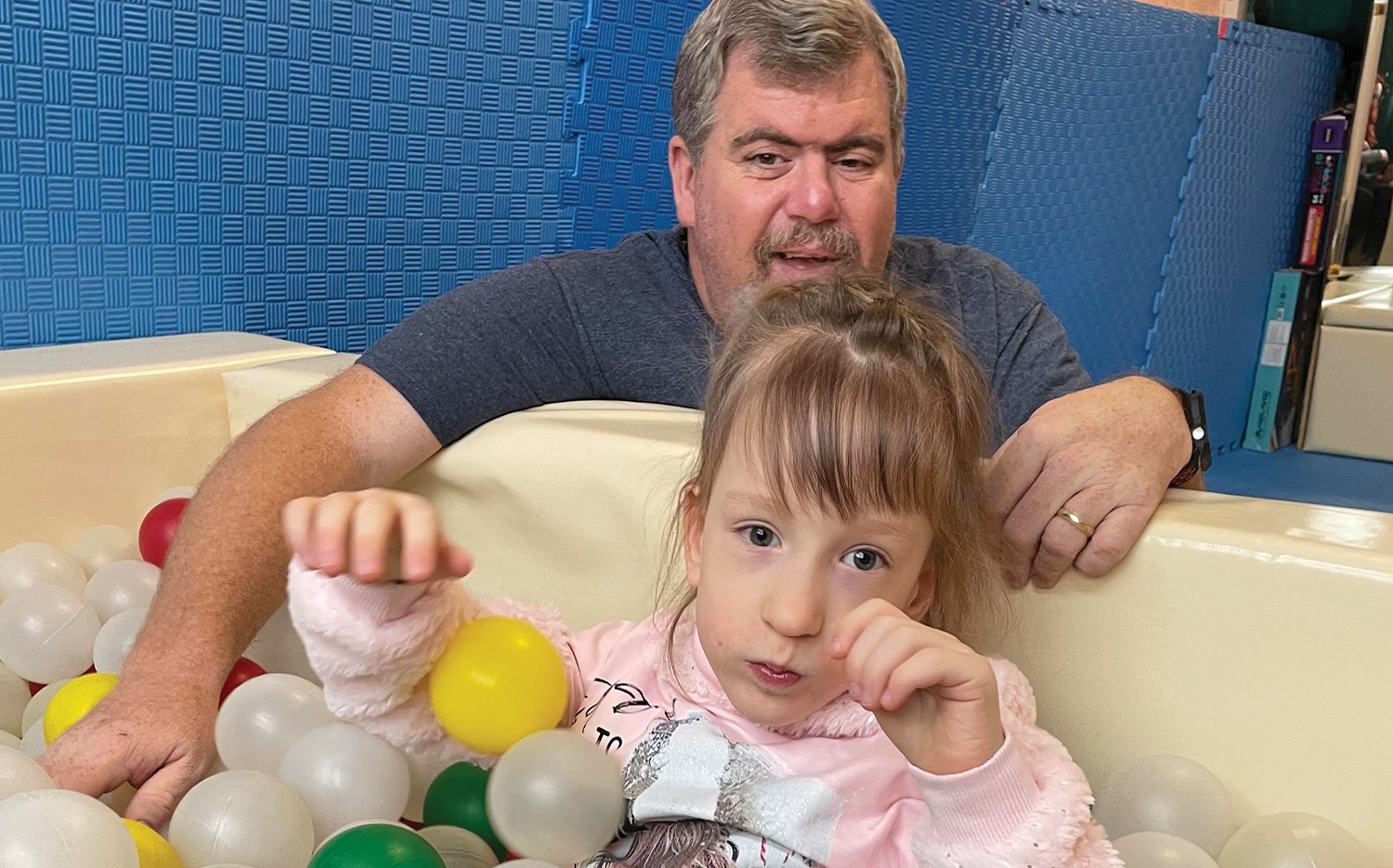 OTHER ORGANIZATIONS are celebrating the successful evacuations of Ukrainian children and teenagers after encountering multiple obstacles. Cyndee Knight, president of Hope Now, has been working nonstop from her home in Atlanta since the invasion began, coordinating the evacuations of young women in her orphan graduate program located in the central Ukrainian city of Shpola. She lived in Ukraine for 16 years and helped start homes for boys and girls who typically age out of the orphanage system at 14 or 15.

On March 3, she reported the safe arrival in Romania of nine young women in her program, ages 15 through 23. This was after several failed attempts to secure drivers for their two vans—most young women don’t own cars or have a driver’s license—and countless phone calls with her girls, who were “scared to death, panicked, and spreading terror on social media,” Knight said. She talked them through their fears and their priorities: “They said, ‘Wait, I need a selfie!’ I told them, ‘No, you really have to go. And don’t bring 20 pounds of makeup! You can buy more when you get there.’”

Since then, Knight has coordinated daily convoys of up to 50 women, children, and men who escort their families to the border before returning back home. Men under 60 and the boys who are 18 and older in her program are not allowed to leave the country due to a recently passed conscription law.

Knight is also concerned about the younger “social orphans” who were removed from their orphanage after the invasion began and returned to legal guardians in order to make room for refugees heading west. “I’ve been to their homes, and they are breeding grounds for disaster,” she said. “Alcoholism has destroyed the family structure.” 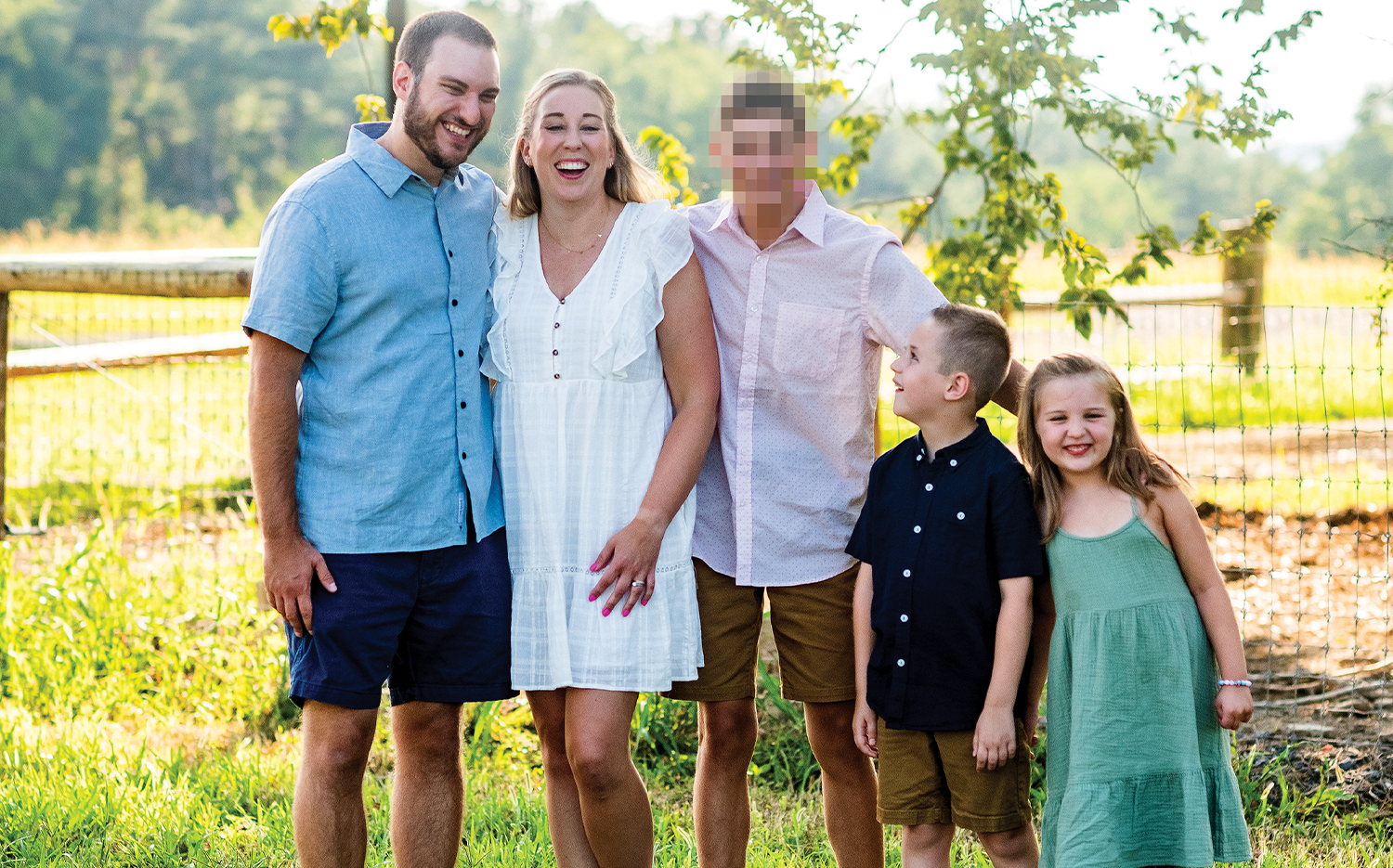 ANOTHER ORGANIZATION THAT FUNDS and operates a Christian and family-based orphanage in the village of Petrivske (30 miles southwest of Kyiv) successfully evacuated 150 orphans all the way to Germany. Ambassadors of Father’s House director of operations Luis Ruiz described the four-day journey as “miraculous.” Just days prior to the Russian invasion, Ruiz and founder Roman Korniyko decided to listen to the more urgent American news reports of an imminent invasion and start planning to evacuate their 48 orphans, ages 1 to 18, along with staff members. They estimated the total evacuation cost at around $27,000, and the next day they received an anonymous donation of $28,000.

They immediately went to work. After many phone calls they secured two large coach buses, but a nighttime curfew threatened to derail their Feb. 24 departure. Then, a team of security personnel offered to escort their convoy to the border, providing an extra measure of safety and the ability to bypass traffic jams.

Miracle No. 3 involved what Ruiz describes as providential timing: “So they have these two large coach buses. Korniyko did what any orphanage owner would do. He picked up more kids,” Ruiz told me. The convoy stopped at orphanages along the way, adding about 100 children to their group, and later learned that Russian troops took over one of the orphanages just hours after they loaded up their children.

“It’s just amazing to know it was the perfect timing in the middle of the night when they weren’t supposed to be traveling, that they were able to get out and also take other kids with them,” Ruiz said.

The border crossing into Poland took 12 hours, but the local McDonald’s provided free food for the hungry kids. And their German partners had already arranged for four buses to take them the rest of the way to Freiburg, Germany, knowing that Poland requires a nine-hour rest for bus drivers.

The kids are now sheltering in four different German refugee camps, and their team is researching ways to get them to the United States or elsewhere, a daunting task since most of the kids do not have passports or travel documents.

SOME OF UKRAINE’S OPRHANS would have a difficult time on such an arduous journey. Phil and Kristie Graves’ 6-year-old daughter, Bridget, lives in the southeastern region of Zaporizhzhia and has cerebral palsy, club feet, and some vision issues. The couple traveled to Ukraine in January for their SDA appointment and to visit Bridget. They expected to have their process finalized and their daughter home by mid-March but encountered problems with her citizenship: They found out Bridget is the focus of a high-profile surrogate case whose biological parents are from the United States.

Now they check their messages daily for news about Bridget’s orphanage. They use Google Translate to communicate with a nurse who bonded with Bridget during her time in the hospital and checks in daily on the orphanage. “I’m afraid that if Russia is successful in taking the whole country or just their region, we won’t be allowed to adopt her,” said Phil Graves, a pastor who already describes himself as a father of five kids, not four.

The Ruff family is also scanning regularly for texts from their son Sasha and updates on his city. He isn’t able to text when his orphanage retreats to the bomb shelter because the director removes their SIM cards to keep their group safe. His orphanage has not been able to evacutate.

The sorrow has seeped into the hearts of their younger kids, ages 6 and 8. When Jennifer Ruff and her husband decided to hang up their Ukrainian flag as a show of support, their kids returned home from school and, seeing the flag, asked with excitement, “Is Sasha coming home today?”

Ruff says she feels like it’s all part of a horrible dream: “It’s just so insane that you can’t wrap your mind around it. We were so close. We were just in Ukraine two weeks ago, and it literally eats me alive that I was just with him, and now there’s no way to get to him.”

Jill is a correspondent for WORLD. She is a graduate of World Journalism Institute and the University of Texas at Austin. Jill lives in Orange County, Calif., with her husband, two sons, and three daughters.