On the first day of March, several members of the Kyner family sat around their kitchen. Anna, 16, wore her blond hair in two braids and sat at a round kitchen table. High-school senior Noël leaned against a counter and talked about studying at community college while figuring out the best degree for pursuing missions work. Their goldendoodle lay sprawled out on the floor beside the table.

Yosi, the Kyners’ 12-year-old adopted son from Ethiopia, sat at the kitchen table too, eating a corn dog and pizza. Mihret, 15, also adopted from Ethiopia, arrived home from her job tutoring a 5-year-old Ethiopian girl in reading, math, and English. She brought leftover Ethiopian food—stewed chicken and flatbread called doro wat and injera—from the girl’s house. Mom Susan and the other Kyners rushed to grab some before it was gone. “Don’t take it all!” Mihret said.

The next weekend marked 11 years since the Kyners adopted Mihret and Yosi, and the family planned to celebrate with Ethiopian food from a restaurant in Denver.

A few weekends before that, the eight Kyners—parents Jim and Susan, plus the six biological and adopted children—found seats on sofas and chairs in their basement and grabbed blankets. The kids, ranging in age from 12 to 20s, ate popcorn, cake, and leftover Valentine’s Day candy as they started their weekly movie marathon in honor of Black History Month. That weekend, the family watched Green Book, Queen of Katwe, and other films.

Susan Kyner tries to include historical and educational movies for her four white and two black kids, like 42, about Jackie Robinson, and Gifted Hands, about Dr. Ben Carson. But she said her kids prefer Spider-Man: Into the Spider-Verse and Black Panther and ask, “Do we have to always watch movies that are about racism or that are sad or mad or hard or intense?” So Kyner looks for movies, books, and music with minority characters or actors that aren’t “about being black or about racism.”

Families like the Kyners became the subject of debate last fall during Supreme Court Justice Amy Coney Barrett’s confirmation hearings. Some said white parents who adopted black children—Barrett and her husband adopted two Haitian children—were inherently “not racist.” In response, Ibram X. Kendi, author of the book How To Be an Antiracist, tweeted: “Some White colonizers ‘adopted’ Black children. They ‘civilized’ these ‘savage’ children in their ‘superior’ ways of White people, while using them as props in their lifelong pictures of denial, while cutting the biological parents of these children out of the picture of humanity.”

Lots of commentators on the political left and right criticized Kendi for his comments. But critics have made similar arguments for years. In 2014 Rutgers Law professor Twila Perry wrote in The New York Times that in adoption discussions, “black families and especially black mothers are often stereotyped and denigrated, while whites who seek to adopt black children are valorized.” In 1972, the National Association of Black Social Workers said it took “a vehement stand against the placement of Black children in white homes for any reason.” 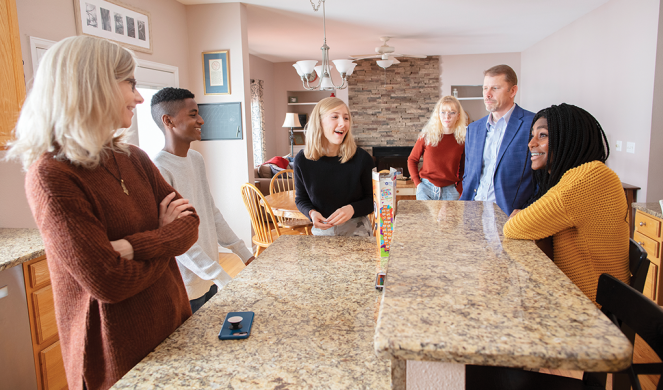 ONE WARM AFTERNOON in Louisville, Ky., Jaime Gray took her almost 2-year-old son Henry for a neighborhood walk. At the corner by their house, an elderly man stopped them.

“What is going on here?” he demanded. “Why do you have this black boy?”

“How much did you pay for him?” the man asked. “Why is adopting black children so popular?” Gray tried to be respectful but eventually told the man it was none of his business and walked on. Henry squeezed her hand, and her adrenaline pumped as she called her husband Tim. Months later she saw the man leaving a house on her street and realized he was their neighbor.

The Grays’ adoption agency had prepared them for such moments ahead of time. Gray had read agency-assigned articles and books on how to respond to scenarios depending on the particular comment, tone of voice, age of the child, and relationship with the person. When a friend asks a rude but sincere question, she might try to explain more. When someone at the grocery store makes a racist comment, it’s often better to ignore. Gray is still “shocked and saddened by strangers’ responses” to seeing a black child with white parents.

Years later Gray found Henry, 5, reading Abe Lincoln: The Boy Who Loved Books. Henry stared at a picture of a slave auction. “The kids can easily latch onto the horror of it all,” Gray said. “That is a little bit tricky to navigate.” Knowing they had talked about slavery before, Gray asked her son, “Why don’t you tell me what is happening?” Henry said that a man was buying those people “because they’re black.” Gray asked why, and Henry said he knew the law allowed white people to sell black people.

Gray said in those conversations she sees Henry putting together the pieces of what he has learned: “I don’t always want to answer the questions for him. I remember … wanting to see if he would tell me what he thought was happening.”

As children grow, their parents have the tough duty of preparing them to deal with racism they may face themselves.

Kyner remembers taking 10-year-old Yosi to Walmart. He had saved his money and picked out a pair of blue and white football gloves. They walked to the self-checkout line. Kyner paid for her items, then Yosi scanned and paid for his gloves. As Kyner gathered her bags, she noticed her son was holding the gloves, ready to leave: “I knew that I had to teach him that he, as a young black man, could not walk out of Walmart carrying those gloves in his hands.” She told Yosi to put the gloves in a bag and hold the receipt, concerned some people might view him suspiciously as a young black man. “I was tearing up as I talked with him,” she said. “He just took it in stride.” 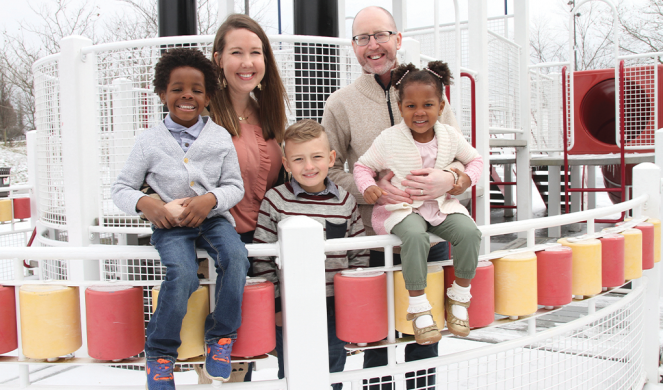 Tim and Jaime Gray with (from left) Henry, Jude, and Olivia at a park in Louisville Photo by David Harrison/Genesis

BILLY CUCHENS IS THE WHITE FATHER of four adoptive children, three of them black and one multiracial.

He says parents must balance an openness to talk about anything, including racial differences, while not focusing on those differences too much: “Being a good parent in a transracial family is just like being a good parent. It’s being a student of your child and understanding what it is that they need.”

Cuchens’ two sons share the same birth mother. As they grew up, their parents asked them if they wanted to see her Facebook page. One declined, but the other enjoyed scrolling the page, finding the family resemblance in her selfies and pointing out the foods he also liked in the pictures of her dinners.

Cuchens and his wife adopted Isaac, who is black, now a high-school sophomore in Dallas, from foster care as a baby. “I’m never going to have the same life experiences as my dad or my mom,” he said. “But I can always learn from what they have to teach me and apply that to my life.” When former San Francisco 49ers quarterback Colin Kaepernick began kneeling in 2016 during the national anthem to protest police brutality, Isaac defended Kaepernick while his mom disapproved. Last year the family had more discussions about the merits of the Black Lives Matter protests. Isaac appreciates that even when they disagree they get along: “‘OK, you have it your way, I’ll have it mine. Want to go out to lunch?’ I wish the world was a lot more like that.”

TRANSRACIAL ADOPTION can leave some children feeling isolated or confused about their heritage.

Tara VanderWoude’s American parents adopted her from South Korea in 1981, when she was a year old, and kids in their hometown of Grand Rapids, Mich., teased her about her eyes. They playfully karate-chopped her or pretended to speak in an Asian language. She didn’t know who to talk with as she processed the experiences: Her family—including her brother, also adopted from South Korea—didn’t discuss them. She felt from peers “this pressure to accept some of it because, ‘Come on, I have this greater life,’” she said. She didn’t talk to many people about her confusion because she wanted so badly to assimilate. Instead, VanderWoude worked for good grades and to excel in extracurricular activities: “My goal was to be as invisibly Asian as possible.”

The chance to be around people who looked like them helped some adoptees feel at home. Tiana Hawver, 49, who is black, says her white parents moved from Dansville, Mich.—a rural community outside Lansing whose residents are 84 percent white—to Remus, Mich., which has a larger population of black residents. Her mom learned how to cornrow Hawver’s hair and sewed dashikis, an African shirt. In Remus, Hawver went to school with white, black, and multiracial kids: “Having some connection with people who looked like me in my growing up was so huge.”

All the adoption agencies I interviewed said parents should make sure their kids have friends and positive role models who look like them. That could mean moving to a new area, like Hawver’s family. For the Kyners in Colorado Springs, that means being intentional with movie nights; finding diverse music, books, and decorations; praying for and intentionally pursuing black friends; and talking to their kids about which church and school they feel comfortable in.

The family’s bookcases feature books like Let the Circle Be Unbroken by Mildred Taylor alongside SAT prep manuals. In their kitchen, a bookshelf displays figurines of giraffes, zebras, and a hippopotamus above small round baskets from Ethiopia. On their bulletin board are pictures of the two Ethiopian girls the family sponsors.

Alicia Olsen, executive director of social services at Nightlight Christian Adoptions, explained why parents should care about activities like these: One girl told her adoptive parents her dream was to work at McDonald’s because that was the only place she saw other black people.

WORKING THROUGH such challenges can strengthen families. Jaime Gray said these conversations remind her of her own limitations: “There are burdens for our kids’ hearts that the Lord is going to have to care for.”

Susan Kyner said transracial adoption has made her family more sympathetic to others: “I hear the way my kids talk about situations in culture or on the news or even things that happen at school, and I hear them being more sensitive,” she said.

Tiana Hawver sometimes struggles with feeling like an outsider or worrying close friends will leave her, like her birth parents did. But she takes comfort in her faith, which she watched her adoptive parents model consistently. Images of her dad praying and studying the Bible early each morning are etched in her memory: “I’m really thankful for how God was watching over me from the beginning, with placing me in a Christian family … seeing my parents model their faith and taking that on as my own. That’s really gotten me through a lot of this stuff.”

—This story appears in the March 27, 2021, issue under the headline “Families red and yellow, black and white.”